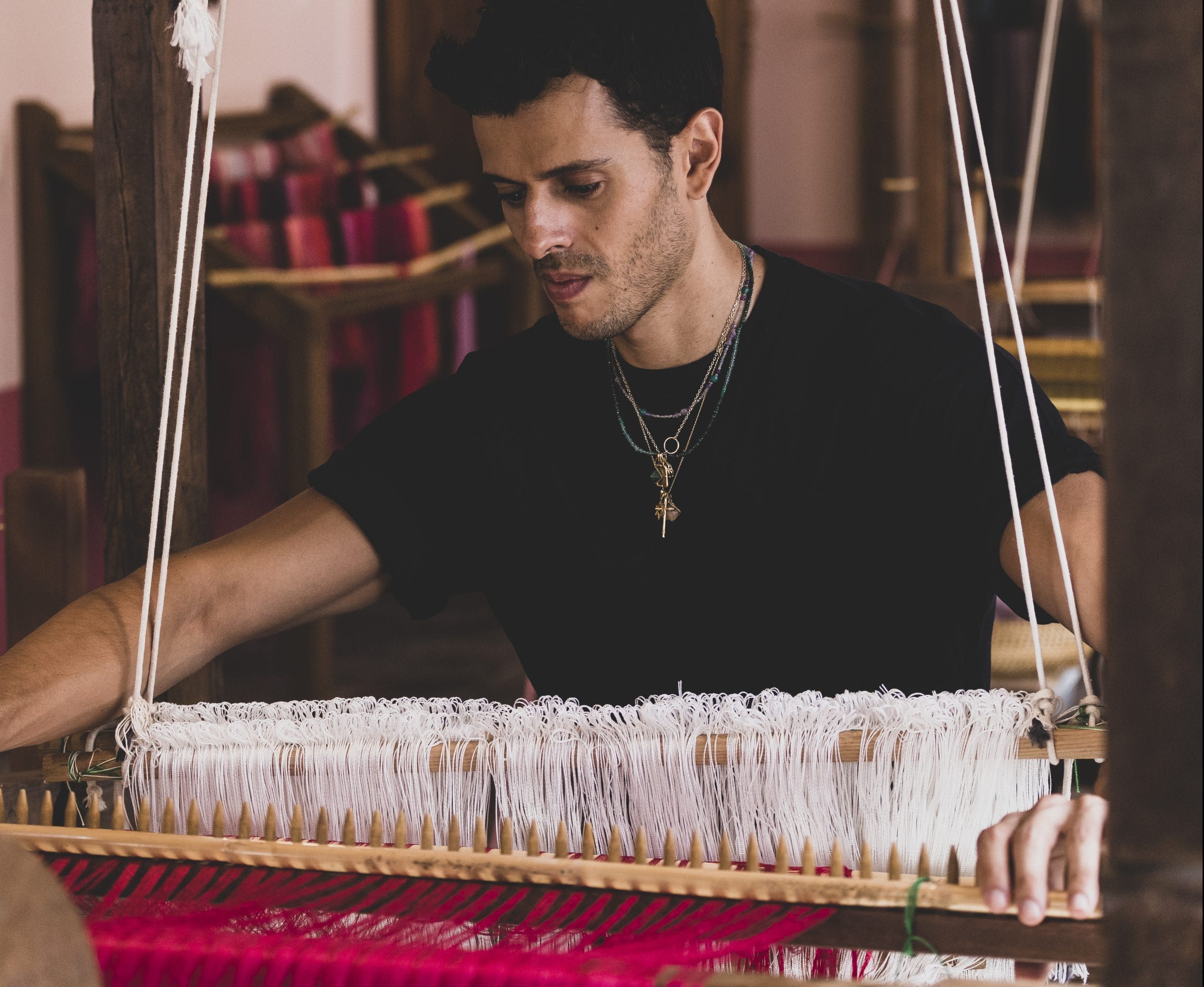 Andrés Acosta: The Story Behind My Sustainable Look For The GCFA, Italia 2020

Image: The production of El Paso silk is a native craft from Acosta’s hometown of La Palma in the Canary Islands, Credit: Andrés Acosta

We spoke to designer Andrés Acosta to find out more about his El Paso silk look, worn by model Marta Ortiz.

Andrés Acosta’s intricate gowns have been bringing a touch of mysticism to the green carpet for the past two years, worn by the likes of Petra Němcová and Cristina Pedroche.

At once earthly and other worldly, the Spanish designer’s looks hark back to the craft traditions of the Canary Islands where he grew up, charging them with an ethereal energy. Carefully embroidered constellations of lead-free crystals have evoked heritage skills from his hometown of La Palma for his past Green Carpet Challenge looks, while GOTS-certified fabrics ensure a lower strain on the world’s natural resources.

This year, Acosta is again returning to his roots with a gown made from El Paso silk. Since the 16th century, this heirloom fibre has been created through a fully manual production process in La Palma: the last place in Europe where a technique of its kind exists. “The situation we are living in nowadays has made me look inside myself, diving into my essence,” says the designer poetically, explaining how his heritage has influenced the sustainability of his work today. “Going to my origins takes me to my destiny.”

We caught up with Acosta to learn about his creation, and why preserving tradition is so essential to building a future where the Earth and its elements are respected.

It’s a symbol of the effort and commitment of everyone who is part of the fashion industry. It is a very inspiring movement, because it creates a feeling of belonging that inspires and invites you to work in a conscious way.

Can you tell us about previous Green Carpet Challenge looks you have created, the inspiration behind them and the story you wanted to tell?

It was Petra Němcová who challenged me to participate in the GCC for the upcoming Cannes Film Festival, just after I showcased my second collection in Paris in 2018. It was a collaborative creative process, as it usually is with my atelier clients. We wanted a very simple gown, allowing her divine presence to be the protagonist. The meaning of white was important, representing purity, cleanliness, and spirituality, so we chose a very special GOTS-certified satin crepe. The details of the dress were really subtle; we embroidered the cuffs and belt with galaxies of purple and white lead-free crystals. It was a gorgeous dress but also a beautiful lucky charm charged with mysticism and magic.

For the second GCC look, I attended the GCFA at La Scala together with Cristina Pedroche. On this occasion it was a tribute to my roots and to the aborigine women of my homeland. It also represented my commitment to sustainability because it was basically the debut of my first fully sustainable couture collection, named Awara.

Can you tell us about the look you have created for this year’s green carpet?

This year’s GCC look is inspired and named after Alnilam: a blue star in Orion´s Belt, known as the gateway to the Kingdom of Heaven. The crafts of silk production and hand embroidery are present in my homeland, which is also a Starlight destination where you can observe the universe in its full splendour. I wanted to connect the tradition of the silk with the galaxies beyond, with the purpose of reminding us how by taking care of your roots, you can reach the stars.

I usually embroider large surfaces on my dresses, which allows me to include a special part of my universe in each piece. For this special third time, I used lead-free crystals combined with repurposed pearls from vintage pearl necklaces, since the name Alnilam comes from Arabic and means ‘pearl necklace.’ The fabric we chose is natural artisanally loomed El Paso Silk; the production of which has officially been declared as an Asset of Cultural Interest by the Government of the Canary Islands. The inner lining is OEKO-TEX® certified silk repurposed from my first collection, and the thread is GOTS-certified.

What is El Paso silk, and how have you chosen to use in it your design?

We chose to repurpose some silk foulards produced in my hometown and transform them into an evening dress. El Paso silk has an exceptional value, mostly because of the time spent to produce it and the use of historic looms from past centuries, but also because it still uses the ancient techniques of the time. The silk is one of the oldest trades practiced by the families from all over the island through history, since the Castilian crown conquered the island in the 16th century. The whole silk creation process has created an industry there, thanks to the silkworm breeding, the extraction, the preparation of the threads, the dying process, etc. I wanted the world to know that there are still natural and artisanal ways of producing exquisite fabrics.

Your work frequently harks back to your upbringing in the Canary Islands; how does this look reflect those values?

My obsession is maintaining my essence, keeping it intact. The Canary Islands are a multicultural melting pot and I feel proud of that melange. That precise mix that has always enriched my homeland´s culture is full of inspiration, and I feel the need to go back to my origins in order to find myself. I truly feel that giving value to my homeland is giving value to my essence.

Why is it so important to you to use fashion as a way to preserve ancient handicrafts?

I worked for ten years in the fashion industry as a stylist and fashion director for a magazine before starting my professional career as a designer. During that decade I could foresee that things were getting to a point of no return, that the rhythm was becoming hectic and nonsensical. This was until I went to Paris Couture Week, and I could touch and feel those creations. It was then that I realised that those gorgeous handcrafted gowns were much closer to me and to the work of all the women that I remembered in my hometown when I was a child, tailoring everything artisanally and embroidering by hand.

Fashion is a way of expressing who you are, is a very attractive and marketed industry with millions of followers all around the globe. If we use this power wisely, and we support our creations with important conscious messages and actions for the consumers, we will be on a path to change. Fashion has always been used to manifest complaints and warnings about what is happening around the world; the catwalks have long been filled with political and social messages and it has always made an impact.

For the designers, producing consciously is an open door to giving something back to Mother Earth and the life it supports. Being part of such a polluting industry, this is much more than a responsibility. In the beginning, what was going to be a big challenge for me turned out to be a whole world filled with many possibilities to create in a sustainable way. That’s why I think all designers should challenge themselves to produce consciously in order to create a bigger demand of sustainable supplies. This way we would be coming full circle, giving the consumers better options to choose in a conscious way.

Timeless Style: Finding The Perfect Vintage Gown for the GCFA, Italia 2019
A Day at the Atelier: The Craftspeople Behind Purvi Doshi
Creating a Circular Beauty Model with Ace of Air
The Art of Weaving in Bahrain