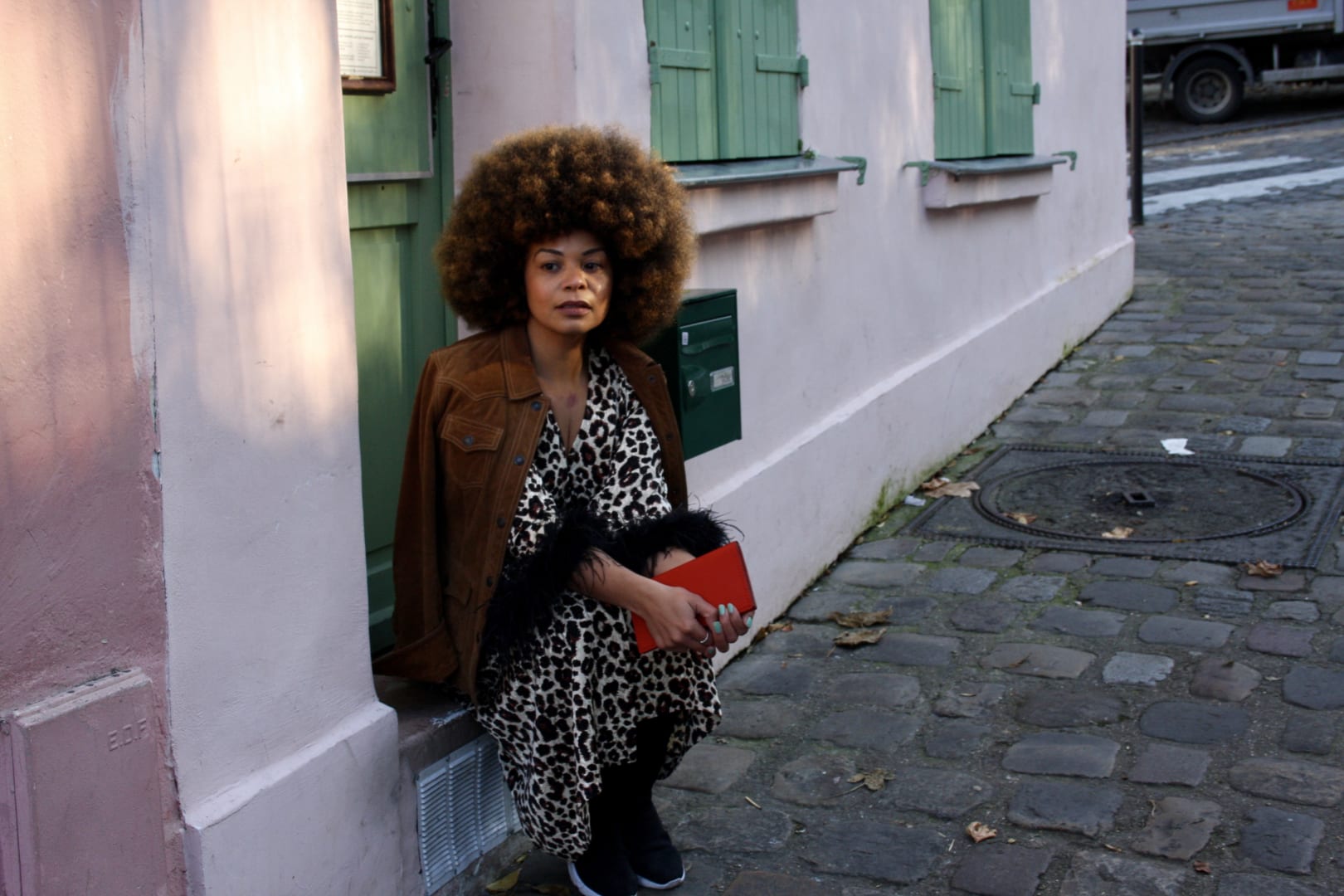 Beating the Urge to Therapy Shop

Shopping can seem like a harmless pick-me-up when you’re feeling blue, but what are the emotional and environmental costs of retail therapy? Marketing and retail consultant Emma Slade Edmondson investigates why consumerism boosts our mood, and suggests some more fulfilling activities to do instead.

The above is the exact definition taken from the actual Cambridge Dictionary Online. And as if it wasn’t enough to make us all feel a tiny bit silly (especially as everyone has likely been there), they have added insult to injury with the example script. Yet much like an ex-boyfriend, come January the holiday cheer is suddenly over with what feels like very little explanation. We’re left pondering how we’re going to motivate ourselves, and where to start with sorting out the mess left in his wake. Overwhelmed by the fresh expectations and maybe a tiny bit depressed by how everybody else seems to have it together (at least on the outside), we often start the new year feeling vulnerable to say the least.

Enter the January sales. A little shopping therapy is a tempting way to take the edge off. It might be just what you need; why not give yourself a break, put that tax return on hold and head out to the shops…

Stop right there. You know as well as I do that using retail as a form of therapy isn’t a thing. It wasn’t in the 80’s when the term was first coined by the Chicago Tribune  and it’s still not ‘a thing’ now. In fact, in 2001 the European Union conducted a study finding that 33% of shoppers surveyed had a “high level of addiction to rash or unnecessary consumption” and that it could even reasonably be claimed that retail therapy exists on a spectrum with ‘shopping addiction; (compulsive buying disorder). 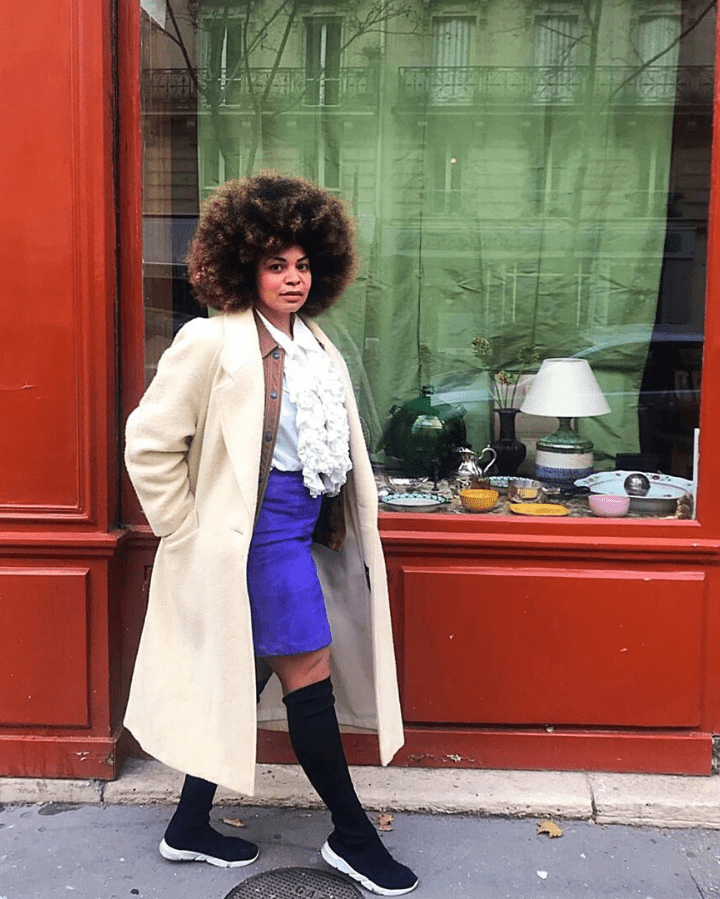 So let’s call retail therapy out for what it is: another crutch we use as a pick me up when we are feeling low. A temporary hit of endorphins that doesn’t involve a treadmill. It sounds great to me too, but the problem is that we often use it to distract ourselves from a void we need to fill with something instantly gratifying. A Greenpeace survey showed that around 50% of shoppers report that the buzz wears off within a day, and it is often followed by a hangover of guilt and shame. People report feeling bad about their useless purchases, realising that shopping does not lead to increased long-term happiness.

Alongside the negative psychological connotations of using shopping as a ‘therapeutic’ activity, there is the idea of promoting consumerism without consideration. Overproduction and overconsumption are unsustainable for both us and the planet; the more we impulse buy, the more our wardrobes swell with future waste destined for landfill and fated to cause further harm to the environment.

With the personal and environmental issues of retail therapy considered, one thing is for sure; it’s not the feel-good activity that we are yearning for. Personally, I believe that fashion (and whether people are compelled to behave thoughtfully with it) are closely linked to the psychology of how we feel about ourselves. Of course, this in turn is to do with the food we consume, our health, mindfulness, self-esteem and of course access. And while January may be dark, wet and a bit gloomy but there are plenty of ways to really blow the cobwebs away, feed the soul and to avoid the compulsion to shop the sales. Here are a few ideas to tap into all of the good feels that you’re craving. 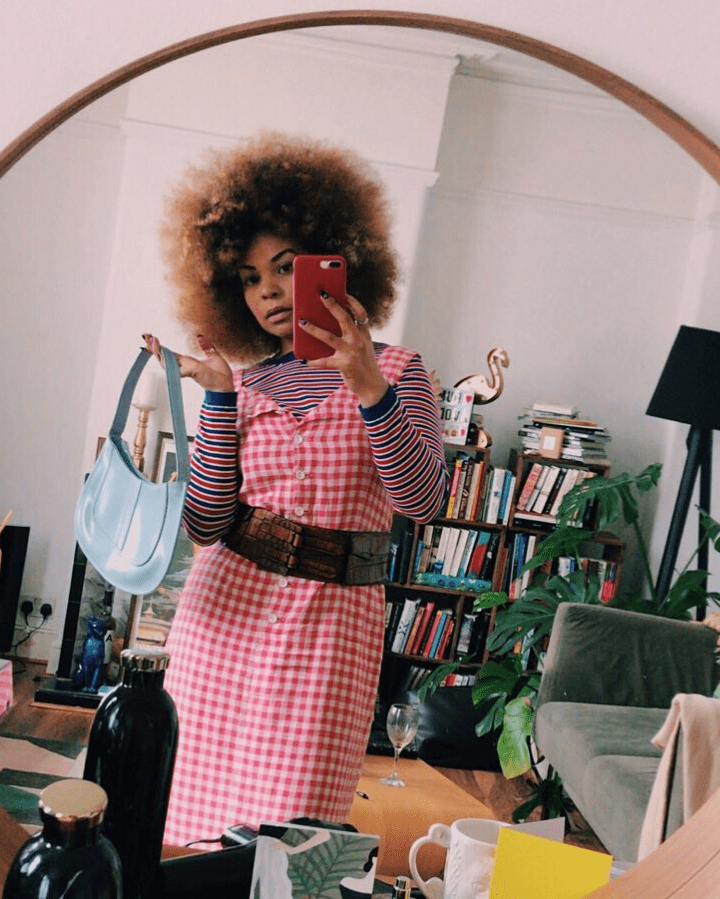 Indulge in some holistic healthy downtime

Many of us will be feeling a little lethargic after the festive indulgences, but often there’s no let-up in the beginning of a new year to reflect this; instead we are thrust back in at full pelt. It could be time to refresh and reset the body with some food to replenish and some scheduled time away from digital distractions.

Taking time to feed yourself and your loved ones can be such a grounding and satisfying activity. Recently I’ve been getting stuck into spending my evenings away from the TV and my phone and instead cooking recipes from Rachel Ama’s Vegan eats. I recommend her recipes for food that not only makes you feel great but that is hearty and full of interesting favour. Perfect for this time of year. If you’re in need of a more thorough re-centering, Jasmine Helmsley’s Cleanse and Reset is great way to get some much-needed self-care. It recommends taking a break the ayurvedic way via a three-day respite, and it’s absolutely nothing to do with raw foods and juices. It’s all about comfort food that’s light and digestible, but crucially tasty. This cleanse aids an improved sense of taste, digestion and encourages mental clarity. It’s about slowing down, retracting from social, digital and food stimulation and treating your body to time to regenerate. 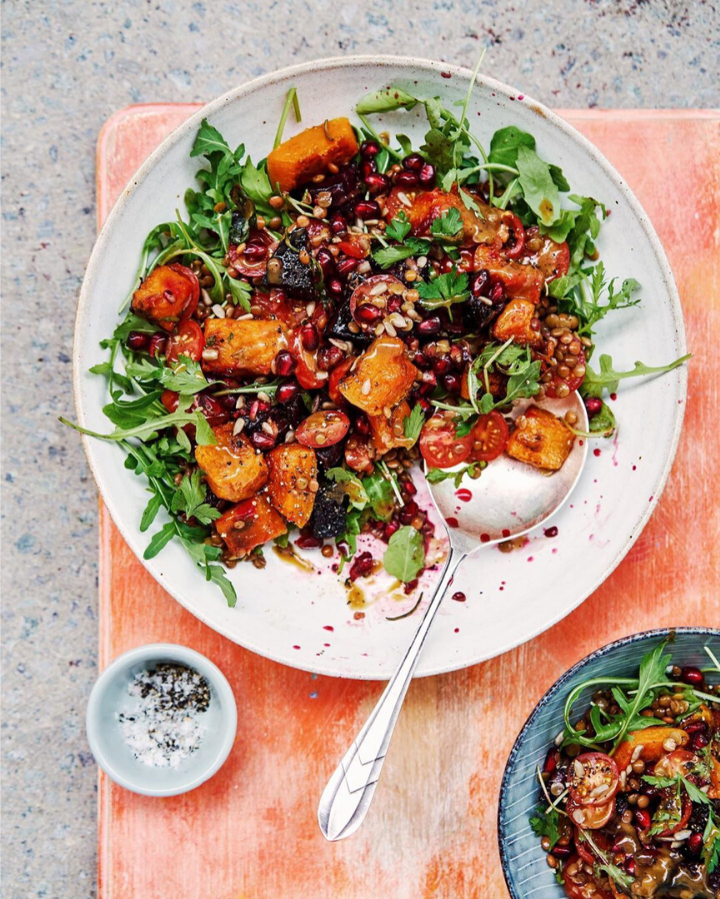 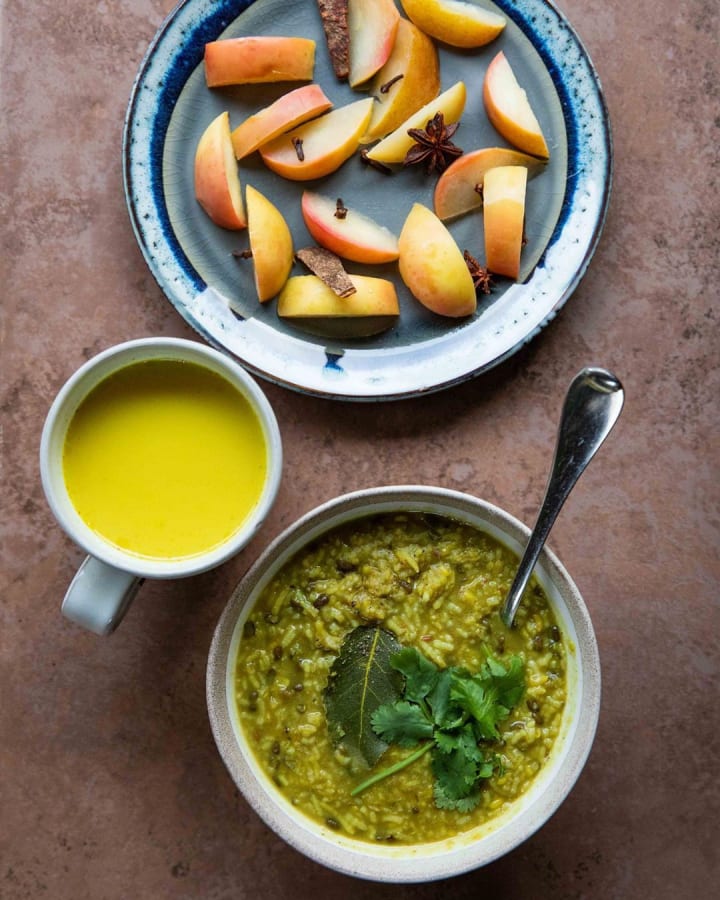 Once you’re back on Instagram after a break, try following some accounts that will help you to feel better about yourself, not worse. Here are my personal favourites for inspiration and motivation around selfcare and holistic mindfulness across all areas of your life

@notbuyingnew for countless ideas and tangible examples of how to utilise the clothes you already have to their fullest extent.

@tallyrye for a positive approach to eating that rejects diet culture and promotes intuitive training and caring for yourself through January.

@foodandpsych is a chartered psychologist that combines psychology, brain health and nutrition to help you thoughtfully enrich your life.

@thissarahpowell is a self-celebration coach extraordinaire. Follow her for reassurance and practical tips and for information on her online classroom sessions.

@thy.self for inclusive monthly wellness events and a community that will help you practice self-care in a tangible way. 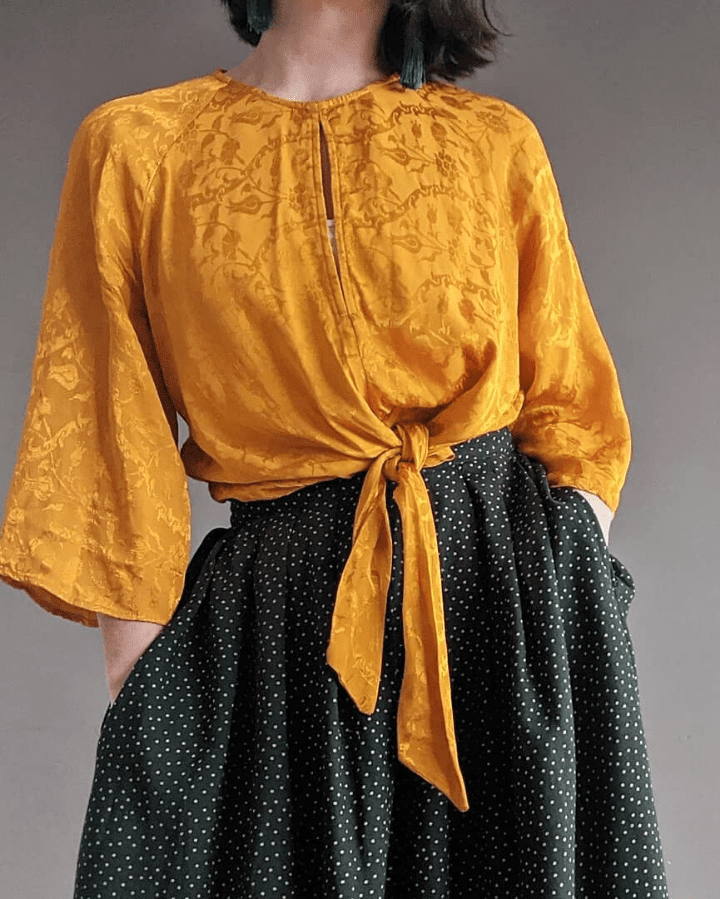 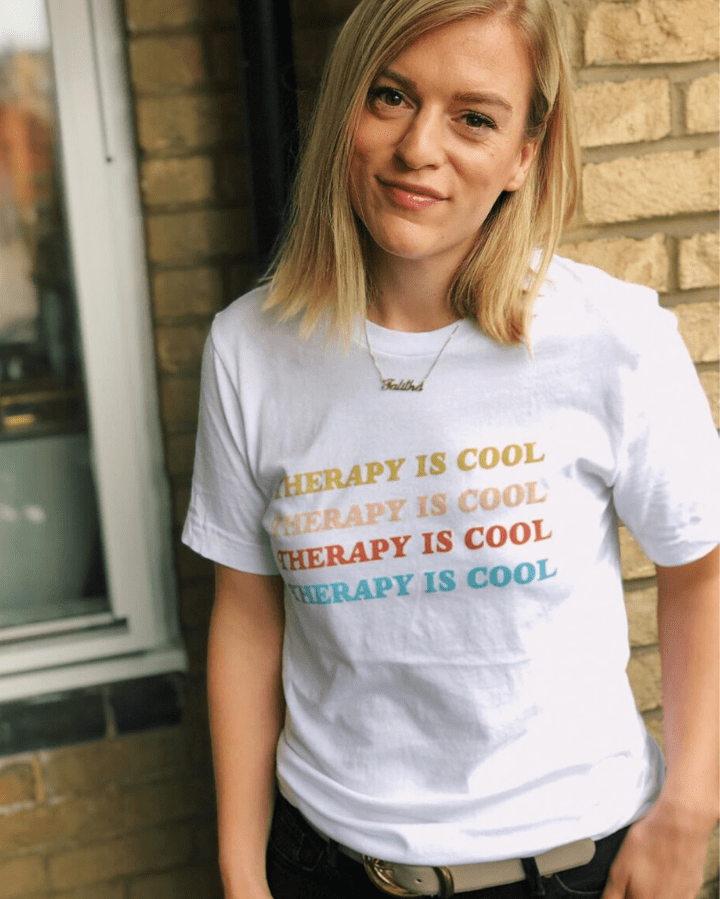 Make a personal pledge to commit to thoughtful fashion

If you’re feeling the urge to shop the sales for fashion it could be time to revisit your own wardrobe with fresh eyes. Spend some time getting everything out and revisiting what you actually have. Wear dresses as skirts or tuck dresses into skirts to fashion them into tops. Experiment with layering – I guarantee you’ll be able to create fresh looks from your old clothes if you can get into the right headspace.

If you’re really in need of some ‘newness’ arrange a swap session with your friends next time you’re planning a meet up. Get everyone into a WhatsApp group and share with them the items you’ve had your eye on to see if anyone has something similar that they could lend you.

If you really really feel that you need something new, then it does make sense to take advantage of the sales. But before you buy, ask yourself questions that will help you to build a healthier relationship with your purchases: 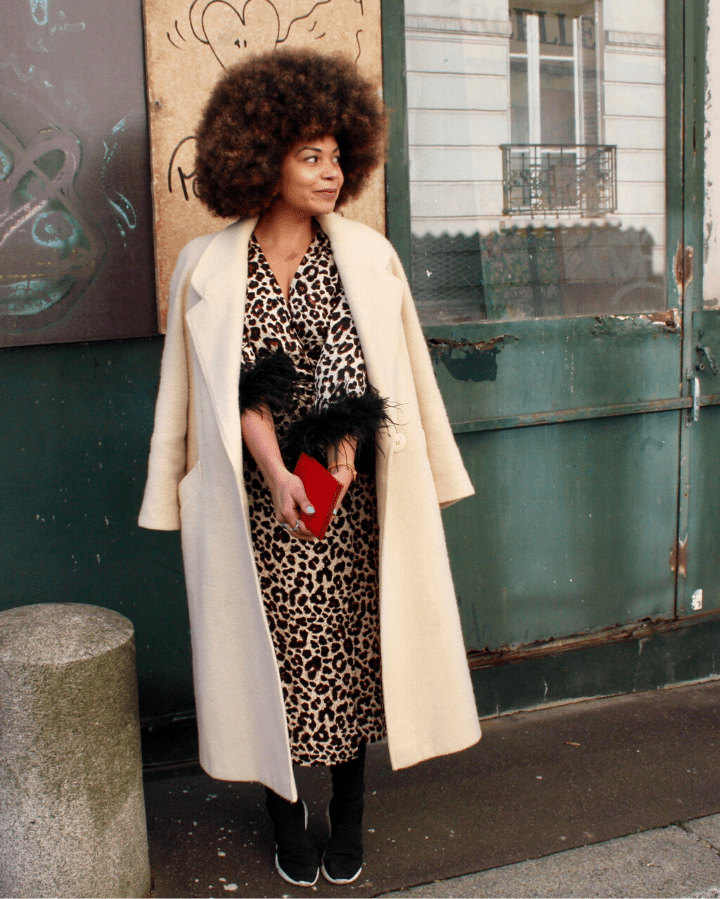 If you do want to invest, look for subscriptions with people and the planet in mind that can really set you up for the year and put a do good, feel good spring in your step. Instead of looking to buy a piece that reflects a current trend or print in the sales consider setting up a rental subscription such as Onloan that will see you get your forward fashion fix on a monthly basis while keeping clothes in circulation.

Beyond fashion, you can also subscribe to Oddbox save misshapen or surplus vegetables from landfill and having them delivered to your door without any single-use plastic in sight; last year they saved 1,537,022kg of fruit & veg from going to waste. You could also opt for recycled toilet paper and save the trees by subscribing to Who Gives A Crap. Your toilet paper will be delivered right to your door and better yet 50% of the profit is donated to help build toilets for those in need.

See Emma Slade Edmonson’s tips on how to make the most of the clothes you already own.

See how running can help your mental health.

Breakfasts to Brighten Up Your Morning While Working from Home
Come Dine With Me: The Climate Edition
Life As I Know It: Zara Williams
How To Get Started With Plastic-Free July
Fashion