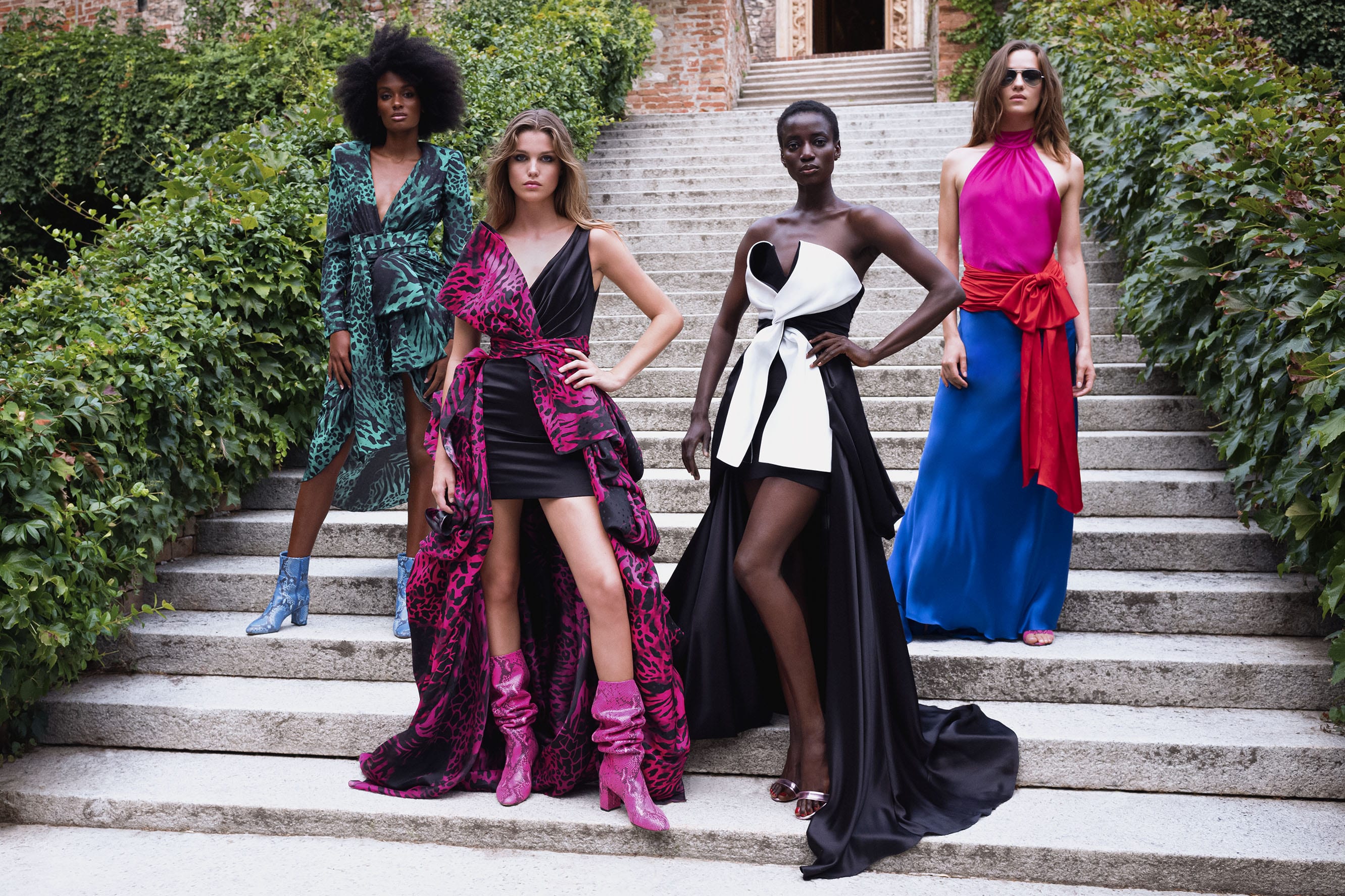 Image: SS21 is Redemption’s most sustainable collection yet, while containing some of the brand’s most vibrant and colourful looks too, Credit: Redemption

We spoke to Bebe Moratti, the designer behind Redemption, to find out more about his two looks worn by Alexis Ren and James Turlington.

Italian fashion brand Redemption is as much rock and roll in its ethos as its aesthetic. Just as the likes of Bob Dylan and Iron Maiden once tapped into the cultural licence of music with their anti-war anthems, creative director Gabriele ‘Bebe’ Moratti has instead turned to fashion as a vehicle for social good, donating 50% of the label’s profits to charity.

Having first participated in the Green Carpet Challenge with a look for Petra Němcová in 2018, this year Moratti took his trademark rock-inspired style to the green carpet with models Alexis Ren and James Turlington. Both wore pieces from previous years’ collections, helping to dismantle the stigma around ‘last season looks’ in favour of timeless designs that can be worn over and over again.

“Would you tell the Rolling Stones that Exile on Main St. is an ‘archive’ album?” Moratti jokes, on just one of the occasions in which he turns to his passion for music to highlight the flaws within the fashion system. It becomes clear that the rock and roll undercurrent is something that goes beyond his designs, forming the root of the brand’s approach to sustainability. “Rock and roll is beautiful and tough, and it is socially aware in its best iteration. It’s an attitude; it’s how you wear what you wear, and not really what you wear.”

We spoke to Moratti about the deeper message behind the chosen looks for this year’s digital carpet, the brand’s new ‘Re|Set The Future’ sustainability strategy, and why seasonal trends have no place in fashion’s future.

What does participating in this year’s Green Carpet Challenge mean to you?

It really is an honour to be part of such a momentous occasion. I have great respect and admiration for the other brands and people involved, and to be considered in a category worthy of being part of it is an amazing thing for us. Yet to be completely honest, it’s also kind of bittersweet. You feel like you are part of something important, but on the other side, you feel like that should be the norm. Personally, I think that everyone can be the best version, dress-wise, of themselves without something that is brand spanking new and pays very little regards to the environment.

Could you could tell us the story behind the looks that you put together for Alexis and James for this year’s digital green carpet?

James Turlington’s suit is made from velvet embossed with the classic rose motif. For me, the rose represents the very definition of Redemption: trying to find how life can be beautiful through hardship, and through pain and through difficulty. That’s what we have tried to stand for since the beginning, when we decided to give 50% of the profits to charity and to collaborate with NGOs.

Alexis’ look is from one of three heavy metal collections I did. It’s a very pacifist genre of music. Iron Maiden wrote many songs denouncing the brutality of war. Metallica, inspired by Hemingway’s ‘For Whom the Bell Tolls,’ wrote ‘One,’ another song that speaks against war, explaining the human tragedy and suffering that it leaves behind. So, anything that is worn out of the trilogy of the heavy metal collections feels very personal to me.

Why did you decide to choose archive looks for this year’s green carpet?

I think the inherent issue with fashion is that we stopped considering it as a form of art, and we started considering it as something that has to be consumed in a very short period of time. One thing that we should get rid of is ‘last season.’ I’m the same person designing it, with the same people, with the same love, with the same devotion. How can all that passion be last season? To me, there is no obsolescence to what I do. It takes the same processes, collaborating with people that I love collaborating with, the patternmakers and the seamstresses, and my creative team.

So, I reverse this question into why do we keep saying ‘archive look’ or ‘last season look’? It’s a look by Redemption, and whether it’s from the first collection or the last one, if that attitude resonates with you, then it’s timeless.

How does this look, or the concept of re-wearing some of the key principles within your newly launched ‘Re|Set The Future’ strategy?

Redemption was born out of the idea of trying to do things in a different way. Hopefully someone will take notice of this look and follow suit, knowing that there should not be a concept of last season, archive or something you did back in the past.

Since we have had the possibility of collaborating with Eco-Age, and having worked together on this strategy, everything is clearer to us. At the beginning we had more of a social sustainability model, and then throughout the time we realised that we were probably leaving too much of an environmental impact behind us. We realised that if we wanted to be in a mindset of trying to get better every day, we needed to partner up with someone that had the expertise. So the strategy came about and it really helped us set goals that also have a timeline and that we can meet together.

What other steps is Redemption taking to lower its environmental impact, beyond the Green Carpet Challenge and going forward?

Research. Lots of research into the materials that we’re using. We have also launched Redemption Athletix, which aims to be a fully sustainable, high-performing athletics brand. In the past collection we used recycled polyester and recycled lycra, which are certified, but still use plastics. Every time you wash them, microplastics go into the ocean and they are even getting absorbed in our bodies. So, we’re trying to find a way to do things with natural materials, such as bamboo, or specific types of cotton. Those are the steps forward that we’re trying to take, and the whole idea is to take them, then to communicate them and share them with other brands so that we’re not the only ones to do it but it becomes industry standard.

How do you see the future of the industry involving? What direction do you think fashion needs to be moving in?

Every small brand right now is part of a system that was created by the giants before us, which are either the Italians from Valentino to Armani and Versace, or the big French brands from Dior to Saint Laurent, and even before that, Chanel. These brands did not create this amazing system of desirability and artistry and artisanry through pushing product and novelty. Imagine if someone went into Valentino’s showroom in the 1960s and told him ‘You know what? You already used that red last season.’ Now we would not have the Valentino red. Or if someone told Coco Chanel, ‘I already have that jacket in store from last season, I need something new.’

If you had one piece of advice consumers looking to adopt a more sustainable approach to fashion, what would that advice be?

Stop buying things you don’t need. It’s been embedded into our brains over the past 20 to 25 years that we have to constantly be upgrading what we already have. When people say shops like Zara democratised fashion, I disagree. We dressed well even before Zara, we just bought less. We didn’t have to walk into a store and walk out with seven bags. That’s not democratising fashion – that’s a quick fix of dopamine from buying things that you don’t need, just to feel better about yourself. Let’s go back to feeling better about ourselves, for the things that matter; friendship, family, and self-worth.

How do you think fashion can be a force for good in the world?

The reason why I’m in fashion is not because I’m a particularly fashionable person. It’s because I think that fashion is the right place, at the right time, to really make an impact and change the world. It’s one of the biggest polluters in the world, it’s one of the largest employers in the world, and it communicates to a vast, vast, vast number of people. So, if we employ across the different layers of fashion in an equitable way, we can make a difference now.

The first thing is to be ethical with your employment. The second one is to reduce waste; tell your consumers to buy less, use materials that you know are not toxic when they end up in landfills. Third, use your platform to communicate something positive that you believe in, whatever that is; women’s rights, LGBTQ rights, or environmental issues. These three elements tell me that fashion, if it wanted right now, could create a gigantic impact immediately.

A Journey From Slacktivism to Activism
Livia Firth in Conversation with Naomi Klein: Our Marshall Plan for People and Planet
Beauty with Purpose: How Rahua Is Preserving The Rainforest
Is Your Clothing Destroying The Rainforest? Here's How To Find Out
GCFA2020