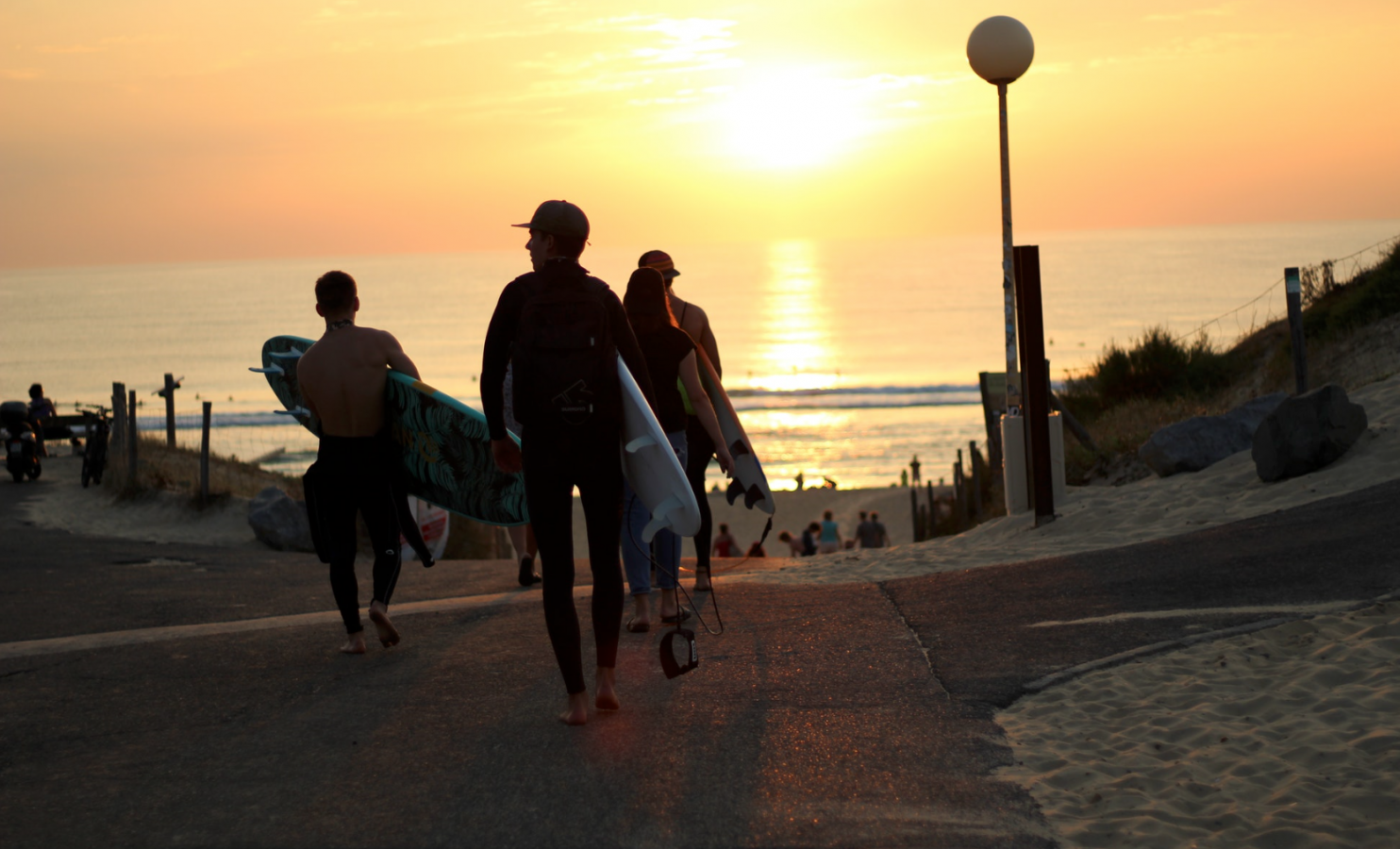 Jasper Baines takes us on a tour of Europe’s most sustainable surf spots.

Dreary, grey, skies make everyone’s minds wander to the last time they felt sun on their back. An escape to the coast calls, but where to go? Why not check out some surf spots as a potential holiday destination? Some of these places are so close, you don’t even have to fly (staycation anyone?) so no need to increase those air miles. Furthermore, the fact that so many surf destinations are increasingly integrating sustainability as a key aspect of the whole experience, you can definitely travel with a good conscience. And score some waves as well. Perfect…

Check out this guide for some spots, for all levels!

The rocky Portuguese coastline was thought to be the end of the world by medieval Europeans, and it’s easy to feel that same wonder staring into the vastness of the Atlantic. Located on this coast 2 hours north of Lisbon is Peniche. Lauded by many for its year-round wave and weather consistency, wanderers are also drawn by its thriving nightlife and culinary culture. There is a myriad of surf breaks, with the calm, beginner-suited waves at Praia do Baleal contrasting with the firing, hollow peaks of Peniche’s most famous wave, Supertubos.

You could stay in one of the Bukubaki eco-resort treehouses, which are nestled amongst the trees and bathed in the cleansing salt air of the Atlantic. With the help of the Portuguese authorities and EU sustainability grants, Bukubaki’s treehouses are constructed out of sustainably-sourced wood, and were erected without felling any healthy trees in the area. Solar energy powers the resort, and waste is treated with a biological septic or composted. The restaurant offers a variety of vegan and veggie options, with ingredients freshly picked or locally-sourced.

A perfect blend of surf and sustainability! 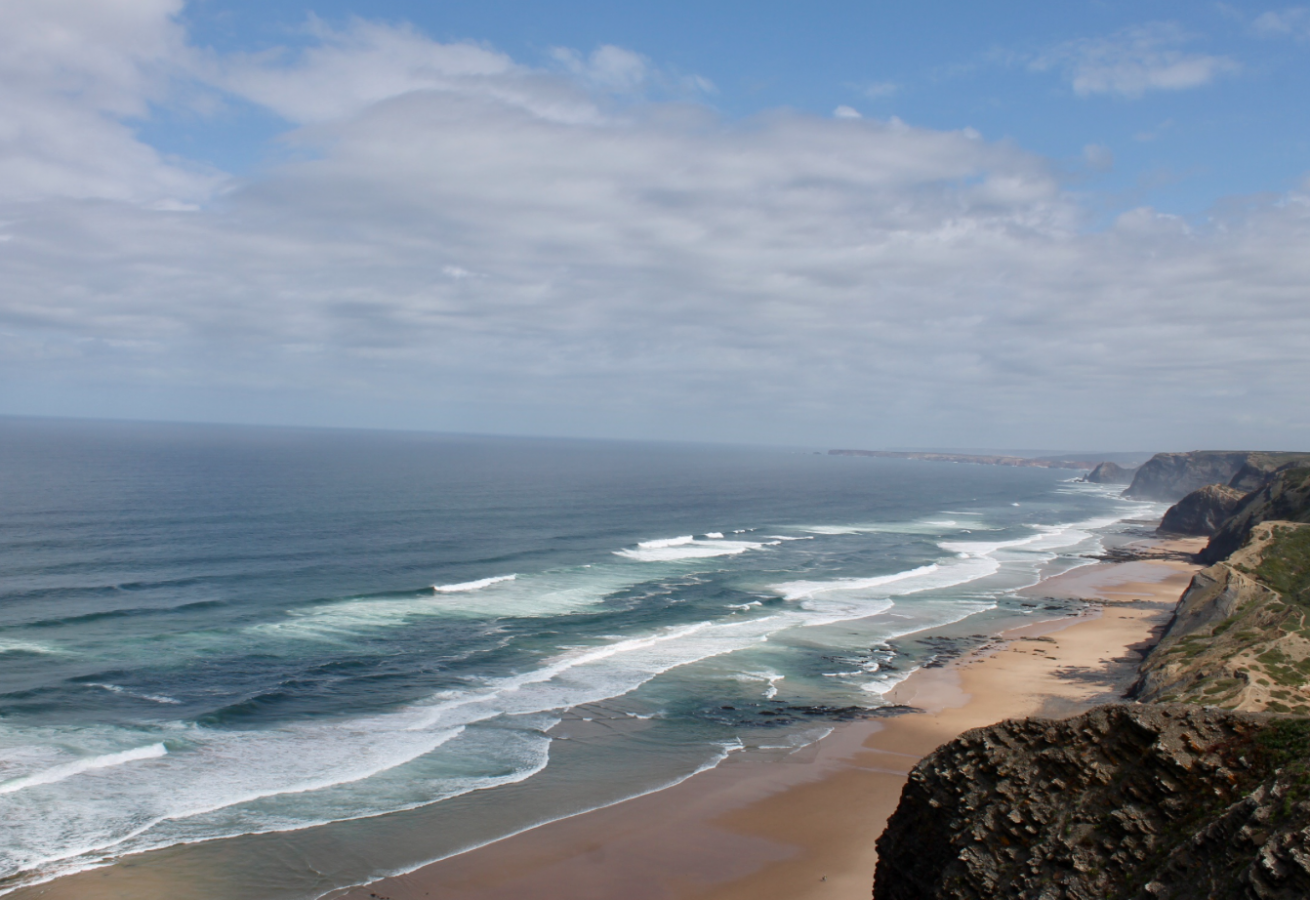 Image: Coastline of Portugal, the end of the world. (Photo: Mel Gooding)

Peniche is a quintessential surfer’s haven, so it’s really easy to find surf schools and hire. The Surfers Lodge not only offers really amiable and professional surf coaching, but is also one of the many camps that is fully committed to reducing its plastic consumption.One of its instructors, Ines, makes beautiful bags and accessories out of upcycled wetsuits, which are available to purchase. The food is fantastic, with the delicious pastéis de nata serving as the perfect tonic for your aching body after a long session. Check out the Kirana Café for really tasty veggie and plant-based grub.

If the Atlantic stirs while you’re there, make sure you make the trip an hour north to see some of the world’s best big wave surfers take on Nazaré…you will not regret it.

The coastline of the French south-west Landes region is one of juxtaposed colours; turquoise waters of the southeastern Bay of Biscay contrasting with the bleached yellows of the dunes, which in turn give way to the deep greens of the sweeping Aquitainian pine forests. This area is the surfing mecca of Europe, with surfers, travellers, skaters, cyclists, nudists and more all converging on it throughout the summer. Although it can get busy, the Landes has not been corrupted by mass tourism, and the balance between nature and man should compel you to visit whether you surf or not. 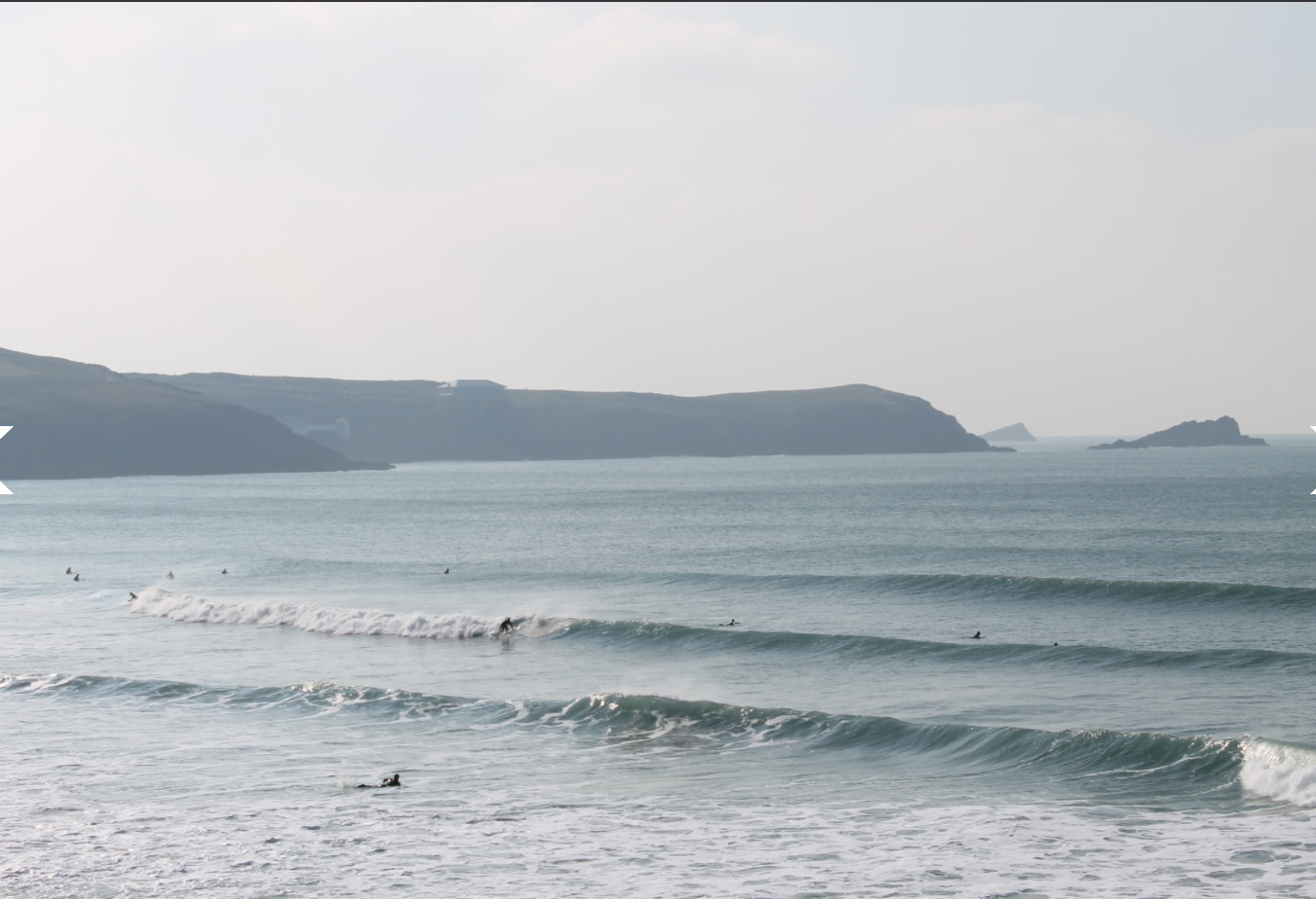 There is no shortage of places to stay in the Landes. For more intrepid explorers, the Vegan Surf Camp at Moliets is a friendly and sustainable camping environment; its food is organically-sourced and (you guessed it) vegan; the camp is prettily decorated with homemade woodwork, and a beach clean is organised every week, not to mention its other sustainable credentials. Les Echasses offers a more luxurious vibe, but it follows similar principals to the Vegan Surf Camp and is located only kilometres away from the beach.

The waves are seriously good and in summer are suited for all levels. Moliets-plage is located a mere 10-minute walk from the campsite, so you can be surfing 10 minutes after fuelling up on croissants (oof monsieur). The coastline is a 160km expanse of unbroken, sandy beaches meaning it is entirely possible to find your own slice of French heaven, even at the height of summer. The beach town of Hossegor is home to thriving bars and restaurants, not to mention quality waves. You should check out the WAXED coffee shop for the best coffee in the whole Landes region – it supports local businesses for fresh produce, as well as roasteries from across Europe providing sustainable, high quality coffee beans. For non-surf activities, the list is endless: cycle paths snake through the region, golf courses dot the landscape, kayaking, sailing, and more. And wine…don’t forget the wine. 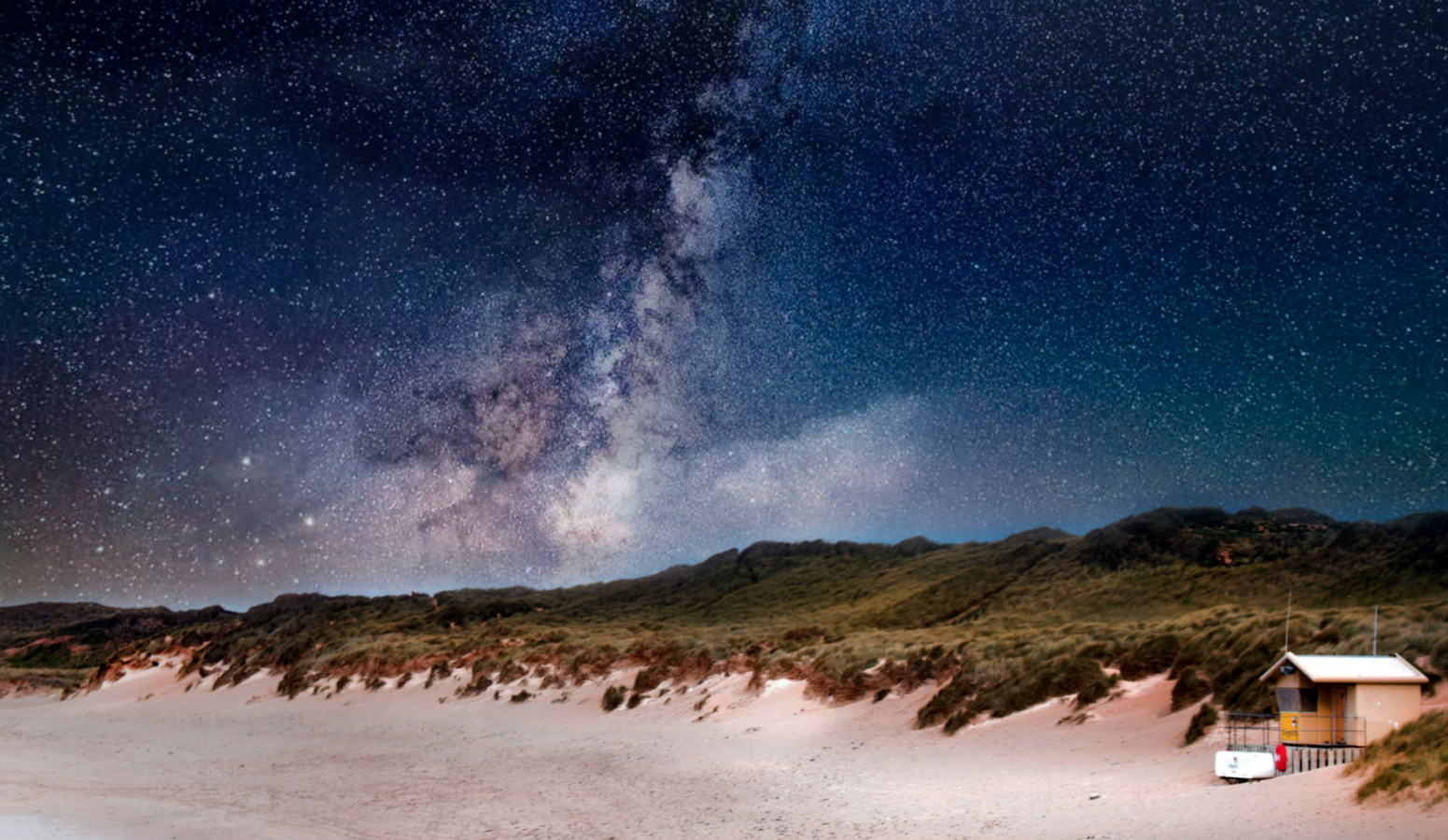 “Devin is heaven” as my late grandad used to say, and it’s true that the coastline of Kernow, Devon and the south-west is some of the most beautiful on the planet. Situated away from major infrastructure, Cornwall is the best place to get away from the non-stop hustle and bustle of the cities. Although many beaches can get very busy in summer, with a bit of nous you can always find an idyllic cove away from the crowds, and if the weather complies, bleached white sand beautifully contrasted with crystal blue waters, under a blazing sky.

Overlooking Mawgan Porth, The Scarlet Hotel is a wonderful eco-hotel that combines luxury with a long list of sustainability credentials.  The hotel uses rainwater to flush toilets, the wood and timber used in the construction and furniture is FSC certified. A locally-produced biomass boiler heats the lodge, and all water heating is solar-powered. Alternatively, the Cerenety Eco Campsite just south of Bude is a fantastic option. A winner in the Cornish Sustainability Awards (2018), Cerenety has a plethora of sustainable facilities: its showers use solar powered hot power, there are sustainable compost toilets, its vegetables are home-grown in the Cerenety ‘veggie-patch’ and its café is run on wood-burning power.

What’s there not to do in the South-West would be the more pertinent question. Surf rental is ubiquitous in the region. Croyde Bay in north Devon, Harlyn Bay and Constantine Bay in Cornwall are beautiful spots with consistent waves, although summer can have flat spells. Newquay has a great selection of beach breaks; after a surf, grab some food and a coffee at Sprout Health Foods, which is committed to offering sustainable products.

Boardmasters, a festival combining great music and surf vibes, is also committed to reducing single-use plastic to zero by 2021, and is definitely worth a visit. And if you simply want a place to relax and wind-down, the South-West is the place to be.

For tips on how to enjoy a sustainable road trip, check out Jasper’s guide

Before you set off, read Max La Manna‘s guide on how to travel plastic-free.

Planning a road trip and looking for somewhere to stay? Read Venetia Falconer‘s tips on how to plan the perfect staycation.

Discover how to offset your carbon emissions when travelling.

The Ultimate Eco-Age Christmas Gift Guide
Gift Ideas for Wellness Lovers
The World Of Natural Wine: Where To Begin?
These Things and I // The People and the Planet - A Poem for Earth Day
Travel