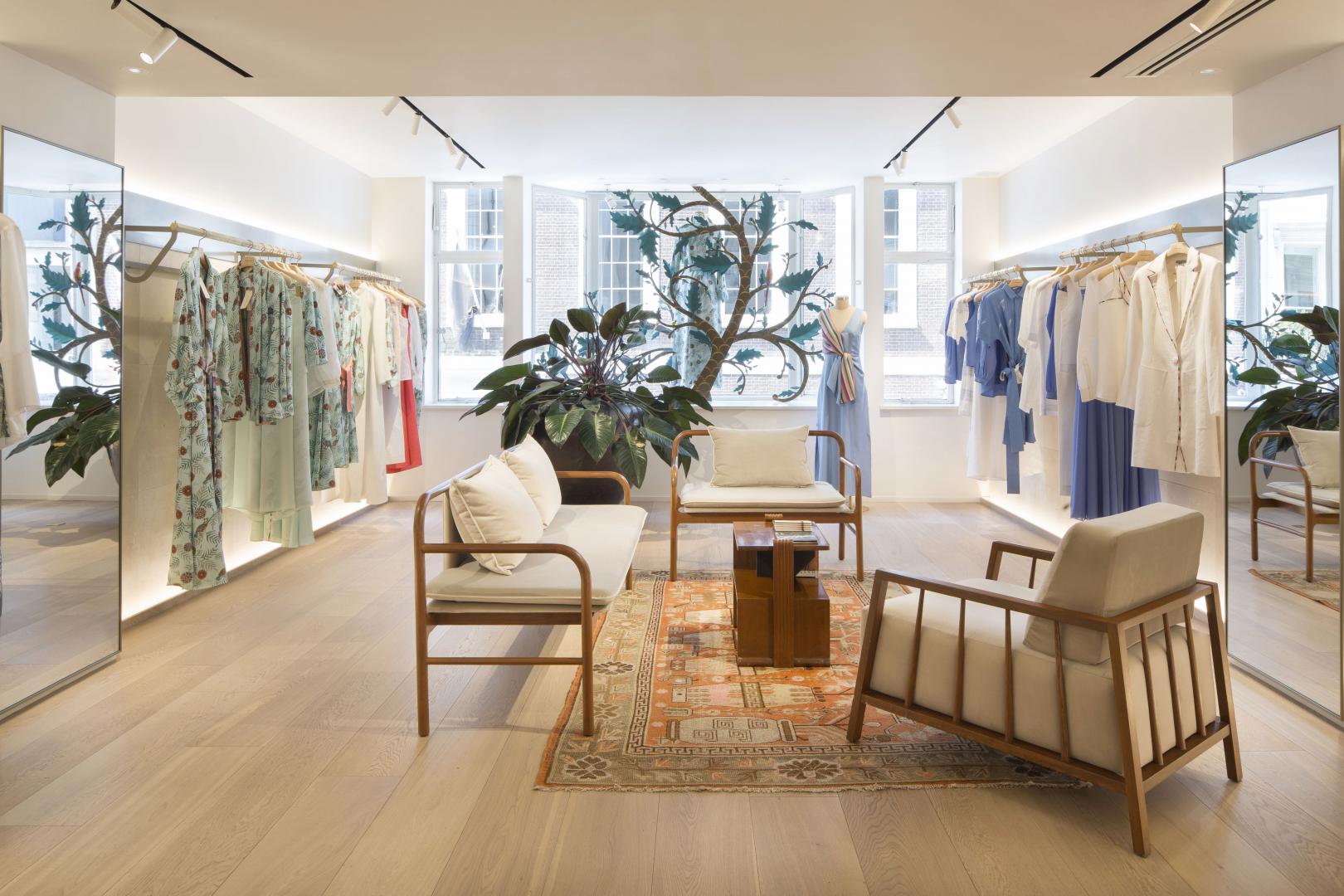 Last night at the Franca Sozzani Award in Venice, Livia Firth wore a hand embroidered coral silk cape dress by Varana. We speak to founder and creative director Sujata Keshavan about Varana’s mission to honour artisans, craft and culture, whilst bridging the gap between traditional practices and the rising customer demand for garments that embody slow fashion and a substantial story behind them. 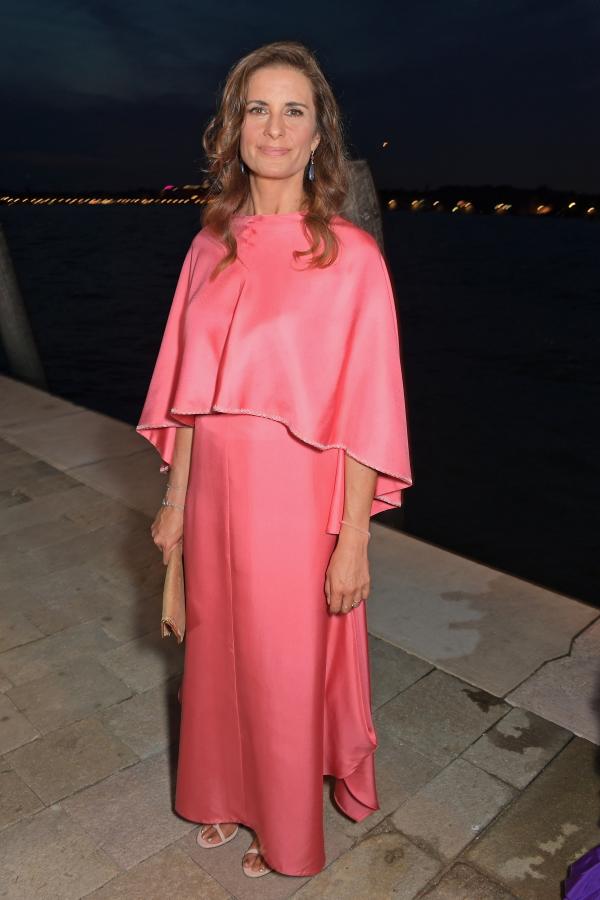 Image: Livia Firth attends the Franca Sozzani Award wearing a hand embroidered coral silk cape dress by Varana. The gown features a border embellished with intricate Aari embroidery – a traditional technique that dates back to 12th Century India that commands an extremely high level of skill.  All major production stages for this gown took place in Bangalore, Southern India. This creation can even be traced back to the hands of the craftspeople involved in its design and production in Bangalore: Designed by Francesco Chiapperini, the pattern was cut by Master pattern cutter, Ravi, the tailoring carried out by Ansari and the hand embroidery completed by Shahnawaz.  Livia completed the look with jewellery by Chopard, as part of The Journey To Sustainable Luxury. Credit: Dave Bennett.

What inspired you to launch your brand, Varana?

The idea behind Varana took form when I was with my son on a boat on the river at Varanasi, one of the world’s oldest cities, widely regarded as the soul of India. It was Diwali night and as the sun set, there were hundreds of little diyas floating on the surface of the water. It was magical.

That’s when the idea of starting Varana came to me, and that is how Varana got its name. The rivers Varuna and the Asi, tributaries of the Ganges, converge at Varanasi. Derived from Sanskrit, the word Varana variously means a river, a blessing, a benediction, a reward. The logo evokes the river where the idea was born.

For very many years before that boat ride, I had been thinking about the fact that India has so much to offer the world in terms of its extraordinary textile and craft heritage. This is not just history but a living tradition… we have the largest number of living artisans in the world and the best of them have real mastery over their craft.

Unfortunately, many of these craftspeople are losing their jobs due to the advent of globalisation and industrial mass production. I felt this was a great pity and I was wondering if we could do something to arrest the erosion of the rich cultural heritage that was disappearing along with the decline of crafts.

In my view what was key was a contemporary and international approach to design that was needed to make products that were relevant to markets in other countries. As an internationally trained designer who was familiar with Indian craft, I felt that I could be the bridge that re-interpreted India’s heritage through modern design, creating products that were different and interesting which global audiences could relate to.

Shortly after my visit to Varanasi, I discussed the idea behind Varana with a friend, Ravi Prasad, who at the time headed the wellness company Himalaya Healthcare. He was very excited by the idea of creating a luxury brand from India for the world. He provided the business perspective that was necessary for us to make the project a reality. We then decided to go ahead and give it a shot.

We launched the brand through a flagship store in Dover Street, Mayfair. We felt it was important to have a physical space where we could communicate the thinking behind the brand, and where people could touch and feel the products to see the quality for themselves.

What are your sustainable priorities as a business?

In this world of unsustainable fashion, where all kinds of brands employ wasteful practices and polluting fabrics, Varana uses only natural, biodegradable fabrics. Our fabrics include silk, cotton, linen and cashmere. By not using synthetic fibres such as polyester, nylon or acrylic, which are made from petroleum, Varana significantly limits its contribution to plastic pollution.

In addition to using natural fabrics and low impact dyes, we are committed to reusing and repurposing all our fabrics and garments. We hate waste. We never discard our clothes or send them to landfills. In terms of design, we consciously create clothing that can be carried forward from season to season.

Varana’s sourcing methods encourage what is known as “cottage industry”: small-scale manufacturing activities conducted in craft clusters or even people’s homes. Our artisanal production involves minimal water or electricity consumption. Varana’s supply chain is closely integrated with local artisans and small-scale craftspeople. Our designers have on-going relationships with the workshops that we work with.

Varana’s garments are both designed and sewn in our own atelier in Bangalore. The garments are made on hand operated sewing machines in small batches. We are thus closely acquainted with the people who work on our products.

Varana is never exploitative and is mindful about paying fair wages to its artisans while ensuring that people work in pleasant working conditions. We try and inculcate pride in the artisans for their craft, explaining how their work is appreciated by discerning customers from far-away lands. 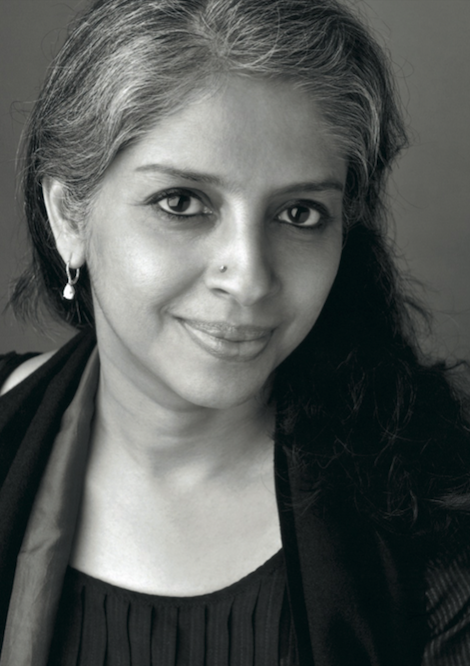 Where do you find the inspiration for your designs?

Varana is unusual in that our collections are based on an annual concept or theme, which centres our thinking and serves as the inspiration for the work done through all seasons in the year, i.e. through spring, summer, autumn and winter. Varana celebrates history, craftsmanship and culture, and the sources and inspiration for the collections is drawn from the vast fount of knowledge they present.

For example, our first collection called “Eternal Love” was based on The Taj Mahal. We decided to work on The Taj because it reflects the ultimate mastery of craftsmanship and also because it is very rich in iconography, with a variety of motifs and patterns used in the inlay work on the walls and the floor. We also identify the craft techniques that would fit conceptually with the chosen theme. For example for the Taj concept, we worked with wood block printing, Aari embroidery and Jamdani weaving all of which were brought in by the Mughals and flourished under their patronage.

At this time when the ecology of our planet is increasingly under strain, we have chosen to highlight the idea of The Tree of Life in our current collection. We all know that trees are fundamental to our existence, and that life on earth cannot exist without them. The fires in the Amazon forest further highlight the planet’s predicament, and we thus choose to shine a light on this (literally) burning issue at this time

Why is it important to you to preserve the artisanal craft and traditional techniques of the past through your designs?

India has an extraordinary deep, rich and complex textile and craft heritage. Some of our printing and weaving techniques have been traced back to the time of the Indus Valley civilisation, practiced within families for generations with knowledge being handed down from father to son and mother to daughter. It was these rich and beautiful fabrics that were so compelling for the East India company from the 17th century onwards, making them travel across the world to take back treasured silks and cottons from India to Europe. Indeed, the British empire was built on the back of this trade.

Today, many of the ancient crafts and textile techniques are endangered due to the onset of machine production. Young people are attracted to modernity and find the old complex techniques tedious and difficult. One can still find extremely skilled master craftspeople practicing their trade, but their numbers are certainly declining and it is not certain that their children will take to the trade. The first crafts to die out are the ones which can be easily replicated by machines. The intricate hand weaving of brocades, ikat and complex printing techniques that cannot be created by machines, will continue to have patronage.

For various reasons, Indian craft techniques have stayed within the sub-continent and continue to be used mainly in our traditional clothing. In so many instances one sees that the craftspeople continuing to make the things that they were making fifty or even a hundred years ago. What is missing is an international approach to design that would make their products relevant to markets in other countries. As a contemporary as well as internationally trained designer, I wanted to re-interpret design from this region and make it relevant to the rest of the world. 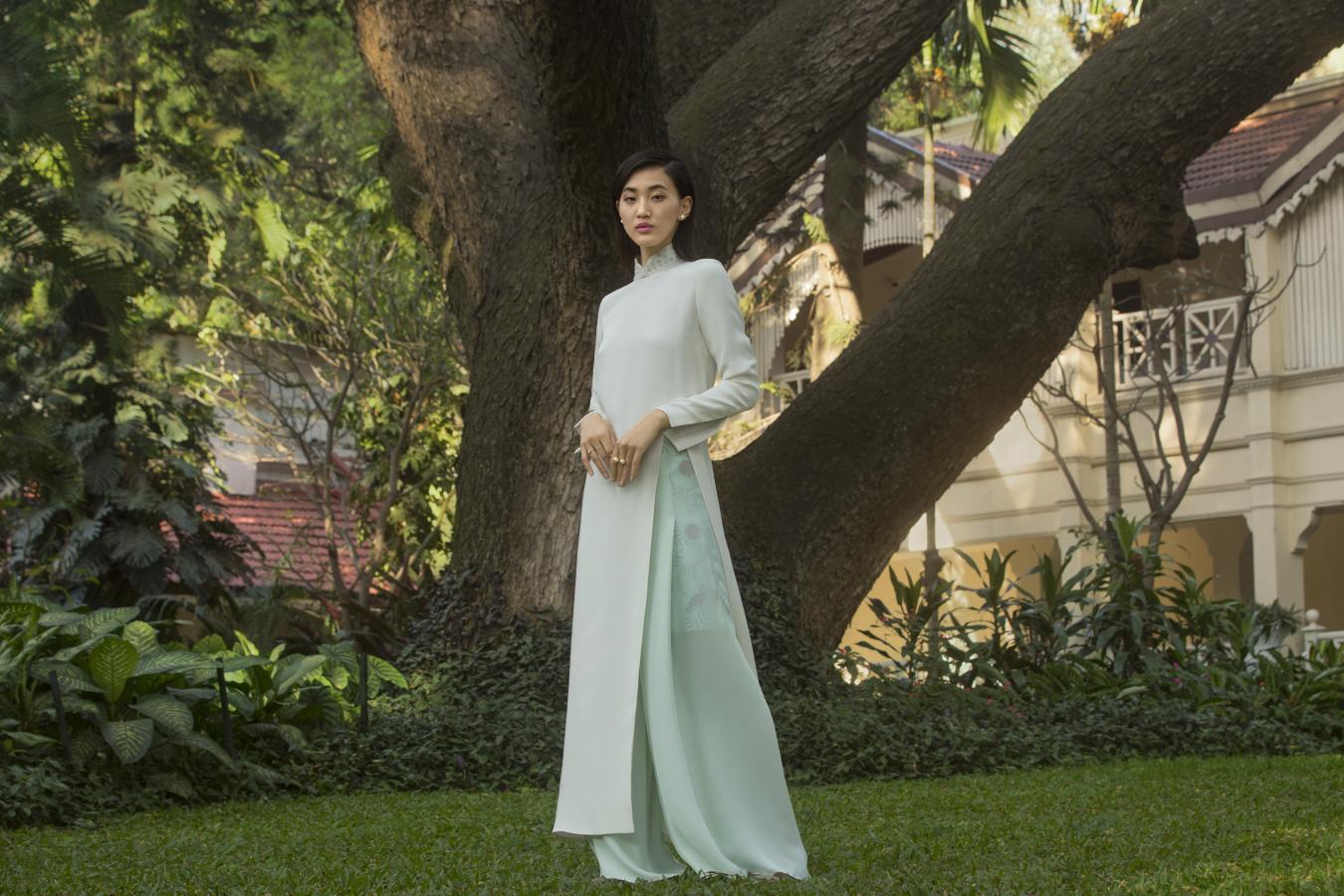 What have been the biggest challenges to building a sustainable business?

We make things in small batches, and the work done by human artisans is inherently sustainable.

The biggest challenge we’ve faced so far has been to find common ground between their universe and that of the international fashion industry which is very set in its calendar and ways of working. Getting the two worlds to intersect and work together is indeed a challenge. One world is unchanging while the other demands constant change. For example, artisans in craft clusters do not always relate to the idea of seasons and deadlines, so critical to the world of fashion in London. Sickness or death in the family or even a bad monsoon can halt work for days. Standardisation, a concept ingrained in western culture is not understood here. As artisans working with their hands, they can’t understand what the fuss is about if things are not quite the same batch after batch and piece after piece.

Our biggest achievement so far is that we’ve managed to figure out how to integrate the two very different worlds described above. We’ve understood how to work sustainably with artisans and have built a reliable supply chain to meet international market requirements. We regard this as an important and very necessary milestone and fundamental to succeeding in the long term.

The other achievement is that we have found that our philosophy resonates with people from many different countries, who appreciate and value our mission and our efforts. 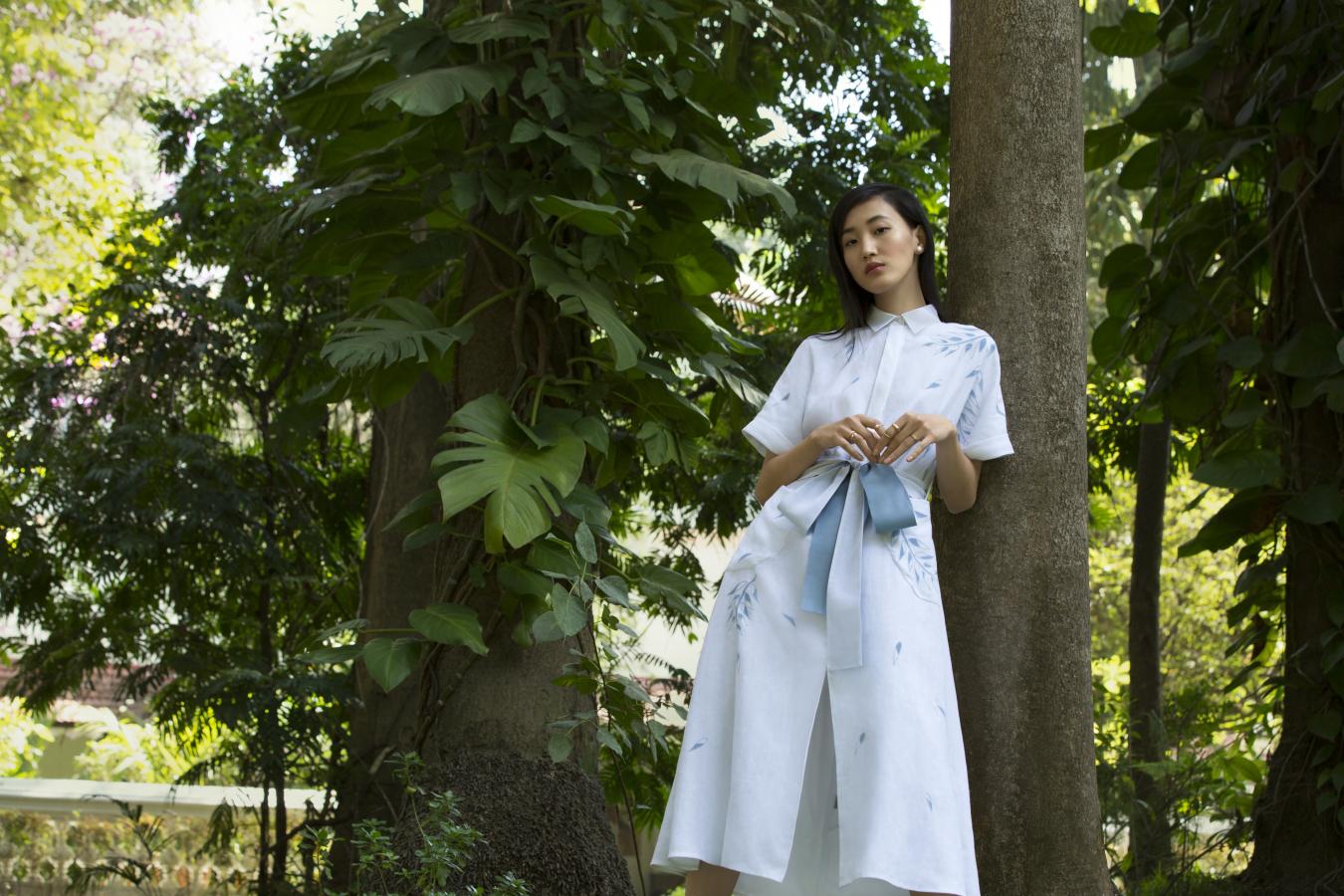 What is your mission or ambition for Varana?

Varana is an artisanal luxury brand that celebrates history, culture and craftsmanship. We use the best natural fibres with an emphasis on making by hand, in sustainable and ethical ways.

Varana’s mission is to shine a light on the deep and rich legacy of textiles and craft from the Indian subcontinent. By reinterpreting the vocabulary of traditional craft through contemporary design, we hope to create new markets and patronage for the makers, giving them a livelihood and fostering pride in their knowledge and skills.

What’s next for Varana?

Since we launched we have customers from over fifty countries at the Dover Street store alone. While that tells you a lot about London, it also indicates that Varana has a truly international appeal that crosses borders.

We now have to think about increasing our global presence. We plan to take the brand forward through a hybrid model of our own stores; online through our own website and also to select boutiques and speciality stores in other countries. We have just started taking our baby steps out in the world and we plan to do many exciting things in the years ahead!

Discover the history of hand-block printing in Jaipur.

See all the highlights from this year’s Franca Sozzani Award.