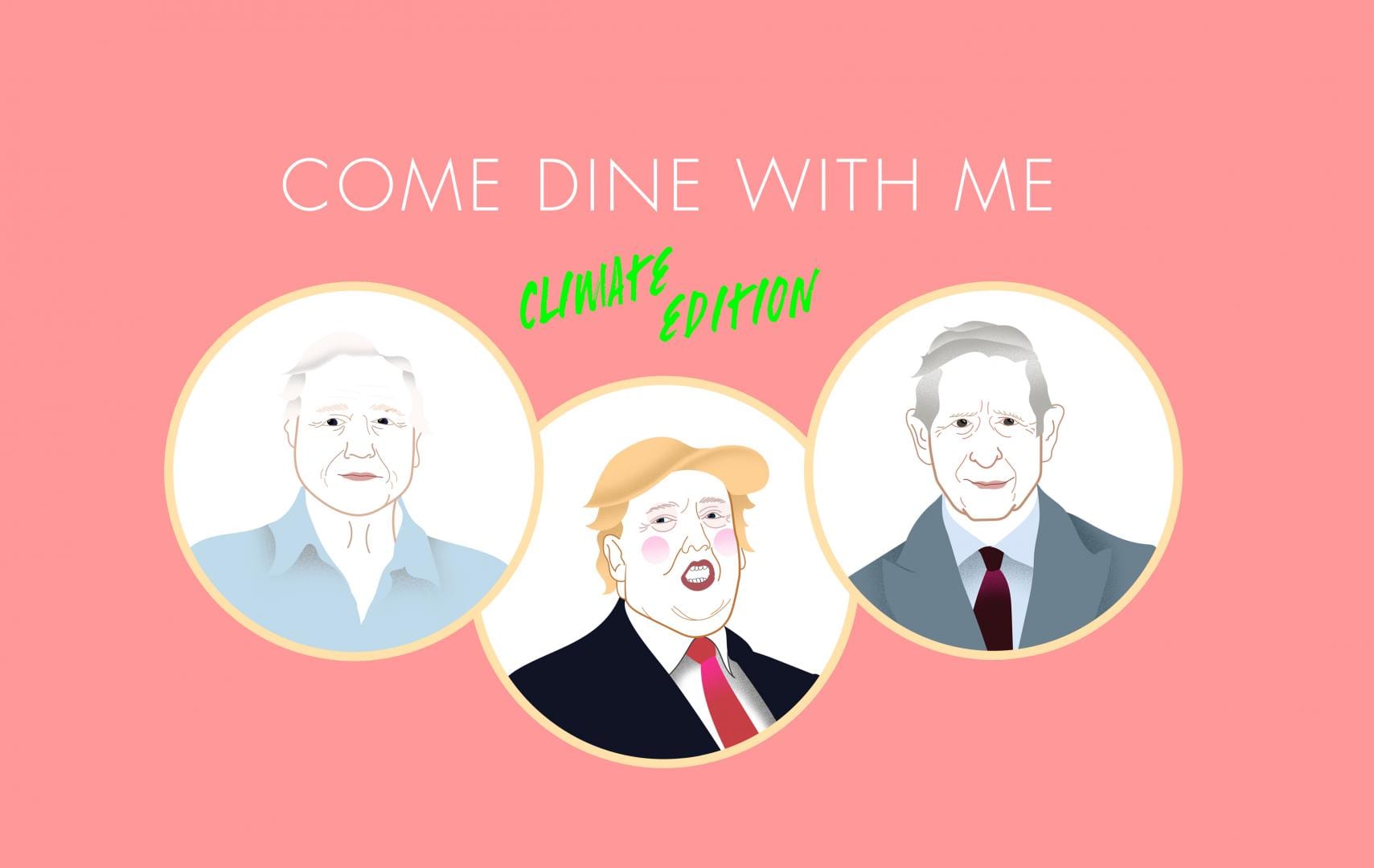 Come Dine With Me: The Climate Edition

For the longest time if someone were to ask me who my dream dinner guests were to be I’d have said either Emma Watson for a good discussion on ethical fashion; the life of any party Jamie Lee Curtis; and Jake Gyllenhall – for obvious reasons…

However, after days of following US President Donald Trump’s escapades around the UK and reading about his climate conversation with the Prince of Wales (ironically on World Environment Day) I’ve decided that my ideal dinner would be Come Dine With Me: The Climate Edition featuring Donald Trump, Sir David Attenborough and Prince Charles (Attenborough could do the voiceover too – what a dream!)

Picture this, the guests have arrived, I’ve popped the champagne and we have congregated in the lounge to meet and greet. Handshakes all round, niceties exchanged and now it’s time to get in to the nitty gritty.

We’ve seen Trump face tough interviewers and almost every day he is tasked by ballsy journalists and activists to answer questions on the current climate emergency, which he has previously implied is a hoax, each time giving the same unconvincing, undecipherable answer. His views are all the more surprising considering his mother, who emigrated (we’ll pass over the irony here) from Scotland in 1930, took an interest in renewable energy while maintaining the Trump household.

But, perhaps not all hope is lost.

The concept of global warming was created by and for the Chinese in order to make U.S. manufacturing non-competitive.

In a 90 minute long conversation with Prince Charles at Winfield House yesterday, Trump found himself yet again faced with the same pressures to discuss the climate emergency we face. Yes, he did dismiss the issue, and yes, he did claim that the US has one of the cleanest climates, but somewhere in his usual babble of blame placing, he used the word ‘agree’.

“He [Prince Charles] wants to make sure future generations have climate that is good climate, as opposed to a disaster, and I agree.”

Correct me if I’m wrong, but that was very un-Trump like. Is it possible the climate-wall is falling down? Is his icy-exterior starting to melt? Pardon the terrible puns, but you get what I mean.

The Prince of Wales did well to approach Trump in a manner that regarded respect from the US president, but Sir David Attenborough insists he would call upon the power of evidence to convince the leader to change his view.

Having previously called Trump ‘blind’ to the seriousness of the environmental issues, Attenborough detailed the top-line issues facing the world today alongside the notion that if we make changes now we can avoid this ‘disaster’ that not even Trump wants.

In an interview with the Independent, Sir David Attenborough said: “I have no idea as to whether I could convince [Trump], but it would be cowardly not to take up the challenge, would it not?”

On June14th, Donald Trump’s own Birthday will be turned into a day of eco-action against him. A mass protest-switch to green energy, directly undermining his own climate policies. Find out more at TrumpsEarthday.com

Watch Sir David Attenborough‘s best speeches and read some of his best quotes.