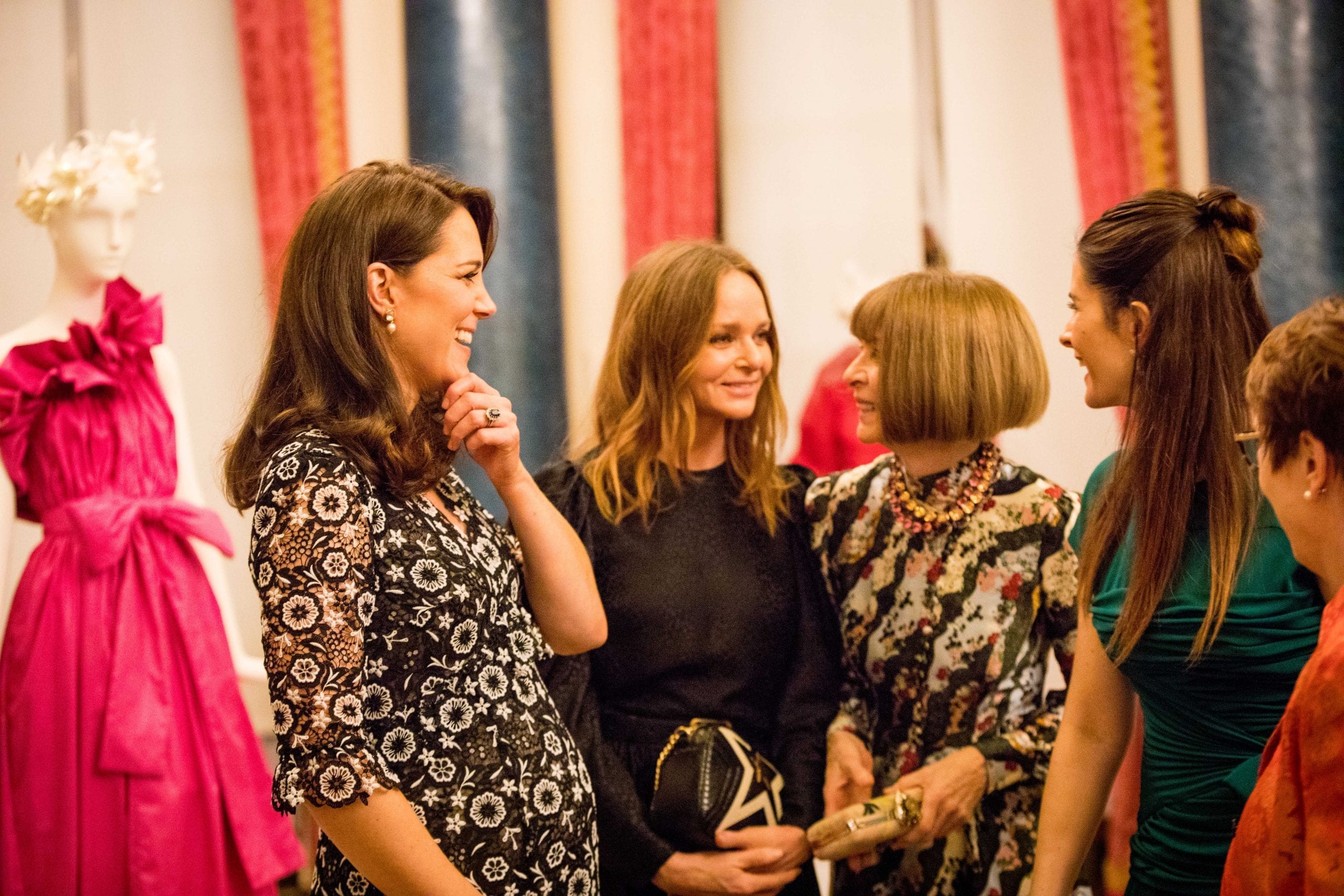 On behalf of Her Majesty The Queen, Head of the Commonwealth, HRH The Duchess of Cambridge and HRH The Countess of Wessex, a reception was held to celebrate and showcase designs, designers and artisans from across the Commonwealth’s 53 countries who have participated in the inaugural Commonwealth Fashion Exchange (CFE).

The initiative was launched in early February 2018 by Commonwealth Secretary General the Rt Hon Patricia Scotland and Livia Firth, founder of sustainability consultancy Eco-Age who initiated and produced the ambitious Exchange project.

“[The project] is about engaging young people and using fashion as a thread that connects everyone”.

The reception saw 30 CFE creations displayed in the Palace’s State Apartment. From Thursday February 22 the design looks were displayed at Australian High Commission on the Strand before being exhibited during the Commonwealth Summit itself. The exhibition was carefully curated by VOGUE’s International Editor at Large, Hamish Bowles.

The Palace celebration included guests from the fashion industry across the Commonwealth nation with attendees including Anna Wintour, Edward Enninful, Livia Firth, Nadja Swarovski,  Neelam Gill, Nigel Gosse, Ulric Jerome, Naomi Campbell, Stella McCartney, Adwoa Aboah, and Caroline Rush alongside many of the designers and artisans who created the CFE designs and representatives of the newly-affiliated Commonwealth Fashion Council.

In partnership with Swarovski, The Woolmark Company, MATCHESFASHION.COM and NEST, The Commonwealth Fashion Exchange aims to reflect the fact that fashion provides a common language to create new networks and connections.

The project brought the Commonwealth together to showcase a wealth of design and artisan fashion talent across its 53 countries. Participating designers and artisans collectively represent all 53-Commonwealth member countries in a major new initiative ahead of the Commonwealth Heads of Government Meeting in London this April.

The free two-week exhibition allowed members of the public to see these unique, one of a kind items from selected design talent including major names such as Karen Walker representing New Zealand, Bibi Russell representing Bangladesh and Burberry and Stella McCartney representing the UK. Each look was created using the Green Carpet Challenge® (GCC®) Principles of Sustainable Excellence.

The exhibition took place from 22nd February until 6th March at the Australian High Commission, London. Livia and Colin Firth, Noella Coursaris Musunska, Nadja Swarovski, Nigel Gosse and Ulric Jerome held a private reception at Australia House on the 22nd February to celebrate the launch of the public exhibition.

“I think what’s so remarkable is that so many of these designers, while drawing on their own culture and skills…they have produced extremely chic, wearable high fashion clothes”.
– VOGUE’s International Editor-at-Large, Hamish Bowles