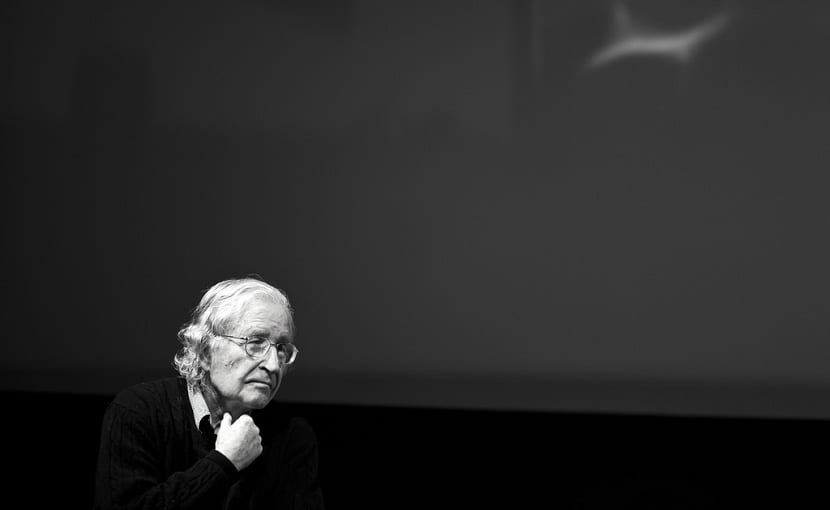 I find the planet’s greatest linguist sitting behind a perilously high fence of books in his Boston office. I wonder for a moment if he’s purposefully building a type of book pod around his desk. Throughout I’m slightly worried they might avalanche. They say you should never meet your heroes, but this is the second time I’ve met Chomsky. I have been lucky enough to interview him before, when I produced In Prison My Whole Life, a documentary about the imprisonment on death row of Mumia-Abu Jamal in which Chomsky appears alongside Snoop Dogg and Russell Simmons. But this time I’m back on green business.

I have long been convinced that the language of green – yes, even words such as my beloved ‘eco’ have become too tired and associated with greenwashing to really galvanise change. Does Chomsky have any suggestions or advice for creating a new lexicon? To my surprise he shakes his head. ‘I don’t think there’s an answer to that question because supposing you came up with some new concept, some new definition, in no time it’ll be picked up by the commercial advertisers. Then it’ll be cheapened and distorted and then you’re back where you were,’ he warns in a kindly manner, ‘That’s what has happened to every word you can think of that’s been used in social and political commentary. In fact that’s part of the advertising business – to take over words and motions that seem as if they have some appeal, and to reconstruct them so they fit into their agenda. It’ll happen with any new words that you come up with, so that’s a losing battle’.

For a moment I worry he’s suggesting we give up the fight. ‘But given the battle we’re engaged in what should we do?’ I ask. No fear. Chomsky has lost none of his fire and it’s no time at all before climate change deniers are getting both barrels. ‘The thing to do is to try to make people recognise the facts.’ He perceives that there has been ‘virtually no reporting on the recent studies of the International Energy Association or even the US Department of Energy when their last couple of reports are extremely alarmist. They say that we have at best a few years until reaching tipping point [on global temperature]. Then you turn on the debates and there’s a sort of catechism that you have to repeat to even participate, you have to say there’s no global warming. In the most extreme cases you have people such as Ron Paul claiming that climate change is the worst hoax of the century.’

And it is not just the denial of climate change that Chomsky finds untenable. ‘You also have the virtually unreported warnings of what’s going to happen – if you take the latest meetings of the American Geological Association for example there was an extremely alarmist report on methane released. What’s missing entirely from the discussion is the very substantial number of climate scientists who do criticise the IPCC report because it’s much too conservative’.

Chomsky agrees that as the general public we can hardly be blamed for becoming confused, ‘Of course. The way these issues are presented in public, you can understand why people are confused.’ He cites a newspaper he considers to be ‘one of the most sensible’ and the way it reported on the US Department of Energy release on emissions for 2010 ‘the piece pointed out that it was effectively game over, a fact rarely mentioned in the press. Then two days later the same newspaper runs a full page, giving a euphoric account on how the US can and will be able to exploit energy independence by fracking, how this will mean for another century the US can live by its own resources and retain global hegemony. So you have an upbeat account following right after a piece telling us that in a couple of years it’s game over. Of course we’re confused!’

So how do we get people to change? ‘You have to convince people there’s a real problem and to understand the nature of the threat in order for them to do much.’ He gives the Keystone XL pipeline as an example, ‘there’s a lot of protests including conservative ranchers who oppose it on some level,’ but suggests that we’re not discussing the main point, ‘there’s very little talk around the fact that it will bring not only hydrocarbons into the market, but particularly dangerous ones. The stuff that comes out of the Tar Sands is very high in carbon, higher than [conventional] fossil fuel. That’s what we need to discuss. Let’s get people interested in basic facts.’ 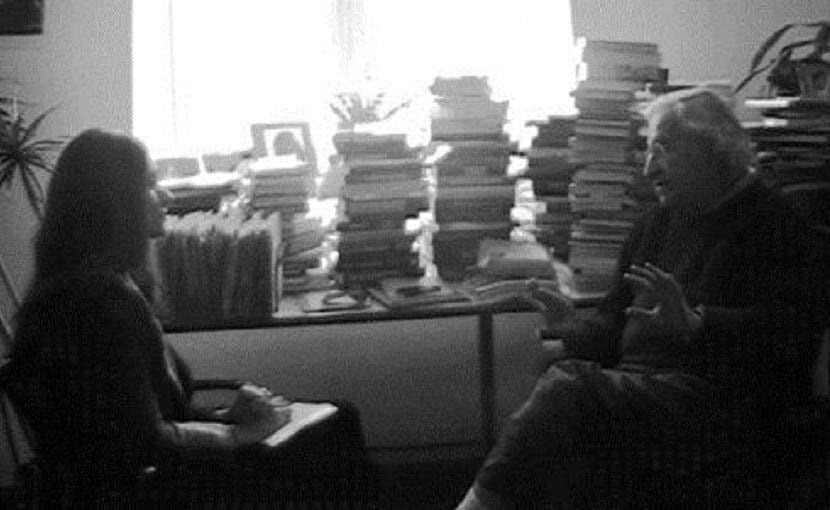 So if we bring the facts, the rest should follow? Is a beautiful, powerful grassroots movement possible? ‘There are reforms that are possible,’ says Chomsky carefully, ‘If people can perceive the nature of the threat and the problem. In fact there some indications that things have happened, for instance the popular pressure than caused the delay of the excel pipeline. It’s not a huge victory but it is a victory for activism. And these victories can spur people on. It’s even perfectly possible within a capitalist system to imagine a shift say from fossil fuel to solar energy, as plenty of people can make money from this, but in the longer term there’s fundamentally a contradiction. I don’t see any reason to think about how we could do things differently.’

We are he concedes, way behind. ‘The lead has been taken by indigenous societies. You have the remnants of the indigenous populations, some of the most oppressed people on the earth who are the ones taking the lead on the issues of species survival. Take Ecuador as an example. It is the only country in the world that has constitutional provision for rights of nature that have been introduced in legislation. These countries are leading. The rest of the world has a lot of catching up to do. It is going to be necessary to shift policies radically and soon.’

Inevitably we begin talking about consumerism. ‘I happen to have two grandchildren – two boys,’ says Chomsky, ‘One was born here and one in Nicaragua. Before their birthdays my wife would ask them what they wanted. When they were about to be 12 she called them. The one here immediately wanted a camcorder or something that cost over $100. Now his mother is very anti consumerist and they have no TV and all of that kind of stuff. When she called the kid in Nicaragua, he said, he would think about it. In two days time he called back, ‘I could really use a belt, but if it’s too expensive don’t worry about it’. So there we have two boys, brought up by mothers who are both equally anti consumerist but in two different societies.’ He tells me about a recent gathering for his extended family for Thanksgiving in the US. ‘All two of the teenage girls wanted was someone to drive them to the mall on Black Thursday (the night before Black Friday, the beginning of the US Christmas shopping season and a traditional consumer frenzy where stores open at 4am). They didn’t even necessarily want to buy anything, just wanted to stand in line and be part of something. When I was growing up there were other things to do with your life other than standing in line buying goods.’ He thinks that part of the appeal (and success) of the Occupy movement might just lie in the fact that it offers something else, ‘It takes young people who were isolated and shows them the joy of participating with others.’

We talk about the best hope for change. ‘Things would be different if women ran everything. They make the best leaders,’ I opine, only half in jest. ‘Yes, like Margaret Thatcher,’ he retaliates. Then we both laugh for some time. I have one more question. He once (in 1957 to be exact) said, ‘green colorless ideas sleep furiously’. Was there a hidden meaning lurking here for a nascent green movement? Er no, explains Noam Chomsky politely, it was a sentence to show the difference between syntax and semantics. The very idea being that it is meaningless. Then we laugh some more, but not as much as at the mention of Margaret Thatcher.

Girl Power
Why We Need to Help Save a Generation of Emerging Designers
Wardrobe Crisis: Where Do Our Clothes Go When We Stop Wearing Them?
World Oceans Day: Livia Firth in Conversation With Oskar Metsavaht