Greenwashing: What does it mean?

Welcome to the final instalment of Cradle for 2021. As we come to the end of this year, I want to extend a huge thank you to everyone who has joined us on the rollercoaster of 2021. At Eco Age we believe that it is only through deep work and deep understanding that we can secure the future of this industry and the wider industry too. We can’t work with everybody, because frankly some businesses are not courageous enough but we want to take this opportunity to say a very heartfelt thank you to those lion-hearted sustainability warriors we have been able to team up with this year. We close this issue with some of our heroes and inspirational moments that have driven us forward during 2021.

A number of positive moments stand out from the last 12 months. In particular the launch of the latest of our Fashionscapes short documentary series. In Fashionscapes: A Circular Economy, we investigate the scope and edges of the promise of circularity in fashion. The launch coincided with the release of our first ever report, authored by Veronica Bates-Kassatly and Dorothee Banmann-Pauly. The Great Greenwashing Machine scrutinised the sustainability claims of a number of pivotal fashion players, and began to look closely at the methodology behind some of them, particularly on fibre selection.  The report finds many brands are failing in their efforts, because they are using a flawed definition of sustainability, unscientific methods and selective implementation.  In short – greenwash.

Throughout the Summer and the Autumn, we have continued to hear glowing feedback for both the report and the Fashionscapes profile. So much so that we have made it the theme for this final issue of Cradle for 2021, and that’s why we commit to push further and faster on this next year (when we will also launch the second instalment of the report). We will then see how deeply greenwash has become embedded. It’s an important reality check so that we can stop, correct and push forwards with a better system. After all, we are all here on the same mission, to make this industry we love sustainable, rather than having the appearance of being sustainable.

With this thought, we wish you a very happy festive season and as always, we hope that you get a lot from this special issue of Cradle. We will catch up in the New Year!

The Cradle essay: can we be the generation to end greenwash too?

The term ‘greenwash’ might have been fashioned for this very industry. Certainly there are enough examples: many brands, retailers, influencers and associated segments of the fashion industry stand accused of greenwashing. We also know from surveying citizens that fashion is one of the industries they are worried about when it comes to false statements on planetary impact made by fashion brands.

WHAT IS GREENWASH: A DEFINITION

Greenwashing is the term applied when advertising, marketing and public messaging, including social media, hypes a product or service. It may suggest that a product or service has preferential sustainable characteristics, that would lower its overall impact, when in reality this isn’t the case. In effect, it’s a deception. Some companies will also use greenwashing to distract from the fact that their product or service is actually environmentally damaging.

Misrepresentation obviously includes false claims but can also include exaggeration. Sometimes brands make things deliberately woolly using statements such as “conscious”, “eco-friendly”, “sustainable” without proof. What’s in it for them? They all convey the impression that a product has little or no impact on the environment. That both ‘sells’ as we become increasingly eco conscious and enhances the brand’s reputation by allying them with doing good.

Close cousins include ‘sportswashing’, the act of using a major sporting event to enhance reputation.

However, surprisingly this term wasn’t built for fashion!  Its origins are actually in the travel and tourism industry. In the 1980s an American environmentalist Jay Westervelt, who was evidently doing a lot of travelling, became incensed by the way hotels put signs up pleading with guests to reuse their towels thus “saving the environment”. He figured that they were doing little to promote recycling elsewhere and he suspected the primary motive of most establishments was to save on laundry costs. The phrase ‘greenwash’ entered into usage.

Fast forward to now and it has been taken up across the world, in different formats and is one of the most common complaints about the fashion industry. In a recent online survey by the the UK’s Competition and Markets Authority (CMA), 40% of claims by companies across sectors were found to be greenwash. But now authorities are getting tough and we are seeing an increase in legislation that rules against greenwashing.

In September, the CMA published its Green Claims Code focusing on six principles based on existing consumer law that make it clear firms making green claims “must not omit or hide important information” and “must consider the full life cycle of the product”. The CMA describes the code as putting companies on notice for changes that will be implemented in early 2022. Watch out! This could be big.

When it comes to tackling the curse of greenwash, France has been the leader of the pack in Europe. Back in 2012, the French Agency for Ecological Transition published an anti-greenwashing guide singling out excessive promise, a lack of scientific data to back up claims and the use of confusing visuals as examples of greenwash. In 2017, France introduced a ‘duty of vigilance’ law. This requires French companies over a certain size to monitor supply chains for violations – including human rights and the environment.

In April 2020, the French professional regulatory authority for advertising (Autorité de Régulation Professionnelle de la Publicité – ARPP) published an update on greenwash in its guide on fair trade. In March 2021, the French Agency for ecological transition pushed to get the claim ‘carbon neutral’ banned by law (this remains unresolved). A month later, in April 2021, the French Government increased its fine for misleading commercial practices to up to 80% of the ‘false’ promotional campaign cost where claims are related to the environment.

Not everyone is a fan. During the recent UN Climate summit, COP26 in Glasgow, Jesper Brodin, the CEO of Ikea and Ingka Holding seemed to speak out against the crusade to clamp down on greenwashing. With climate change the main threat to humanity, “I’m of the strong opinion that greenwashing is less dangerous than silence,” he told an interviewer.

We think that is a bad take. Firstly, greenwashing is not a victimless ‘crime’ (and as we know in some places it will soon be categorised as a violation, at least towards the consumer who is often hoodwinked). But it goes much deeper in an age of ESG funds and investments. We’re increasingly looking to markets to do the heavy lifting on transformation from a linear, fossil fuel, extractive economy to a (truly) circular, renewable-based equitable model. We need to continue to scale up the flow of cash to the latter. If that is based on false evidence, greenwash, then that is potentially catastrophic. Make no mistake, ESG and the desire to lead in green investment is powering this pursuit of greenwash (false claims).

Secondly, Mr Brodin’s intervention suggests that ‘silence’ would be a much bigger problem than overclaiming and leading consumers, citizens, producers and markets up the garden path. We disagree. There is a relationship between noise and greenwash. As the consumer expert Steffen Boehm of Exeter University has pointed out, the more noise, the more greenwash – as companies who haven’t put in the work, the time and the investment join the conversation to fight for market share with superficial, unsubstantiated green claims. 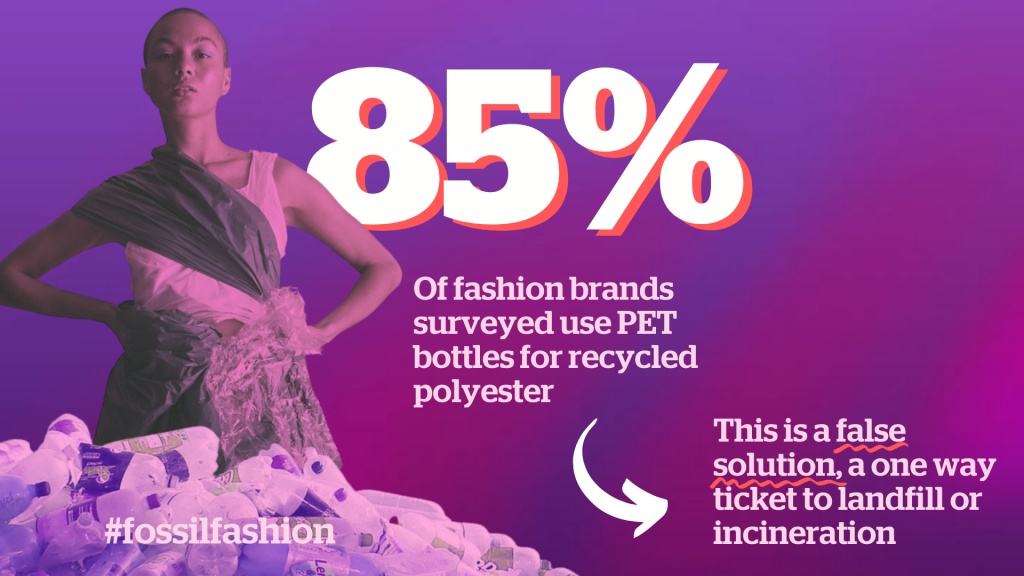 Frankly it would be better if some piped down. A popular phrase we use at Eco Age is ‘cut through the noise’. A little less noise, and a lot more action is what we need.

Sadly it isn’t hugely surprising to hear a major consumer brand take this position. They are not the first brand to push back. They are not even the first large Swedish brand to attract such claims: In 2019 H&M was pulled up by the Norwegian Consumer Council for a lack of precision on the sustainability claims of its ‘Conscious Collection‘, which the Council said breached Norwegian marketing laws.

But many point out that the most interesting (and potentially transformative) aspects of a clamp down on greenwash is that the big brands and major players should not, and cannot, dictate terms (of how this moves forward). Getting tough on greenwash means strong independent oversight. Some will ask, ‘well who gets to decide what is sustainable and what is not?’ The answer to that question needs to be ‘science’ and ‘evidence’. But that needs to be completely and scrupulously independent, transparent and based on fact. Because greenwash runs much deeper than an overclaim or an oversight. Hunting it down and correcting it means we must challenge the complacent use of biased and incomplete methodologies that compare the very fabric of products. This is a risk we’re currently trying to prevent occurring at the EU level with the European Commission’s proposal for substantiating green claims through Product Environmental Footprinting.

The shift towards recognising, calling out, investigating and prosecuting greenwash will not happen overnight. It will take time to bed-in legally too. Legal experts expect a lot of debate to arise. They will need to distinguish green claims from ‘grey areas’ of the law. This will only be possible if we keep clear goals in sight.

But we shouldn’t leave it up to them. There is much that we can do. In the New Year, we will launch our campaign on greenwashing and we’ll publish the second part of the Great Greenwashing Machine. This is not an issue that anyone needs to be a bystander. Want to get involved? We sign off this special edition with a way forward.

Being an active citizen is important and getting involved where you can at the political level can help you do this. For example, the European Commission announced a new initiative to address the unintentional release of microplastics pollution in the environment – this initiative is currently open for public feedback and you can share your views on this until the 18th January.

Follow the Make the Label Count campaign as it advocates for the European Commission to adopt a more complete, accurate and transparent methodology in its plans to measure sustainability claims.

Follow us and support our action. As we’ve alluded to in this edition, we have a major new report coming out from two of the most insightful analysts working on fashion and textiles today.

Through the increasing use of synthetic, fossil fuel-based fibres and petrochemicals, the fashion industry has an ever-closer bond with the oil and gas sector. Client Earth uses law and diplomacy to hold fossil fuel companies to account. Client Earth lawyers have used the tightening of legislation to hold a number of entities to account. Check out Client Earth’s Greenwashing Files website for more.

Lastly we have to remember why we are doing all this. Earlier this week the New York Times published a multi media ‘showcase’ of climate stories from every country in the world (193 stories). It is a powerful and unflinching look at where we are now, and well worth a deep dive if you were too busy to see it on publication.