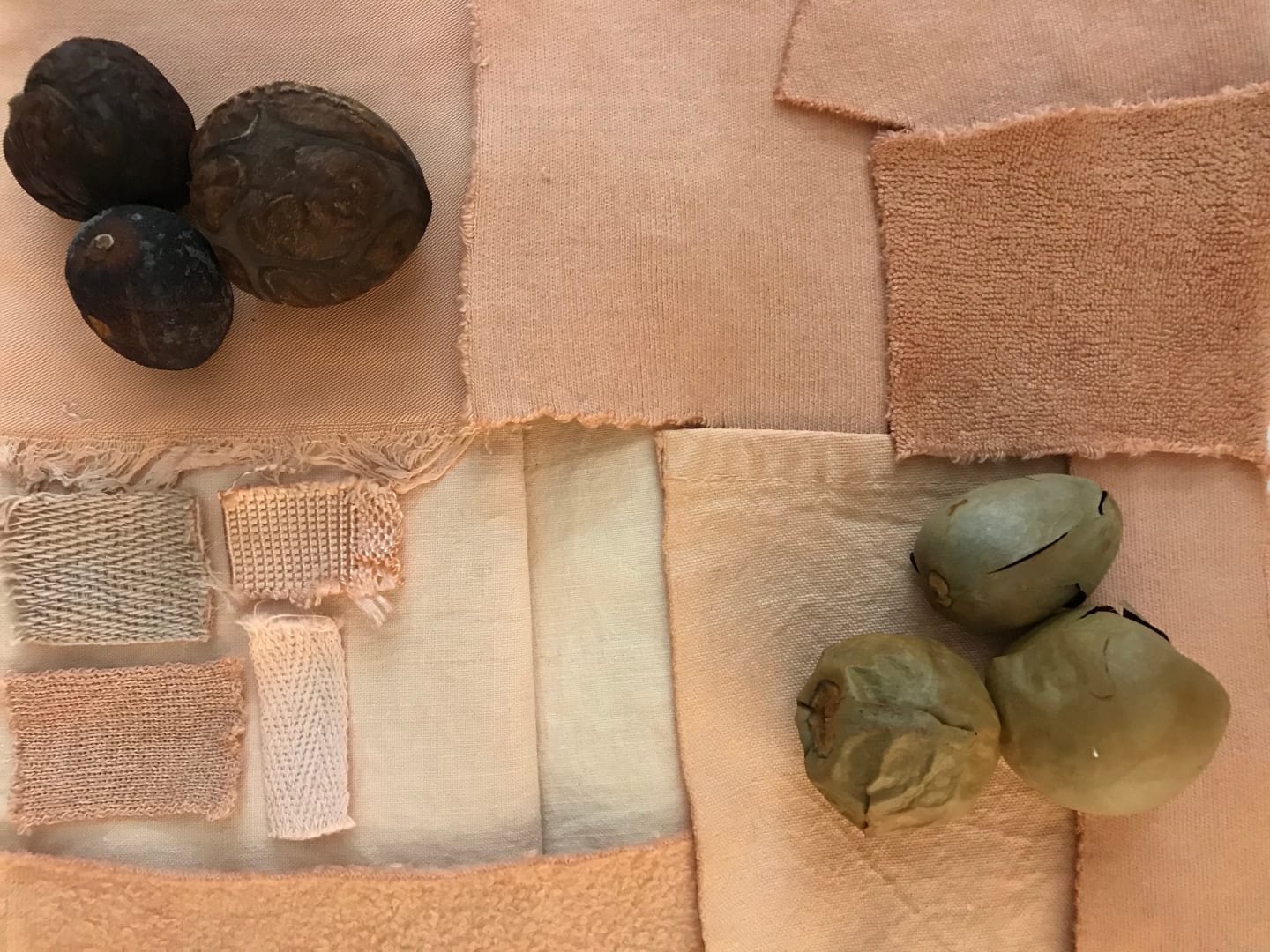 A Day of Natural Dyeing

Our Fashion and Textiles team of two, Charlotte and Philippa, spent a recent Saturday natural dyeing, re-colouring samples and offcuts from their combined fabric collections. Philippa Grogan details their day of dyeing experiments.

Natural dyes are of professional and personal interest to both Charlotte and I, though sadly they have lost some of their relevance in mainstream fashion since the 1850s after William Perkin’s serendipitous discovery of the first chemical dye: mauve. Having discovered our shared enthusiasm for this niche (but rapidly returning) technique, we decided to dedicate some time to explore the possibilities of dyeing with natural and foraged materials. Using a range of plant-based pigments, mostly sourced from Charlotte’s kitchen and garden, we spent the day experimenting with fibres and colours. Here are our key tips and takeaways to achieve the best shades possible. 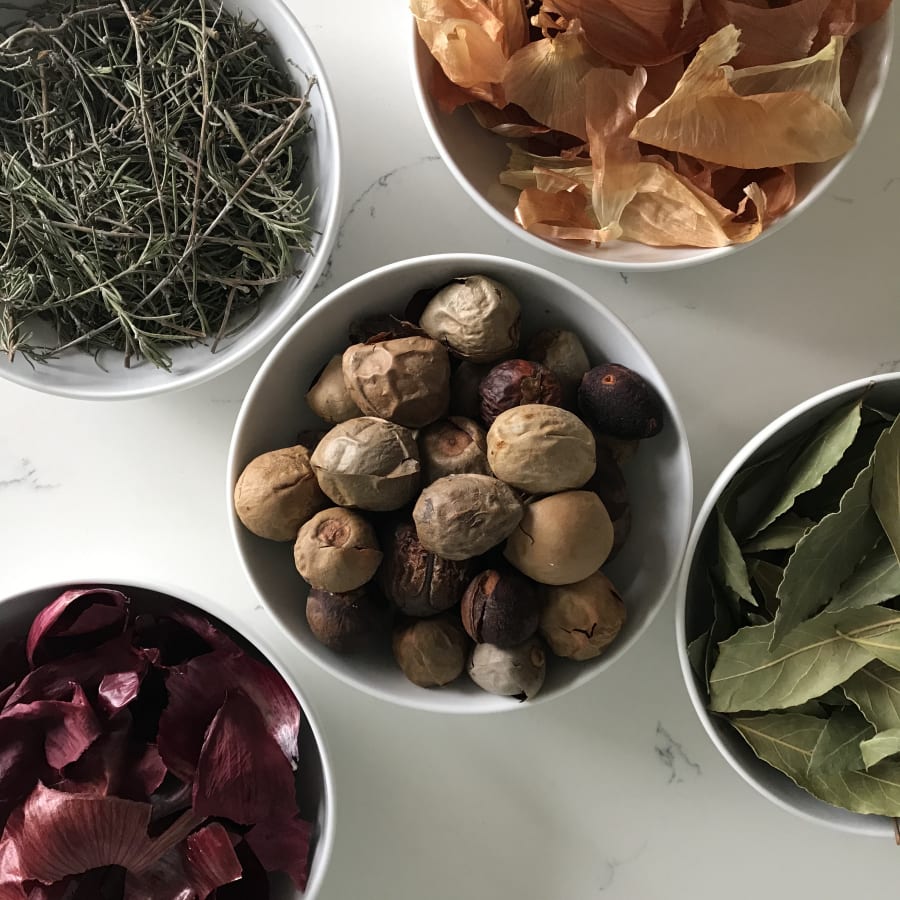 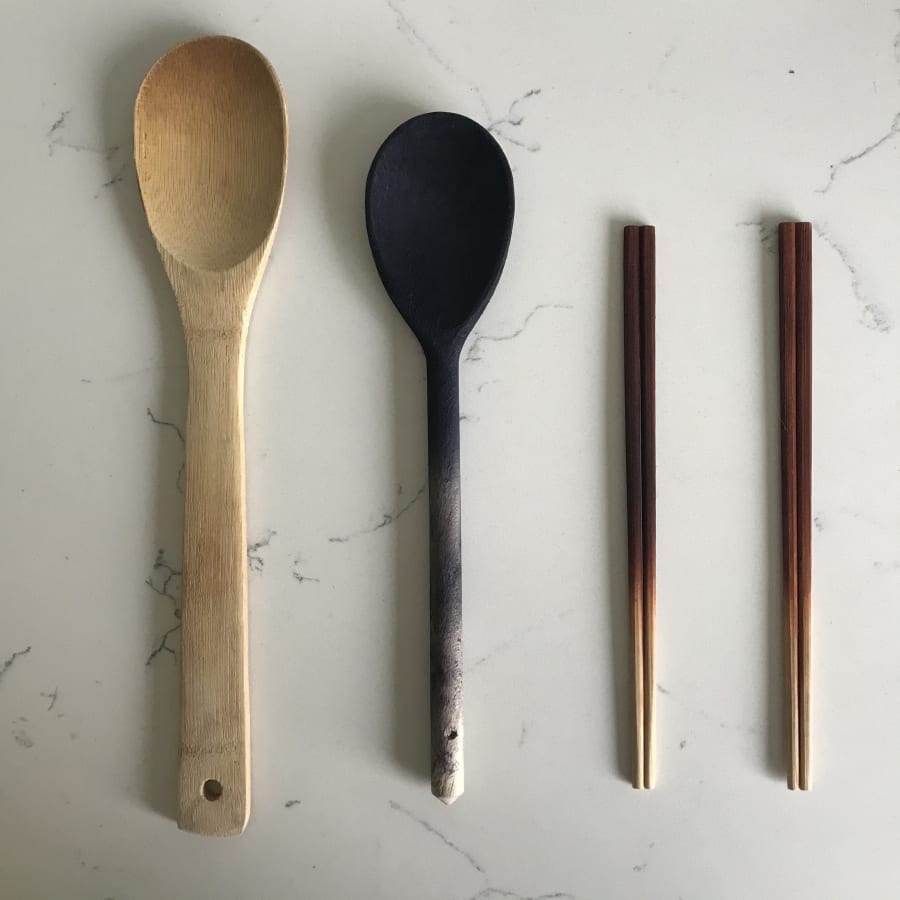 Our fabrics had been pre-mordanted (a chemical soak that helps the dyes to stick) for a few days prior in both potassium aluminium sulphate (alum) and iron, chemicals which can both easily be found online. While using a pure ferrous sulphate is a simple and easy way to mordant with iron, you can also opt for a zero-waste option and make your own from rusty scrap metal. 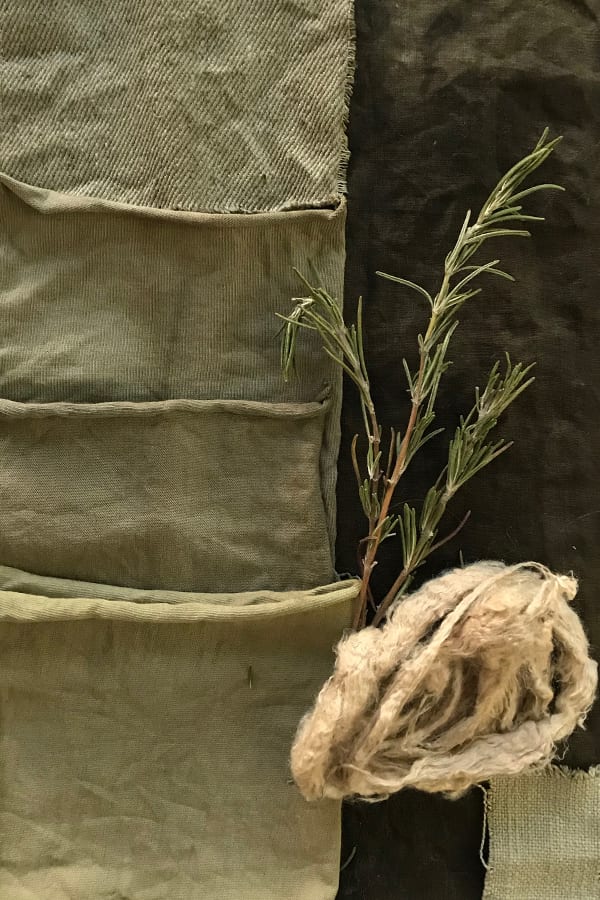 After a quick coffee and planning session, we set to work dyeing an assortment of organic cotton, silks and hemp. We started with rosemary – a dye neither of us had experienced working with before – that had been harvested from a decades-old rosemary bush in Charlotte’s garden. While the rosemary was simmering away, we simultaneously set up a red onion skin dye bath. Again, this was the first time that either of us had dyed with red onion skin – although brown onion skin has long been one of my favourite natural dyes. In addition to the variation of outcomes that dyeing with onion skin can produce, it is also can be grown domestically and without the use of pesticides, and helps to lower food waste.

True to the unpredictable nature of using natural dyes, both produced surprising outcomes. Much to Charlotte’s delight, the rosemary samples had been dyed a multitude of greyish green tones. The red onion skin, bizarrely, had produced shades identical to those of brown onion skin – a dye that I have been experimenting with since 2015! 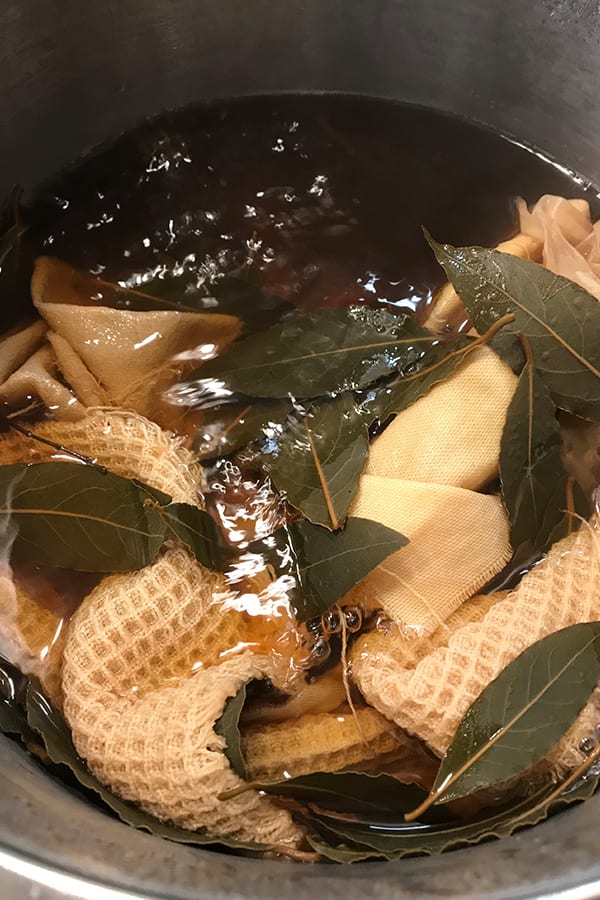 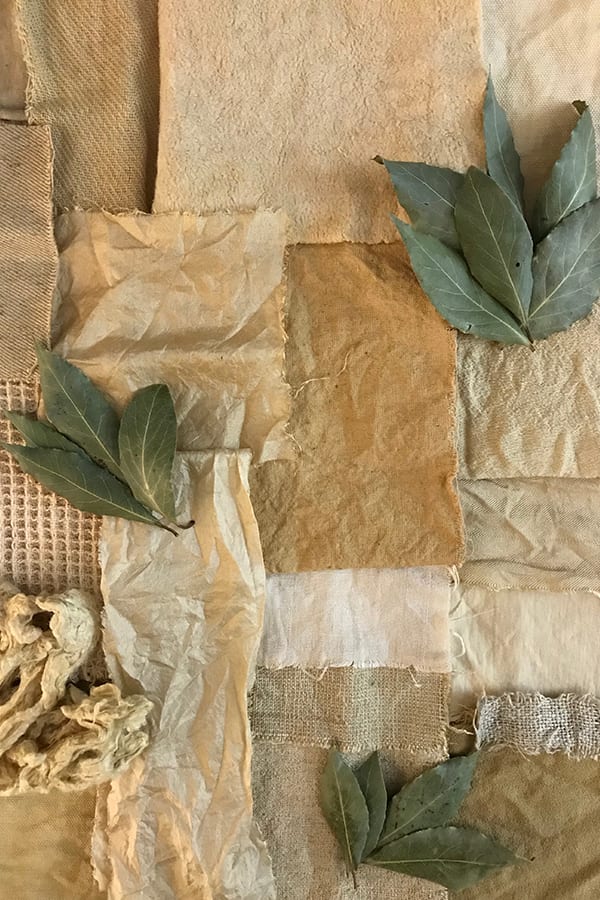 Our next dyes of choice were bay leaves, another gem salvaged from the garden, and eucalyptus. As these sat simmering away, the kitchen adopted an aroma akin to that of a spa – a rare treat in comparison to the likes of dyeing with red cabbage. Neither of us had experimented with bay leaves before and decided to call the resulting colour ‘biscuit’. Dyeing with eucalyptus leaves is much more common, yet still the results never fail to amaze: mordanting with alum brightens the hue to a sunny yellow shade, whilst iron ‘saddens’ the tone and produces an olive-y green tone. 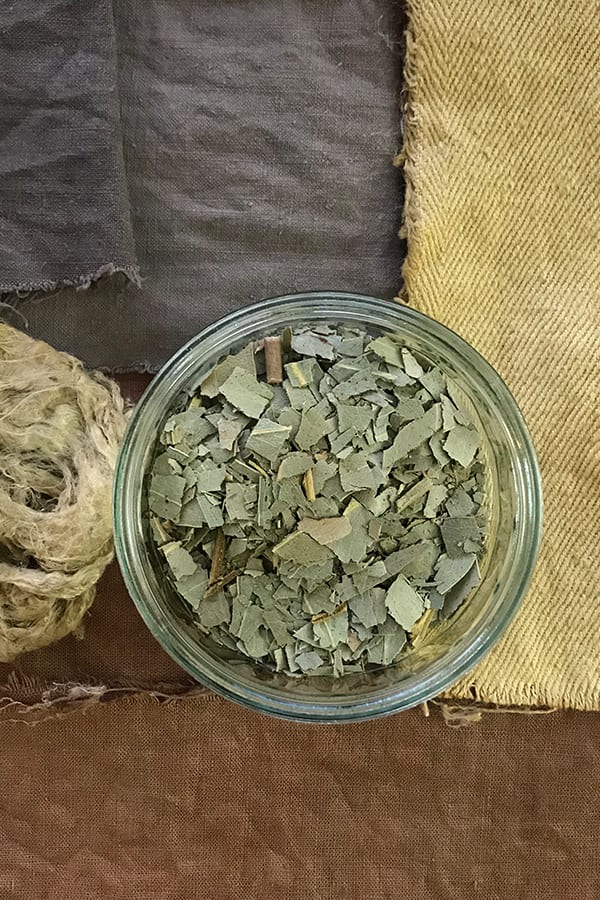 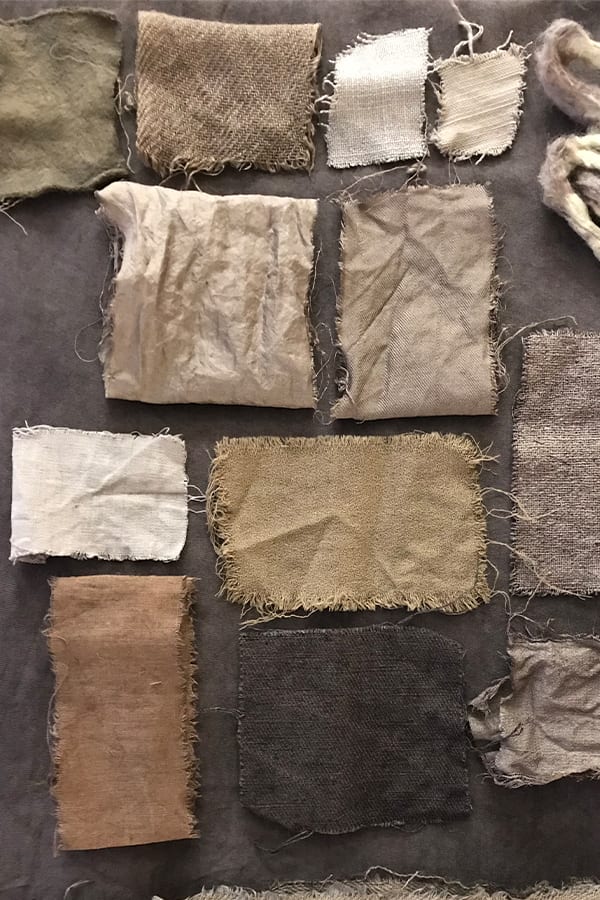 After extracting the samples and hanging them out together, we decided to try one more dye – gall nut. Naturally rich in tannins, the biomolecules that have a strong affinity with protein fibres, dyeing with gall nuts therefore requires less mordant. Sadly these samples were perhaps our least favourite of the day; the gall nut had reacted with iron and produced a deep midnight greyish-purple, while those made with alum had produced a softer stone-grey.

After a full day of natural dyeing, taking in the outcome of our foraged goods, organic materials and dye baths, we took note of the nearing late hours and made plans for our next day of hobs, hemp and hilarity.

Learn about the impacts of toxic dyes and chemicals on the environment.