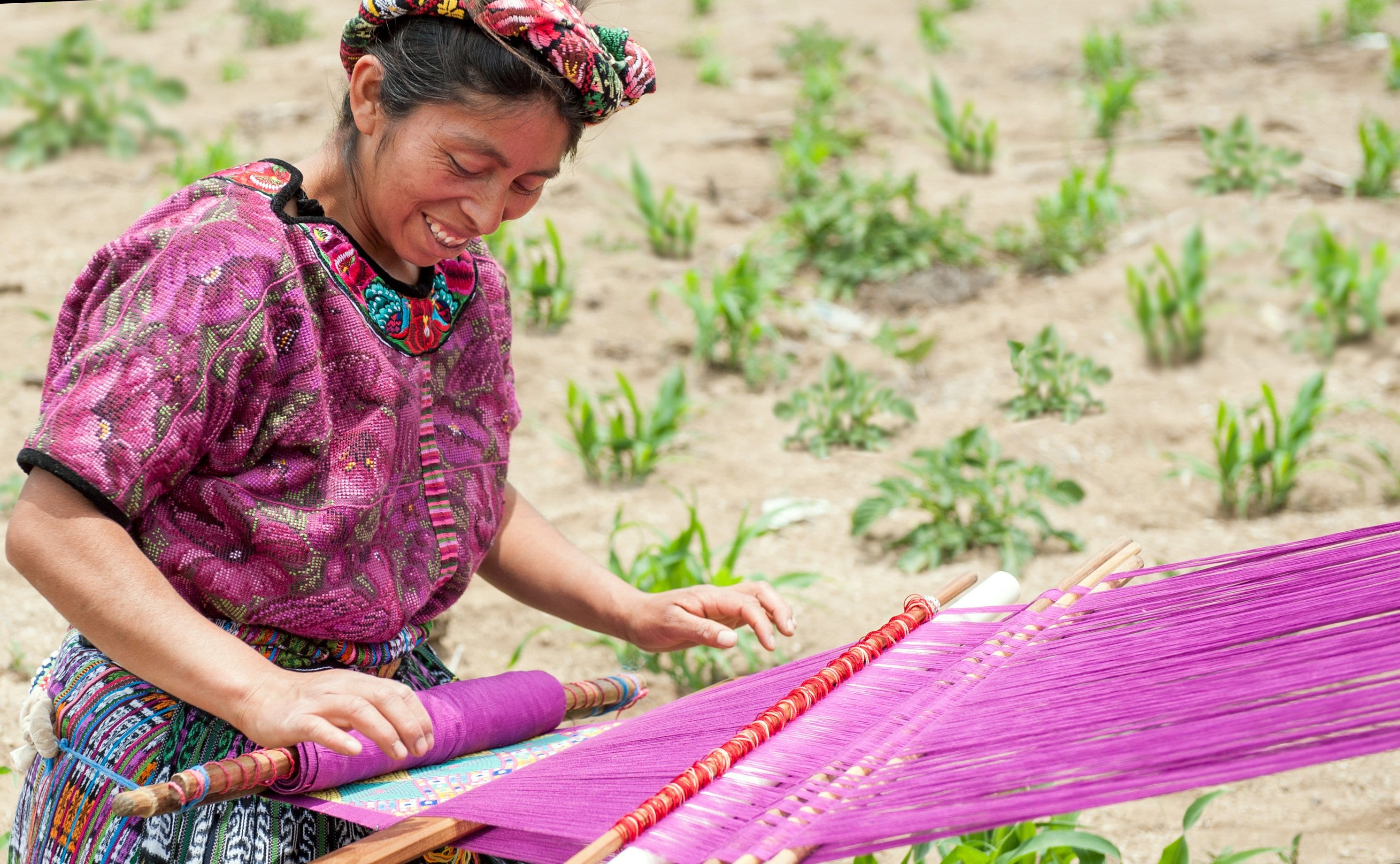 The Brands & Designers Redefining The Way Fashion Works With Artisans

Image: Ixoqui collaborates with female weavers in Guatemala, aiming to bring their creations to a global market; Credit, Ixoqui

Fashion provides the perfect platform to showcase the skills of artisan communities around the world, re-ruralising the local economy and creating employment opportunities that are inherently sustainable. Beatrice Murray-Nag looks at 12 of the designers and brands leading the way in this exciting ecosystem of cross-cultural co-creation.

A universal language of its own, clothing represents a powerful dimension for cross-cultural creativity and communication. The textile industry offers up a common thread capable of weaving relationships between designers and a global community of artisans, often based in the Global South. As well as being an opportunity for ethical employment and sustainable development, fashion has the potential to breathe a new lease of life into traditional crafts and skills around the world by bringing them into an international market.

Yet in the place of collaboration, this relationship is often fraught with exploitation. The luxury fashion industry has long placed European sartorial skill at the centre of its storytelling, meaning the work of international artisans along the supply chain is often hidden away. Meanwhile, the very same fashion houses have been criticised for taking their inspiration from further afield, looking to indigenous cultures and recreating their patterns with little respect for the origins of the craft.

It’s a dynamic that has only recently been questioned, with the Business of Fashion calling out the industry’s ‘respect deficit’ with Indian artisans earlier this year. The scathing report blamed the European fashion industry’s lack of recognition for the hours of work of its many artisans for the dying out of such crafts in India, as new generations sought out different careers. “The embroidery which a ready-to-wear luxury brand is doing doesn’t come out of the blue,” emphasises Oshadi Collective’s Nishanth Chopra, who has set up his Fibershed in India to help local artisans collaborate with the industry in a localised and ethical way. “It’s thousands of artisans working for thousands of hours to make one dress.”

In a time where all voices should be part of the narrative, an ethical approach now means healing fashion’s history of cultural appropriation and appreciation in favour of genuine co-creation. Thankfully, a new generation of designers have set out to do just that, overturning a one-way relationship into something based on learning and collaboration. Instead of simply outsourcing skills, these brands integrate craftspeople into the very essence of what they do, from the design process to the final storytelling. By working together with social enterprises or ethical initiatives, it’s as much about creating employment and upholding the skills of makers around the world as it is about using clothing to build bridges and re-centre the fashion narrative on the human creativity at every step of its supply chain.

Jeanne de Kroon founded Zazi Vintage as a true celebration of the many pairs of hands who make our clothes. Each design shines with the personality of its creators, who form part of different female-focused social enterprises around the world. From intricate Afghan embroidery to brightly woven Uzbek Ikat, the design process is the result of a vibrant co-creation between cultures, led by the craftspeople who input on colour combinations and patterns. An Ethical Fashion Initiative partner, Zazi Vintage goes beyond guaranteeing its artisans fair working conditions, living wages and full transparency, putting its sisterhood of makers at the very heart of its storytelling too.

We Are KAL is an entire ecosystem of artisans around rural India who each work in their own original way. From the nomads of Changthang in the high Himalayas who provide KAL with wool, to the community of women weaving eri (peace) silk in Assam, the brand lets itself be entirely led by the craftspeople it meets and the materials around them. Helping to re-ruralise the economy in India and give artisans the opportunity to work entirely on their own terms, KAL’s production chain is admirably organic. Every step from source to stitch has been thought out to work in harmony with India’s existing cultural heritage and respect the innately sustainable ways of producing that have been underway in the country for years gone by.

Inspired by the remote mountain life where he grew up, Lebanese designer Salim Azzam’s work stems from his rural roots. Clean-cut tailoring is uplifted by the soulful embroidery adorning each piece, embodying Azzam’s intent to revive this heritage skill through his designs. Following the Lebanese civil war, low levels of literacy meant embroidery became a means of creative expression for the local craftswomen, whose hand-sewn stories have since influenced Azzam’s own patterns. Often inspired by folklore and local legends, his products are ‘made in the mountains’ in Azzam’s own studio in the village of Chouf, giving him the opportunity to provide ethical employment to the local women.

Austrian-Nigerian designer Kenneth Ize aims to carve out a space for centuries-old Nigerian craftsmanship in a modern luxury context. He is known for his colourful tailoring, bringing a slice of his background into the global spotlight when supermodel Naomi Campbell herself walked his Paris runway clad in a striped knee-length dress made from Asoke cloth. Having started out working with artisan groups across Nigeria, the designer has recently brought together a community of 30 weavers in the town of Ilorin. The move represents his success in transforming tradition into an opportunity for employment by giving the fabric a modern feel and placing it on the global fashion radar through his work. Keen to reflect the other side of his culture, Ize has also partnered with Tyrolian embroiders in his latest collection.

Ixoqui, meaning ‘woman’ in Maya, was founded by Guatemalan-born Melany de León Romero. True to its name, the brand puts sisterhood at its centre. Indigenous Mayan women, who often belong to poor rural communities and work from home to care for their children, have few opportunities to improve their situation given their poor access to education, early marriage and high birth rates. By working with cooperatives of female artisans, Ixoqui helps them use their unique traditional skills to earn a steady income through access to an international market. Relying on the creativity, experience and spirit of its makers, each Ixoqui design tells its own story through sustainable local materials.

At once a social enterprise and a certified B-Corp, SEP Jordan’s embroidered accessories are hand stitched by talented Palestinian, Syrian and Jordanian women, who happen to be refugees. Working largely in the Jerash ‘Gaza’ Camp area in the North of Jordan, it aims to help bring families above the poverty line by turning traditional craftsmanship into a path to economic empowerment. Each artist in the making is trained at the SEP-Tamari Foundation Academy, before being employed by the company who pay weekly wages, higher than the market rates. Its iconic product is the ‘keffiyeh,’ of which no two are ever the same. The creativity is all down to its maker; each craftswoman chooses her own colours and pattern, imbuing it with her distinctive personality, emotions and taste.

True to her Italian-Haitian roots, Stella Jean’s collections are filled with vibrant cultural fusions that unite makers from around the world. What started in her home territory of Haiti has since taken the designer to Benin, Syria, Pakistan and more, working with artisan collectives to transform their cultural heritage into an opportunity for ethical employment. Jean calls her business model a ‘Laboratorio delle Nazioni’ (Laboratory of Nations), referring to the countless hands of women in different countries coming together to co-create each garment. Her vibrant human-centric supply chain provides economic autonomy to the women at every stage, augmenting the value of traditional handicraft skills.

For Amy Yeong, Orenda Tribe represents a journey back home to her native culture. The indigenous designer travelled to her birthplace, New Mexico, from LA, simultaneously swapping her job designing for a fast fashion brand in favour of handmade or upcycled treasures. Reconnecting to her Diné roots has seen Yeong collaborate with indigenous artisans from her community; from the colourful co-ords woven from Oaxacan peddle-loomed cloth to the tie-dyed tees made in collaboration with fellow Diné artists Nihi Designs. The brand is more than just a homage to her Native American heritage, Orenda Tribe has multiple campaigns aimed at supporting the people of Dinéta, helping to preserve their native lands, protect against domestic violence and, most recently, bring them critical aid during the pandemic.

Stelar is a brand built with empathy and empowerment at its heart, connecting its customers with the story and culture behind each item they purchase. It works with local weaving communities in Bali, whose indigenous wisdom and inherently sustainable ways continue to shape its founder’s own vision. Each bag comes with a code that shares the story of the artisan who made it, setting out to build cross-cultural connection based on human relationships. By supporting these craft communities and reinstating the relevance of their skills today, the brand aims to show how solutions for regeneration and sustainability can be found be looking back to ancient customs.

This year’s GCFA Best Independent Designer winner Sindiso Khumalo dedicated her award to the community of amazing artisans she works with – an ode to the women in South Africa and Burkina Faso who produce the hand-woven and hand-embroidered textiles for her collections. Khumalo sets out to empower most vulnerable in our society through both the manufacturing and messaging of her designs, which have a strong emphasis on African storytelling. Working with the UN Ethical Fashion Initiative, she has been able to connect with craftspeople around the continent and create a clothing line that addresses injustice with every element of its being.

Christy Dawn’s vision for cross-cultural creation began right at the start of its supply chain. The US-based brand partnered with Oshadi Collective to create a selection of designs from seed to stitch, including the plantation of a regenerative cotton farm in Tamil Nadu, India. Alongside reviving agricultural knowledge that dates back decades, the farm forms the heart of a Fibershed in which materials are spun, woven, dyed and printed by local artisans all living within a 20 km radius. Based on the rebuilding of a rural economy, Oshadi uses techniques which are inherently sustainable, such as natural dying and block printing with plant pigments – the delicate beauty of which can be seen in Christy Dawn’s latest Natural Fibers Collection.

Coming from a family lineage of textiles and design that started in Bolivia and then Argentina, Carolina Kleinman found inspiration for her namesake brand in a community of artisans in the town of Tepoztlan, Mexico. She began working with artisan cooperatives there fifteen years ago, before connecting with craftspeople in the remote regions of La Paz, Bolivia, and Peru as well. Her desire to preserve the history and culture of these communities is a vital part of the Carolina K philosophy, and the handicraft of each different culture shines through in every design. Garments are typically rich in embroidery and made from natural materials, letting traditional craftsmanship take centre stage.

Chaos and Colour works with the Saheli Women, a non-profit social enterprise based in the rural village of Bhikamkor set up to give the local women an opportunity to learn the skills of embroidery and find financial independence. Each piece in the brand’s vibrant collection is bursting with multiple personalities; its founder Pariss Cozier’s playful love of colour, and the Saheli Women’s unlimited creativity which imbues every piece with its maker’s personal story. Swapping a conventional customer and supplier relationship for a real creative collaboration, Chaos and Colour turns fashion’s historically colonial manufacturing system on its head, instead representing the story of both designer and manufacturer in each garment.

Preserving The Art Of Natural Block Printing In Bagru, India
All That Glitters Is Not Gold
Calculating The Carbon Footprint of a Handbag: A Lesson from BEEN London
Make The Label Count