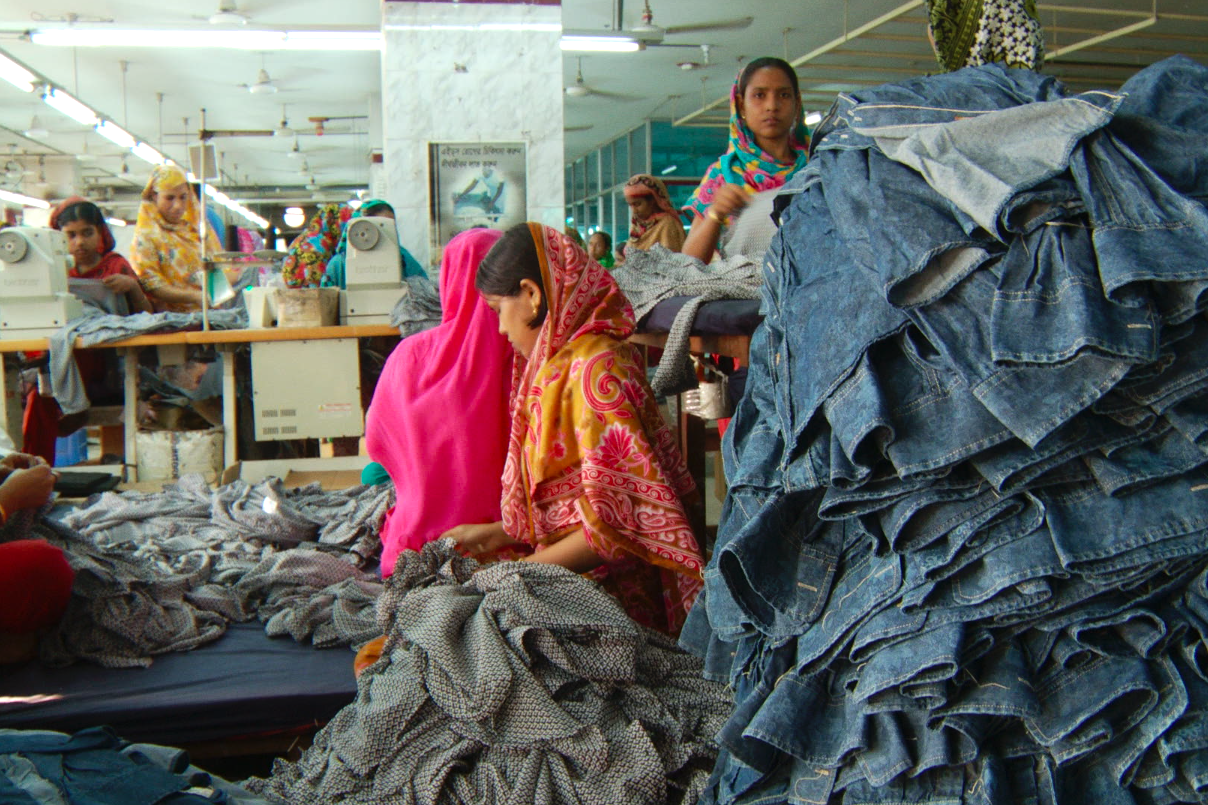 In the latest addition to the Fashionscapes series on fashion’s just and ecological future, Livia Firth and Andrew Morgan once again have joined forces to follow an alliance of women in a bid to end poverty wages in fashion.

Often cited as a catalytic introduction to the fight against fast fashion, the release of The True Cost documentary in 2015 shed a much-needed spotlight on the industry’s impact on both people and planet. Now, on the eighth anniversary of the Rana Plaza tragedy , director Andrew Morgan and producer Livia Firth are once again joining forces to release Fashionscapes: A Living Wage. In the fourth of the investigate series, the film looks to document how the fashion supply chain has entrapped millions of garment workers around the globe within a cycle of poverty.

Following the stories of both activists fighting the system and the women working within it, the film highlights the urgent demand for coordinated, structured change within an industry that has long since prioritised profit over people. What is evidenced is that of the fast fashion industry’s ‘race to the bottom’, with growing expectations for clothing to be cheap and fast having increased demand for ever-cheaper sources of labour.

Among those calling time on poverty wages is global NGO, The Circle – a collective of women advocating for female economic empowerment. Following the publication of its most recent report proposing EU legislation for a living wage, the film gives voice to the need for legislation to address the structural deficiencies of the industry. Paving the way is Jessica Simor QC, a human rights lawyer and author of Fashion Focus: A Proposal for New EU Legislation on a Living Wage. Simor’s work into legal action looks to remove the excuse of monetary ambiguity, and instead ask: “How do we ensure that there is a living wage?” 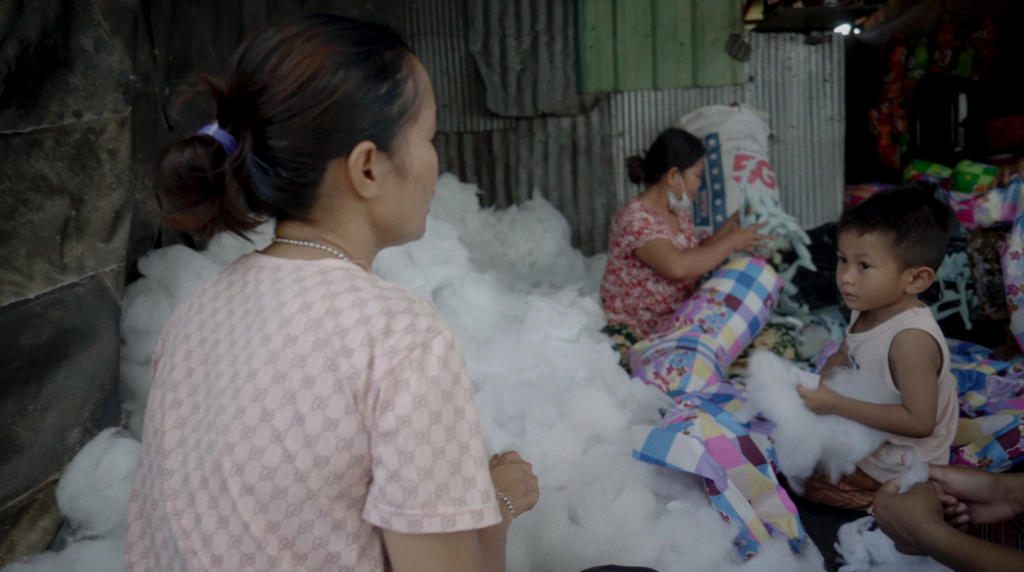 It is this lack of legal clarity that has led to as many as 60 to 80 million garment workers, most of whom are women, living in poverty. For many, salaries are determined by a country’s legal minimum wage, an hourly remuneration that is often too low to ensure a decent life. What is required, instead, is the payment of a living wage. Recognised by the UN as a fundamental human right, this suggestive wage ensures workers are able to live to a satisfactory standard, enabling the affordance of basic needs such as proper shelter, food, healthcare and education. “For obvious reasons, a minimum wage should not be less than a living wage,” says Simor. The gap between the two, however, is increasing. Research conducted by Labour Behind the Label in 2019 showed the disparity across both Asian and European garment producing countries to be as low as 10%.

The effects of such have rippled across the garment industry for the past two decades, something labour union activist Kalpona Akter knows only too well. In conversation with Livia Firth throughout the film, Akter documents the destitution faced by many garment workers, including her younger self. “If my mum had got a living wage, I would not have ended up a child labourer working in the factory, making six dollars a month and working over 400 hours.” Akter goes on to detail the abuse that often incites from such exploitative work, recalling physical abuse from supervisors and standing for hours on end, without respite. “There are no cheap clothes,” she goes on to say. “There is nothing cheap, someone always needs to pay for that. And who is it? It is the workers.”

Hover over the map to reveal the suggested living wage in some of the largest garment producing countries. 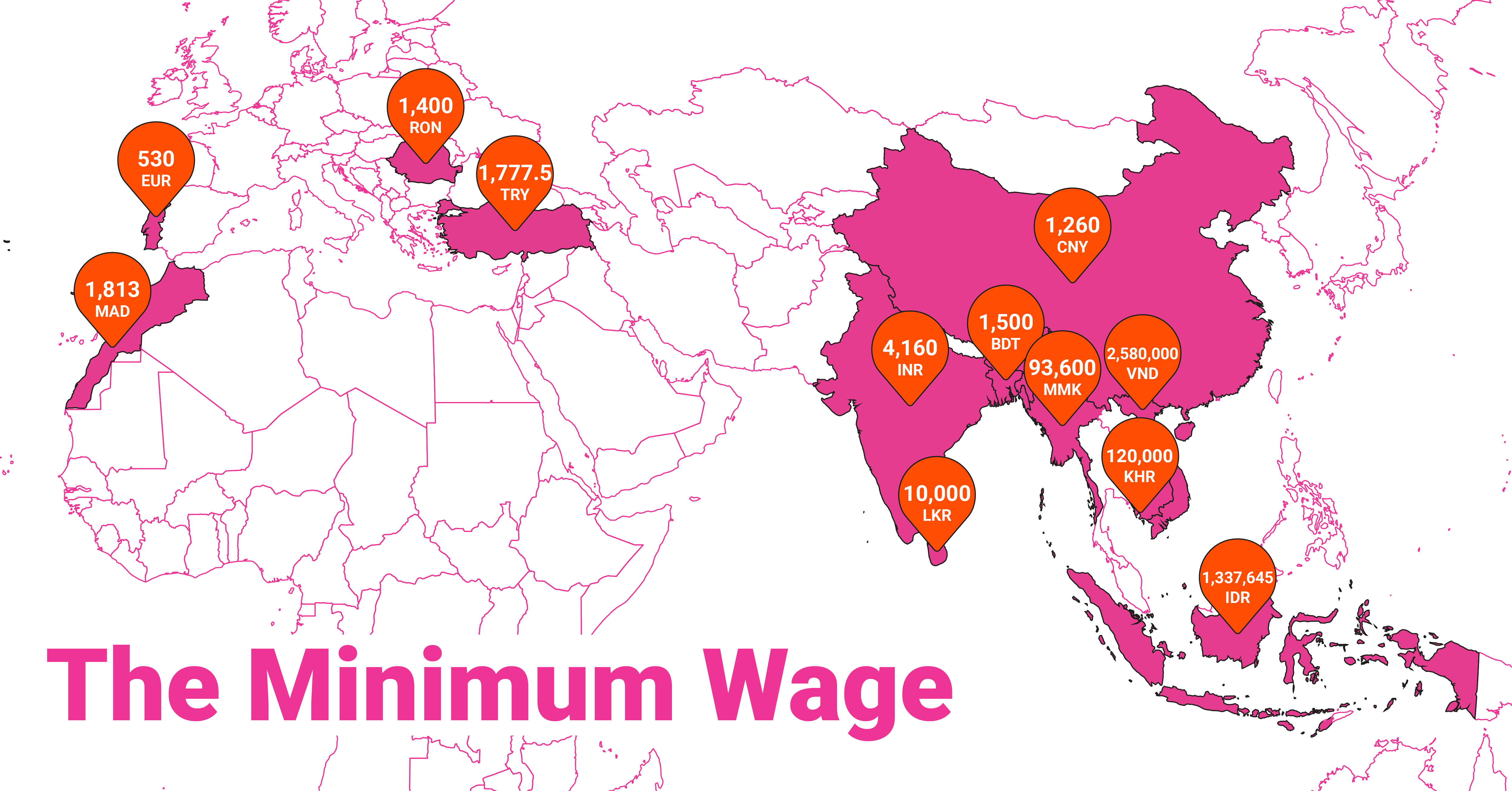 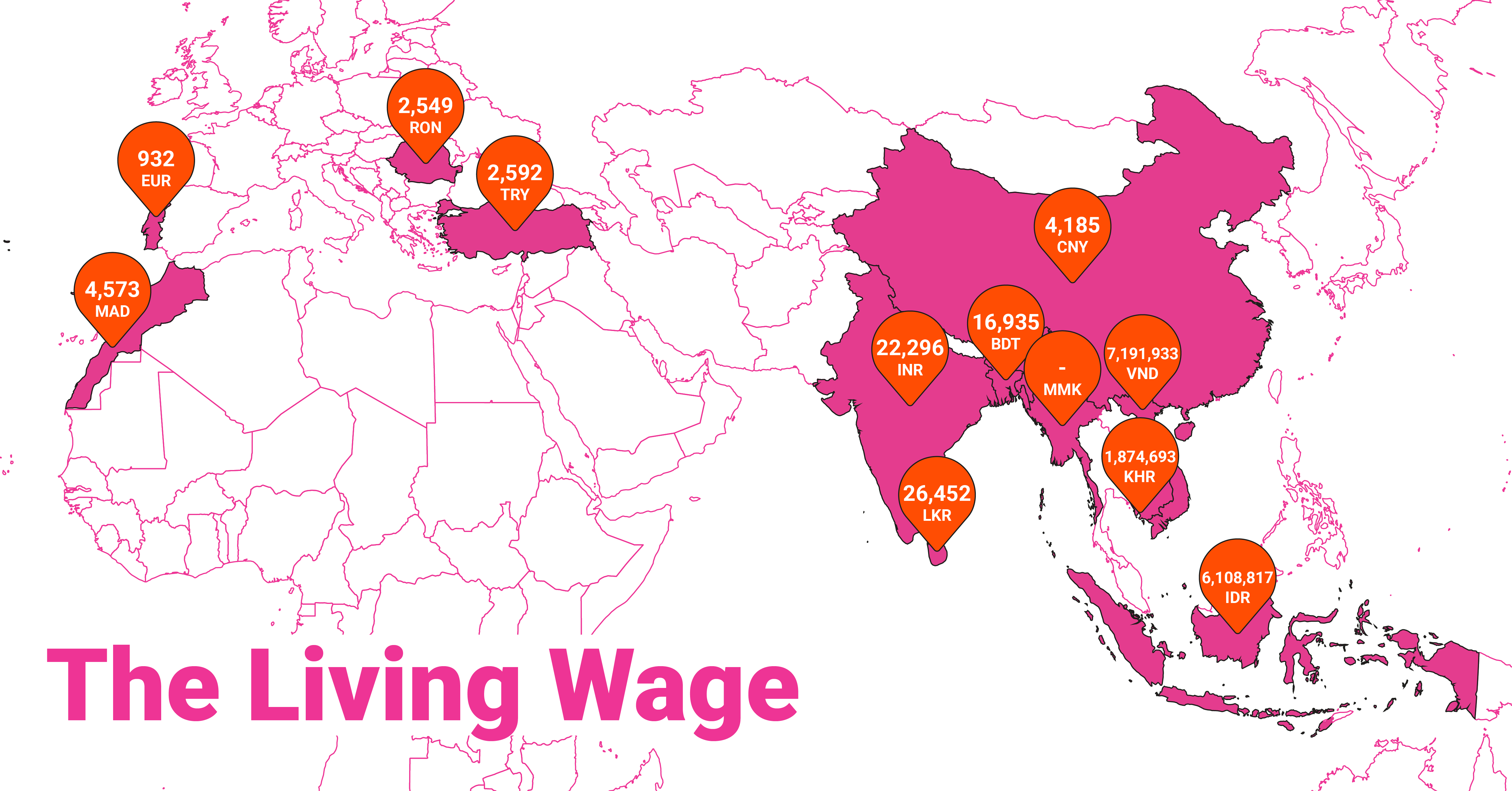 The monthly minimum and living wages in garment producing countries.
Taken from Fashion Focus: The Fundamental Right to a Living Wage, The Circle. 2017

The conversation around the payment of a living wage is not a new one. Documented as far back as 1919 in the signing of the Treaty of Versaille, records dictate the “fundamental right for the payment of a wage adequate to maintain a reasonable standard of life.” Over the past century, this sentiment has been echoed universally within human rights declarations and social charters, each documenting the right to satisfactory wages and working conditions. How, then, does a system that looks to keep garment workers in poverty continue to thrive? For Thulsi Narayanasamy, a business and human rights researcher and key voice within Fashionscapes: A Living Wage, it is about accountability. “There is nothing at this point that says to brands, ‘You have to lift the wage.’”

Despite growing awareness of fashion’s unethical practices, research suggests that almost none of the major fashion players are yet to prove all workers in their supply chain earn a living wage. For the garment workers on the ground, increasing living costs are spreading already impoverish wages even thinner. “Where do the clothes come from?” queries Mim, a worker in Bangladesh whose story features in the film. “We work hard without eating and sleeping – it’s not enough. A family requires a lot of expenses.”

Such abuse is not exclusive to that of only the largest garment producing countries in the world. Last year, fast fashion giant Boohoo faced modern slavery investigations following an undercover report into the payment of its garment workers based here in the UK. Wages were reported to be as little as £3.50 an hour, a mere 36% of the Living Wage Foundation’s suggested £9.50. The publication of this, however, looks to have changed very little by the way of Boohoo’s exploitation of workers, with an investigation by The Guardian in December 2020 having found the fast fashion company to be paying workers as little as 29p an hour in a Pakistani garment factory. 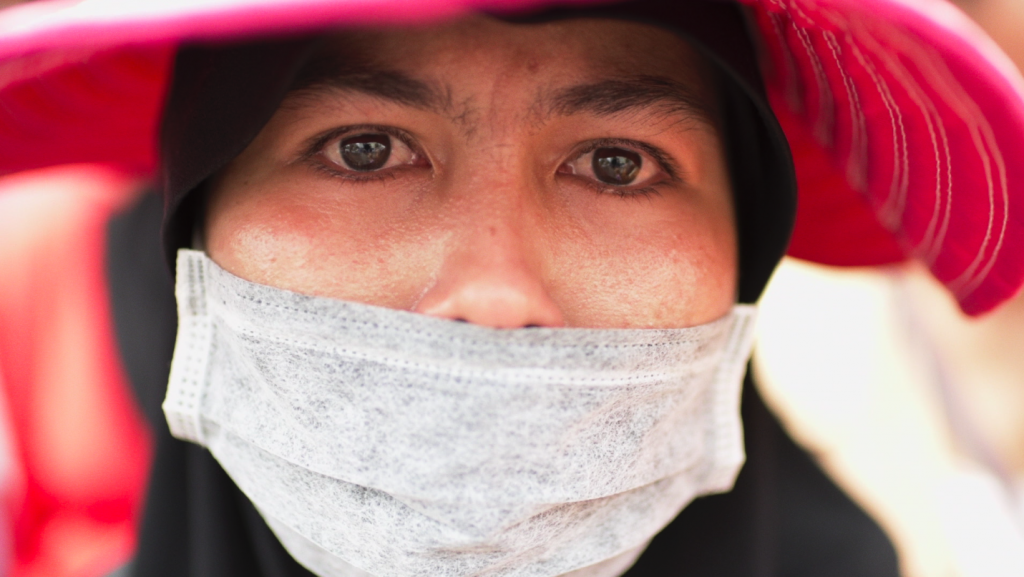 The impacts of the global coronavirus pandemic also cannot go ignored, with the closing of stores around the world having left thousands of garment workers without jobs or pay. As fast fashion brands cancelled or refused to pay an estimated $16.2bn worth of orders, the lack of economic support both prior and during the pandemic was dilapidating for many. Unsurprisingly, the sudden fall in income led to reported growing hunger and food insecurity. In a report by Workers Rights, it was estimated that, in November 2020, as many as 77% of workers reported hunger on a daily basis; and 88%had drastically reduced the amount of food they and their family members consumed and/or skipped meals. Filmed one year on from the onslaught of factory closures, Fashionscapes: A Living Wage presents a case for the stability a living wage would offer. “When stores closed in the developed world, suddenly [garment workers] were destitute. They never earned enough to live on, to be able to ensure that they had any kind of economic buffer,” says Narayanasamy.

For Livia Firth, the combined work of The Circle’s proposed EU legislation and the latest instalment of Fashionscapes is a glimmer of tangible hope for those working in the garment industry. Legislation, she hopes, can hold brands and retailers to account. “The time for awareness has passed, and the great opportunity before us now is for true transformation.”

Anya Hindmarch: Fashion Must Shift Towards Circularity
Livia Firth in Conversation with Satish Kumar: “Every Crisis is an Opportunity”
Why Plastic Is A Wealth, Not A Waste
Eco-Age Launches the Eco-Verse