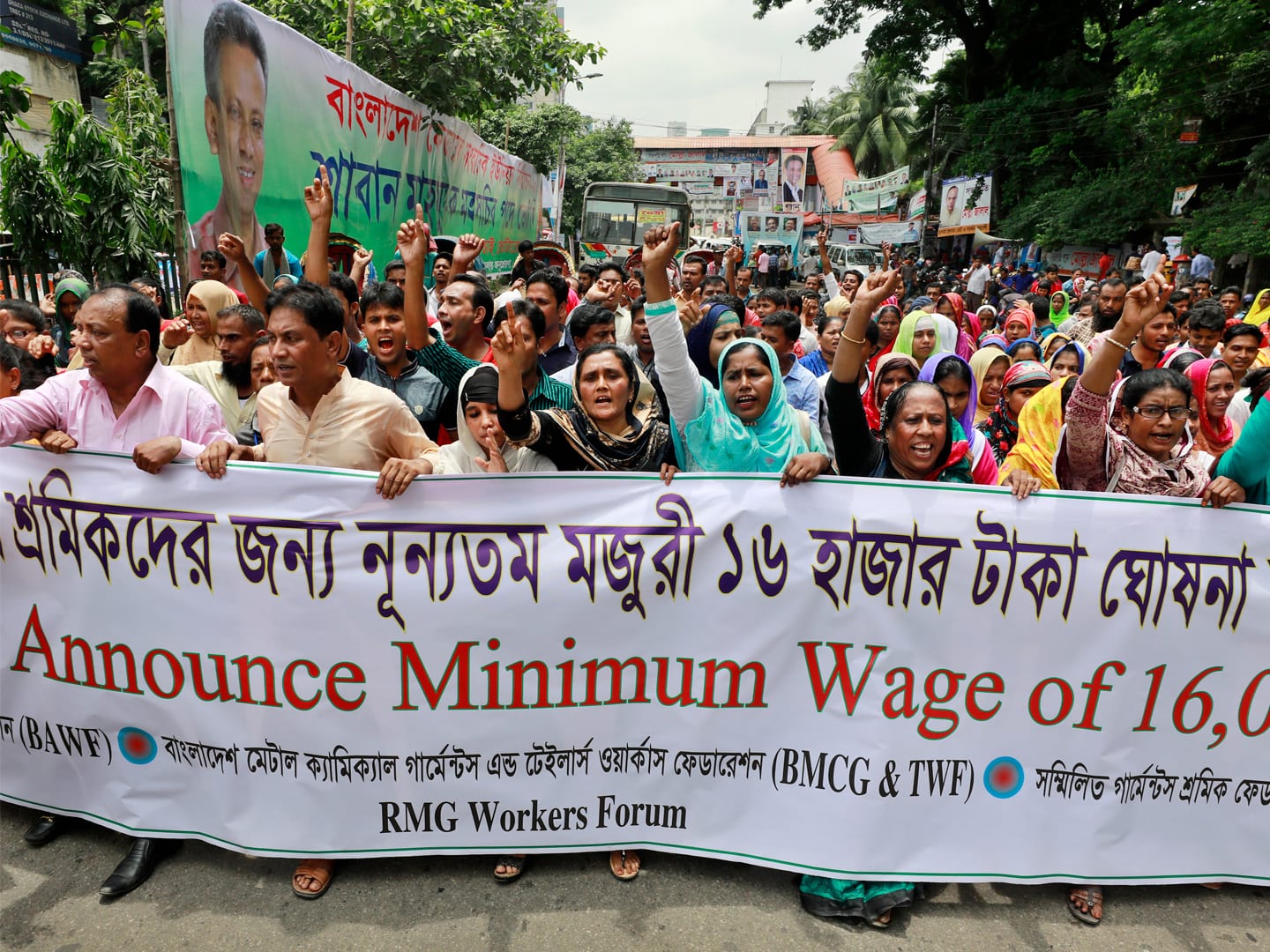 How Far Have We Actually Come in our Fight to Change Fast Fashion?

With Earth Day and Fashion Revolution week now in the past, Beatrice Murray-Nag looks at both the human and environmental costs of fast fashion, calling out the lack of concrete change seen in recent years and emphasising the need for better practices going forward.

What a week. For many of us, the convergence of Earth Day with Fashion Revolution week felt akin to a rare and symbolic aligning of two planets. For a brief yet glorious moment, conversations around sustainability and fashion felt commonplace, and it seemed like almost everybody had something to say on the issue. If Instagram posts were a viable metric to measure the growth of a movement, our anti-fast fashion rhetoric might have seemed louder than ever.

Yet in Dhaka, Bangladesh, a very different kind of action was taking place. Seven years on from the collapse of the Rana Plaza garment factory, the friends and families of those who lost their lives stood defiant on the rubble, still searching for justice for their loved ones. Elsewhere in the city, a similar line of sari-clad women sat facing the oncoming traffic in the middle of a busy road, protesting their yet-to-be-paid March wages. Past and present converged as two uncannily similar battles were fought side by side in Bangladesh’s capital, bringing to light an unsettling truth. The livelihoods of garment workers were once again being threatened by fast fashion brands’ total indifference to the human cost of their business model.

The side-by-side protests pose one clear question: despite years of campaigning at various levels across the fashion supply chain, has fast fashion really failed to evolve at all? And what, if any, changes have been made to reduce the industry’s enormous impact on both people and planet? 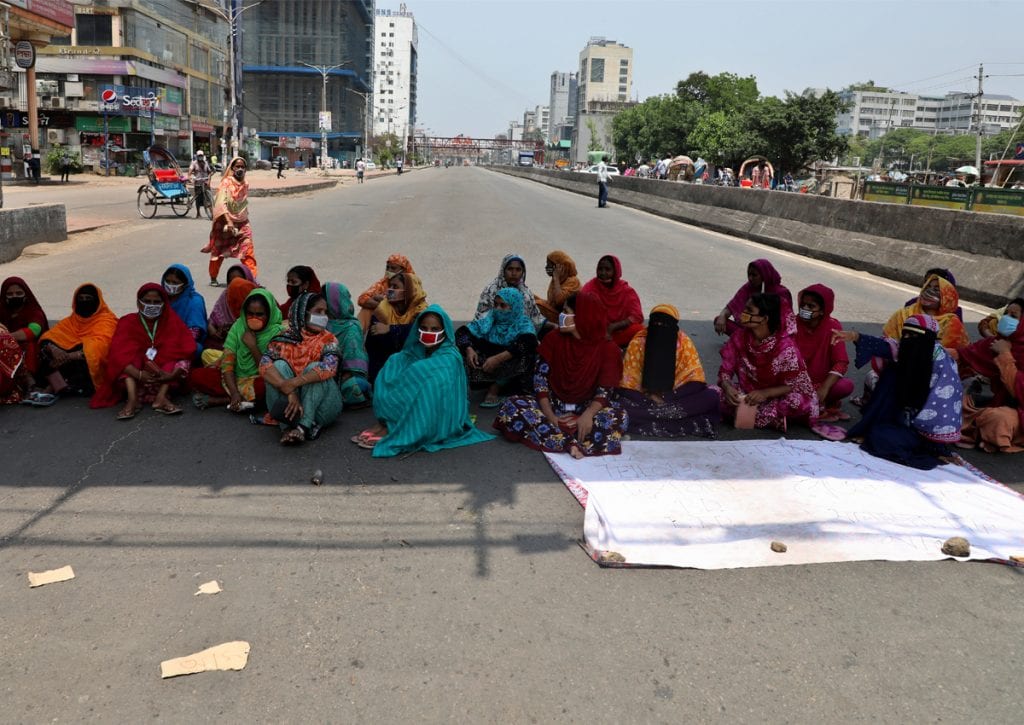 As far as garment workers are concerned, what might have been positive short-term steps forward already seem to be receding. “Working conditions did improve after the disaster thanks to a binding agreement for safety that several hundred signed,” explains Dana Thomas, author of the acclaimed Fashionopolis book. However, the Bangladesh Accord on Fire and Building Safety – which was put in place in May 2013 following the Rana Plaza disaster – was ordered to cease its operations by the Bangladesh government in 2018. Following a series of court hearings, the Accord is eventually due to give way to the RMG Sustainability Council next month. However, a recent US Senate report has already expressed concern as to whether the duties will be upheld in the same manner.

“Now, with the onset of Covid-19 and the global quarantine that has followed, Bangladesh’s apparel workers are in even greater peril,” continues Thomas. “Brands have cancelled orders and some refuse to pay for those that have been filled; containers of finished clothes sit on the docks. Worse, workers are being sent home without pay. During the protests last week, one said she had not been paid in two months and could not afford to eat. As one NGO advocate told me, when the Bangladesh apparel industry takes one step forward, it then takes two steps back. And this is where we are now.”

However, perhaps the onset of Covid-19 has simply brought the deep-set flaws that have long been in existence within the fast fashion supply chain to light, in a similar way to Rana Plaza. After all, even beyond Bangladesh, many other manufacturing hotspots in the Global South have long left much to be desired in terms of working conditions. Perhaps Cambodia was the most recent to make headlines, when the EU withdrew its trade privileges earlier this year due to repeated human rights violations along the supply chain. Back in January, brands including Nike, Adidas and Levi Strauss were compelled to write to the country’s Minister to demand better labour standards, following reports of mass fainting in garment factories. And lest we forget that it was only last year when dozens were hurt in a clash in Myanmar when a union of garment workers organised a strike to protest abuse from managers, limited toilet breaks and unbearably hot working conditions. Perhaps the icing on this not-so-palatable cake is a report from Clean Clothes Campaign in June last year, which found that no major global clothing brand has actually been able to show that garment workers in Asia, Africa, Central America and Eastern Europe are being paid enough to escape the poverty trap.

“We are alert to the issues at stake here: run down services and the impacts of flawed economics, undermining a basic respect for our fellow citizens” explains Tamara Cincik, CEO of Fashion Roundtable, offering her expertise on the issue. “Many of these issues parallel those of the awful Rana Plaza tragedy: if we do not safeguard workers, if we run down services and allow flawed systems to continue as company practice, we are all accountable. What we sow, we reap.” 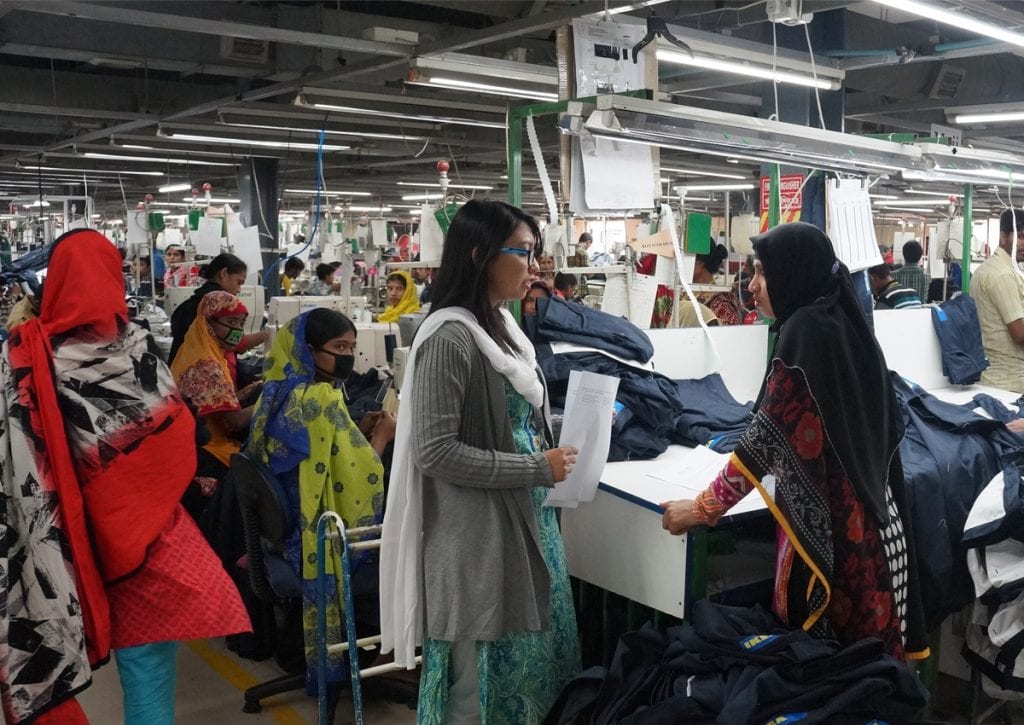 Image: Accord staff adress safety and health issues in a Bangladesh garment factory, Credit: Bangladesh Accord

Fast fashion’s globalised, low-cost manufacturing system continues to cause problems not just on a human rights level but on an environmental one too. Just this month, a Nature Reviews Earth & Environment report attempted to quantify the cost of fast fashion on the planet by analysing the value chain from production to consumption. The research highlighted the effects of the convoluted global supply chain, drawing attention to the fact that “garments can have travelled around the globe once or even several times during the many manufacturing steps in turning raw fibre cultivation into a ready outfit.”

The excessive transportation of items is just one of many factors to blame for the four to five billion tonnes of carbon that the report estimates the fashion industry produces annually – a number that has shown no sign of slowing down. Add to that the excessive water consumption (79 trillion litres per year), chemical use (15,000 types used across the supply chain), textile waste (92 million tonnes per year) and microplastic pollution (190,000 tonnes annually) and it’s clear that the fast fashion industry continues to pose a substantial threat to the planet.

The report outlines scaling back production, cutting waste and closing the loop as concrete ways for fast fashion to reduce its environmental impact. However, it offers little statistical evidence as to the widespread implementation of these measures so far, instead focusing on making a case for their adoption in the future. “With public attention now very much on the climate crisis, environmental degradation and sustainability more broadly,” it outlines, “the industry is being forced to seek more sustainable practices.” 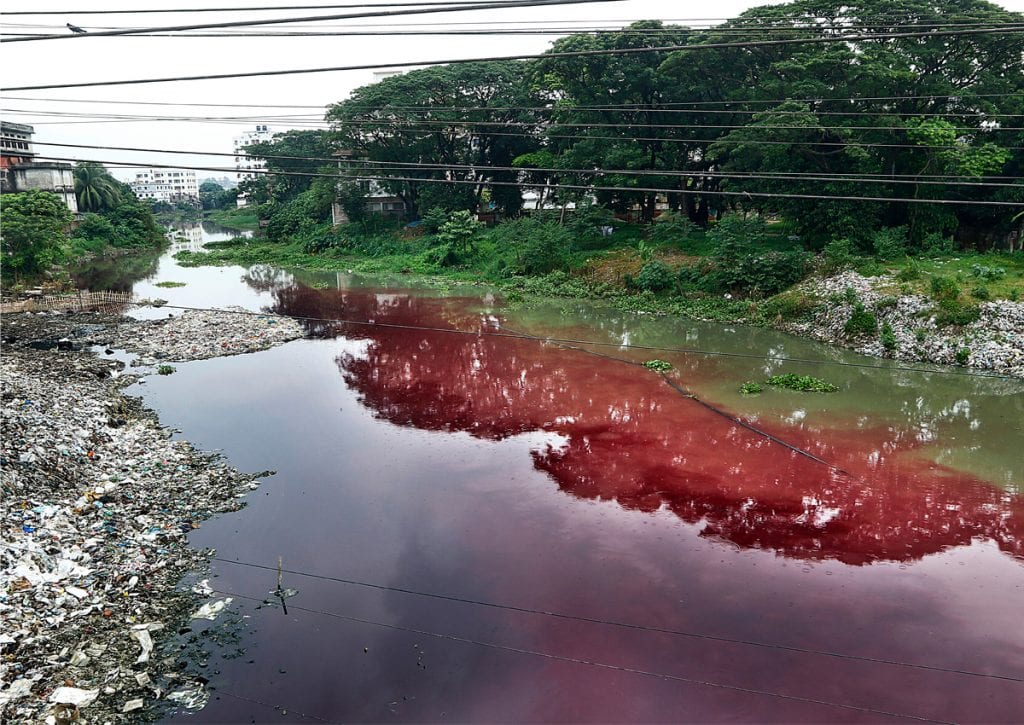 Image: The purple colour of Karnopara Canal’s in the outskirts of Dhaka has turned purple colour due to discharge of waste water from nearby dyeing factories, Credit: Shutterstock

So, where do we go from here? Well, the future of fast fashion is threefold, dependent on customer, legal and industry action. The good news is that as the climate conversation grows, the increasing consumer pressure might be a vehicle to slowing down the industry. According to Lyst’s first ever Conscious Fashion Report, the term ‘slow fashion’ has been responsible for over 90 million social impressions over the last 12 months, “suggesting the beginning of a shift in shopping behaviours.” However, fast fashion is far from out of the picture; while Lyst searches for sustainable swimwear were up 65% year-on-year, the most sought-after piece was still an ASOS bikini made from virgin polyester and elastane.

What it does illustrate, however, is that progress might be slow but our anti-fast fashion advocacy is certainly not falling on deaf ears. It is still very much in our hands to us to raise awareness about both the human and environmental cost of the industry, inspiring the collective action needed to change the deep-set paradigms. “It is time to speak up and call out [broken systems],” urges Tamara Cincik, “whether that is slavery in supply chains, or policies which do not support all within our communities – now more than ever.”

The second point of call is legislative action – an area that has hitherto yielded mixed results. “There are no concrete changes in the fast fashion industry that I would applaud or call positive,” comments sustainable fashion writer and activist Aja Barber. “The reason for this is because there are no guidelines or regulation for brands, and so they can do whatever they want and call it ‘sustainability’ even when their business model fails to reflect anything of the sort. It was very disappointing last year when the UK Parliament soundly rejected the Fixing Fashion Report, which had a lot of easy to implement suggestions. As we know brands cannot be trusted to regulate themselves because they haven’t done so up to this point.” 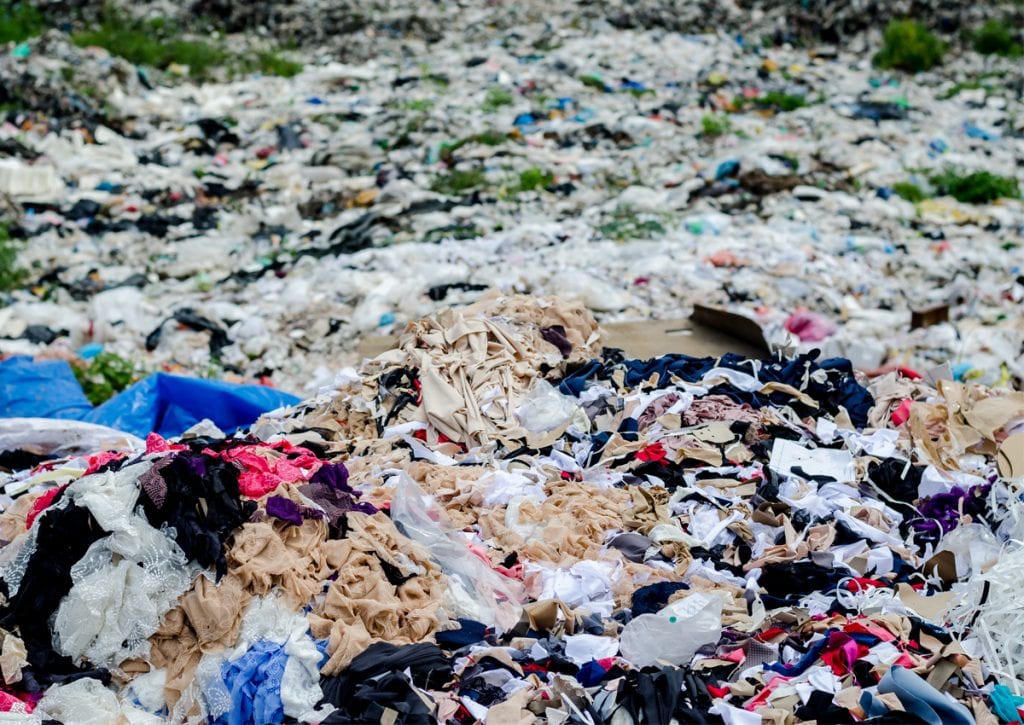 Image: An accumulation of textile waste in the Tak Province of Thailand

Nonetheless, there are certainly positive signs worth highlighting here too. One such initiative is the Living Wage Project by The Lawyers Circle, a group within The Circle NGO. The group published their ‘Fashion Focus: Towards A Framework For A Living Wage’ report in November last year, which outlined proposals for legal regulation enforcing transparency across garment supply chains, setting out the framework for garment workers to be paid a living wage. The report highlights a significant step forward, recognising the lack of regulation in the garment industry, as well as recognising its potential to set an international benchmark. More recently, The Circle joined forces with 65 social and environmental NGOs last week to launch the Civil Society European Strategy for Sustainable Textile, Garments, Leather and Footwear. The promising strategy calls on the EU to respect human rights, create decent jobs and adhere to high environmental and responsible governance standards throughout its value chain in the EU and beyond.

Last, but most certainly not least, are the fast fashion brands themselves that are ultimately in charge of changing their business model in favour of a better system. And when it comes to this, Dana Thomas has a clear idea of what is required from the industry leaders. “The big step forward that must be made now is for brands to firstly, honour their commitments and #PayUp; secondly, pay workers a living wage from now on and lastly, lower their volume substantially – the planet simply cannot absorb all these clothes.”

If there’s one thing that the last week made clear, it is that the Covid-19 crisis might be the second chance we shouldn’t have needed. As the global pandemic forces the world to reconsider the way in which we are consuming and producing, it offers us a final chance to shake up the system. With shops closed and factories shut down, there has never been a more important time to continue our fight to change fast fashion. “The fashion business model as it was pre-confinement was unsustainable for planet and humanity,” Thomas summarises. “The industry needs to take this quiet time to re-evaluate its business practices and put in place a new system that is better for the Mother Earth and our fellow citizens. It is the right and just thing to do.”

See Aja Barber’s op-ed on fast fashion: but is it actually that cheap?

Find out how much carbon fashion month actually produces.