In June 2018 the Environmental Audit Committee launched its Sustainability of the Fashion Industry Inquiry. Today it published its findings in a landmark report – here’s our take on the recommendations.

Following the Sustainability of the Fashion Industry Inquiry, to which Eco-Age submitted and presented evidence, the Environmental Audit Committee (EAC) has published its landmark and incredibly significant report: ‘Fixing fashion: clothing consumption and sustainability’, calling on the Government to make fashion retailers take responsibility for the waste they create amongst other recommendations. “The way we make, use and throw away our clothes is unsustainable,” it concludes, having considered both the environmental and social cost of our clothes; textile waste and collection (the inquiry found that we buy more clothes per person in the UK than any other country in Europe); and new economic models for the fashion industry.

At Eco-Age we strongly believe that government and industry need to come together to improve the way that clothes are designed, made, retailed, used, and disposed of. As we know, the fashion industry causes significant environmental and social impacts that can only be mitigated through a more collaborative and responsible working model. Through advising government to make changes to policy, from business reporting to due diligence regulations and curriculum, we are hopeful that the fashion industry, both in the UK and abroad, can shift in a more positive direction. 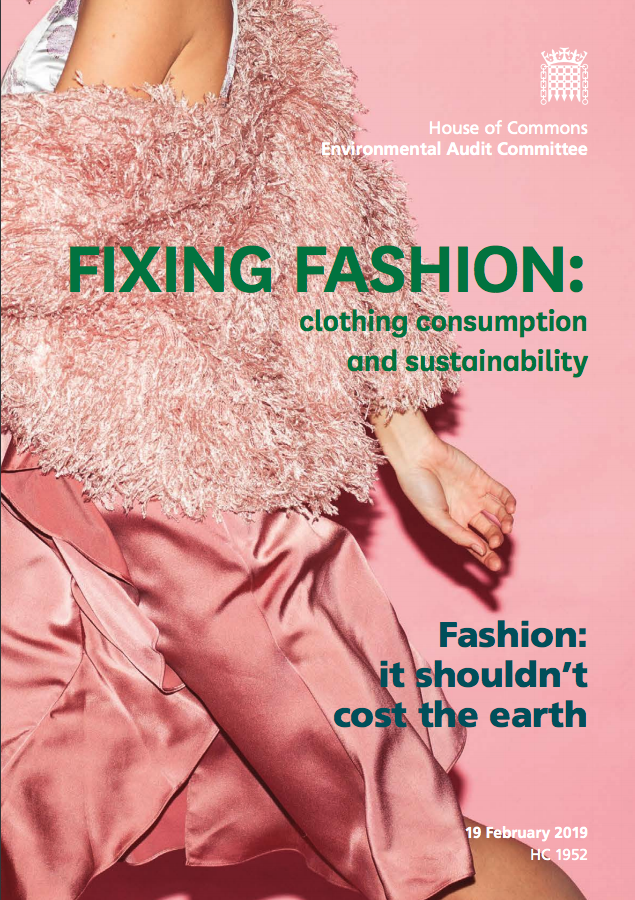 The EAC, led by Mary Creagh MP, has made a series of recommendations to Government including:

We were thrilled to see such important recommendations included in the report, including many of the recommendations we made ourselves – to increase government regulation on public reporting, to incentivise brands to do better, to improve recycling infrastructure, to increase school level education, and to work with brands and laundry companies to reduce the impacts of clothing care (including microfibres). However, we still believe that legally supporting a living wage as a human right is an absolute imperative to improving both the social and environmental performance of the fashion industry, and were disappointed not to see it included.

In the report, the EAC says it is concerned about the use of child labour, prison labour, forced labour and bonded labour in factories and the garment supply chain, stating that ‘fast fashions’ overproduction and overconsumption of clothing is based on the globalisation of indifference towards these manual workers.’

‘Our biggest retailers have ‘chased the cheap needle around the planet’, commissioning production in countries with low pay, little trade union representation and weak environmental protection,’ it reads. Its recommendations to Government include strengthening the Modern Slavery Act to require large companies to perform due diligence checks across their supply chains to ensure their materials and products are being produced without forced or child labour.

It also says that the Government must change the system to end the throwaway society, noting that often it is more expensive to repair an item than buy a new one, while many of us lack the skills to perform more than basic clothing repairs. As a result, around 300,000 tonnes of textile waste ends up in household residual waste every year, piling up in landfill or being burnt in incinerators. Less than 1% of material used to produce clothing is recycled into new clothing at the end of its life. The EAC concludes that the Government should make fashion retailers take responsibility for the waste they create and reward companies that take positive action to reduce waste.

Following the release of this report, the Government is required to respond within two months.

Fabrics of The Future
What Does Lyst's Year in Fashion 2019 Report Say About Sustainability?
Bonds of Gold
Why Social Media Campaigning Alone Is Not Enough