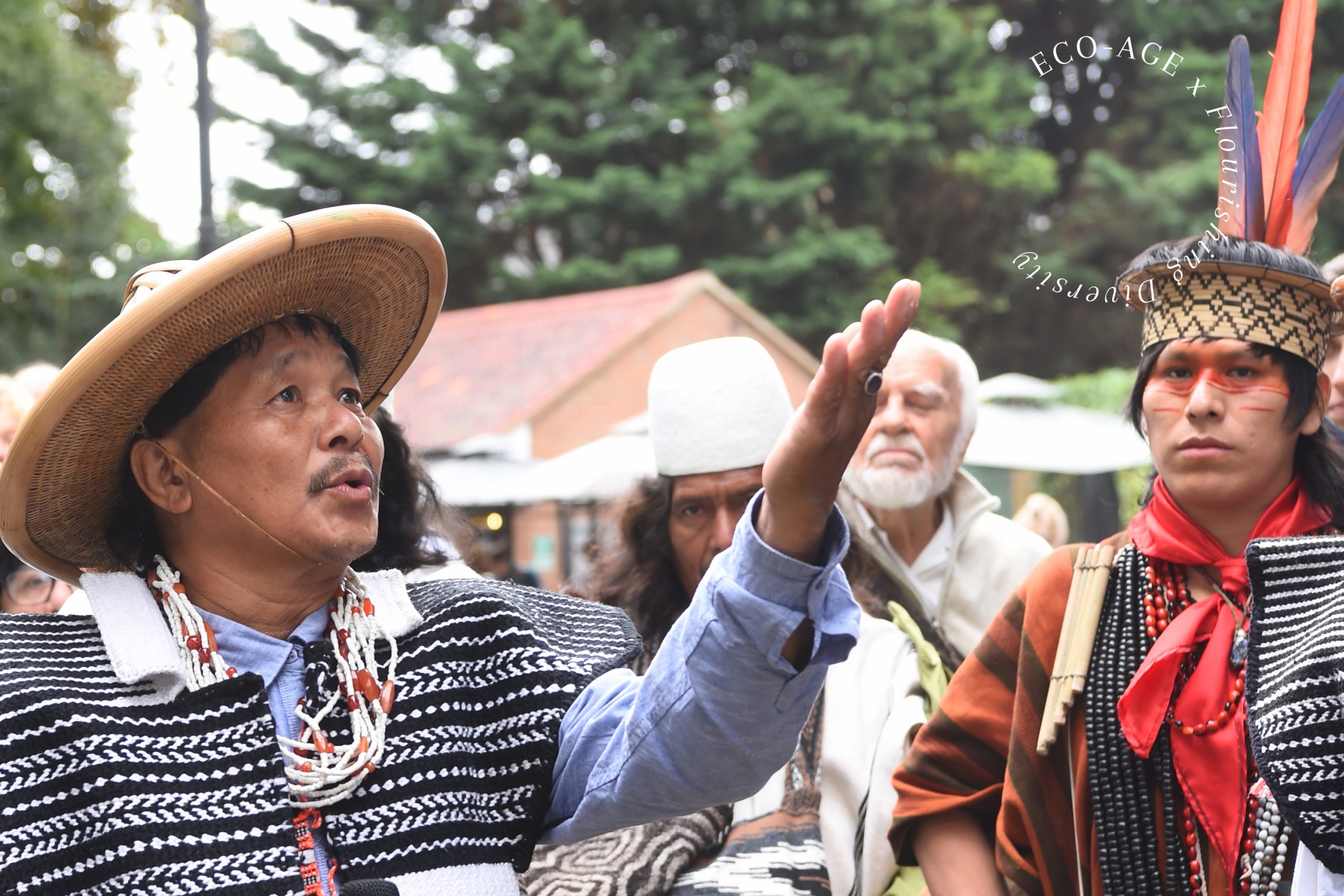 ‘The Struggle Belongs To All Of Us’: The Importance Of Listening To Indigenous Peoples And Building Allyship

What can Western societies learn from Indigenous cultures about mutually enhancing relationships between human beings and all other life? And how can a shift in perspective inspire diverse approaches to restoring planetary health, realigning our cultural practices in support of ecological harmony?

Eco-Age has teamed up with Flourishing Diversity, a network platforming value-led solutions to the many interlinking challenges facing humanity at this time, to launch a new series diving deep into this exploration. 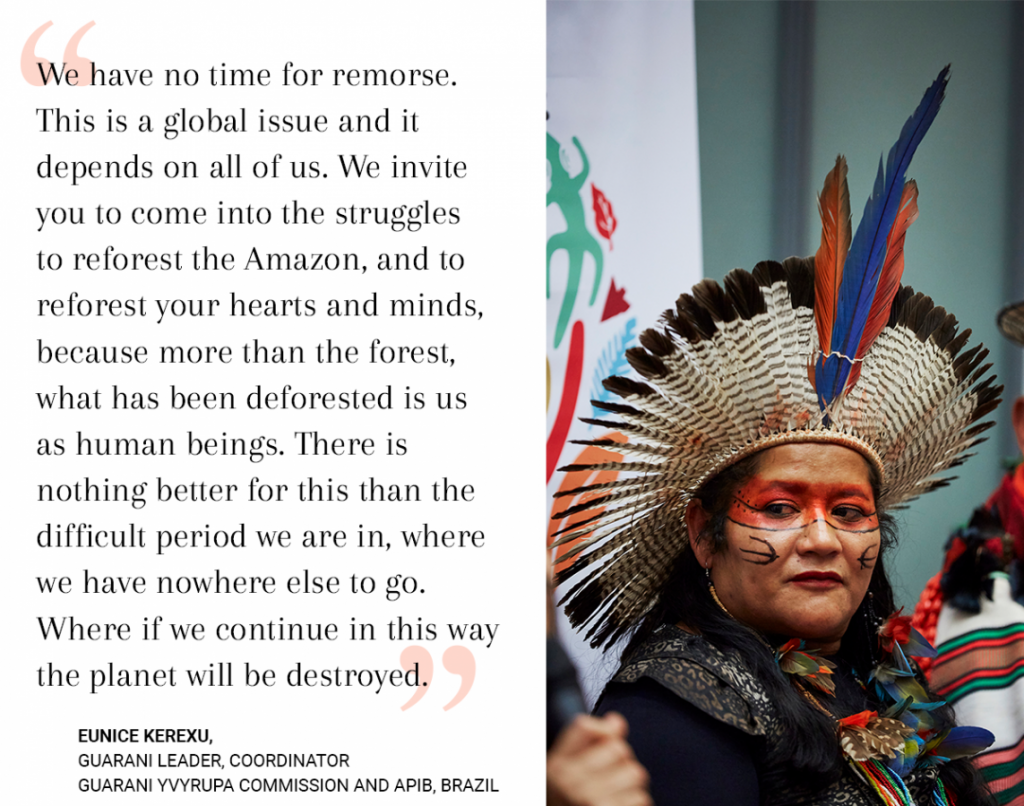 In September 2019 Eunice Kerexu, along with representatives from 17 other Indigenous communities from all four corners of the world, came to London for the Flourishing Diversity Series. The five day-schedule consisted of different events, each designed to celebrate and amplify Indigenous voices in front of western audiences.

As a listener at these events, Eco-Age creative director Livia Firth was moved and inspired by the stories and perspectives shared by Indigenous wisdom keepers. Their stories not only demonstrated the vital role Indigenous people play in resisting ecological collapse, but also illuminated the strategies embedded in their wisdom traditions for addressing contemporary environmental challenges. 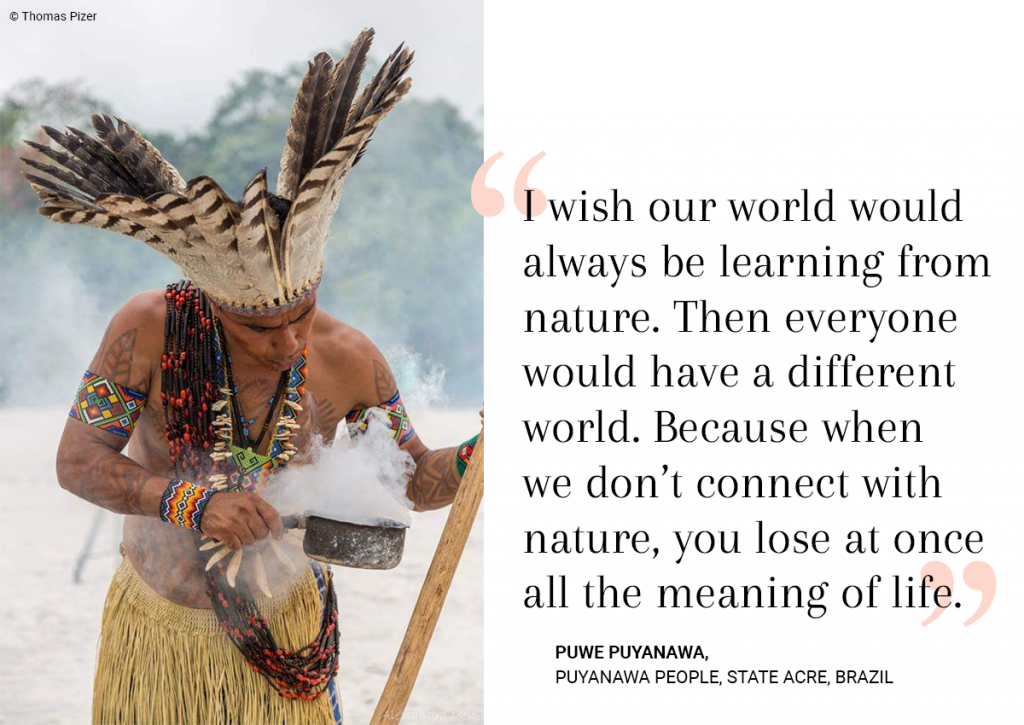 It is with this in mind that on the International day of the World’s Indigenous Peoples, Eco-Age has come together with Flourishing Diversity, whose mission is to drive the conceptual changes needed to inspire collective solutions that enable all species to flourish and thrive.

Over the coming months, we will be partnering on a series of articles exploring the link between Indigenous wisdom and the Western concept of sustainability. Together, we will explore in greater depth how Western practices can be informed and inspired by the wisdom contained within Indigenous cultures, including examples of where this is already happening. The partnership will see us dive into a range of themes and topics that invite reflection, cultivate understanding and spark consideration for how to re-orient ourselves towards a collective vision for a flourishing world.

The messages contained within Indigenous wisdom ask us to address our consumer lifestyle – a way of living that takes more than it needs and pollutes more than it restores – and to do this through the lens of our own humanity. When we look closely at the cause and effect, it is clear that solutions to the global challenges we face cannot be found within the same separatist ideology that created the problems. Instead, we’re being asked to look deeper within ourselves, at the perspectives that drive our human behaviours, as the foundation for enhancing rather than destroying the ecosystems we inhabit.

To do this is to simultaneously take an internal and an external world view; observing how we as individuals are part of and therefore impact the entirety of life. This enables us to take global action through a localised approach. By paying close attention to ourselves and the landscapes we inhabit, and nurturing them in accordance with the interconnectedness of life, we can have a far-reaching positive impact.

When we examine the many possibilities for responding to climate change, one significant thing we can do is to raise our voices in support of Indigenous Peoples and the territories they protect.

Lands under the guardianship of Indigenous Peoples flourish with life due to their ancestral wisdom and practices. This guardianship makes such land a prime target for businesses relying on the extraction of resources to accumulate wealth. In spite of land ownership rights that are recognised by international law, a great part of the 150 million Indigenous People and local communities living in more than 60 countries across the world are engaged in constant resistance against loggers, miners, oil companies, commercial poaching or fishing and monocultural farming practices,  that operate on a basis of maximum production for minimum effort, resulting in extreme injustices on an environmental, social and cultural level. The externalities these create will be borne by generations to come.

Becoming an on-going ally of Indigenous Peoples by supporting them in their struggles to maintain their lands and practices as custodians of biodiversity, is one of the key actions westerners can take as part of a collective movement to restore ecological balance.

There are many Indigenous and local communities across the world doing vital work who are open to strengthening alliances with those ready to listen, learn and collaborate in ways most helpful to their needs. Here are just a few gateways to learn more and find on-going ways to support; there are many more out there.

By recognising our ability as humans to be custodians of the environments we inhabit and to directly enhance them, we can use our vast creativity to envision and enact ways of living that support all species to flourish and thrive in their own way.

Join us next month for an interview with Jessica Sweidan – co-creator of Flourishing Diversity and Founder of Synchronicity Earth – unpacking why ecosystems and biodiversity lie at the heart of sustainability and addressing climate change, and exploring the synergy between culture and biodiversity.

“We are the Earth”: Discover how cooperation with Indigenous communities can change the world.

Follow Zazi Vintage founder Jeanne de Kroon on a journey to Brazil to explore the Huni Kuin’s relationship with cotton.