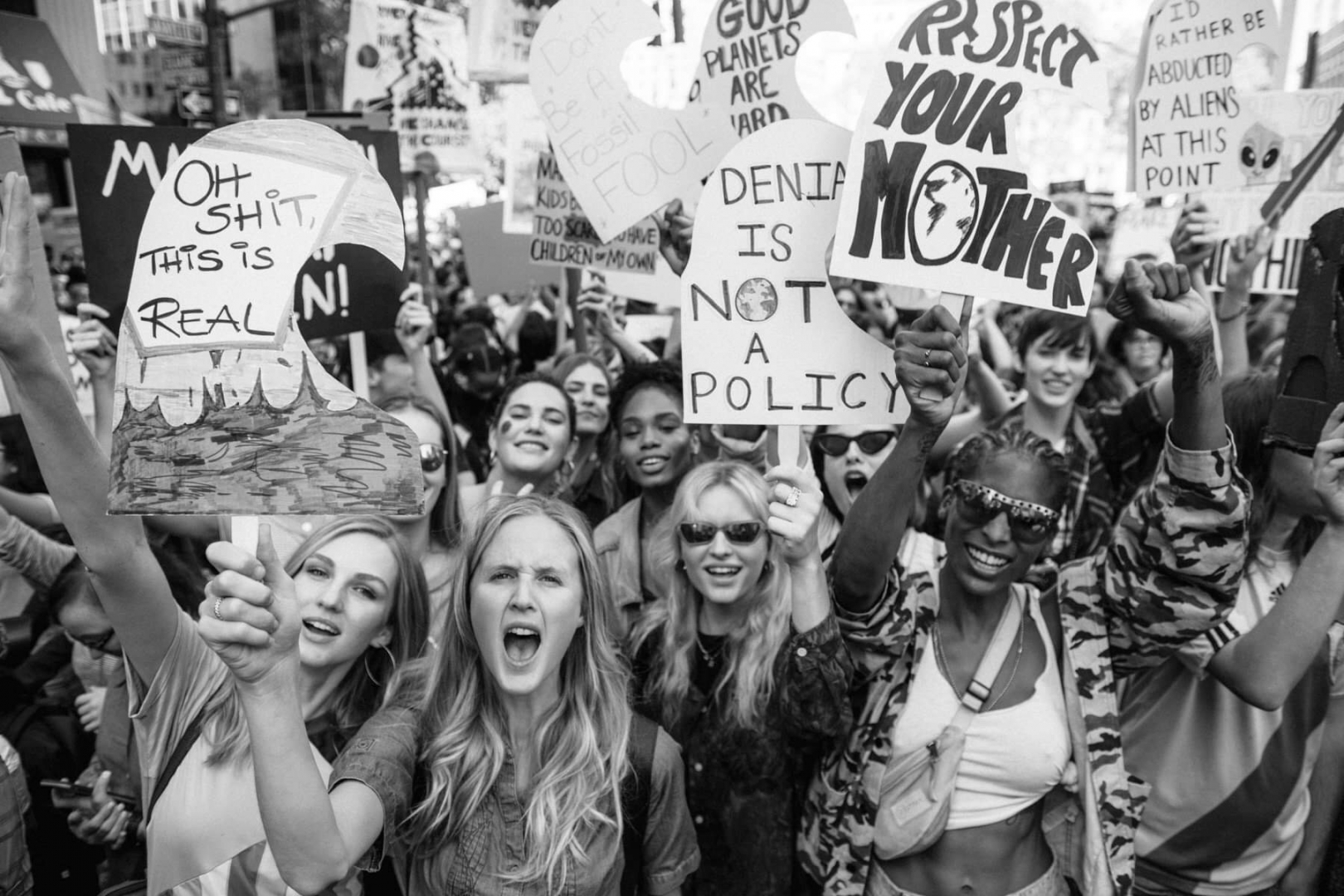 From The Frontline Of The Global Climate Strikes

On Friday, September 20th, millions of people in an estimated 185 countries took part in a Global Climate Strike. Today, on the last day of the Global Week of Climate Action, protesters are taking to the streets again to make their voices heard.

Last Friday, what’s thought to be the biggest protest ever took place across the world. People of all ages from 185 countries around the world joined student’s and took part in a global climate strike, the first of its kind.

The people’s movement #FridaysForFuture was started almost a year ago by Greta Thunberg, now 16 years-old, among other inspiring school students. What began as a relatively smallscale protest has inspired millions to join the action in calling for governmental action to be taken on the issue of climate change. In recent months, the movement has gained incredible momentum woth Greta’s emotive and impassioned speech at the UN Climate Action Summit earlier this week making front pages everywhere.

As the Global Week of Climate Action culminates today, people of all ages are again taking to the streets to protest. We spoke to a few familiar faces in attendance to find out more about why they are taking part, and what they hope will come from the action. 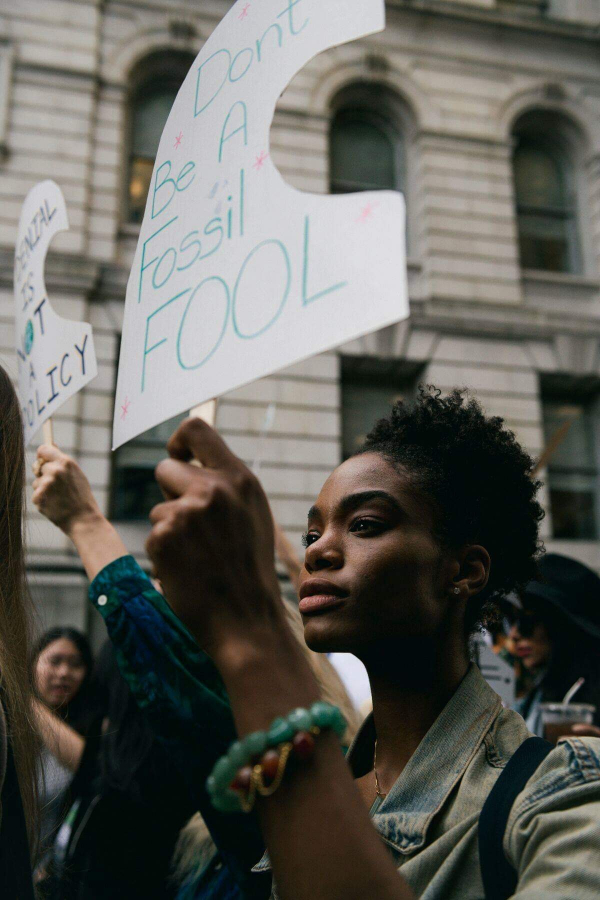 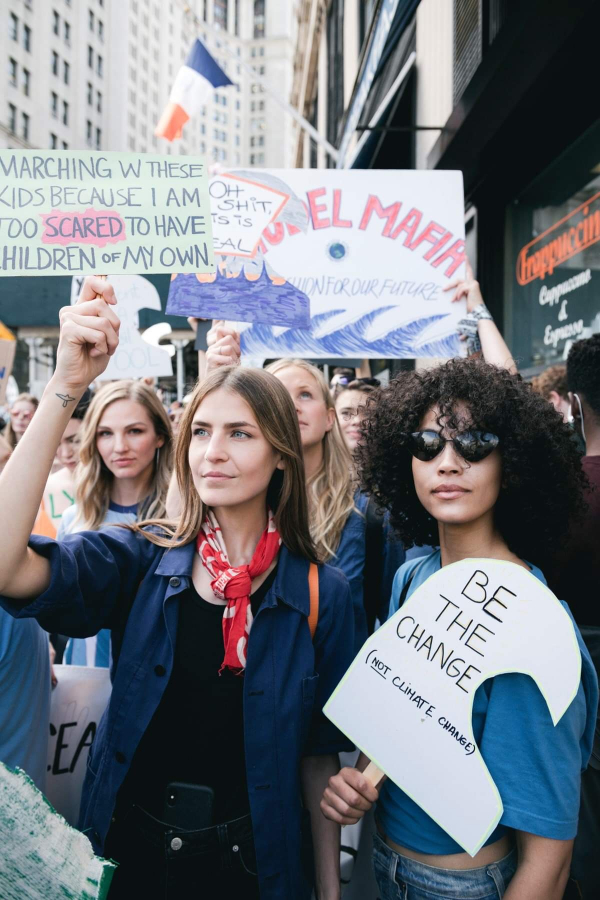 Through Model Mafia, groups of model activists joined the strikes in cities across the world including New York, London, Dublin and Milan. As well as coordinating a social media strike, in partnership with The Slow factory, the group arranged rallies during fashion week, took part in panels and held sign-making sessions. Members of the Model Mafia community spoke at workshops and teach-ins about how climate change is impacting their homelands.

“I am participating in the climate strike because the clarity of youth activists, the power of their wisdom and energy, has pushed the climate movement further in the last few months then I thought was possible,” says Cameron Russell. “Their leadership has fueled my hope and I want to thank them, to listen to them, and to follow them on Friday, and every day. The strike is also a reminder to me – I acknowledge the privilege I have to skip work with ease and remember that I can and should be taking more and bigger risks everyday to push for a just and sustainable future.”

Veronica Pome’e says: “As a Pacifica woman I feel connected to this cause because two-thirds of the ocean are in the pacific which means the Pacifica islands are at the forefront of climate change. 10 centuries of my ancestral history will be wiped out due to rising sea levels caused by climate change.” 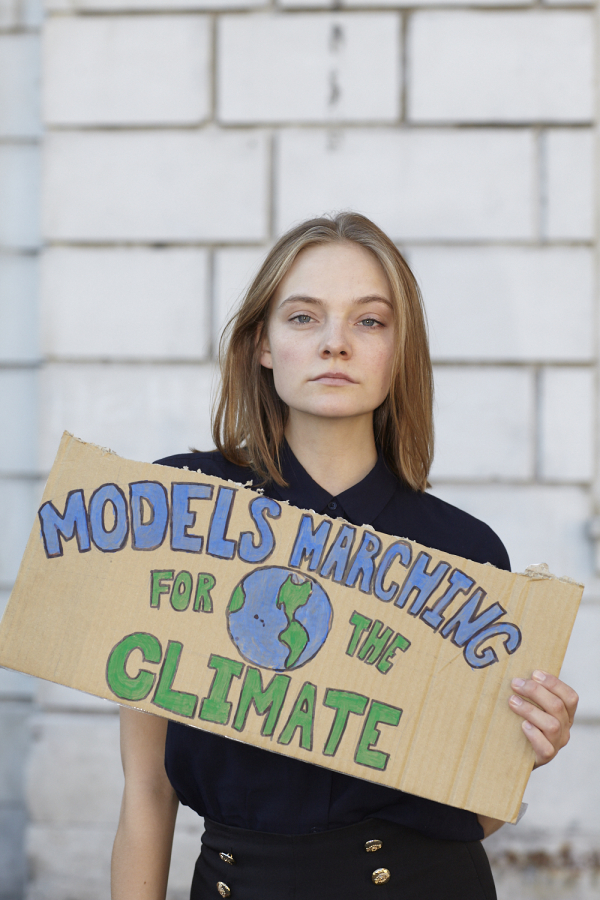 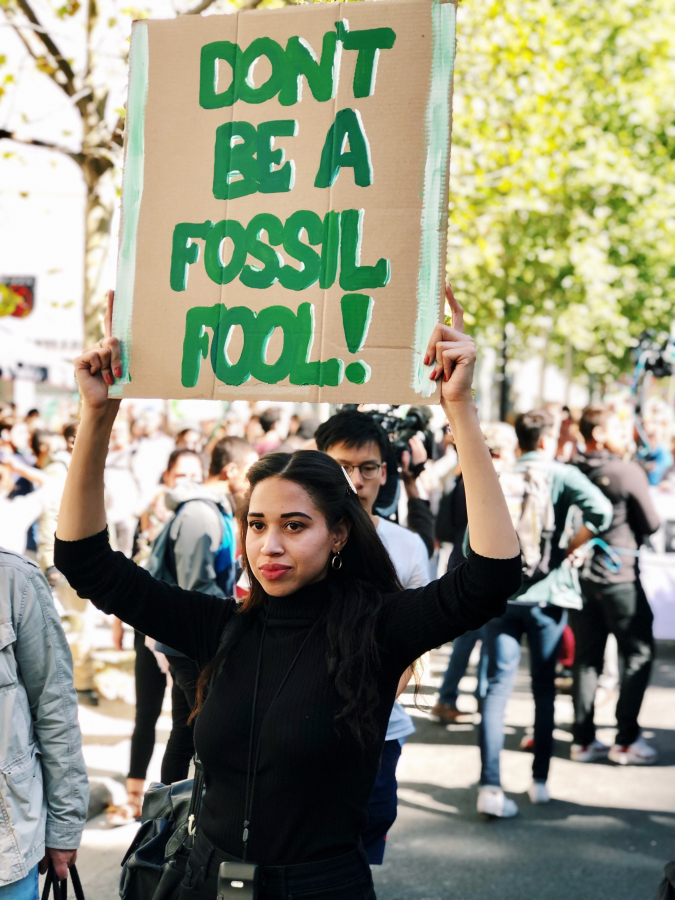 “I was born in Somalia, and I came to America as a refugee escaping from war and turmoil. I understand how climate change is causing and will continue to cause more turmoil. We’re already in crisis mode: according to UNHCR, the UN refugee agency, the number of displaced people is now at its highest ever, even more than after World War II. And in the next 20 to 30 years, there’s no question that tens of millions of people will be displaced by drought and other effects from climate change. The term ‘climate refugee’ isn’t officially accepted yet, but soon it will be unavoidable,” says Hawa Hassan.

“Somalia, my birthplace, is currently experiencing yet another drought, the second in only six years. We’ve had so much war and so much famine – for all that we hear about extremist threats, the cruel reality is that people are now being devastated by man-made, weather-related calamities. Yes, it’s very personal to me. “

Eco-Age contributor Jil Carrara and her grandmother joined 50,000 protesters on the streets. “Fires, heatwaves, droughts, floods, mass extinctions and more natural disaster are what our future looks like because of climate change,” she says. “This is why today I joined 30,000 protesters in Hamburg, Germany and millions worldwide to demand immediate action from governments worldwide ahead of the UN Climate Action Summit.” 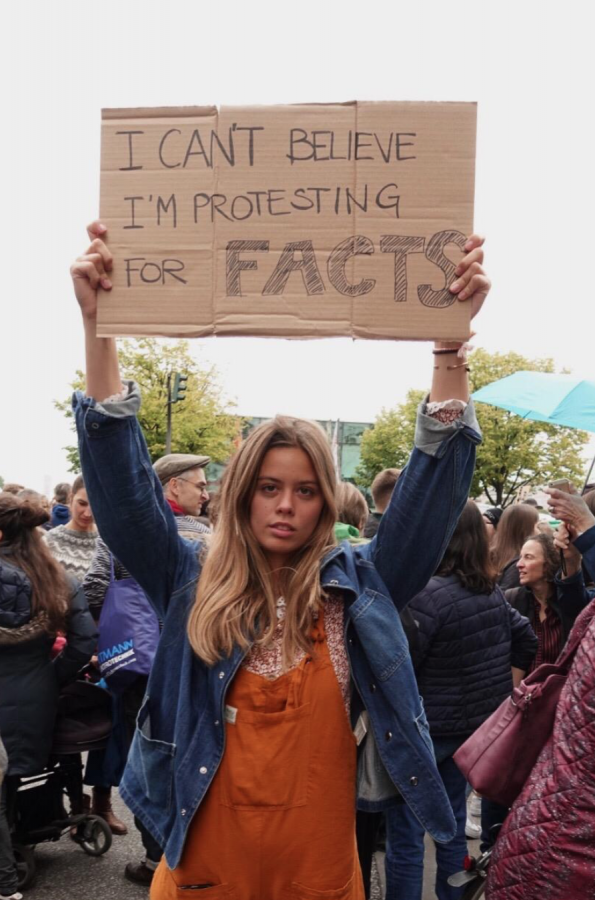 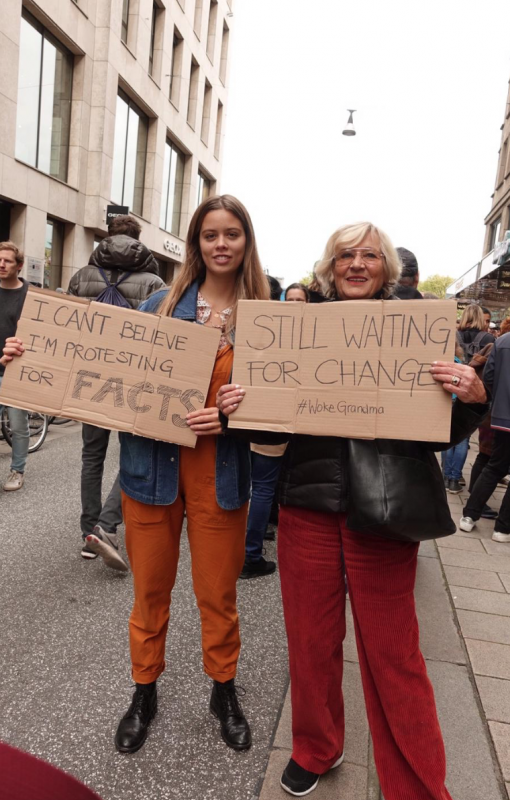 “Those who will be most affected by the climate crisis do not yet have the right to vote, so we owe it to them (and ourselves) to speak out and fight for a better future,” says Jil. “We want world leaders to feel the pressure, know we are watching them and that they will be held accountable for their actions. The wonderful thing about these events is that you leave with a heart filled of hope and the belief that together we can change the world  – in unity there’s strength… here’s hoping!” And here’s hoping that Jil’s new hashtag #WokeGrandma starts trending soon too…

Medical student and Eco-Age contributor Mikaela Loach attended a climate march. The route took protestors from the Meadows down the iconic Royal Mile to the Scottish Parliament. The University of Edinburgh supported students and staff choosing to strike, assuring them that no one would be panlised for striking. 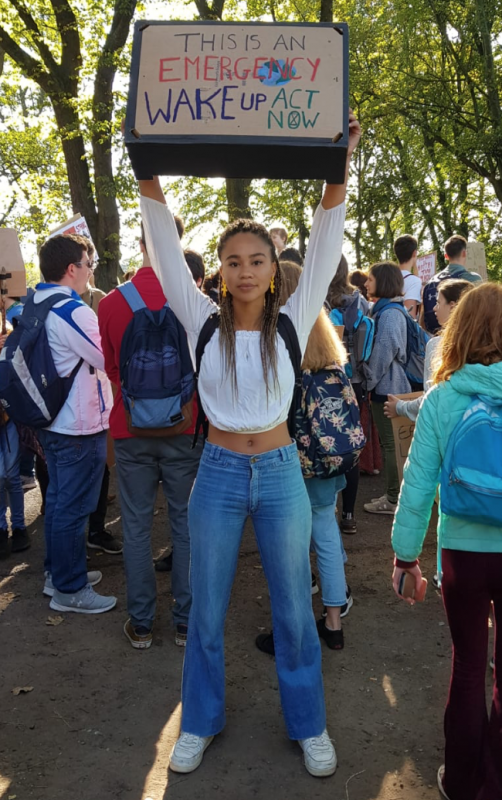 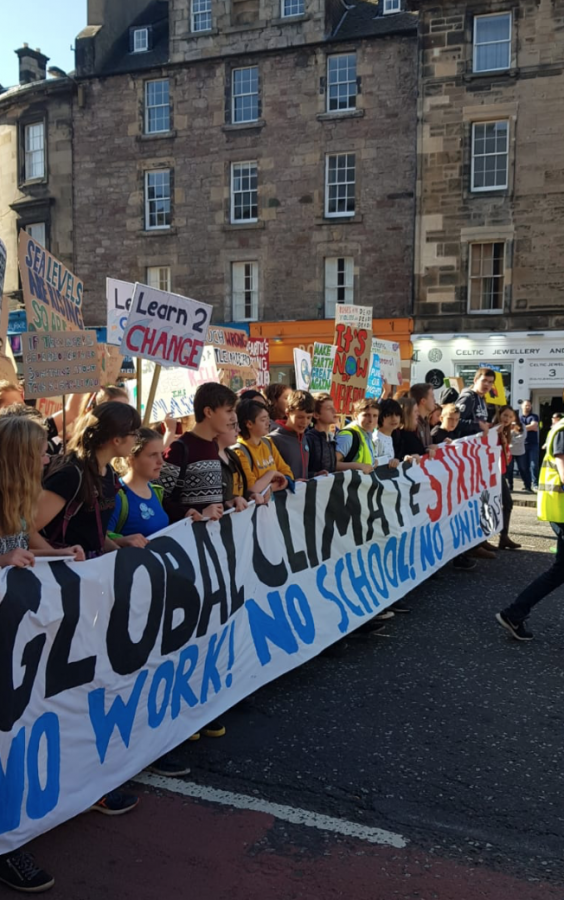 While it’s still to be seen how governments and organisations will respond in the longer term to the action that has taken place in the passed week, the action that has taken place has sparked a fire in many that won’t be going out anytime soon. What’s most necessary is that our global community continues to work together in the coming months; to keep the climate conversation at the forefront of political conversations; to keep putting pressure on the institutions, organisations and big businesses that have the power to implement widespread change in order to protect the future of our planet.

So, what next? As the Global Week of Climate Action comes to an end, the movement isn’t slowing down. As Greta sails back across the Atlantic to continue her work closer to home, #FridaysForFuture will certainly continue and hopefully continue to gain support from adults and students alike.

And on October 7th Extinction Rebellion are kickstarting two weeks of international action. Causing peaceful and non-violent disruption, the group will be organising activity across major international cities to again call attention to the lack of governmental action on climate change. A local group will be shutting down roads in Central London, for instance. Find out how to get involved.

Read our interview with documentary photographer Alice Aedy and take a look at her visual account of the climate strike.

There’s no one route to activism – read Mikaela Loach’s personal reflection on her journey from slacktivism to activism.

A Year of Wildfires: Why Fires Are Spreading Across the Globe
Thrift Shopping Is A Political Choice. Here’s Why.
Why Female Empowerment and Conservation Are Inextricably Linked
Wardrobe Crisis Podcast: Clare Press Meets Rosario Dawson and Abrima Erwiah