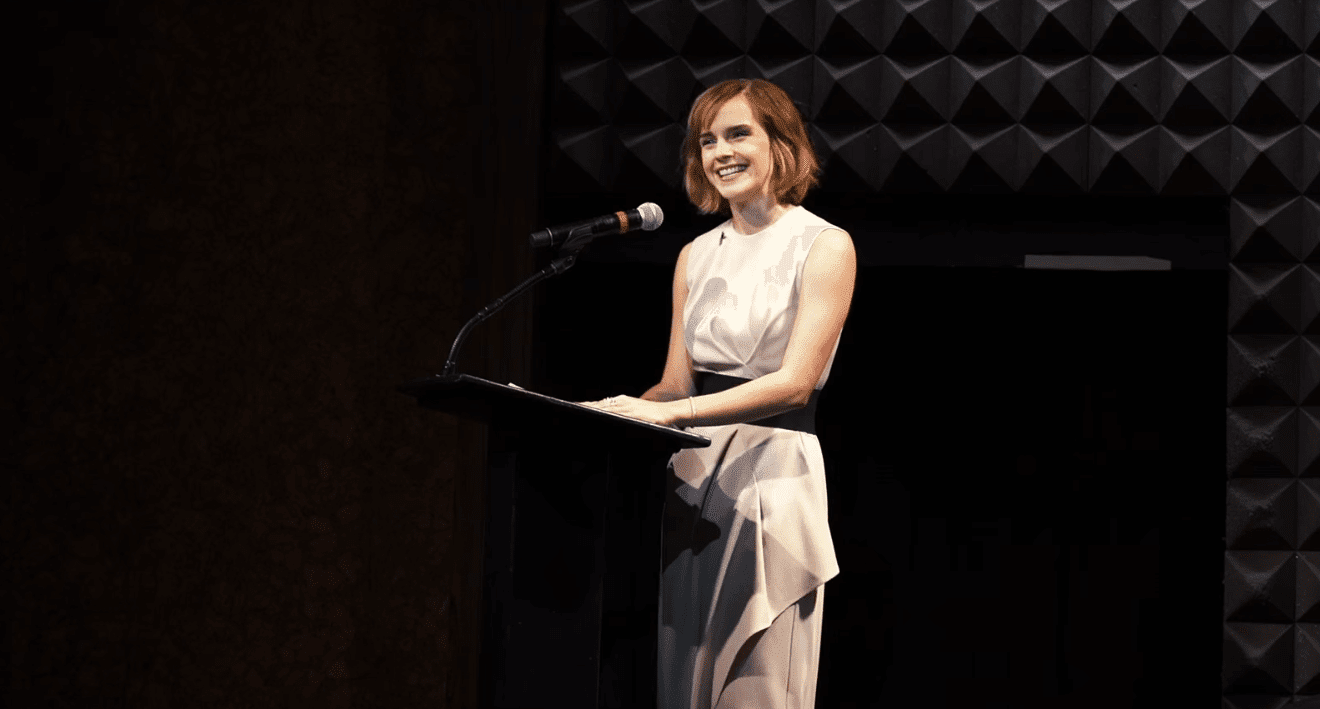 If you had the chance, would you change the world? The aswer is usually yes, and the thought is usually accompanied by the expectation of a magic wand – how else would it be possible? In truth, no matter our disposition, we all have the power to drive change, even through seemingly small actions. Be it taking the bike to work, buying from a ‘better’ brand or a simple spoken word that inspired others. Notably powerful speeches can often be a direct trigger to action, catalyzing change. Here’ s a collection of the 10 most inspiring speeches to prove that every deed matters to make a bigger impact.

Emma Watson at the HeForShe Campaign 2014

Emma Watson’s rousing speech announcing her UN Campaign HeForShe went viral after calling for gender equality by specifically addressing men to speak up and fight for equality of women.

“We don’t often talk about men being imprisoned by gender stereotypes but I can see that that they are and that when they are free, things will change for women as a natural consequence.”

After traveling around the world documenting the effects of climate change for two years for his documentary ‘Before The Flood’, Leonardo DiCaprio delivers a heartfelt speech calling everyone to action as a matter of survival.

Before becoming The Duchess of Sussex, Meghan Markle was already an avid women’s rights campaigner in her role as UN Women advocate. In 2015 she spoke about her own experiences with gender inequality and what she did to fight it already at age 11.

“Women need a seat at the table, they need an invitation to be seated there and in some cases, where this isn’t available, well then they need to create their own table”

American media mogul and philantropist Oprah Winfrey has always been an advocate for women’s right. During her 2018 Golden Globes acceptance speech, during the peak of the ‘Me Too’ Movement, Oprah spoke about her own experiences with domestic and sexual abuse and finished by a call to action and a message of hope that times will indeed change.

“So I want all the girls watching here and now to know that a new day is on the horizon! And when that new day finally dawns, it will be because of a lot of magnificent women, many of whom are right here in this room tonight, and some pretty phenomenal men, fighting hard to make sure that they become the leaders who take us to the time when nobody ever has to say, ‘Me too’ again.”

The first black first lady, Michelle Obama, gave a fifteen minute passionate speech to the Democratic National Convention that was the perfect to juxstaposition to Trump’s campaigning: kind, graceful and emottional.

“With every word we utter, with every action we take, we know our kids are watching us. We as parents are the most important role-model.”

While accepting NTA’s ‘Impact’ award, Sir David Attenborough, gave a heartfelt speech about having to protect our planet and assuring the audience that it’s not too late to start acting.

Designing for Disability by Sinéad Burke at #BoFVOICES 2017

Disabled people have long been ignored by the fashion industry – a reality that activist Sinéad Burke has been questioning for years. During her BoF Voices Speech she talks about why design should be inclusive of everyone and the economical value that lies within this.

“You think you know what disabled people need or want, instead of asking us. What I wish for you to do is to make yourself slightly vulnerable and learn from theorists […] about power sharing. Bring us to the table. Ask us for our greatest insights because we live this experience, every single day.”

Reflecting on some of the most pivotal points in his life, Steve Jobs, former CEO and co-founder of Apple Computer and of Pixar Animation Studios, urged graduates to pursue their dreams and see the opportunities in life’s setbacks, including death itself, at Stanford’s 2005 Commencement Speech

“…the only way to be truly satisfied is to do what you believe is great work. And the only way to do great work is to love what you do. If you haven’t found it yet, keep looking. Don’t settle. As with all matters of the heart, you’ll know when you find it.”

After surviving a Taliban attack that threatened her life because she publicly demanded girls be allowed to receive education in Pakistan, Malala has never stopped advocating for female education. In 2014 she received the Nobel Price for Peace, as the youngest person in history, for her efforts to equalize education.

“It is not time to tell the world leaders to realise how important education is – they already know it. Their own children are in good schools. Now it is time to call them to take action for the rest of the world’s children. So it becomes the last time that we see a child deprived of education.”