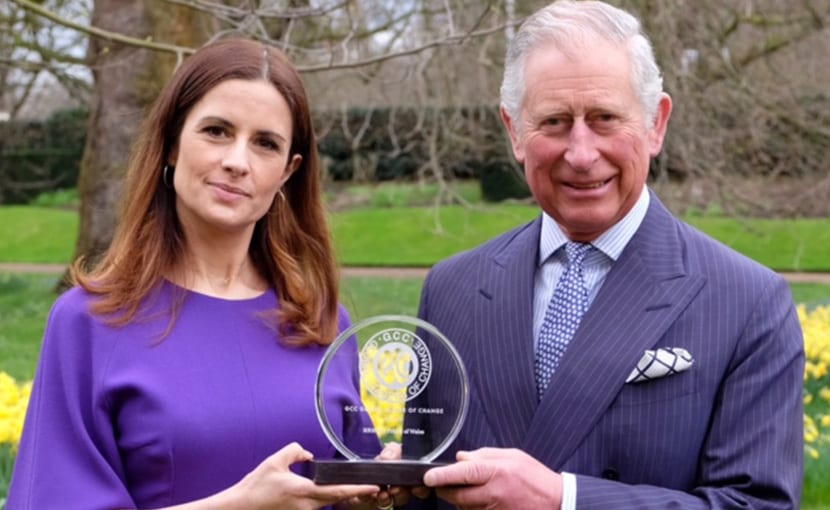 His Royal Highness The Prince of Wales is the recipient of The GCC Global Leader of Change Award, 2017, for his outstanding contribution to global environmental preservation and protection and for his passionate vision for a better future for humanity.

The inaugural GCC Global Leaders of Change Awards, established in 2015, recognised transformational business leadership in ethical and sustainable development, during the UN Climate Change Conference (COP21) in Paris in December 2015.

Eco-Age recognised His Royal Highness The Prince of Wales’ leadership, both nationally and globally and his compassion for people and planet. Among the principal achievements Eco-Age highlighted were:

– The establishment of ‘The Prince of Wales’s Charitable Foundation’ in 1979 and ‘The Prince’s Trust’, the UK’s largest youth charity, offering a beacon of hope and practical help to those disadvantaged and often forgotten in our societies.

– Changing the narrative internationally on the defining issues of our day such as rainforest preservation and protection, bio-diversity and wildlife preservation, stressing the importance of natural capital.

– The founding of ‘Business in the Community’, a group of not-for-profit organisations of which he is President, pushing the agenda on areas such as responsible business and enterprise, global sustainability and rural affairs.

– The launch of ‘The Campaign for Wool’ in 2010, to educate consumers on the benefits of wool internationally and help to support and grow the wool industry, in partnership with the world’s largest wool organisations and producers. His Royal Highness The Prince of Wales innate understanding that wool is completely natural, sustainable and recyclable, had until his intervention been mostly forgotten.

Livia Firth, Founder and Creative Director of Eco-Age, said: “I am delighted we had an opportunity to recognise a statesman who has truly made a difference to many people’s lives through his work and given us insights to not just the issues, but solutions that can add value to people and planet.  His establishment of the Prince’s Trust alone is formidable and I have huge respect for someone who is the highest example of what at Eco-Age we call an active citizen”.