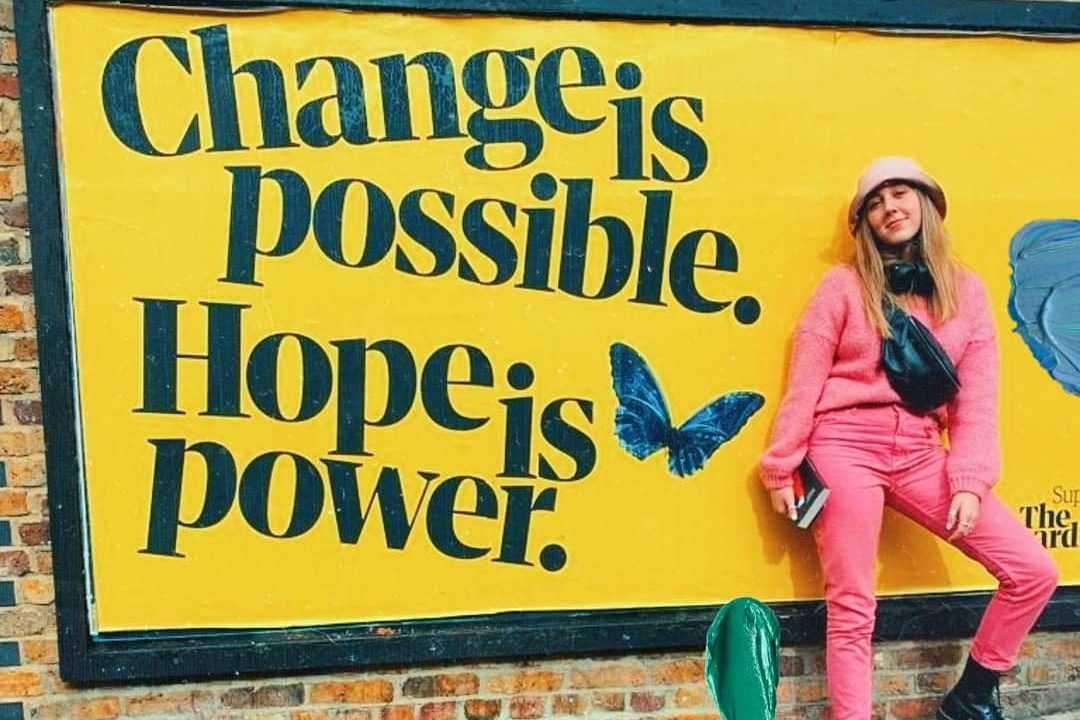 Gina Martin: How to Get Your Voice Heard in 2020

Having used her voice to campaign to make upskirting illegal, political acitivist and author of Be The Change, Gina Martin is no stranger to making herself heard. She shares her tips on how to make 2020 the year of change.

2020 is set to be a big year, and I don’t mean big as in ‘time to hit those new personal goals’ I mean, bigger than all of us. Scientists projected that to keep the rise in global temperatures below 1.5C this century and stop cataclysmic societal collapse we had to cut global emissions by 45%, but now academics are challenging if this is actually far too optimistic. Hans Joachim Schellnhuber, founder and now director emeritus of the Potsdam Climate Institute has announced that the next 18 months “will decide our ability to keep climate change to survivable levels and to restore nature to the equilibrium we need for our survival”. The recent general election resulted in a Tory majority that, whatever your politics, point very strongly to privatisation of the NHS and therefore collapse of support for the most vulnerable in our country. And that’s just the tip of the melting, Tory iceberg. There are a million things to fight for.

But the most important thing to remember? Shouting at people for using plastic straws and sulking because your party didn’t win the election is moot. We’re way past the point of small changes to beat climate breakdown and relying on other people to do things for us. 2020 is about using our privilege and taking action. It’s about people power, and it’s about ignoring the assumption that ‘regular’ people like us aren’t the right people to enact change. We are. It’s the biggest scam in the world that the people holding the evidence those who see society’s challenges and live with them every day, feel like they have no power to change things. I’m calling bullshit on that.

However, I used to feel the same. I used to believe I had no real stake in where my society was going. But then, in 2017 while I was at a festival in London’s Hyde Park, a group of guys stuck their hands between my legs, took photos of my crotch and shared them around to ‘teach me a lesson’ for rebuffing their advances. After snatching the phone and handing it – along with the guy – into the police, I found out that non-consensual upskirt images weren’t a sexual offence. I also found out that it was happening to kids and they couldn’t always prosecute, so I launched a media awareness campaign, partnered with a my lawyer Ryan Whelan and lobbied the government for 18 months, and the new gender-neutral, progressive legislation led by Ryan and I was introduced in February. I changed the law with no political or cademic experience, just a lot of anger, a laptop, my own time and a great lawyer. If I – a person who has lost 23 debit cards in her life – can do that. You can get your voice heard and make moves, too. So, here’s some tips for getting your voice heard in 2020. 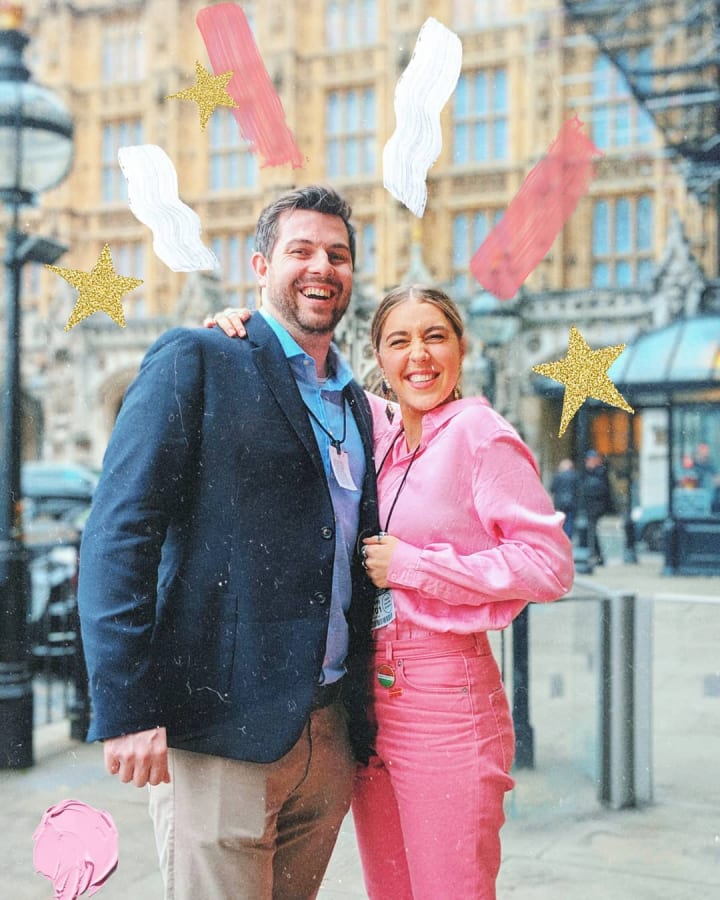 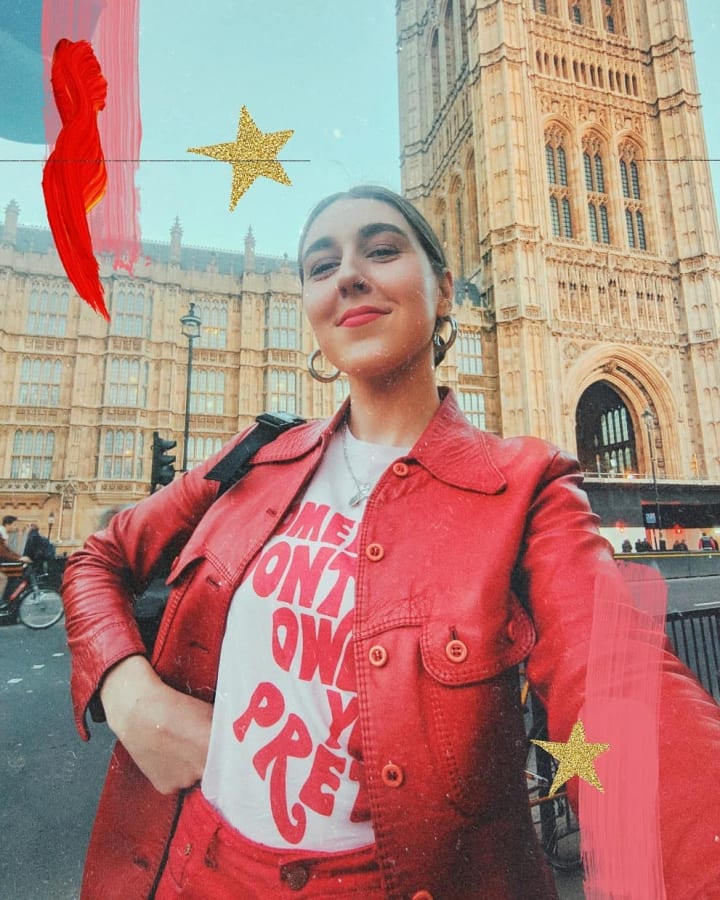 Identify What’s Yours to Shout About

Now more than ever, we’re seeing people talking about issues that they’re not best placed to speak on. It’s important to remember not every issue is yours to change. Partly because we need more diverse and intersectional activism, but also because if want real, meaningful and systemic change it need to come from those who know the issue best. It’s also important to remember that campaigning, volunteering or activism is hard bloody work, and if you want to succeed in it you have choose something that comes from your belly – something that is part of you. Something you care about so much that when things get hard, exhausting or you hit blocks, you won’t consider giving up on. If you’re looking around picking something to change for the act of doing it not the passion, chances are you’ll run out of steam pretty quickly.

Use Your Skills, Then Plug Your Gaps

Sit down and write down the things you’re really good at. It could be art, speaking, working with kids, delegating, writing, strategy – anything. Knowing what you want to shout about or change is one thing, but knowing what the delivery system is another, and it’s just as important. It’s so so critical to use the strengths that are unique to you to achieve the change you want. Why? Because a) people respond to authenticity and b) utilising something you’re good at already gives you way more chance of succeeding. When I launched the upskirting campaign I knew I was good at digital marketing, media, getting people emotionally engaged and public speaking. Was I knowledgable about legal technicality and political procedure? No. I was completely useless at it. So, I found someone who was and we worked together as a tight team. Knowing your strengths and your shortcomings, being honest about it, and working accordingly is a huge advantage then it comes to using your voice for good. 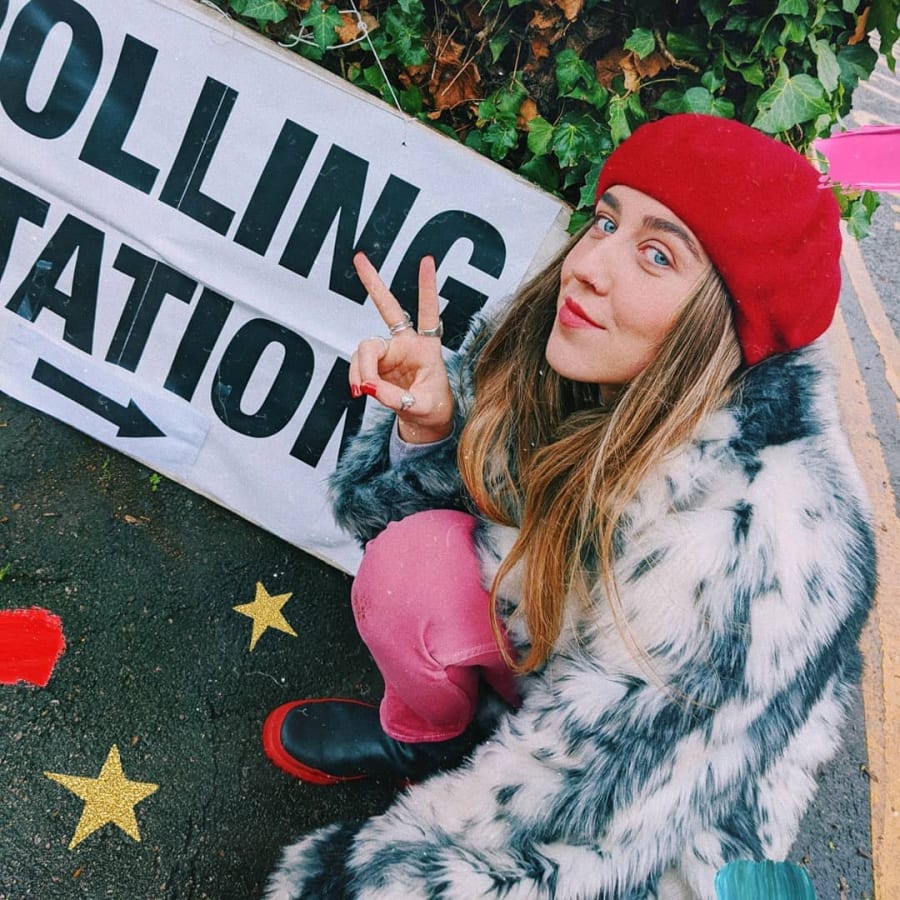 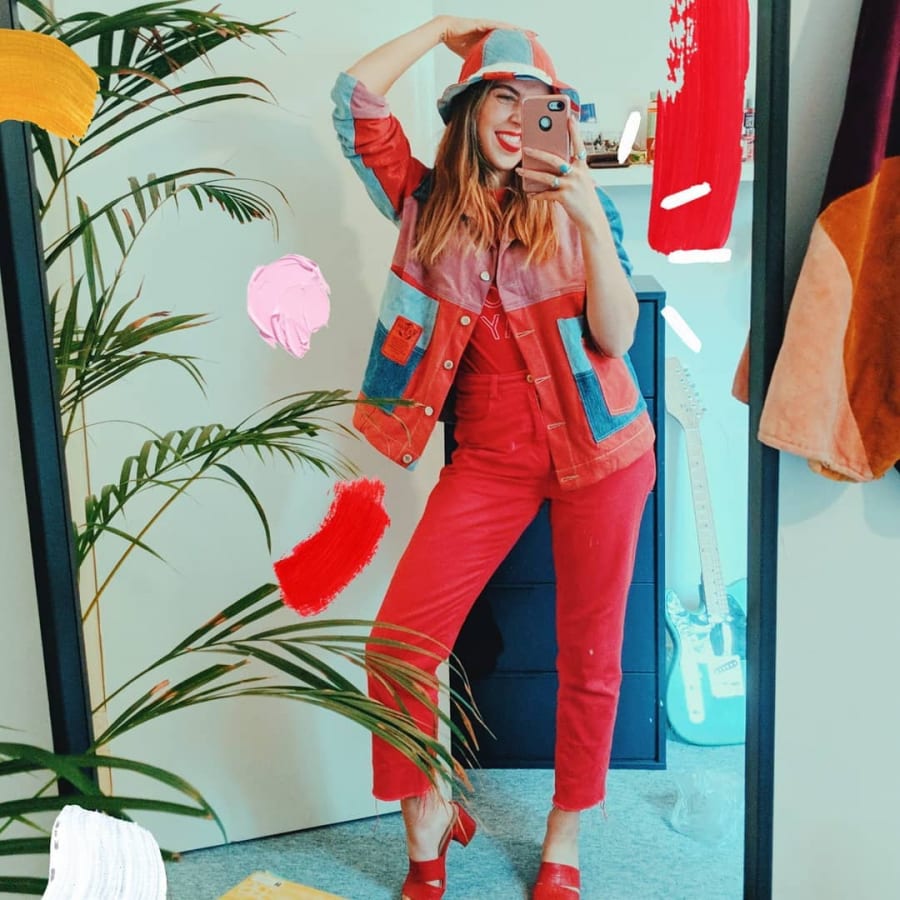 Activism and campaigning can always, however you do it, be chalked up to one thing. Persisting until you have worn someone or something down and created a change. The difference between people who have ‘success’ (I hate that word, I prefer ‘progress’) at it and those that don’t is one thing: you just don’t stop. Raising your voice and pushing for something will always mean facing up to barriers because what you’re doing is going against the status quo. Be prepared for different eventualities and refuse to stop.

If you’re running anything other than an awareness campaign you’ll need to transcend social media. Social is a game changing tool – you can get information to more people quicker than ever before, target sympathetic people to help you with your cause and gain access to journalists, press, educators, gatekeepers of industries and more online, but you also need to realise that if you’re trying to improve peoples lives you need to be working with people. It’s as simple as that. Activism, campaigning, pushing for change – whatever you want to call it, it’s about community and solidarity, and so if you’re doing great work online but are disconnected from people IRL you’re going to struggle. Get in the room with people. Don’t see social media as a replacement for old campaigning, see it as a new tool to bolster and be a catalyst to traditional campaigning. 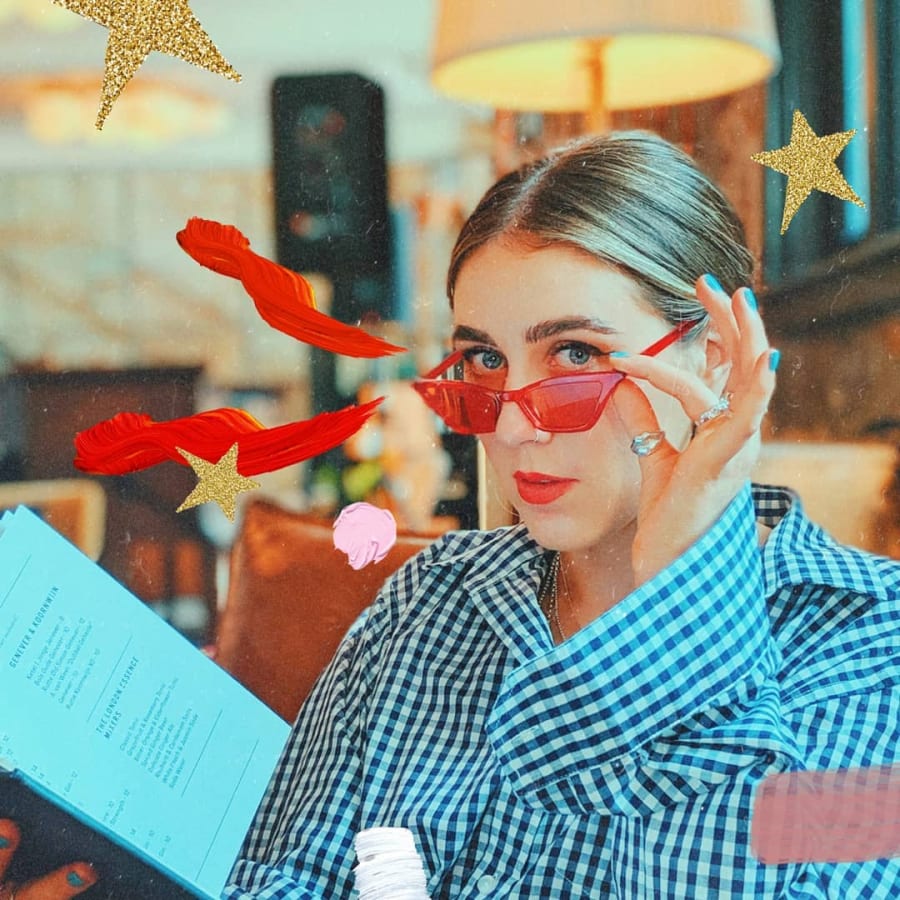 When it comes down to it, it’s all about taking what you already have and exploiting it for change. You don’t have to be a remarkable person to make change – you become remarkable in the process. Ordinary people can do extraordinary things; we’ve seen it time and time again, and the more diverse the set of people forcing change the more nuanced and effective the solutions. Imagine a venn diagram; the first circle says “your passion” in it. Now draw the second circle and name it “exploiting your skills”. See where the cross over point is? That’s where you’re called into action. Now go and do the thing. Send the email. Buy and read the books. Have the uncomfortable conversations. Ask for more. Call out the bullshit. Make 2020 the year you’re more active than ever. Use your voice.

As we enter a new decade, read how best you can be a climate activist and act upon the UN Sustainable Development Goals to action the necessary change.

Learn about how you can help with the refugee crisis in Calais.

Fashionscapes: Artisans Guatemaya
Life As I Know It: Amber Valletta
How To Begin Making Your Own Clothes, with Help from Made My Wardrobe
Creating Plastic-Free Party Dressing with Bio Iridescent Sequin