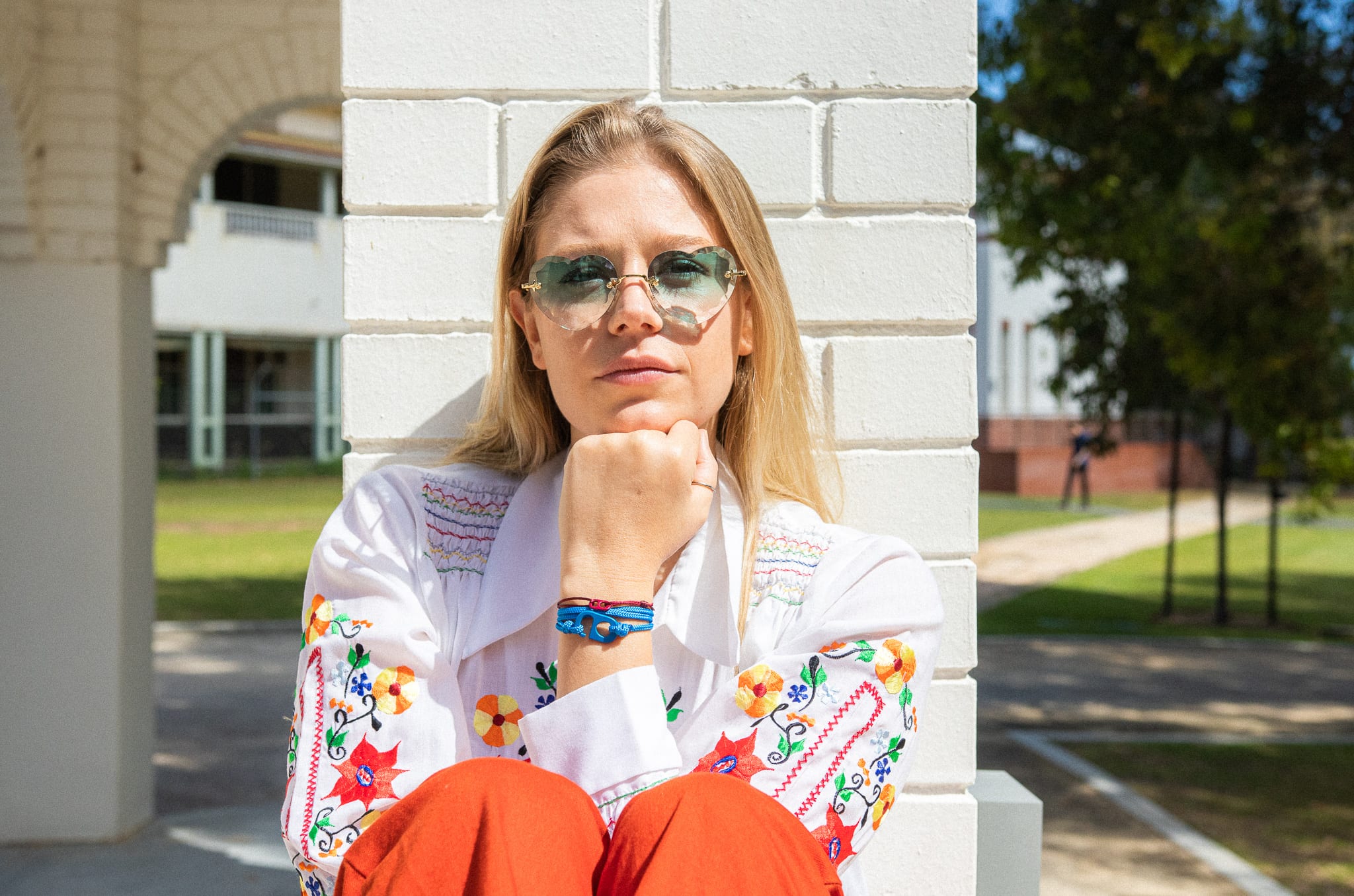 Grace Forrest On Modern Slavery And The Fashion Supply Chain

Julia O’Driscoll speaks to Grace Forrest, co-founder of the Walk Free Foundation and UN Goodwill Ambassador, to find out how Covid-19 has impacted workers throughout the fashion supply chain, and how the Black Lives Matter movement has brought slavery to the fore of global conversations.

For readers who may not be aware of the scale of modern slavery, particularly in the fashion supply chain, could you provide an idea of the current global picture.

For many people, modern slavery is literally as close as the shirt on their back. That is how pervasive it is in global fashion supply chains. The reality is there are more people living in slavery today than at any other time in human history.

One out of every 200 people on earth is living in slavery. It exists in every country and it touches our lives through the global economy every day. Modern slavery in an umbrella term to describe a number of highly exploitative practices which include forced labour, forced marriage, debt bondage, human trafficking and state imposed forced labour. What all these highly exploitative practices have in common is one person, exploited by another, for personal or financial gain. At its core, slavery is a manifestation of extreme inequality represented in the removal of a person’s freedom. According to the Global Slavery Index, there are more than 40 million men, women and children living in a situation of slavery. In the past five years alone, some 90 million people have been subjected to modern slavery.

The Black Lives Matter movement brings into sharp focus the legacy of historical slavery. With the effects of colonization and the transatlantic slave trade still felt today, it underscores the need to address ongoing exploitation in our communities and call out injustice and entrenched discrimination.

In this light, we are right to focus on the world of fashion when it comes to this legacy and ongoing exploitation. According to Dana Thomas’s book Fashionopolis, the global fashion industry employs one out of every six people in the workforce, making it the most labour intensive industry in the world. Yet, fewer than 2% of this work force earn a living wage. Of all the industries which perpetuate exploitative work conditions and modern slavery, the fashion industry is considered one of the absolute worst. So the stark reality is that each and every one of us are connected to modern slavery in some way, with the true cost of our clothes often being another person’s freedom.

Do you regard slavery in fashion supply chains as a racist and/or feminist issue?

Absolutely. Everything that is wrong with fashion and its vast global supply chains comes back to a basic conversation about power and power structures. Who has control, who doesn’t, who is benefiting?

It’s not a coincidence that 71% of all victims of modern slavery are women and girls. It’s not a coincidence that the majority of those women and girls are people of colour. At its core, slavery is a manifestation of extreme inequality – one that is often coupled with vulnerabilities linked to gender, race and historical inequalities. It is difficult to reconcile how companies can sanction the exploitation of these mostly female workers on racial and gender grounds while purporting to champion the rights of women.  Nowhere does this manifest more visibly than feminist merch T-shirts which say ‘GIRLS CAN’ made in Bangladesh by girls who absolutely cannot.

Slavery persists in the world today because we let it – because we tolerate systems of inequality and racial injustice that allow it to occur. We must speak up to change these systems, to protect and empower all the people who make our clothes.

One of Walk Free’s reports this year delved into the risks Covid-19 has presented to migrant and vulnerable workers. From what you’ve seen, are governments and businesses doing enough to protect these people? Are there positive examples to highlight, or are there particular industries where there are greater risks for these groups?

Unfortunately, not nearly enough is being done by governments or business to protect migrant workers and other vulnerable workers from the impact of COVID-19. Many workers have been left stranded, with no income, no access to health care or government support and no way to get home. This is completely unacceptable as it stands, but compounded it also leaves these workers exceedingly vulnerable to exploitation and modern slavery. Brands and suppliers must do what they can to protect the people who have helped build their businesses from the ground up.

We have seen some positive stories of brands committing to pay for orders that are already in production, but this is really the minimum that we should expect.

Globally, we’ve also seen the creation of “worker funds” to assist vulnerable workers in supply chains. For example, the EU created a €5 million fund to assist garment workers in Myanmar and some brands have announced the creation of funds to assist workers in their supply chains. However, for the overwhelming majority we have seen a mass failure to act, compounded by negligence for the workers on the “bottom” of supply chains. This was highlighted recently by fast fashion giant Boohoo. Supplier factories linked to the company in Leicester were found to be exploiting workers in the height of the pandemic. Workers were paid less than half the minimum wage and given no opportunity to be socially distant, despite strict lockdowns being in place across the country. The brand’s philosophy of “we don’t take life, or fashion, too seriously” has been made abundantly clear.

Clean Clothes Campaign recently estimated that global garment workers are owed between $3.19 and $5.78 billion USD in unpaid wages. And in the wake of the pandemic, these workers are now more exposed than ever in being unable to support themselves and their families.

We’ve also observed that many migrant workers have suddenly been classified as “essential workers,” and are expected to continue working through lockdowns, often with inadequate PPE equipment. Many live in accommodation provided by their employers. This often involves sleeping in dormitories with multiple people in a room, meaning there is no real way for them to practice social distancing or to isolate if they get ill. The stark reality is that many workers in global supply chains will be forced to choose between starvation or the risk of infection.

Transparency is high on the agenda in sustainability circles but it’s an issue that often receives much criticism. Do you feel this criticism is fair, or that for businesses and governments transparency is an essential first step?

Yes, I think transparency is an essential first step – and that’s why supply chain transparency laws like Australia and the UK’s Modern Slavery Act are so important. For many companies, this is really the first time they are assessing the risk of modern slavery in their supply chains and starting conversations about it in the boardroom. Transparency is the base upon which all other change can be built, it’s the pivotal starting point.

Beyond transparency, we need to see real commitments towards a “zero fees” or “employer pays” recruitment model, and towards paying a living wage to every person throughout the supply chain. We also need companies to push for better labour standards in the countries they are investing in. They have real leverage to do this and it is this type of advocacy and collaboration between business and government that is really needed to transform industries. Moving one business at a time is completely unsustainable for the kind of systemic change this issue requires.

This year’s unprecedented events have caused drastic changes to the fashion industry, and consumers are increasingly demanding that brands are not only more transparent about their practices, but more ethical in all aspects of their operations too. Do you feel that fashion businesses are being held to account, and that real change is happening as a result of these global conversations?

When it comes to change, I’m impatient. We all should be.

Yes there is increased scrutiny but it is not happening at a pace fast enough to combat this enormous human rights issue. Despite being active in this space for almost a decade, we still regularly get reports of exploitation and slavery throughout major supply chains. Transparency is important but we need to move beyond transparency to engage in conversations about the true cost of labour. We know many migrant workers arrive in a country with debts equivalent to their first year of wages. That debt is made up of recruitment fees and other migration costs. Many people don’t realise that there is such a close link between those costs and debt bondage, a form of modern slavery. The debt, threats and coercion are used as a means of control and the worker cannot leave the situation.

This is why it is so important that brands and suppliers pay these fees and that the costs of recruitment and migration are built into global pricing models. Without this, it will always be the migrant worker, setting out to support their family, who cops the brunt of economic volatility, rather than the multi-national company in charge of the orders. These deeply inequitable power structures entrench both intergenerational poverty and deep social and racial injustice.

What do you think about the fact that it’s largely individuals and smaller organisations calling out injustice? Is this force strong enough to ensure greater protections, fairer practices and legislative change?

Every person and every business taking a stand for human rights is making a difference. Of course, for this movement to build from the level of agitator to change maker we need a chorus of voices. One positive development in recent years has been national governments taking a more active role to ensure goods and services are not made using forced labour. Australia and the UK now have Modern Slavery Acts which require companies to report on the steps they are taking to combat slavery. There are similar human rights due diligence laws in France and the EU.

Having laws in place is one thing – but for lasting change we need pressure from consumers and investors, coupled with international pressure from both business and government. As individuals, we need to think not just about the brands that we purchase from, but also other ways to apply pressure, whether as voters or as investors who can make more ethical decisions.

Given the current political climate, do you think we are realistically looking towards a fairer future in regard to modern slavery and the exploitation of workers?

COVID-19 is a global crisis; so too is the fact that millions of people are today living in modern slavery. We are capable of dealing with multiple challenges and we must seize the opportunity to build back better in the wake of this health crisis. I think there is very real opportunity to push for greater protections and fairer conditions as supply chains are re-established and the world emerges from the pandemic.

It is time to take a hard look at the intersection of the world’s most pressing challenges, rather than trying to deal with them all in isolation.

On the anniversary of the Rana Plaza collapse, Beatrice Murray-Nag asks how far we’ve come in the fight to change fast fashion.