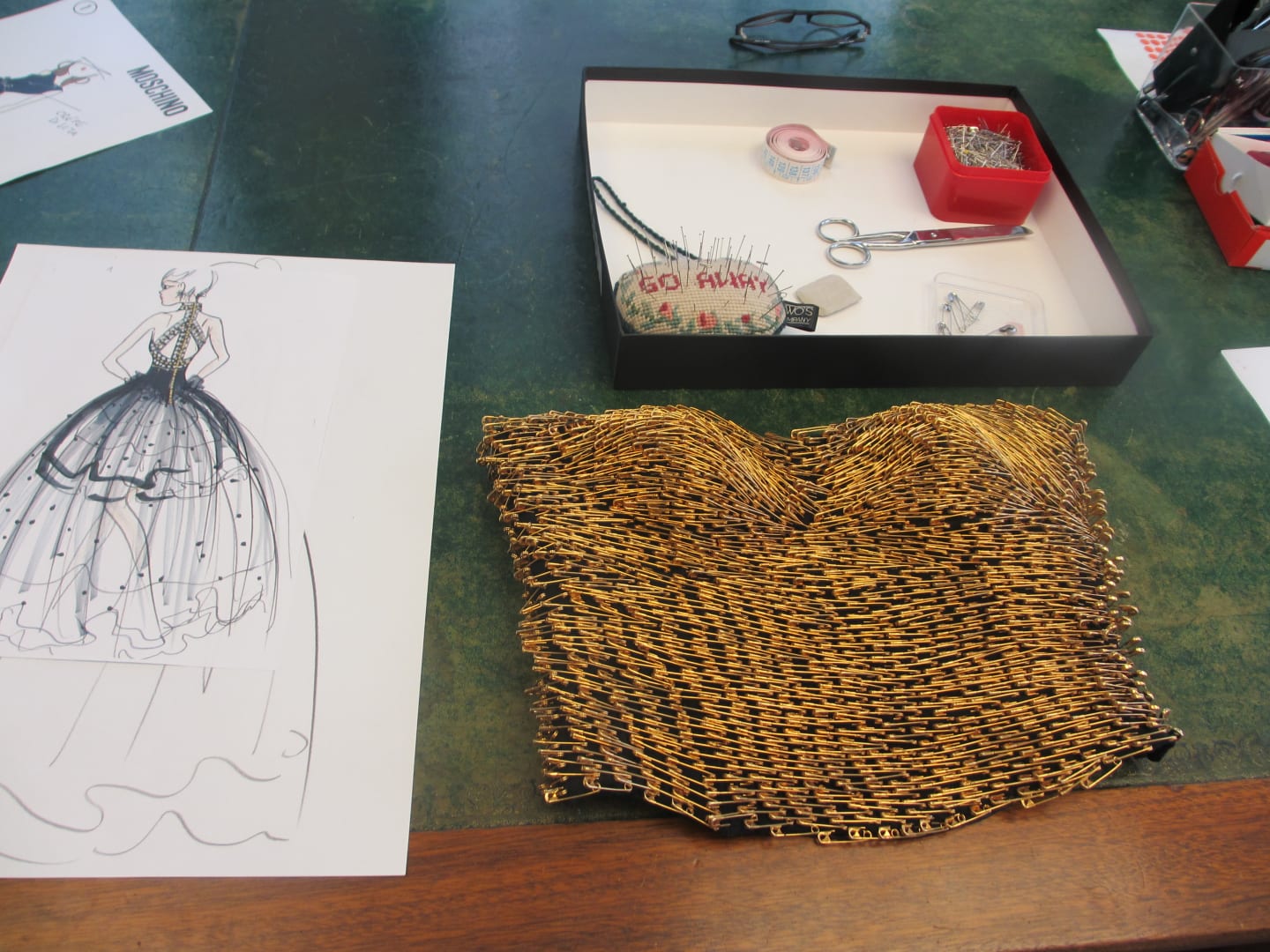 The Green Carpet Challenge: How it All Began

Today marks ten years since Livia Firth and Lucy Siegle began their mission to make the red carpet a little greener, starting at the Golden Globe Awards in January 2010. A decade later, the Green Carpet Challenge has seen designers and celebrities wordwide bring the best of sustainable fashion to the Awards Season. Lucy Siegle looks back at how the movement was born, as well as the highlights and challenges experienced along the way.

The 17th January holds special significance for Livia and I this year. It marks an anniversary; the Green Carpet Challenge, the fashion disruptor we came up with on a winter’s day in West London borne out of hope, opportunism and frustration is ten years old.

Ordinarily we don’t look back too much. It can feel self-indulgent and besides there is a huge amount of work to be done. It is no secret and no exaggeration to say that the fashion industry is even more out of control than it was a decade ago, failing to meet self appointed sustainability standards and producing a greater inventory than ever before. But one of the prizes that we have collectively claimed over the last decade is the rise of a fully formed and vociferous sustainable fashion industry in direct opposition to fast fashion. This is a big win. A recent piece by journalist, Sophie Benson, credited the Green Carpet Challenge with helping to build that movement. That’s high praise, and we’ll take it! It also made us realise that the Green Carpet Challenge is a story worth telling in its own right. 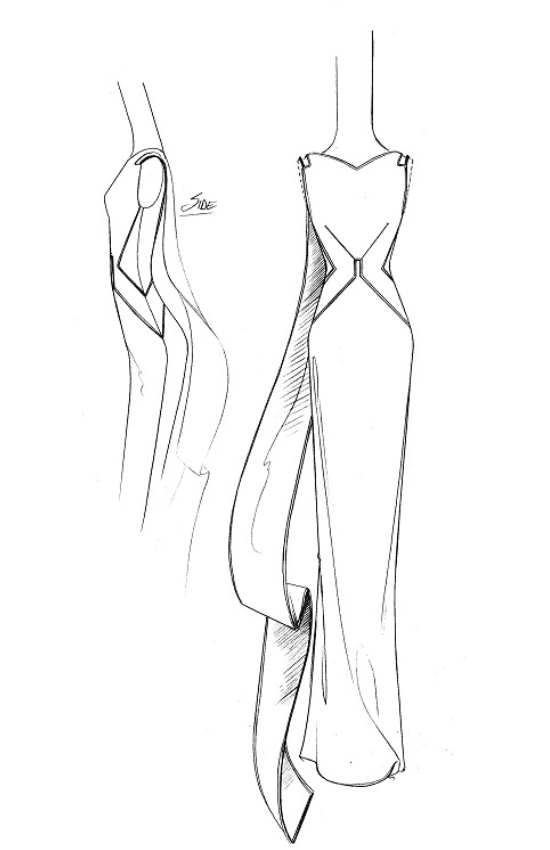 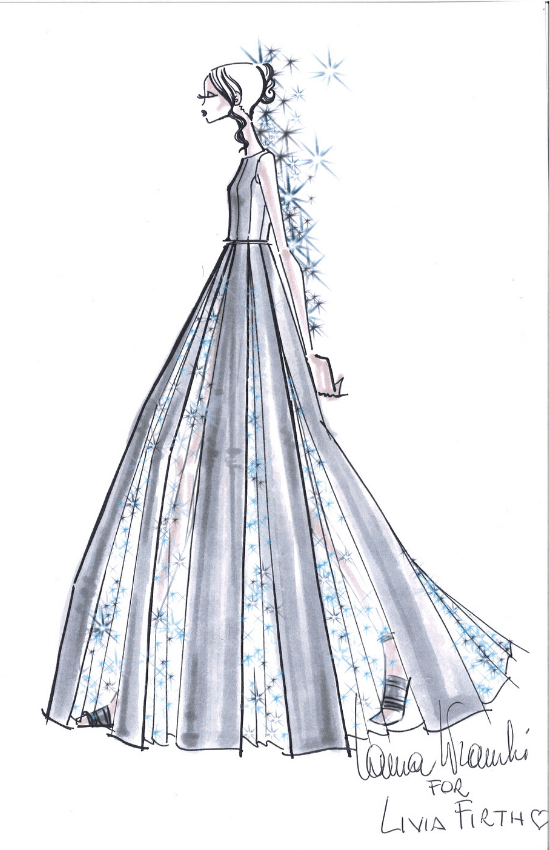 A decade ago Livia Firth was busy setting up her London based environmental business, (that became Eco-Age as we know it today) and I was an eco columnist for the Observer (a sort of agony aunt for the planet). I can still remember the conversation – or at least parts of it – as we surveyed Livia’s diary, blocked out for the Awards Season, beginning with the Golden Globes. If you live for red carpets and spending half a day being tended to by a glam squad before being ordered into an outfit by a harassed stylist and then squalked at by a reporter who wants to know ‘who are you wearing?’ before trying to remember, the awards season I’m sure is a tremendous opportunity. But if you do not live for this type of interaction, you’d probably look forward to it with all the enthusiasm of someone approaching an appointment for root canal. This is the vibe I was getting from Livia.

What there was enthusiasm for was our particular obsession, the reform of the fashion industry. We soon moved on from impending Hollywood doom, and talked about a designer we’d made contact with in the US who was dying a hemp mix fabric with indigo grown in his garden, then we started looking through some fabric samples of novel fibres made from waste products from the food industry – a protein from whey and crab shells. Livia always maintains that I challenged her, but I remember it as being like a cartoon where two characters get the same idea at the same time. ‘Runway, ethical fashion, designers, challenge them, showcase, platform for, hemp silk, repurpose,’ some sort of word cloud appeared. Then the more formal declaration, ‘Livia, I challenge you to do the entire awards season wearing only sustainable design.’ I had her attention. The Green Carpet Challenge was born. 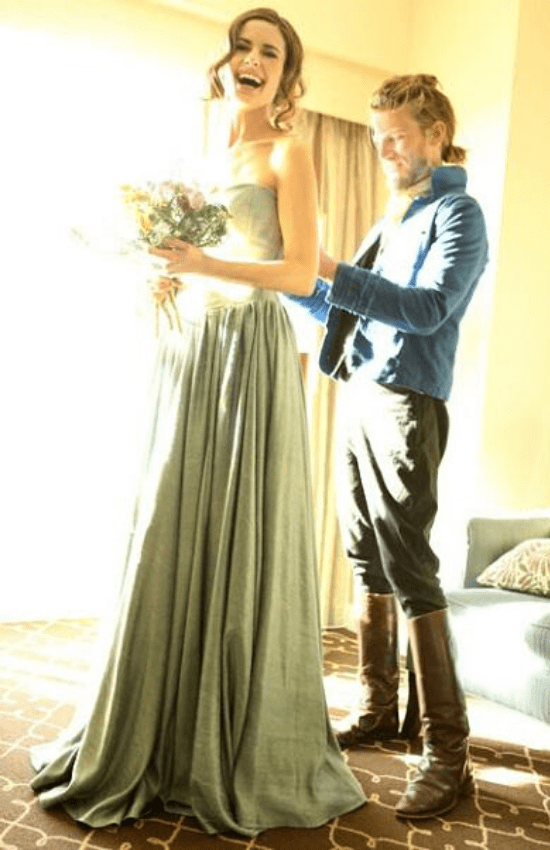 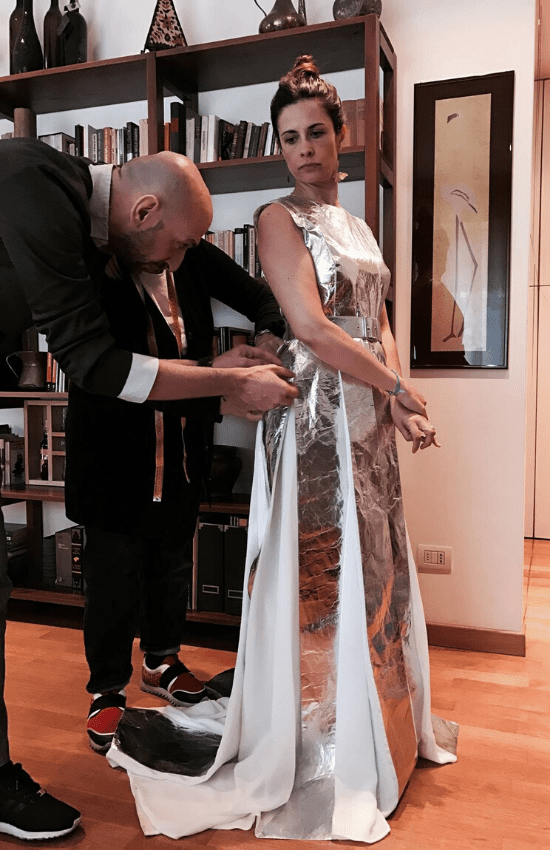 Images, from left: Livia tries on her peace silk gown by Prophetik for the 2011 Golden Globes, Livia is fitted in her Laura Strambi gown for the 2017 Met Gala.

It is strange to look back now, when sustainable fashion is so well discussed (although I would argue, it still doesn’t get enough airtime). Ten years ago, fashion’s great dirty secret was still largely unseen and untold.

This was despite the fact that trailblazers such as Katharine Hamnett had already spent years painstakingly joining the dots of production and ecological havoc – in Katharine’s case making the case for organic cotton. Once you started digging you could never stop. Between us, Livia and I had become fixated on the pitfalls and secrets in the fashion supply chain. We’d attended the first conferences at UK universities where research scientists talked about the impact of dyes and finishing chemicals on water courses in places where the international fashion supply chain reached but pollution laws and oversight did not. We went on the first of many trips to Bangladesh and made friends with garment workers courageously agitating for change, meeting after hours to plan forming a union. We also got a glimpse of the conditions they had to work in, posing as buyers in a factory.

Yet, wherever there was a horror story there was also a tale of innovation, change and hope. This was true from the garment workers we met who’d escaped Dhaka factories for a fairtrade facility where they were trained to make a whole garment for a living wage (rather than sewing one seam endlessly in slavery) through to the research scientists excitedly talking about green chemistry – including biodegradable, non toxic dyes. The fashion industry was bursting with problems, but also with solutions. In fashion theory there are 101 steps to creating a garment – from producing the fibre to getting the item online or instore, that gave us 101 opportunities to get things right.

We felt really strongly that these stories deserved to be told. At the same time we were really conscious that a stigma persisted. Ethical fashion (we worked really hard to brand it sustainable fashion) was considered unfashionable and undesirable. Much in the same way that the concept of Fairtrade grocery products was written off (notably by supermarket supremoes) some 30 years ago as ‘biscuits for vicars’, ethical fashion was considered the preserve of a few do-gooders with a penchant for patchwork. Today the Fairtrade foundation certifies over 5000 product lines, including bananas (famously) and gold – which we have also championed through The Green Carpet Challenge. All of which goes to show that although we were constantly told that there wasn’t an audience for a different type of fashion industry, we were right to ignore that warning! Turns out there was an incredible global audience just waiting for a sustainable fashion disruptor. 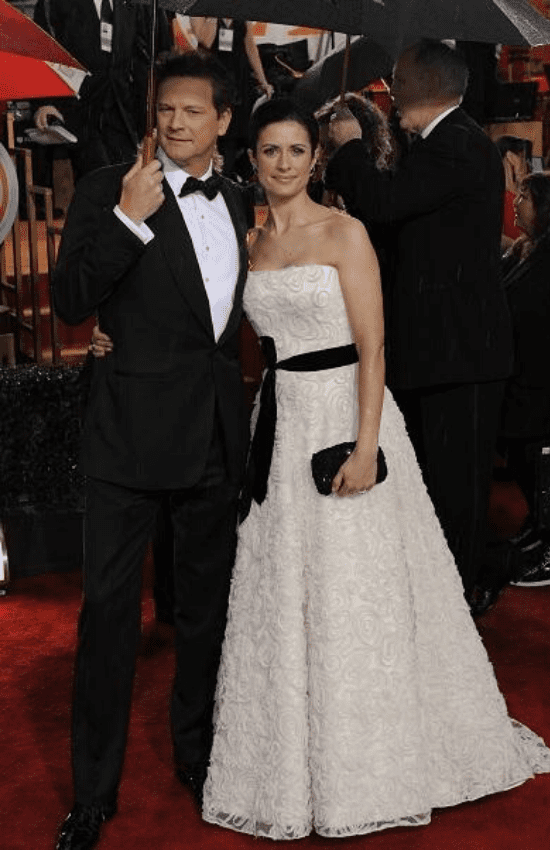 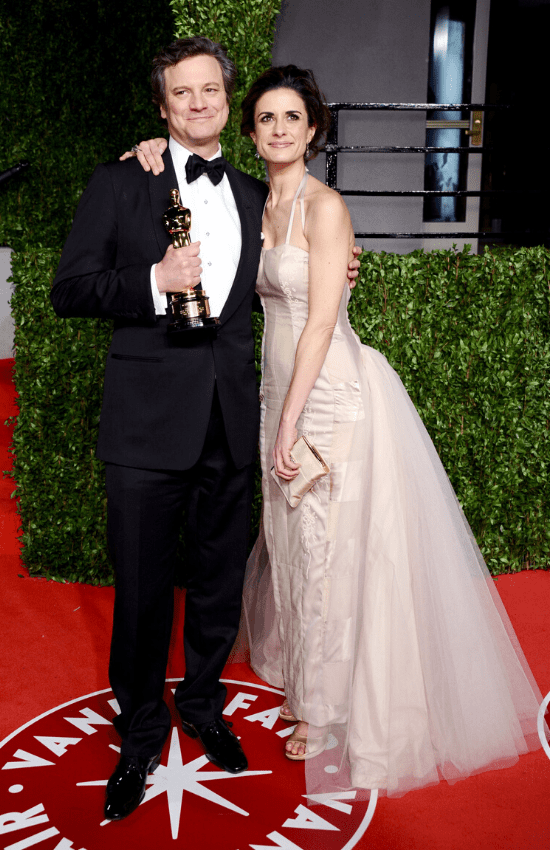 Images, from left: Livia wears an upcycled wedding dress by Christiana Couture to the 2010 Golden Globes, Livia wears a gown crafted from 11 different 1930s vintage dresses to the 2011 Academy Awards.

We were wrong about plenty of other things of course. We had a number of interesting outings during the first phase of the Green Carpet Challenge, which while they can’t be classified as outright disasters, must have given Livia palpitations as she tried to carry a confident smile and the hopes and dreams of a burgeoning fashion movement. For instance, there were some courageous choices in fabrication. Whereas structured silks, and synthetic blends have been tested under all sorts of fashion conditions, a novel hemp fibre hasn’t necessarily. There was a memorable red carpet moment where a hemp blend bustier seemed to grow, and another where the dress shed vintage bugle beads. Sometimes we just failed to communicate what we were doing adequately. One designer who specialised in restoration, salvaged some pieces of a patterned fabric from several 1930s dresses and reworked them into a piece for us. In an example of early trolling he was accused of a massacre of ancient dresses as if he had run through the textiles department of the V&A with a pair of pinking shears. But in truth, nothing could take the shine off. 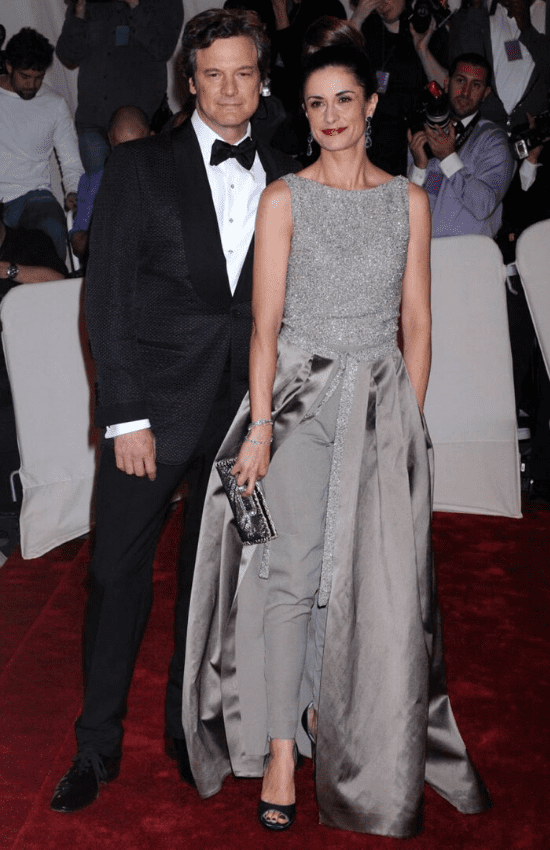 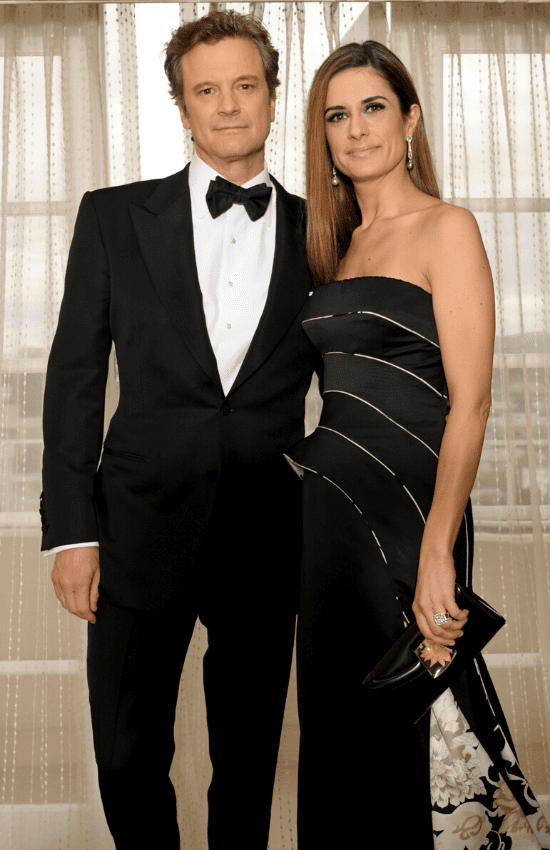 The 67th Golden Globes was broadcast live from the Beverly Hilton in Beverly Hills, California on January 17th, 2010. British comedian, Ricky Gervais presented and for the first time in its 67 year history the event was broadcast live. So was the red carpet. At home in the UK, in the wee small hours, I scrutinised the figure of Livia making her way down the carpet in a repurposed wedding dress and it was genuinely exciting. We chose our first outing to make a statement on reuse, picking the dress from rails of once worn beautiful gowns with no discernible future plans. Livia added a simple black belt tie, and the dress – the founder member of the GCC archive – suddenly had an entirely different future. For the night Livia teamed it with vintage jewellery and her own pair of jewel coloured Roger Vivier shoes (worn so often on this challenge that I have come to think of them as members of the team)

But of course, it wasn’t about a single dress. The idea of re-wear and repurpose seemed revolutionary during the Awards Seasons of 2010, and unfortunately it still does. It was designed as a conversation starter, and it really did get talked about even if it flummoxed the UK entertainment correspondent waiting in the press pen. ‘Well have a good wedding!’ he volunteered after Livia’s very assured explanation to the perennial ‘who are you wearing?’ question. He seemed to think she was having a Miss Havisham moment.

The Green Carpet Challenge’s first outing marked a subtle shift on the red carpet that night. Livia remembers thinking ‘OK we’re up and running!’ and thinking about all the opportunities we would have to showcase sustainable design firsts. Because it was televised we were able to alert all of the sustainable designers, makers and enthusiasts we had met from different countries, and they could also watch the repurposed wedding dress holding its own alongside all the ‘mainstream’ names who used the Awards Season as a brand building exercise; and in a twist of fate many of whom would later also join the GCC. 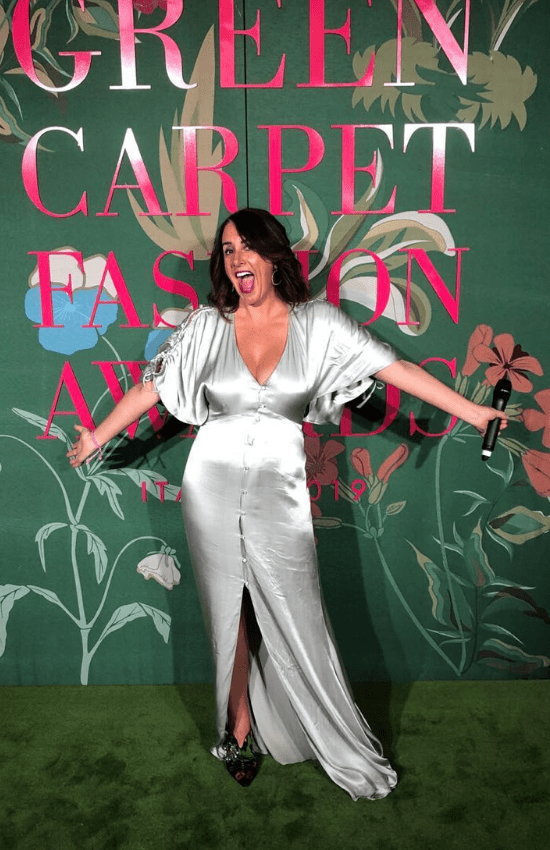 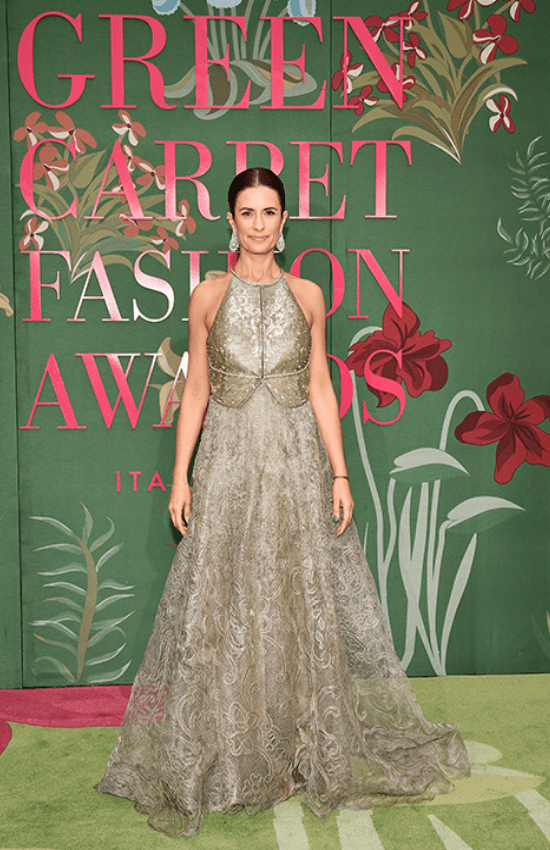 ‘On that first GCC outing to the Golden Globes we were really sending a lot of messages,’ recalls Livia, ‘we were saying to that first crop of designers and makers who were activists and sustainable designers that they also deserved a spot on this platform. The whole point of the Green Carpet Challenge initially was to work with them for a change. They are empowered people and had really influenced me and I found that when I wore clothes that had been made by these designers, a bit of that spirit rubbed off on me. I wanted it to be the start of something’.

And it definitely was. Over the next few months, we’ll dip into more of the GCC archive. We’ll talk about the sustainable trailblazers we collaborated with, the A-list stars who joined the movement and the top flight designers who designed for them and the many fashion disruptors today who tell us The GCC inspired them. As ever, we’d love to hear your stories too especially if you have any favourite GCC moments.

See all of Livia Firth’s Green Carpet Challenge looks from 2010 to today.

Discover the best of the Green Carpet Challenge at the Met Gala.