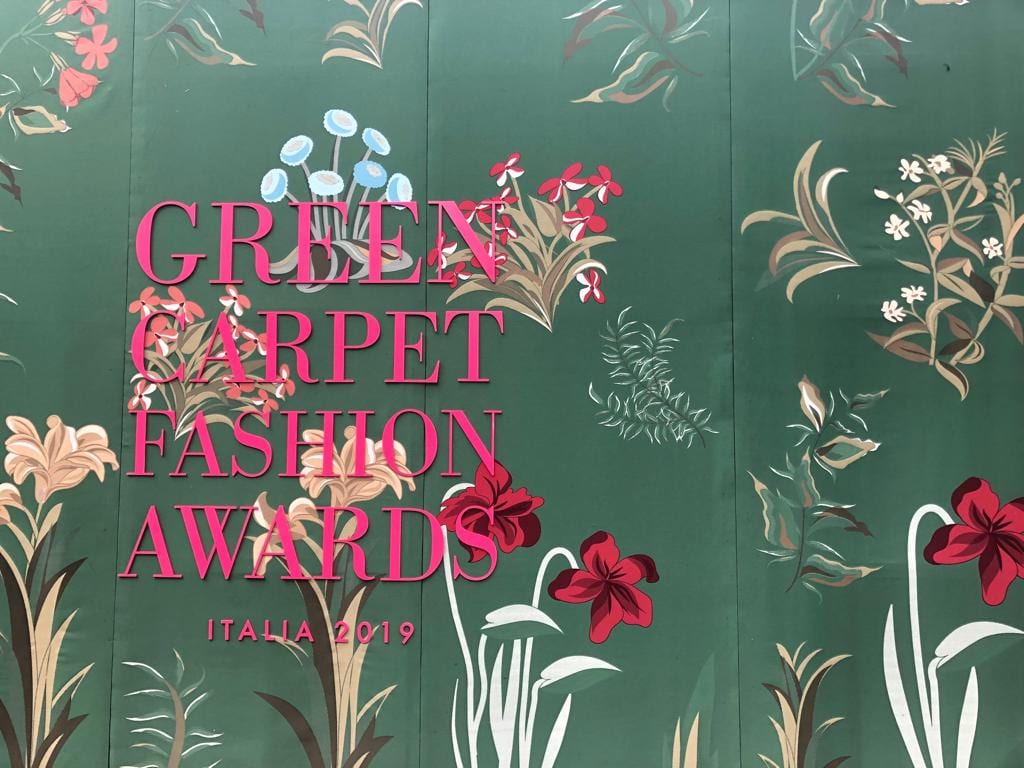 Discover who won what at this year’s glittering Green Carpet Fashion Awards, Italia 2019:

Guests walked the carpet before enjoying a champagne reception in the La Scala Square garden, which was designed by the award’s creative director and American Vogue’s international editor at large, Hamish Bowles. This year’s sustainable green carpet covered Piazza La Scala using more than 2,000 square metres of ECONYL ® regenerated nylon. Created from rescued fishing nets and other nylon waste, the carpet provided the backdrop for the event, and following the awards will be recycled or repurposed.

All plants and flowers used in the production of the event will donated to the City of Milan and re-planted after the awards.

The Eco Stewardship Award – The Association of Venetian Gondoliers

The CMNI in Recognition of Sustainability Award – Max Mara and Zegna

The GCFA Award for Technology and Innovation – SprintItaly and SICIT

The Responsible Disruption Award –  I Was a Sari 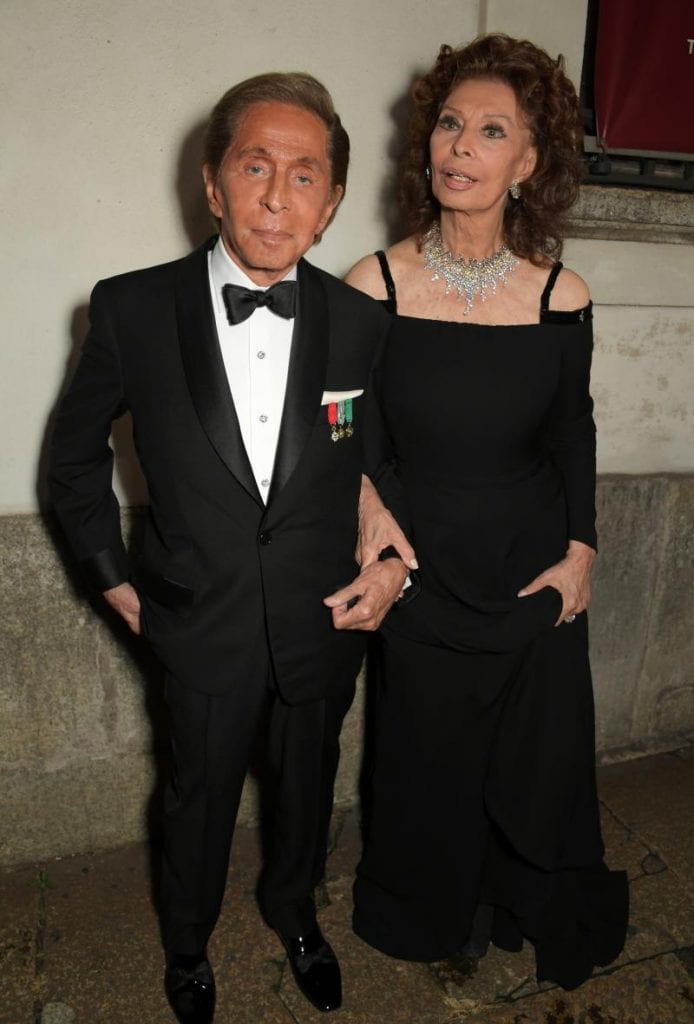 Sophia Loren presented Valentino Garavani, founder of Valentino, with The GCFA Legacy Award for his iconic work spanning over five decades, championing Italian talent, design and fashion.  The award recognised the quality and durability of his label’s creations and the legacy of these pieces being passed on for generations – the opposite of fast disposable fashion “I’m proud and happy to receive this special award in the prestigious Teatro alla Scala – a unique stage for the Italian art, talent and creativity,” said Valentino. 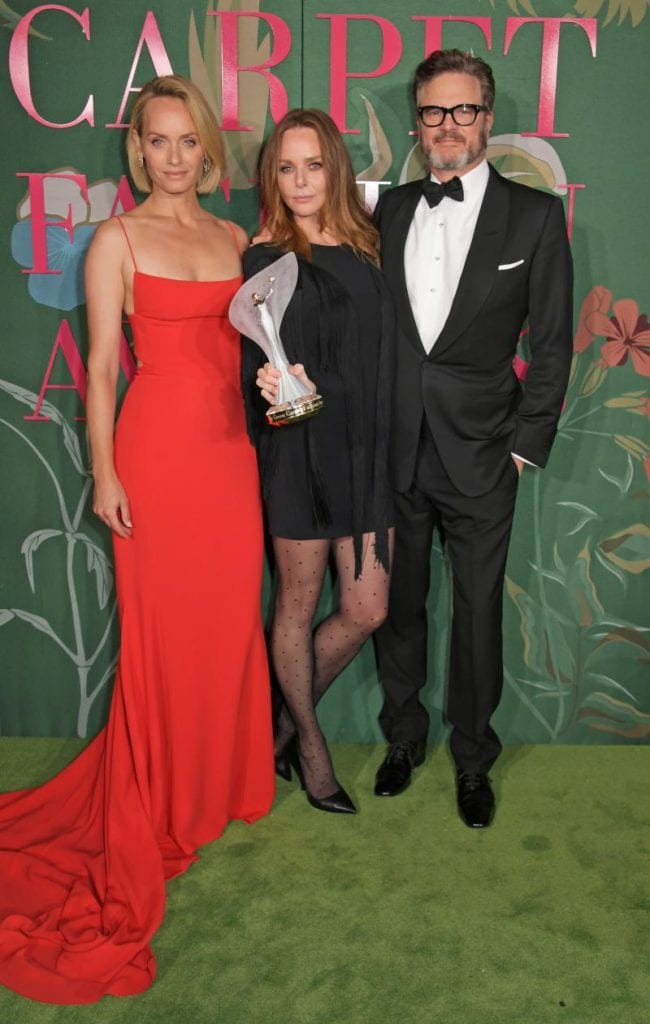 Colin Firth and Amber Valletta presented Stella McCartney with The GCFA Groundbreaker Award for her pioneering work. Since the beginning of her career, McCartney has diligently mapped the industry and used evidence to make ground-breaking interventions that lighten the impact of the fashion supply chain and reconfigure it for the future. 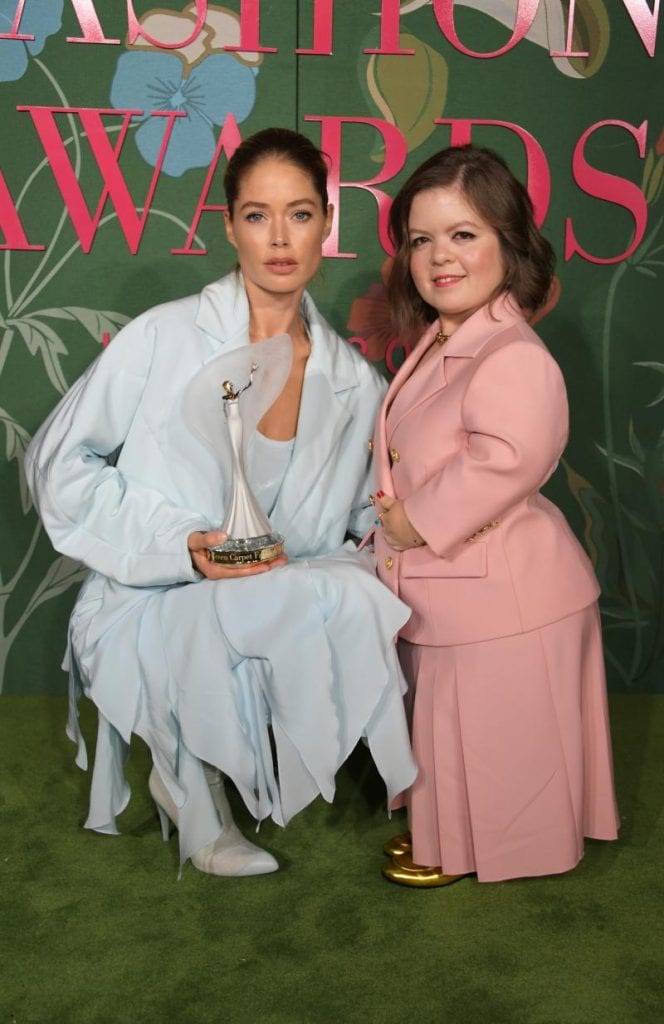 Royal Ballet dancer Eric Underwood and activist Sinead Burke presented Doutzen Kroes with The Social Media Changemaker Award, for using social media for social good. Kroes is currently at the forefront of creating change through the platform of social media, securing billions of impressions for environmental and social causes including groundbreaking campaign #KnotOnMyPlanet.

Ginevra Elkann presented François-Henri Pinault, chairman and CEO of Kering Group, with the GCFA Visionary Award.  Pinault has allowed sustainability to become a core part of the market value rather than a cost of doing business. He has created powerful tools, such as the Environmental Profit and Loss methodology, in remodelling the fashion industry in favour of the environment. 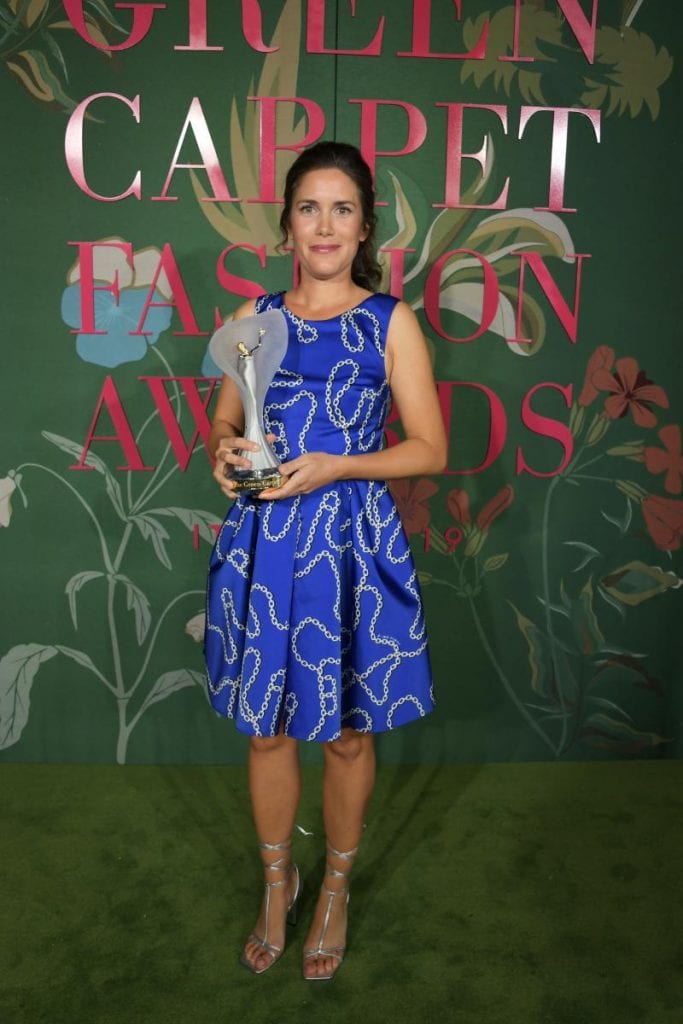 Veronika Mikos accepted the The GCFA Circular Economy Award on behalf of Healthy Seas.  The Healthy Seas divers were awarded the Circular Economy Award by Prada’s Lorenzo Bertelli, for the heroic story of skill and courage of their specialist team of divers. Divers collect discarded ghost fishing nets that are then combined with other nylon waste and regenerated into ECONYL ® yarn by Aquafil and used throughout the fashion and textile industry. 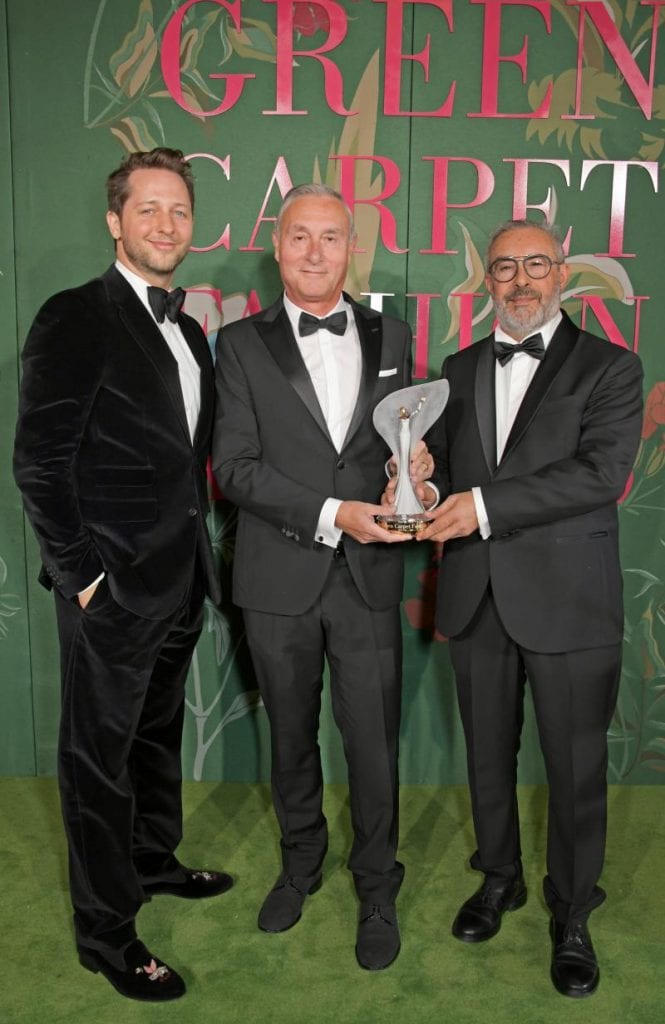 SprintItaly and SICIT received the GCFA Award for Technology and Innovation

Derek Blasberg, SICIT president Valter Peretti and Massimo Neresini accepting the GCFA Award for Technology and Innovation for SprintItaly and SICIT – who were awarded for their collaboration to tackle issues of waste, pollution and circularity in the leather industry. 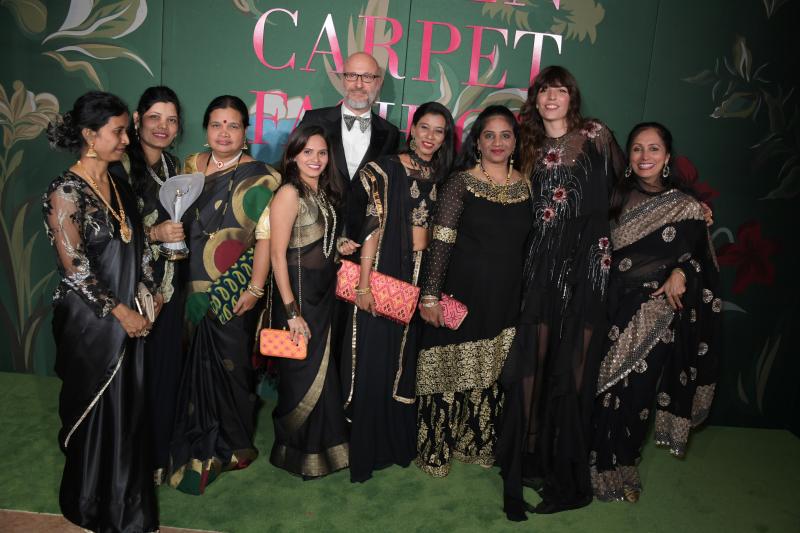 I Was A Sari received The Responsible Disruption Award

The Responsible Disruption Award was won by I Was A Sari and presented by actress and singer Lou Doillon. I Was A Sari’s inspiring journey was developed by Stefano Funari in Mumbai where women who were previously excluded from embroidery schools were finally given access to train. The programme has created a legacy of social empowerment and commitment to the circular economy by upcycling saris and empowering women long term. Gucci has partnered with I Was A Sari since the beginning, as this project perfectly encapsulates Gucci’s drive toward social empowerment and commitment to the circular economy. 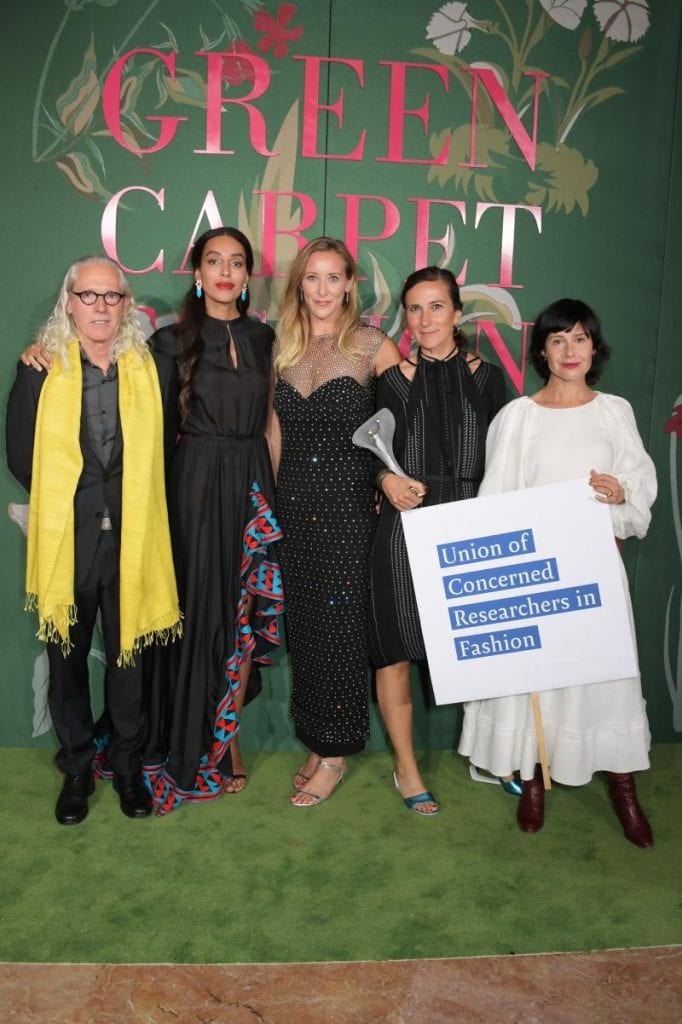 Colin Firth and Lea T presented NYU Stern Centre for Business and Human Rights and The Union of Concerned Researchers in Fashion – two organisations that have combined world class research on sustainability issues – with the GCFA North Star Award.  The award acknowledged two of the most important academic and political research developments in the last 12 months; NYU Stern’s report – Made in Ethiopia: challenges in the garments industry’s new frontier (May 2019) and The Union of Concerned Researchers in Fashion for its tireless and diligent work in aims to change the face of fashion. 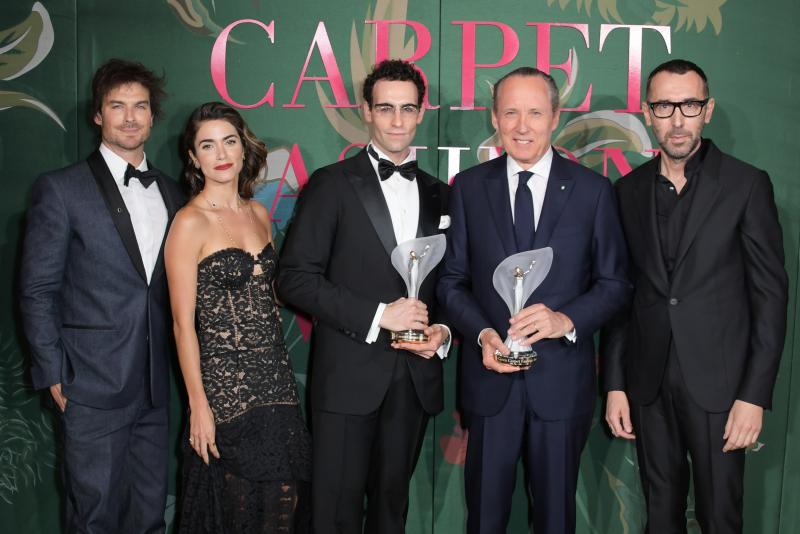 Ian Somerhalder and Nikki Reed presented Elia Maramotti, Gildo Zegna and Ermenegildo Zegna artistic director Alessandro Sartori with the The CNMI Award In Recognition Of Sustainability on behalf of Max Mara and Zegna x Use the Existing Project, awarded for their Cameluxe programme.

The Art of Craftsmanship Award was given on stage by Pier Paolo Piccioli, creative director at Valentino who has long championed craftsmanship in his atelier, to Pino Grasso. For the last 60 years Grasso has championed artisanal embroidery done by hand, Pino Grasso is seen to not only preserve traditional handicraft, but also by avoiding machine embroidery, Grasso minimises carbon emissions. 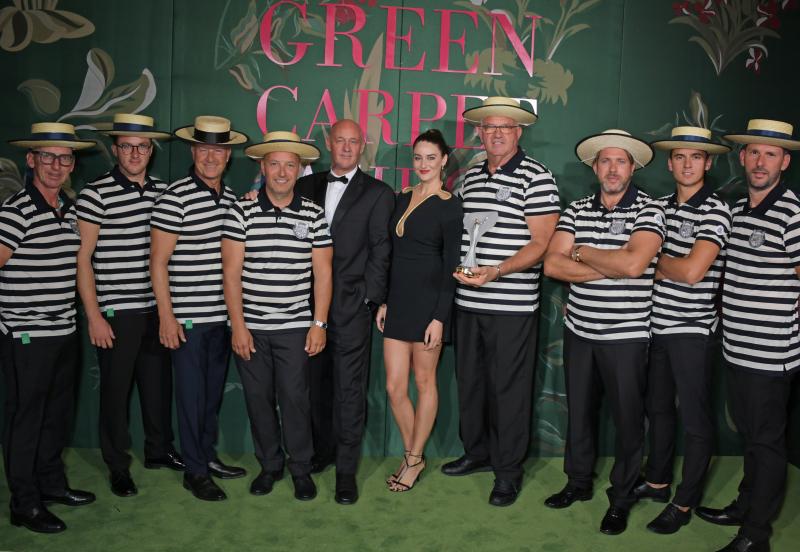 The Association of Venetian Gondoliers received The Eco Stewardship Award

Shailene Woodley presented 8 gondoliers representing The Association of Venetian Gondoliers with The Eco Stewardship Award for its use of responsibly sourced Australian merino wool in the iconic uniform of its gondoliers, created by Emilio Ceccato in collaboration with The Woolmark Company. “This year’s Eco-Stewardship award links the outfits of 400 gondoliers in Venice with Australia’s finest merino herds thanks to a brilliant project re-connecting a centuries-old-tradition with a centuries-old-fibre,” said Shailene.

All photos by David M. Benett/Dave Benett/Getty Images for Eco-Age.

Watch all the highlights from this year’s awards.

Watch as Livia Firth travels to Venice to meet the famous gondoliers and learn more about their iconic uniforms.

Meet all the finalists of the 2019 Green Carpet Talent Competition, and what the judges thought of the designs.

See all of last year’s winners.