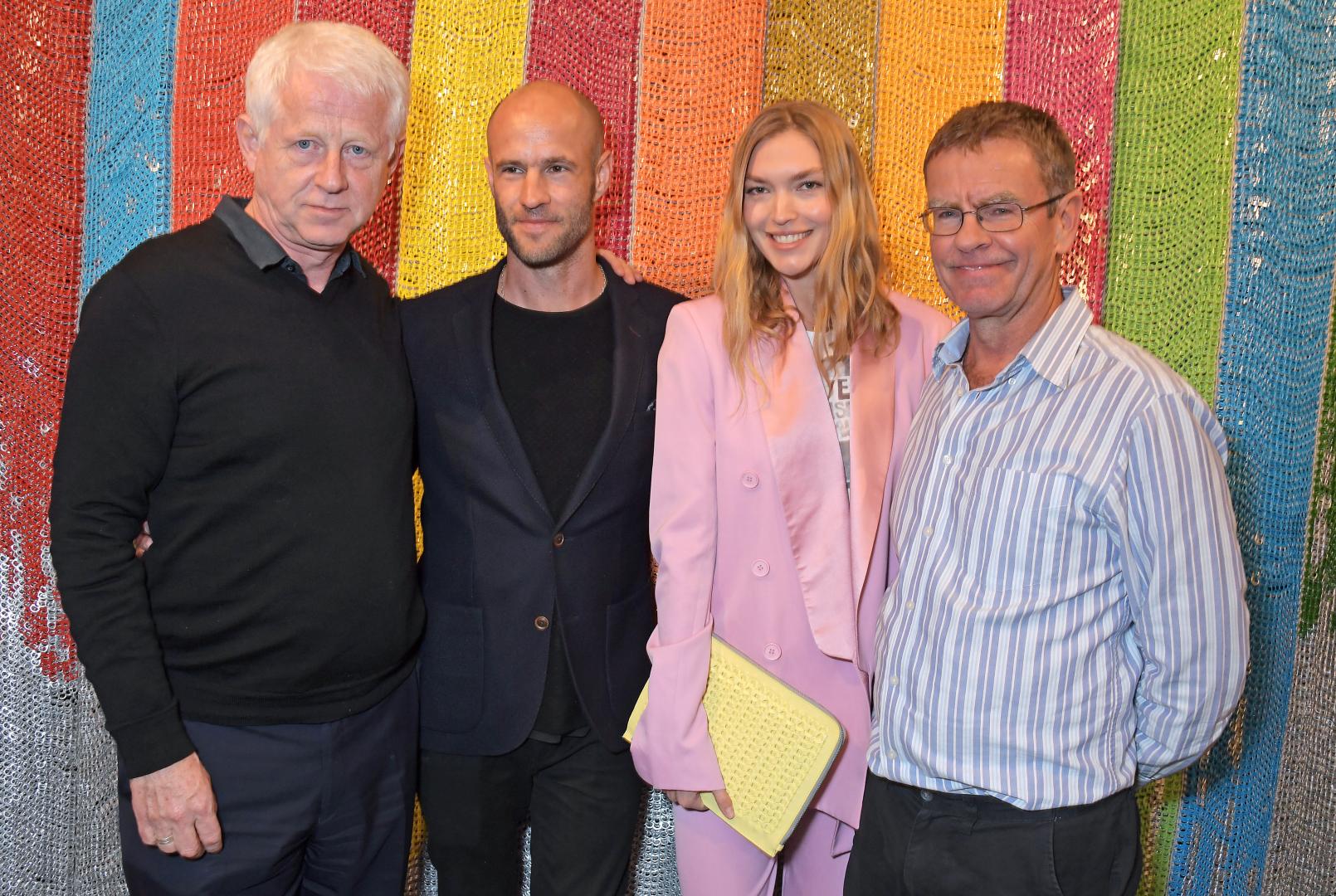 This week Bottletop launched the #TOGETHERBAND campaign; which last night Cameron Saul and Oliver Wayman celebrated in central London with Arizona Muse, Livia Firth, Richard Curtis and others.  We spoke to Bottletop co-founder Cameron about the campaign and how he hopes it will generate global awareness of the UN’s Global Goals.

After spending nine months teaching health education in Uganda and inspired by the young people he was teaching, Cameron Saul came to the realisation that sustainable design could be a way to generate funding to support that kind of health education.  This realisation led to the creation of the Bottletop Foundation, which he launched in 2012 with his father Roger.  Bottletop is now both a registered UK charity and a for-profit, mission-driven business creating luxury, sustainable accessories. This week, Bottletop launched its 17-month #TOGETHERBAND campaign, aiming to engage over a billion people with the UN Global Goals in partnership with the UN Foundation, WWF-UK, Project Everyone, Eco-Age, to.org, MECA, Global Citizen and the Founding Partner UBS.

Here Cameron tells us more about the inspiration behind the campaign, and the sustainably and ethically-produced friendship bands that are at the heart of it.

What inspired the #TOGETHERBAND campaign?

#TOGETHERBAND was really inspired by our learning about the 17 UN Global Goals for sustainable development back in September 2015 when we first met Amina Mohammed, the current Deputy Secretary-General for the UN. She was inspired by our work with Bottletop and the approach that we take of using sustainable design to empower our artisans and raise funds for health education programs for young people. She introduced us to the UN Foundation and the UN Foundation asked us what we could do to create a campaign to galvanize global interest and engagement with the goals. So, we set out to design a product that could be universal, that could be adopted by people of all ages, backgrounds and cultures– something that would be both a symbol of the sustainable development goals. The creation of the bands impacts 12 of the 17 goals and each band is in the colour of the goal that the person chooses. We were inspired by the Global Goals to create the campaign, such that we could support the success and achievement of the goals.

What do you hope the #TOGETHERBAND campaign will achieve?

We’re setting out to generate global awareness of the sustainable development goals. Our belief is that the Global Goals will only be achieved if the people of the world are aware of them and are mobilized in support of the goals. Our hope for the campaign is that we both educate people about the goals, and inspire them to get active and to really support the delivery of the goals. We also hope that we’ll raise significant funding for extraordinary projects, grassroots projects, that are advancing the goals, and that we will connect the general public with amazing projects that they can support above and beyond the funds that we’re raising through their purchasing of the bands.

How are the bracelets made?

The bracelets are made by amazing women working as artisans at two workshops that we have partnered with in Kathmandu, Nepal, where we are supporting marginalised women who are participating in the project as part of a wider, sustainable design program. The materials are also amazing. The rope section of the band is made from upcycled ocean plastic that’s collected from coastal areas in Costa Rica, and the clasps are made from illegal firearm metal from gang warfare struggles in El Salvador. Again, the impact on people and planet through the making of the bands is quite special and we’re really excited about that.

Which of the UN Global Goals is closest to your heart and why?

There are a few. I think probably, the top three for me, are the ones which align most closely with our work at Bottletop. The first one is Goal Number 1: No poverty. We’ve obviously been working for 17 years through Bottletop to use sustainable design to create skills and livelihoods for our artisans in challenging parts of the world, and ultimately, that’s about poverty alleviation and it’s about financial economic empowerment. We love Goal 1.  Goal 4: Quality education is also super close to my heart. That was the inspiration behind us starting Bottletop, was the nine months that I spent teaching health education in Uganda back in 2000. It was a desire to help support health education programs globally that we launched Bottletop. So, quality education matters for me. Gender equality, Goal 5, is also critical. I think the world will only thrive if women thrive. We’ve seen time and again how it’s women being economically empowered that really makes a difference in developing parts of the world, in terms of families and wider community support. We believe that it’s crucial that women are supported to succeed in all levels, spheres, and parts of the world. Also, responsible consumption and production is also a really important goal for us because I think cleaning the world’s supply chain and making sure that transparency is present and people are supported and paid properly for the work that they do, and that people become informed– consuming in proper ways is critical in terms of the day-to-day impact that all of us could have in working towards a healthy planet. Those are the four goals that are closest to my heart.

How has BOTTLETOP evolved as you have grown?

I think Bottletop has evolved in a truly organic way where we have responded to the gradual shifting of the wider landscape globally, in terms of what’s happening. We’ve looked at how we can adapt what we do to meet those challenges and support those people that we care about as far as our mission is concerned.  I would say that our mission has broadened, and the #TOGETHERBAND campaign is a great example of that, but, still very much staying true to our mission of empowering people economically and young people with health education.

Our sustainable priorities as a business are both in terms of maximizing our impact through our operations. So, really, that’s about the sustainable sourcing and the utilization of upcycled materials in the creation of our products. It’s about understanding and offsetting our carbon footprint, looking after our people in our supply chains and everybody that works with the business. That’s about maximising the impact that we have through our foundation on the lives of young people, and that’s about executing the #TOGETHERBAND campaign on the biggest possible platform, and really setting an example that the wider fashion industry can follow. Those are our priorities.

Read more about the #TOGETHERBAND campaign and how you can get involved.

What To Do About Black Friday?
Chopard and Andrea Bocelli Foundation Rebuild School in Muccia
Pirarucu Leather Awarded the GCC® Brandmark
International Day of Charity: 11 Brands that Give Back