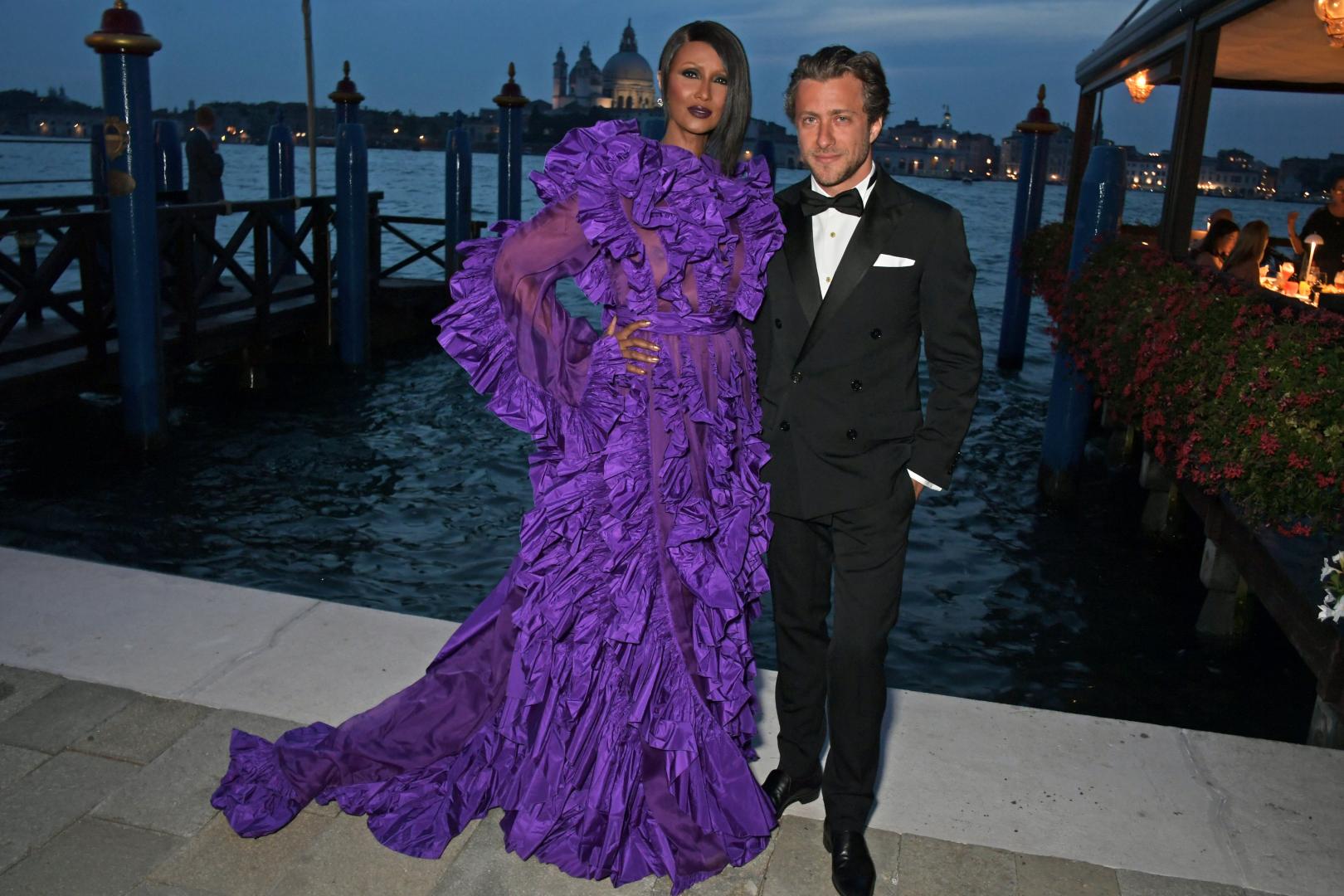 Guests Colin Firth, Ruth Negga, Rupert Everett, Isabeli Fontana and Derek Blasberg celebrated Iman’s achievements at an exclusive dinner on the eve of the 76th Venice Film Festival. See all the highlights from the night.

Iman Abdulmajid last night accepted the third Franca Sozzani Award, which recognises women who stand out for both their artistic careers and their social commitment, during an exclusive dinner at the Belmond Hotel Cipriani on Venice’s Giudecca island – a favourite of late Vogue Italia editor Franca Sozzani. Previous recipients of the award are Julianne Moore in 2017 and Salma Hayek in 2018.

The award recognised Abdulmajid’s work as a veteran in the fashion industry from her beginnings as a pioneering model in 1975, to her development of skincare collections designed for women of colour. She has accomplished all of this while also pursuing humanitarian work for The Children’s Defence Fund, Action Against Hunger and the Raise Hope For Congo campaign.

Abdulmajid was handed the award by Valentino creative director Pierpaolo Piccioli.  In a speech during the event, Iman said: “I could not possibly be more grateful for the pioneering nature of this award and for Franca Sozzani, whose name alone is a synonym for her humanitarian nature and perfect ideals. She knocked from the pedestal the wilfully incomplete one-dimensional standard of beauty and replaced it with all the colours and outlines of the world. Now isn’t that Vogue?” 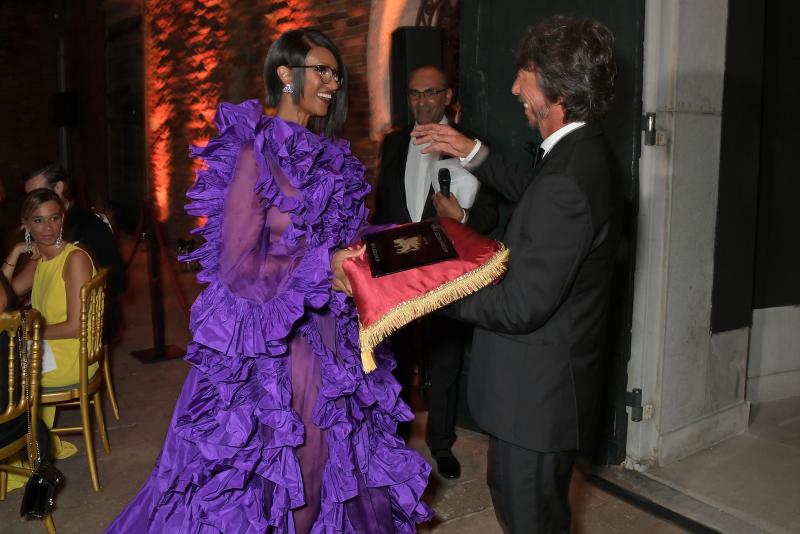 Franca Sozzani made a remarkable impact on global culture during her 28 years as the legendary editor-in-chief of Vogue Italia. Outside of fashion, she was a relentless champion of justice and human progress: a global ambassador against hunger for the United Nations World Food Programme, a supporter of AIDS research, and a chair of the European Institute of Oncology. Franca recognised that fashion and creativity held a unique power to deliver social messages, and in ground-breaking issues of Vogue Italia used beautiful images to explore difficult topics from oil spills to domestic violence.

Friend of Franca’s, Tommy Hilfiger, added:  “Even more than her role as a visionary fashion icon, Franca Sozzani will forever be remembered for her philanthropic work. Her warm and loving personality was always touching, and every moment that I spent with her was an incredibly inspiring experience.” 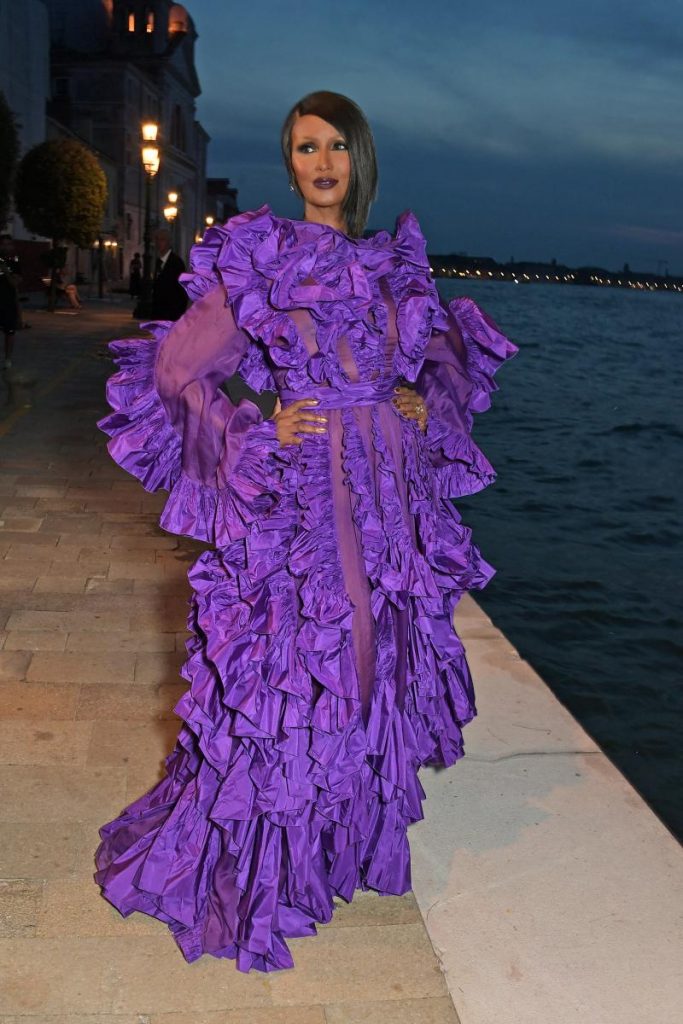 For the first time, the Award dinner also supported the The Franca Sozzani Fund for Preventive Genomics in honour of Sozzani, who succumbed to a rare cancer in 2016. The Franca Fund was established in 2018 by founder of the Franca Sozzani Award,photographer, filmmaker and son of the late Vogue Italia editor Francesco Carrozzini; performing artist and investor D.A. Wallach and Harvard Medical School professor and physician-scientist Dr Robert Green to accelerate the use of genomics in preventive health.

In fashion, as in all walks of life, brilliant and creative individuals and their families are struggling with autism, cancer, heart disease, Alzheimer’s and other conditions that we now know have largely genetic causes. Tragically, Franca succumbed to a rare cancer in 2016 that might have been prevented with earlier medical surveillance. Such is the case for thousands of patients around the world today who lack access to the risk-assessment and early diagnoses that are offered by preventive genomics.

In Franca’s honour, her son Francesco has established The Franca Sozzani Fund for Preventive Genomics (The Franca Fund) to accelerate the transformation of medicine by promoting the scientific applications of preventive genomics.

Read more about this year’s winner of the Franca Sozzani Award – Iman Abdulmajid.