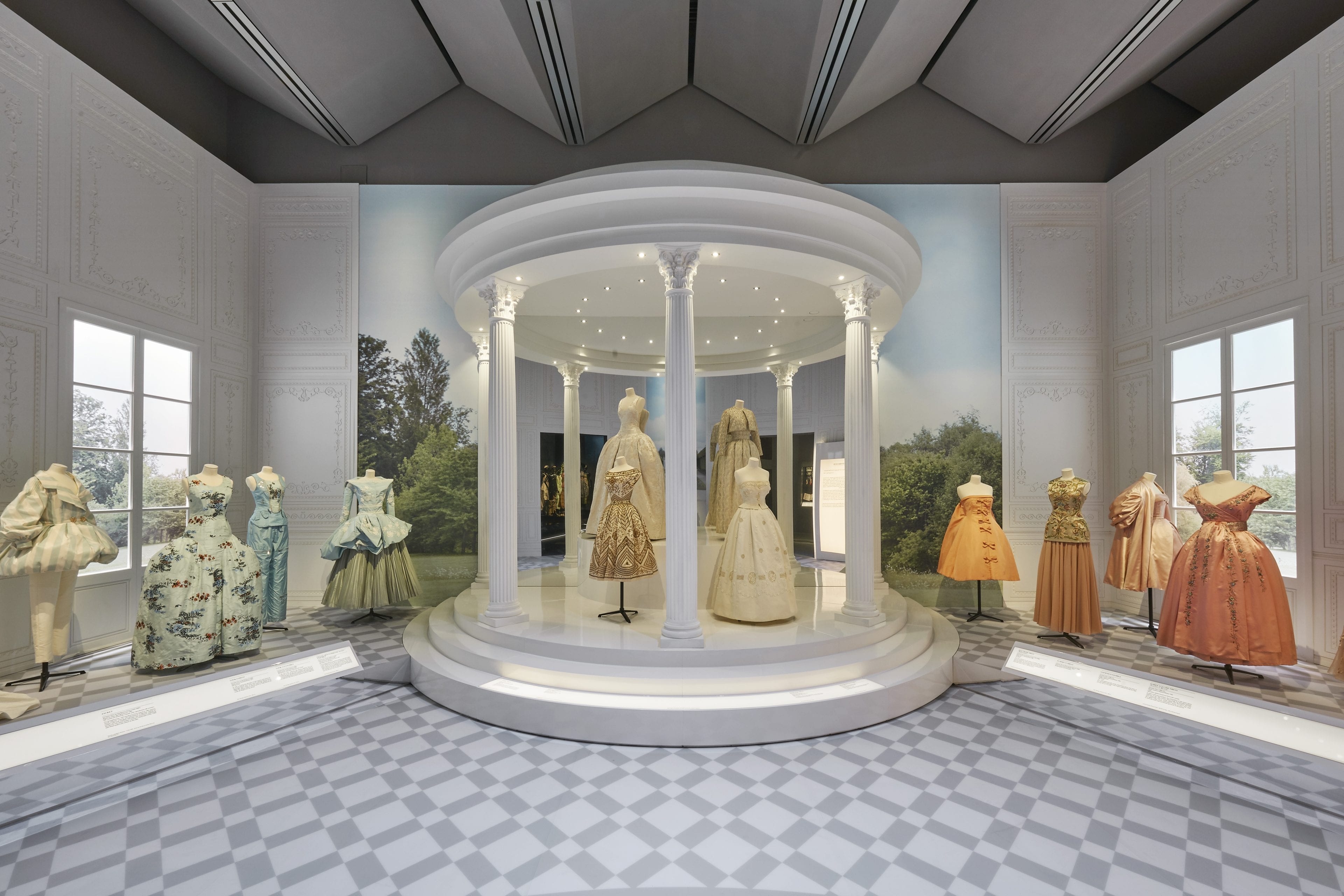 Celebrating Craftsmanship – Inside the V&A’s Christian Dior: Designer of Dreams

This weekend the V&A Museum opens the largest ever UK exhibition of the House of Dior – Christian Dior: Designer of Dreams.  The exhibition brings an in-depth study of Christian Dior’s unique Haute Couture garments since 1947 to London and displays the exquisite craftsmanship that goes into making each piece.

“Everything created by human hands expresses something – above all the personality of the creator. The same thing is true with a dress. But since so many people are working on it, the real job is to get all of the hands that cut, sew, try on and embroider to express all I have felt.” – Christian Dior, 1954.

From horticulture to global travel and 18th-century decorative arts, the V&A’s latest exhibition Christian Dior: Designer of Dreams reveals the sources of inspiration that defined the House of Dior’s aesthetic. From the daring designs of Yves Saint Laurent to the rational style of Marc Bohan, the flamboyance of Gianfranco Ferré, the exuberance of John Galliano, the minimalism of Raf Simons, and Maria Grazia Chiuri’s feminist vision of fashion, the exhibition shows how each successive artistic director has stayed true to Dior’s vision of Haute Couture, while bringing their own creative sensibilities to the House.  And underpinning this story, as always, are the makers – who turn the designer’s visions into stunning, fairytale gown reality.

Walking through the exhibition, you can begin to understand the incredible skill, vision, craftsmanship and many hours that go into creating unique Haute Couture garments. Opening in London this weekend, the museum’s largest fashion exhibition since Alexander McQueen: Savage Beauty in 2015 guides you through the evolution of the House of Dior from 1947 to the present day.  Divided into 11 sections – including a new section that explores the designer’s love for British culture – it is a reimagining of the major exhibition Christian Dior: Couturier du Rêve, organised by the Musée des Arts Décoratifs, Paris. 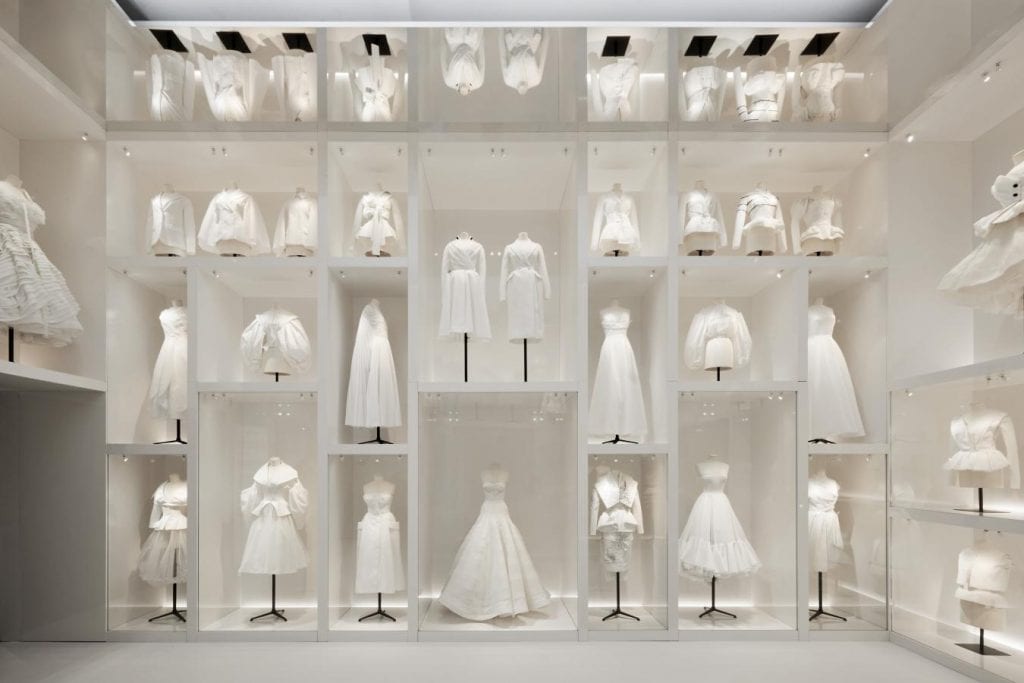 The story of craft and making is at the heart of the exhibition.  As outlined by Dior himself in the quote printed on the wall of the ‘Ateliers’ room, the ateliers are the masters that turn the designer’s vision into reality – and each gown bears the many handprints of the seamstresses, or petites mains, that made them.

The tradition of haute couture demands that garments are painstakingly made by hand, using a mix of traditional and modern techniques. In 1946, when Dior set up his house, he hired three women – Marguerite Carré, Mitzah Bricard and Raymonde Zehnacker – to oversee the process of transforming his designs into finished collections and run the ateliers.  Under their watch, and through a process that remains unchanged today, the ateliers transformed the selected designs into white cotton prototypes (toiles), which allowed the fit, construction and shape to be checked and adjusted. Once approved, the garment would be made in the chosen fabric and embroidery and beading would be commissioned from the artisans and craftspeople of Paris.

The Ateliers room, a highlight of the exhibition, showcases some of the toiles from the Dior Ateliers in a ‘cabinet of curiosity’ style installation, serving as a homage to the talented masters of craft behind the one-off garments on display. 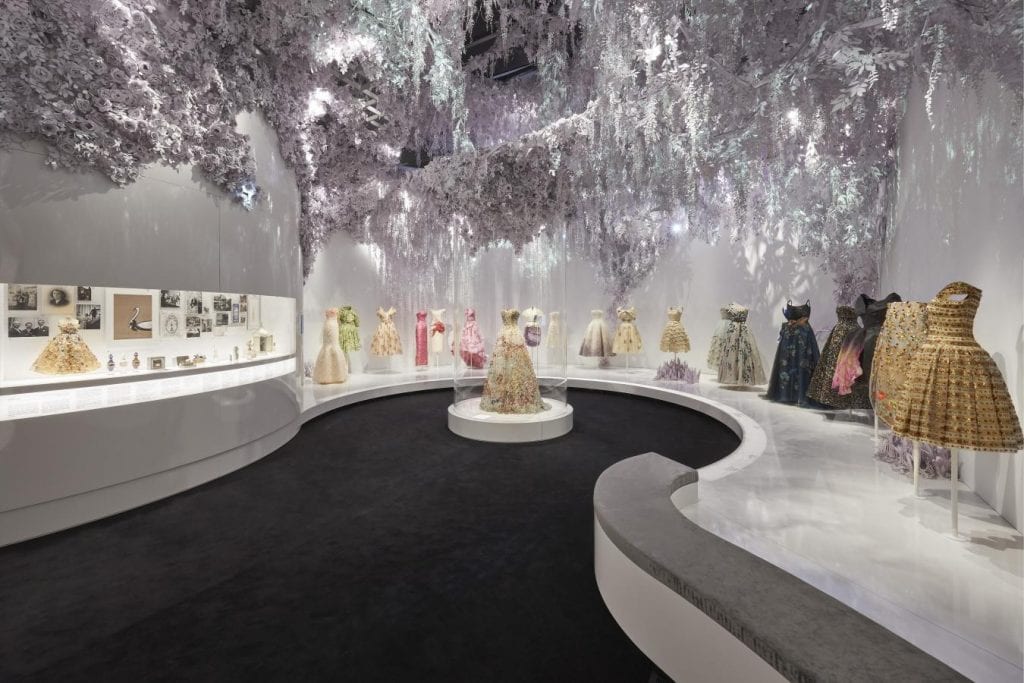 In the next room, ‘Diorama’ examines the breadth of the House of Dior, from accessories including costume jewellery, hats, shoes and bags, to illustrations, archive lipstick and perfume, and minature dresses that have become a signature of Dior.  These miniature dresses are exact replicas of the full scale gowns, showing off the craftsmanship of the ateliers.

Meanwhile, the ‘Ballroom’ celebrates the fantasy of the Ball, evoking the lavish interiors of the great houses of Britain. Showcasing 70 years of stunning formal evening wear, this section reveals the incredible skill of the Haute Couture ateliers. 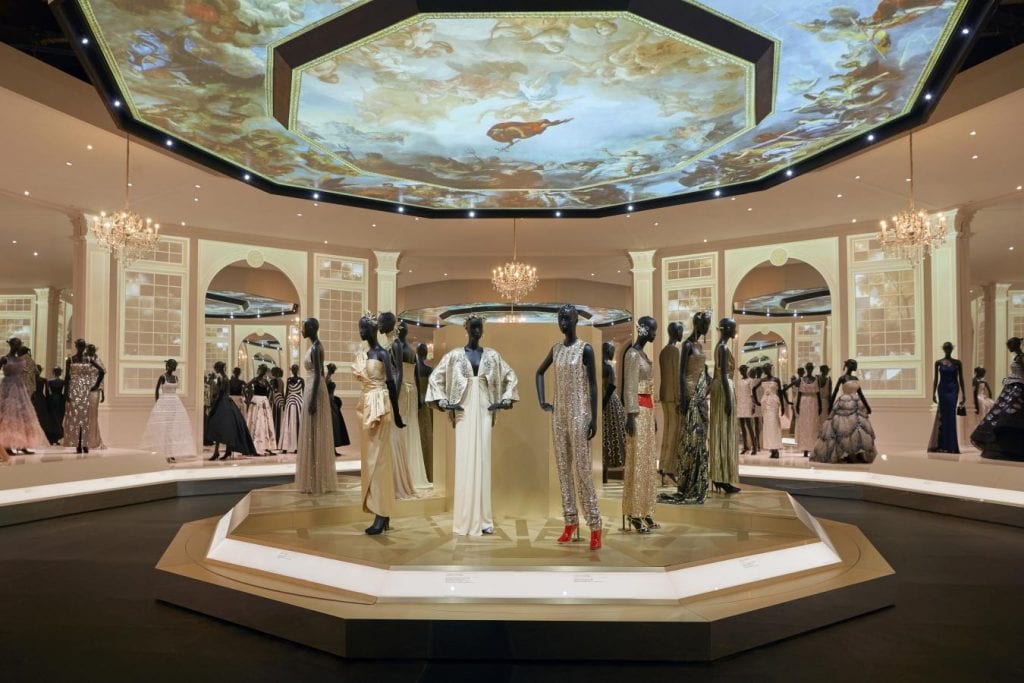 Watch the Handprint of Fashion – a behind the scenes look at the Italian luxury fashion industry.