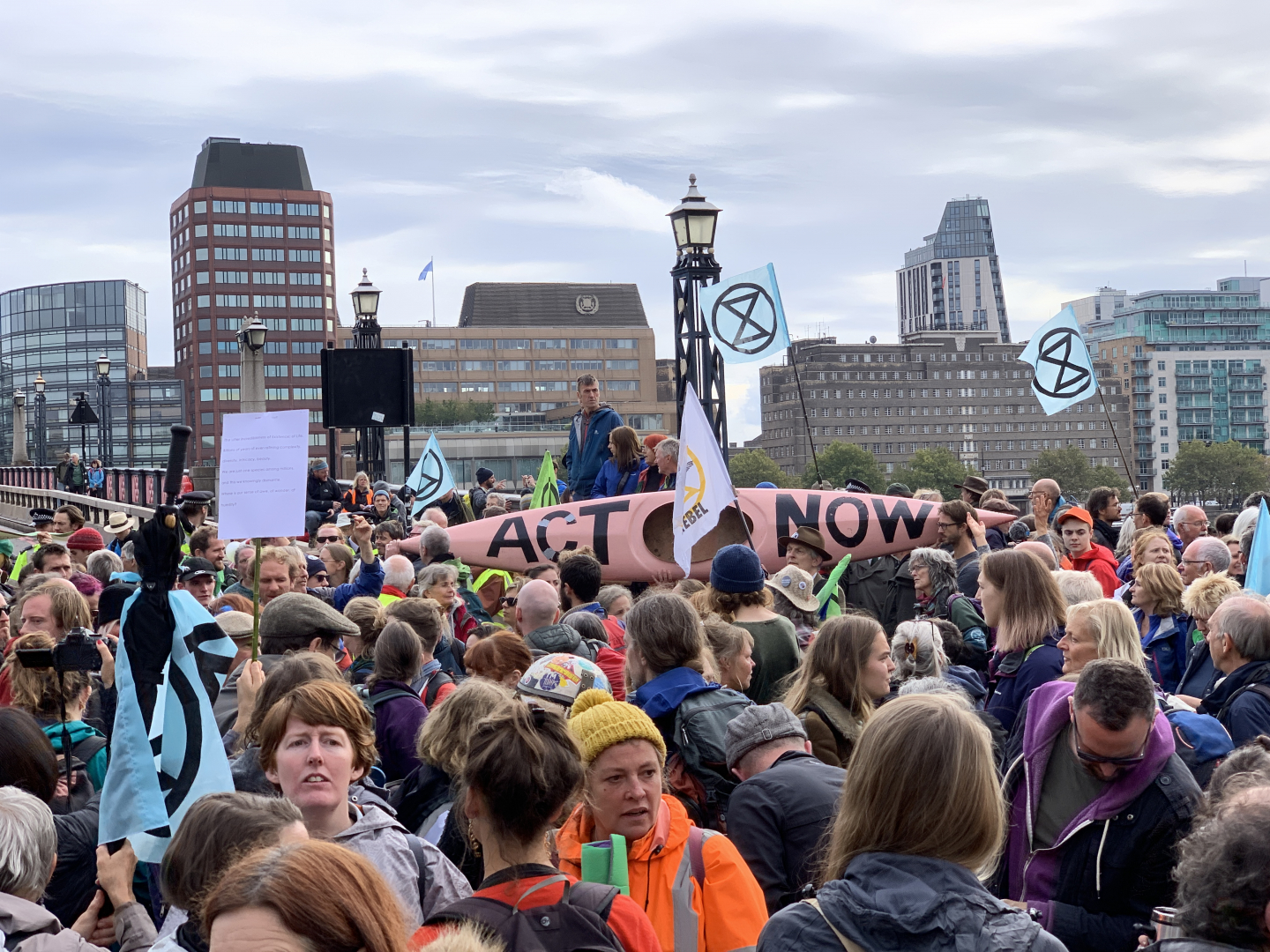 During the first 24 hours of climate protests set to take place over the next fortnight, Extinction Rebellion protesters claimed 11 sites in Westminster. There was love, tears and arrests – find out what’s happened so far.

The International Rebellion has begun. Organised by Extinction Rebellion (XR) and allied movements, protesters are gathering in 60 of the world’s major cities for a fortnight of demonstrations, as part of the continued battle to get the world’s governments to take action on the climate crisis. The Rebellion begins just days after the Global Week of Climate Action, which saw millions of people take to the streets to join climate strikes in major cities across the world and Greta Thunberg give an emotional address at the UN’s Climate Action Summit.

In the first 24 hours of this latest action, demonstrators claimed 11 sites across Westminster with an estimated 200 people camping out overnight before the second day of demonstrations. So far, more than 300 people have been arrested and police have confiscated kitchen equipment and food from protesters, leading protestors calling for donations of essential provisions including hot water and warm clothes. 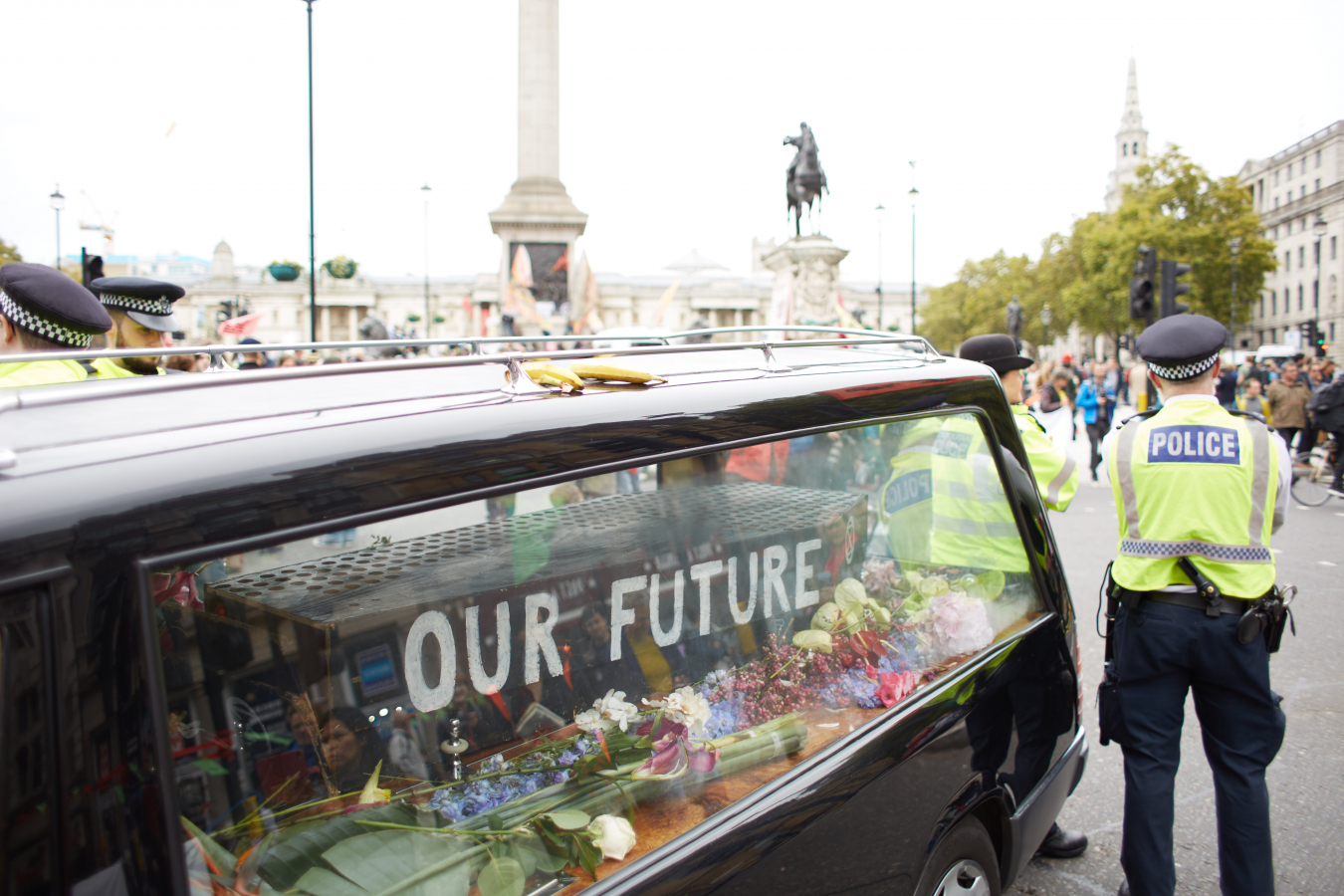 On the first day of the rebellion, XR’s first wedding took place on Westminster Bridge – choirs, a brass band and people’s assemblies also joined the crowds. Elsewhere in London, 500 Animal Rebellion activists staged a sit-in at Smithfield Meat Market and DEFRA, and hundreds of people gathered at Trafalgar Square. Singing protesters were unglued from scaffolding by police, and two people locked themselves inside a hearse carrying a coffin painted ‘Our Future’.

A former Met Police Detective Sergeant supporting Extinction Rebellion at yesterday’s protests said: “I have a three-year old called Natasha. I look at her and I can’t help but wonder what the world will be like in 20 years’ time. Everybody says there’s nothing they wouldn’t do for their children. Well, now is your opportunity.” 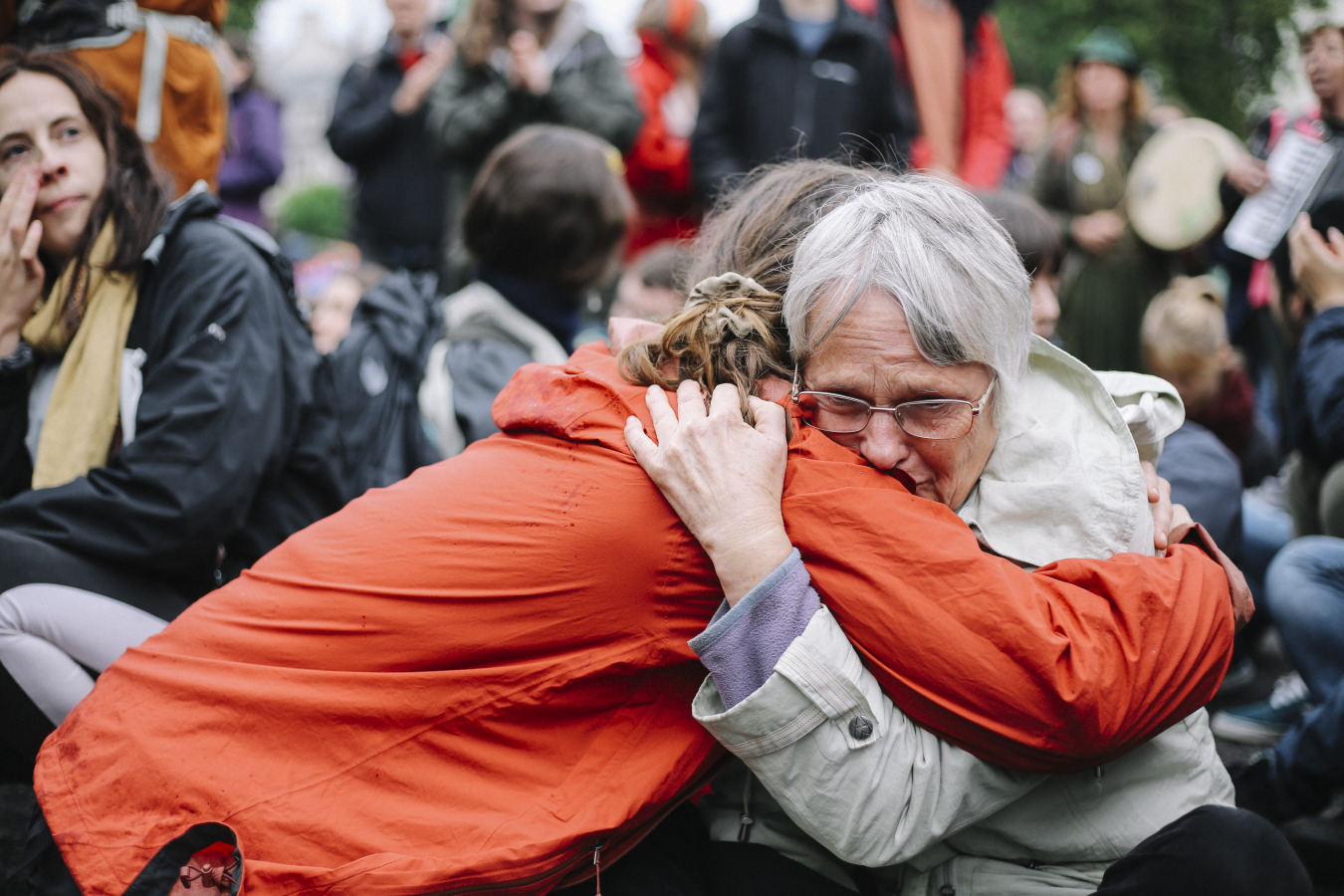 Actor Mark Rylance formed part of the main roadblock on The Mall. “I’m here because I am a part of the human race and a part of all living beings on this planet,” he said; “And I believe we are facing an enormous change, an initiation from a way of life where we are separate and dominating of nature and each other into a new way where we exist together, interconnected, striving in friendship. For me, Extinction Rebellion is a great example of how things could be better.’

This morning, XR convened a parliamentary discussion about the country’s constitutional crisis and the future of democracy. In the six months since Parliament declared that we are in a Climate and Ecological Emergency, the group asked the government – specifically, the Home Office and the Departments for Business, Energy and Industrial Strategy, Transport, and Environment, Food and Rural Affairs – for how it plans to respond.

Zuhura Plummer, a 36-year-old charity worker from Oxford, said: “I don’t want to be doing this, I just want the government to listen to the science and act. This emergency is beyond traditional politics – we want to know what Government Departments are doing to face this climate and ecological emergency. The moment to act is now, not 2050.” 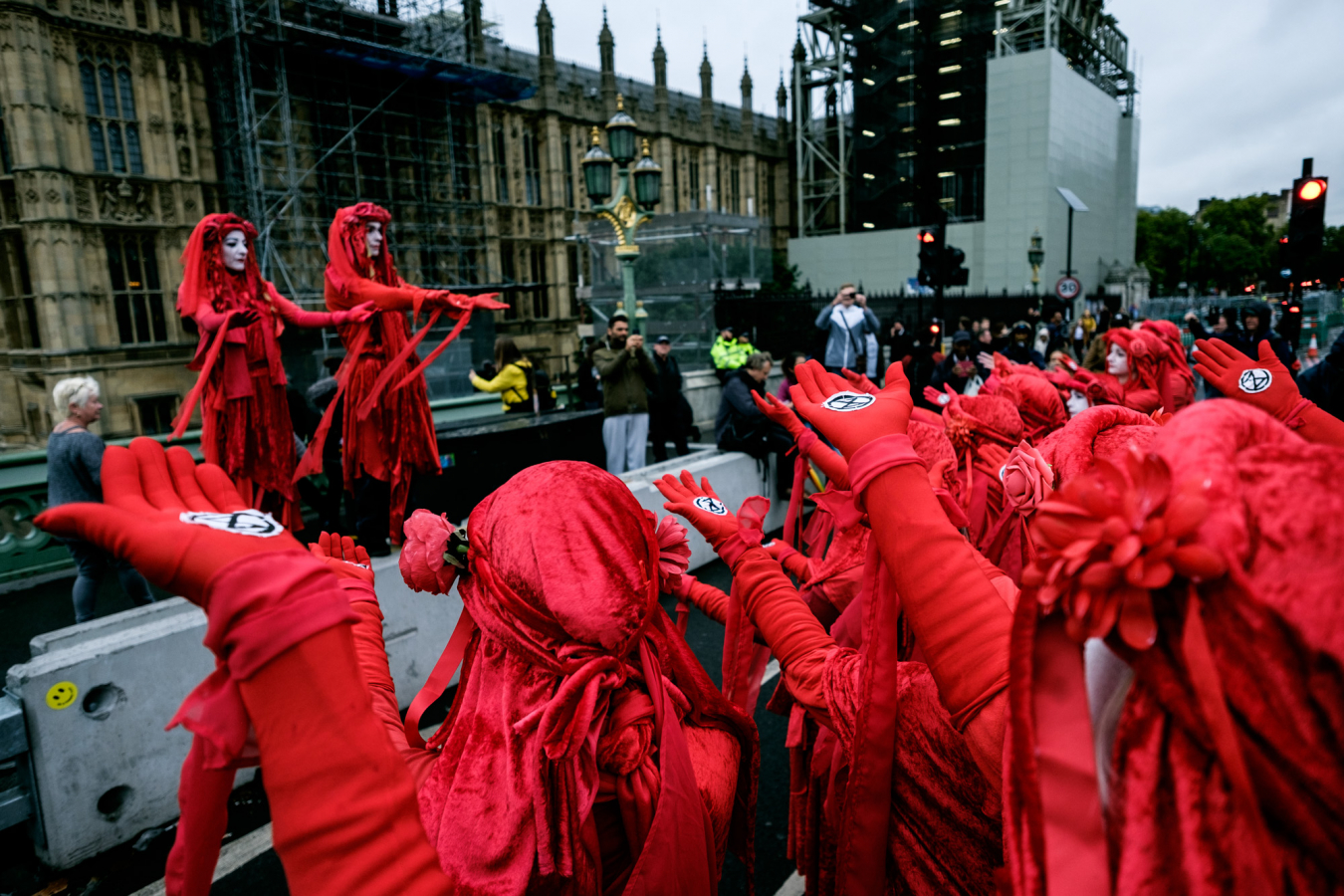 Since noon today, activists have started building a fledgling forest in Old Palace Yard. In July, research showed that 1 trillion trees would need to be planted to absorb the last 10 years’ of carbon emissions. Comprised of 800 potted native trees, the forest will symbolise XR’s call for the government to plant billions of trees in the UK and support the planting of many more globally. MPs will be invited to come and collect trees dedicated to them – Caroline Lucas, Debbie Abranhams and Ed Milliband have already confirmed they will be visiting. 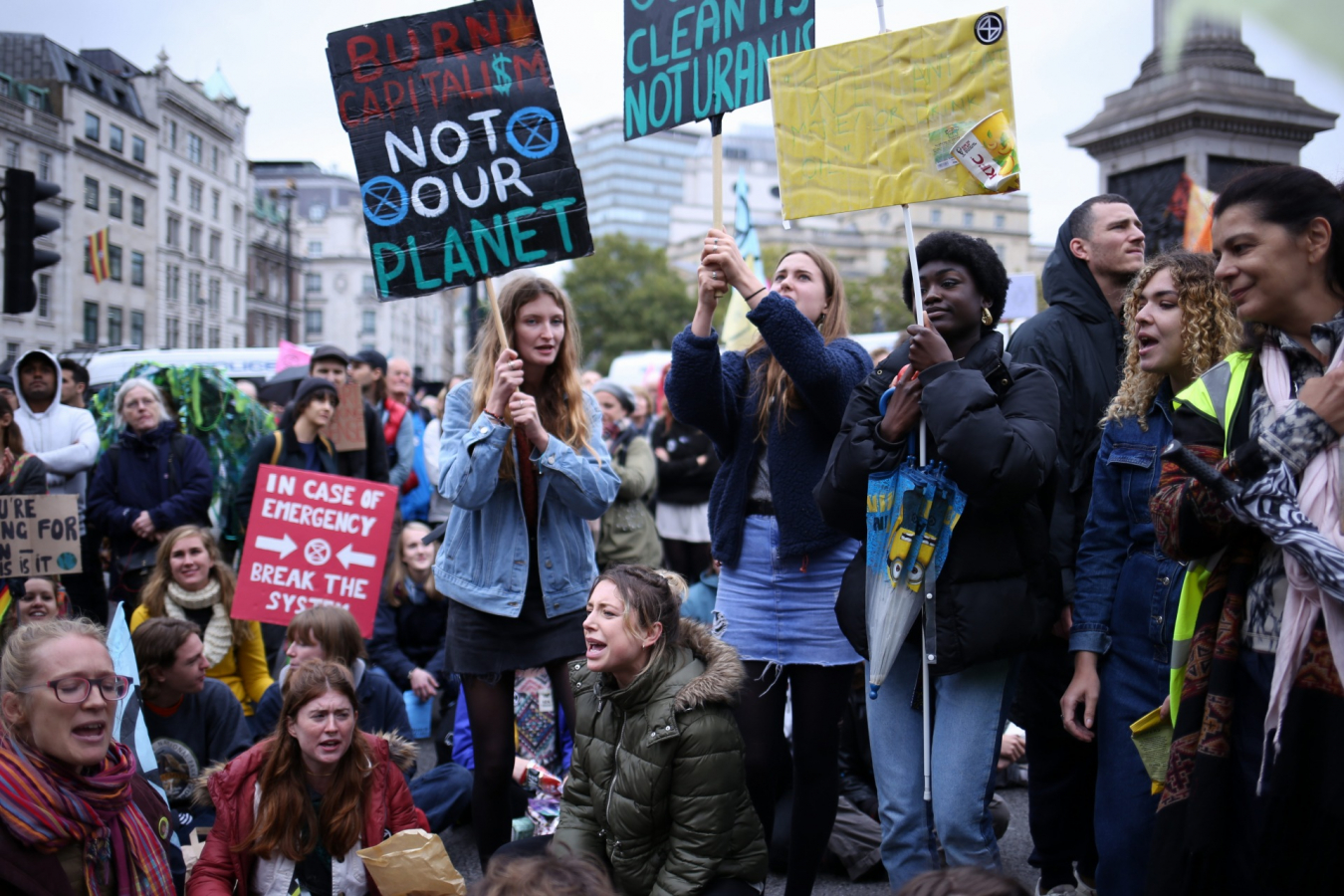 Follow XR on Twitter to keep up to date with the protesters’ progress. To find out how you can get involved, take a look at upcoming events, join the Rebellion Network and find your local group to get involved.

Read our guide to becoming a climate activist.

Find out how young activists are leading the fight against climate change.