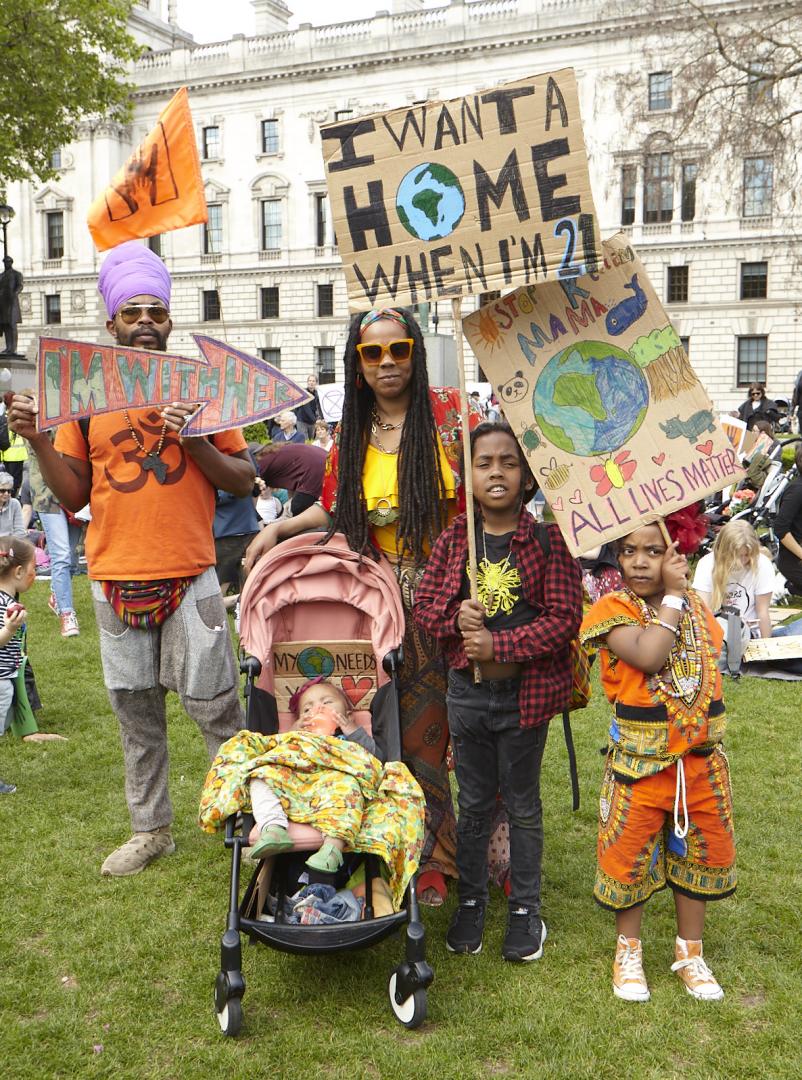 A community project manager, wife and mother of three living in West London, Kiersty has been vegan for nearly 20 years, and is raising her children Zion, Rainbow and Stardust, who range in age from 9 to 1, with the same dietary ethics. Here she shares her Life As I Know It with Fiona McKenzie Johnston.

Growing up, my family was pescatarian from the early 90s, when we made a conscious leap after watching a harrowing documentary on BSE (Mad Cow Disease) and the global mass meat industry. As a teenager I stopped eating fish, becoming fully vegetarian, but was always working towards the utopian idea of eating only plant-based products. I was aware of the way animals are being born, treated as commodities and then killed for food, as well as the effect that producing animal products has on the planet, and people’s health.  To me it felt like being vegan would be aligning myself with the natural order – but it also felt like a big and daunting lifetime commitment. 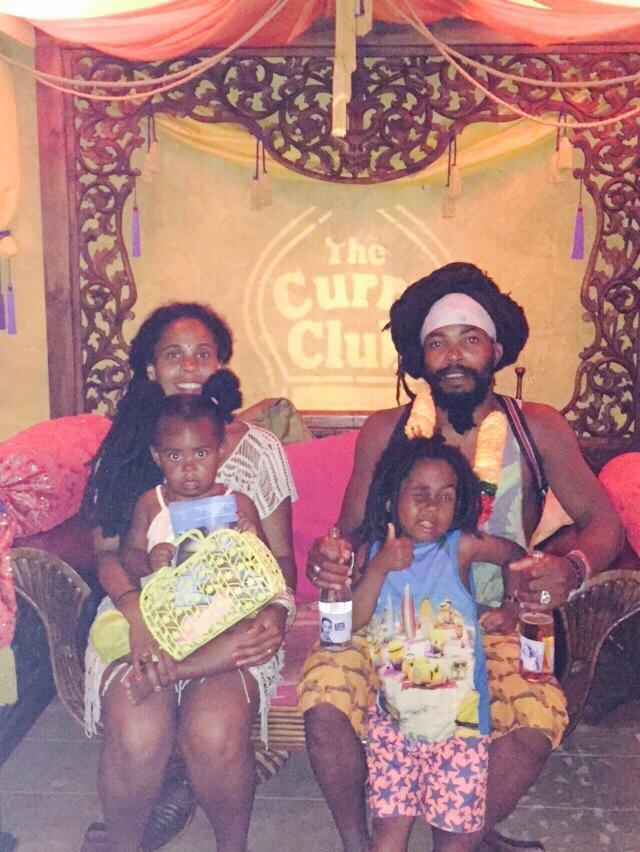 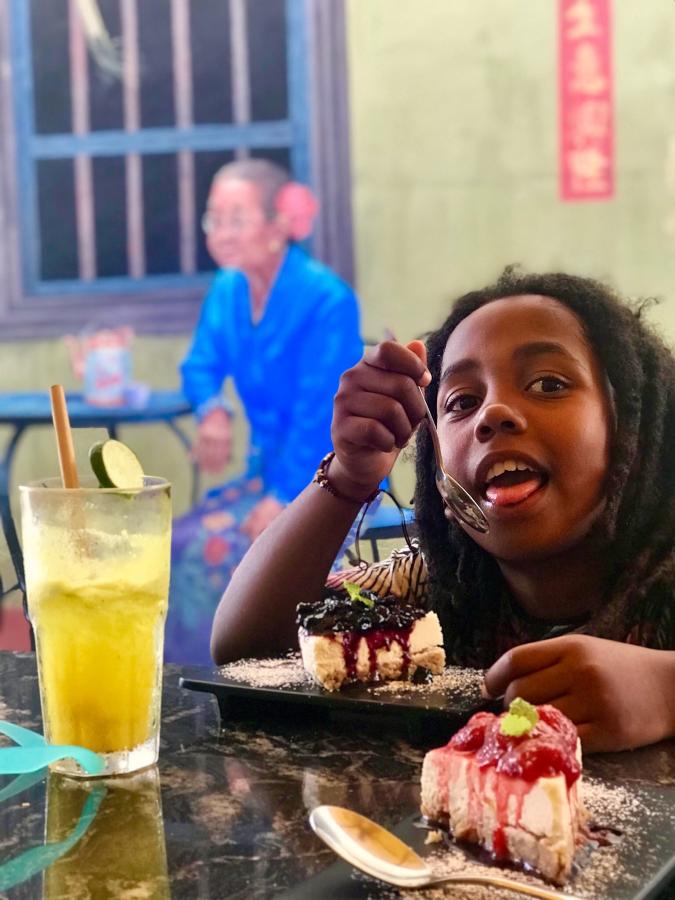 Then in my early 20s I met a fruitarian, who talked to me about the health benefits of his diet, and how he hadn’t been to the doctor for 20 years, and I was so inspired that someone could live ‘the ideal’, particularly in London,  that I felt compelled to look into it and thought I’d try it.  Back then it did seem extreme – I remember family, particularly my grandma – thinking I’d be dead in a few weeks without a cooked meal. I decided that I would start off by trying it for a month and if I felt awful and was wasting away I’d stop – which also made the initial idea of saying bye to chocolate and cheese and all the things I loved easier.  I went purely raw vegan – living off only fruit and raw veg and nuts and seeds – which was actually very easy to do as it was so extreme I knew exactly what I could and couldn’t eat. And I felt really well, my energy levels went up, I felt like I’d detoxified, and overall felt the healthiest I’ve ever been in my life – so that month became about five years.  When I became pregnant with my first child I realised that I wanted more, and so reintroduced such foods as cooked grains and pulses and bread. There were also many more vegan products on the market by then, including soya-based products – although I’ve always tried to limit those.  That was when I first classified myself as ‘vegan’, and that is the diet that our family follow now. 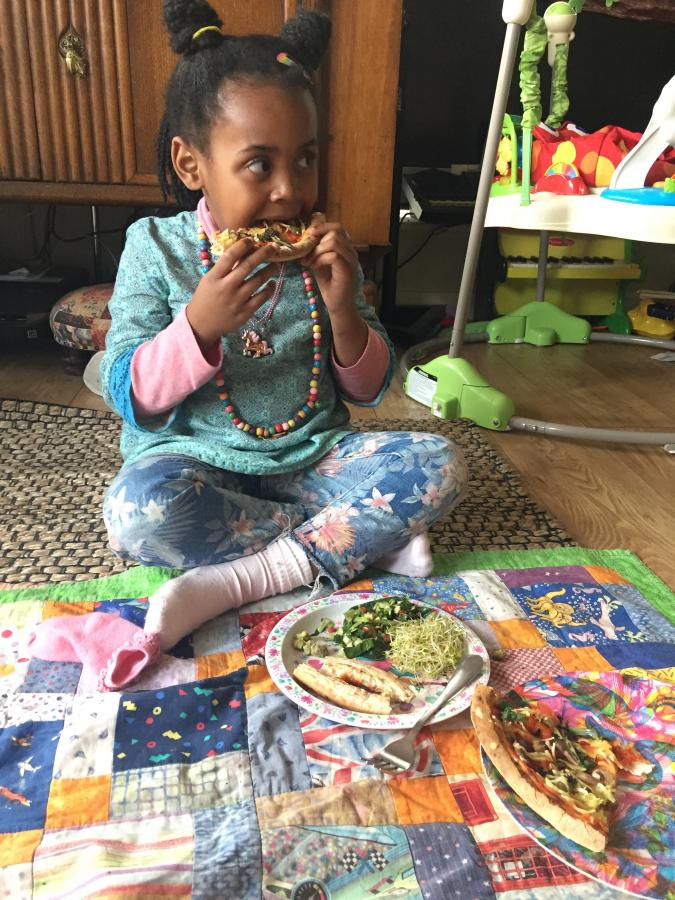 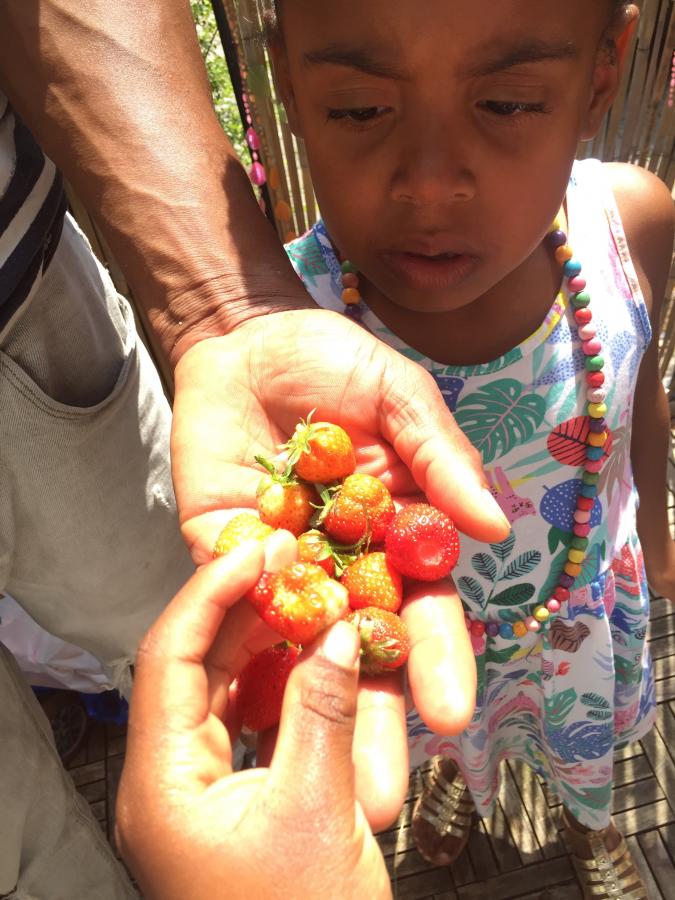 It seemed entirely natural to me that my kids would be vegan too.  But it wasn’t common 10 years ago, and my choices were regularly challenged – by health professionals, and friends and family who were concerned – so I did a lot of research into raising vegan kids. As long as a child’s diet is properly varied, and they’re getting enough fats and protein and energy, a vegan diet is as good as a regular diet, if not better.   The fruits, vegetables and herbs made by our planet are medicinal – and veganism also comes with the added health benefits of a lesser chance of developing certain cancers, and heart disease.  I’ve got several great cookbooks that we use regularly, including Vegan with a Vengeance, LEON Fast Vegan, Vegan Food for the Soul, Farmacy Kitchen Cookbook and Naturally Sweet Vegan Treats.

The children’s favourite dishes include ramen with dumplings, sweet potato falafel and nut burgers with homemade chips. My husband does most of the cooking – as a Rastafarian he strongly believes in the ‘natural’ way of life, or ‘ital livity’ – so we also have lots of wholesome pots, ‘ital’ stews, soups, coconut curries, sprouted lentils, and we stick to wholegrains and live on raw food as much as possible, so salads and smoothies are also a daily staple, which the kids love as much as we do. 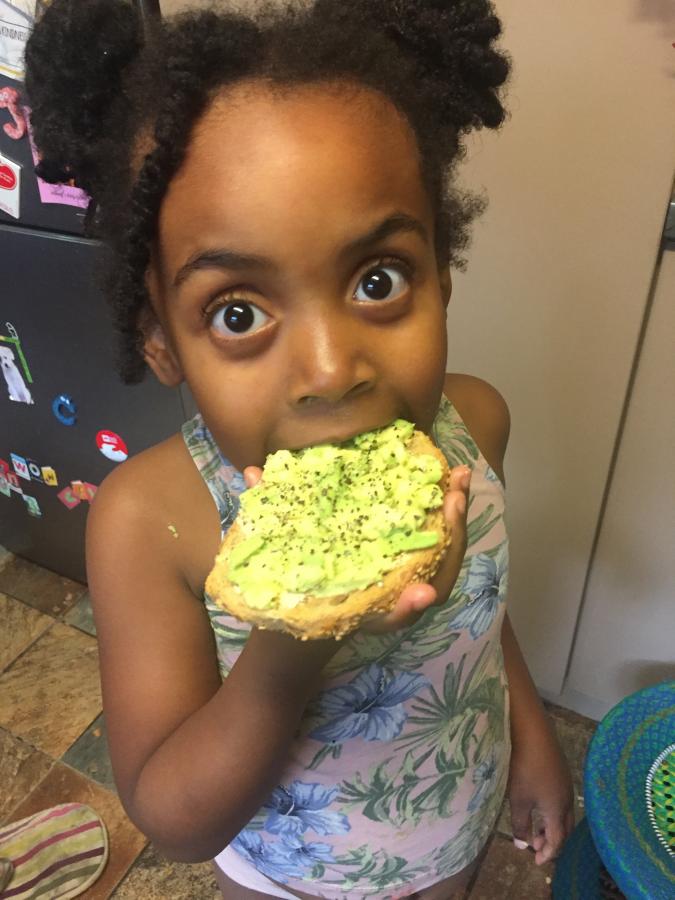 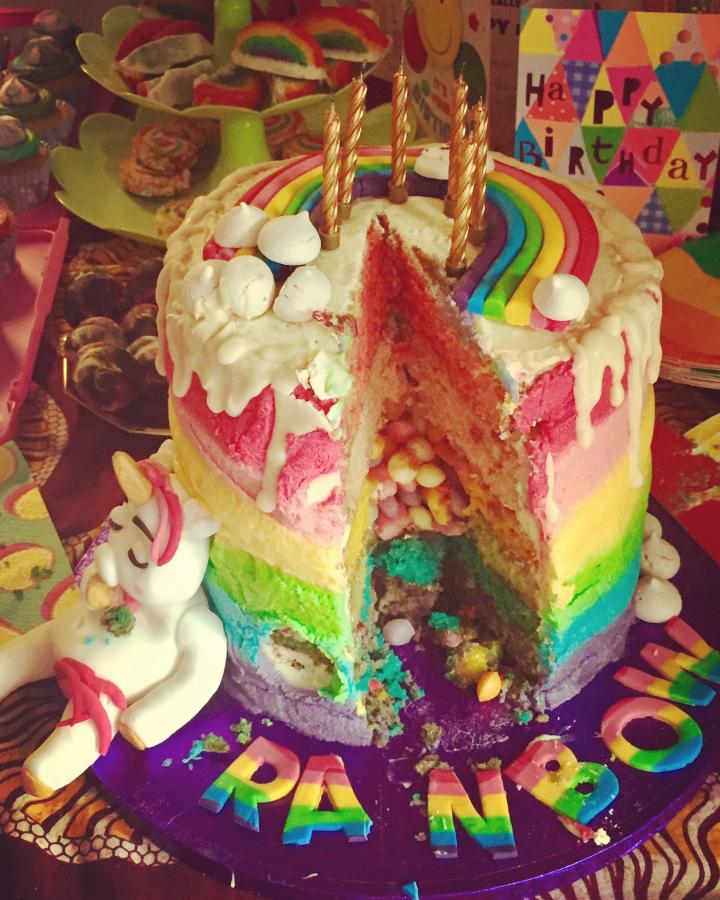 But really it’s about belief in a certain way of life, and this extends to how we source our ingredients. We do our best to use fresh, organic and seasonal, and grow some of our own in our little vegetable patch, as well as making a weekly visit to the Queen’s Park Farmer’s Market.  There we can buy in bulk, which is often more economical, supports local business and we avoid all the excess plastic production and waste.  We love it, as do the children, and it gives them sense of where things are from.  We top up with trips to Planet Organic, Portobello Whole Foods and the newly opened Liberte Cherie – a zero-waste grocery store on the Portobello Road.  At least, that is the aim – there are naturally emergency trips to supermarkets, which have all hugely increased their vegan ranges in recent years: Sainsbury’s even stock my daughter Rainbow’s favourite coconut water ice-cream (SMOOZE) for which I used to have to go to Whole Foods on High Street Kensington.

And eating out has improved too – initially, in the 00s, the hardest element was social situations as there wasn’t much on the menu for me when I went out to dinner with friends.  Now we’re spoilt for choice.  Our favourite family restaurants are Nama, Farmacy, Redemption and The Grain Store which are all in Notting Hill, Comptoir V in Kensal Green, and Rainforest Creations who sell their street food at various markets. The kids’ top spots are CookDaily in Hackney, Purezza in Camden and Wagamama, Franco Manca and Itsu which all have great vegan menus. 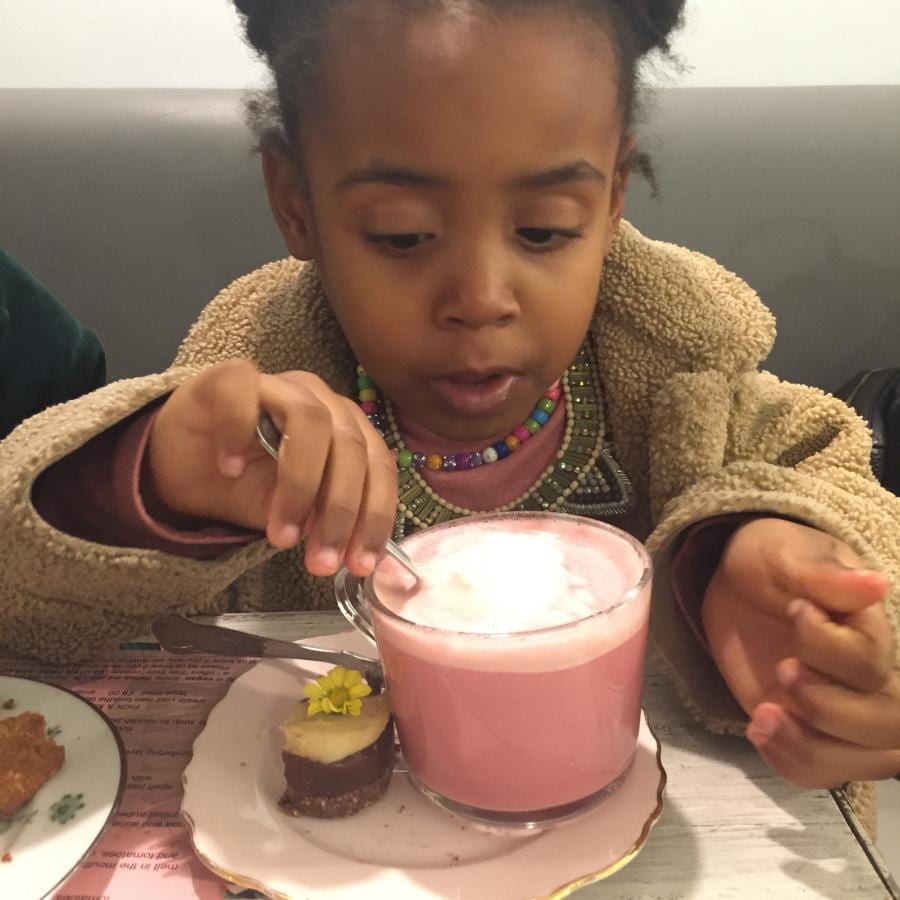 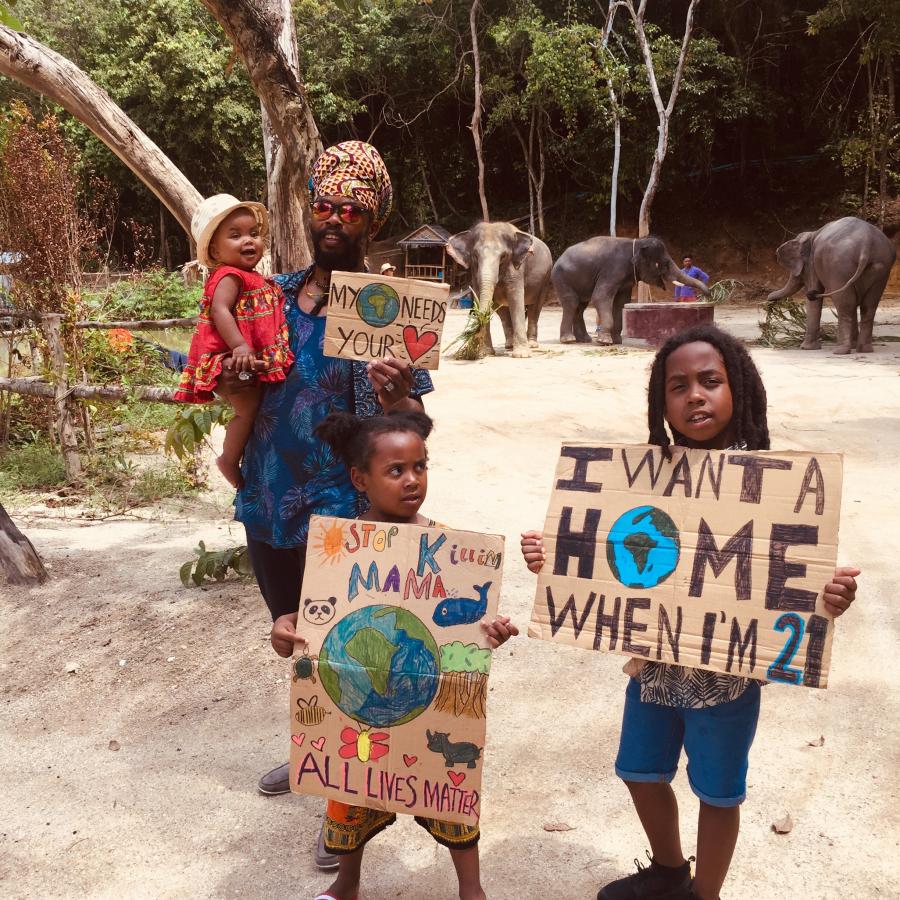 The children love being vegan.  It’s always been a big part of their identity, and our family identity as a whole.  Even at nursery they were quick to identify what they could and couldn’t eat; they consider themselves ‘animal protectors’.  Zion, who at nine is the oldest and is naturally inquisitive, is now questioning it more and is curious about things his friends have eaten that he’s never tried, but he is still really strong in his belief.  We have tried to instil the recognition that ‘all lives matter’.  It is also helpful that so much awareness has grown around veganism so they feel proud to be setting an example, they want to respect the planet and be conscious earthlings.

And they don’t miss out, either on school lunches (there’s a vegan option every day at our state primary school) or at children’s parties, for the range of vegan ‘treats’ has grown hugely in the last five years: vegan pizza is readily available, and Oreos and Party Rings actually fulfil vegan criteria (though we try not to have those too often!) 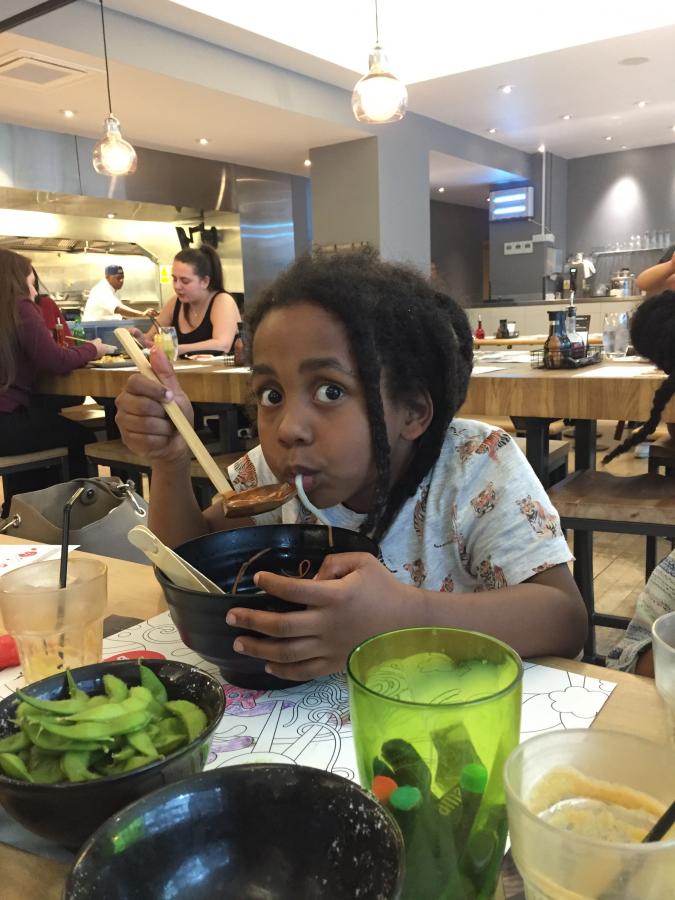 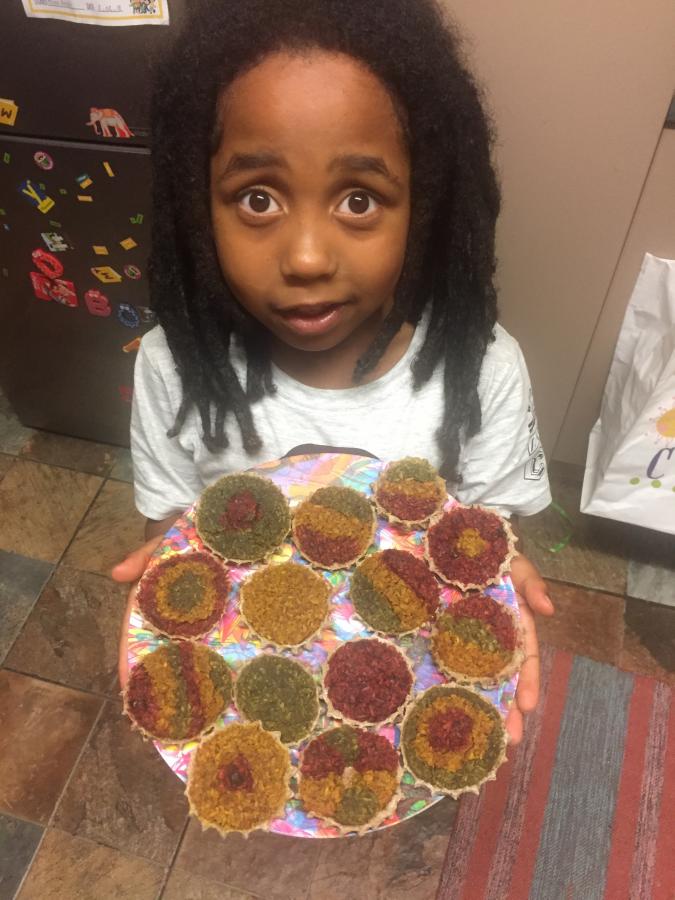 While we’ve never tried to convert anyone – I believe in diversity of opinion and respecting people’s own way of life – through our example, and in cooking for our non-vegan guests, hosting parties and sharing food, we have seen an increase in our friends using vegan recipes and transitioning to veganism themselves, which is totally heart-warming.  I know that I’ll always be vegan, and I think that the children will too, though of course they’re completely free to make their own choices when they’re older, and I’ll support them in whatever they decide.  But it’s genuinely much easier than people think, and every little bit of effort and love shown towards our planet helps.  This is how our family does it.

As told to Fiona McKenzie Johnston

Read more inspiring stories from our ‘Life as I know it‘ series.

Learn more about the benefits of a plant-based diet and 5 simple vegan substitutes for your cooking.

Discover our favourite vegan restaurants and fast-food eateries in London.

Wellbeing In Winter: Embracing the Darkness
An Afternoon of Slow Cooking with Stanley Tucci
Wellbeing in Winter: How To Make the Most of Your Lunch Break
What To Eat In Spring
Lifestyle