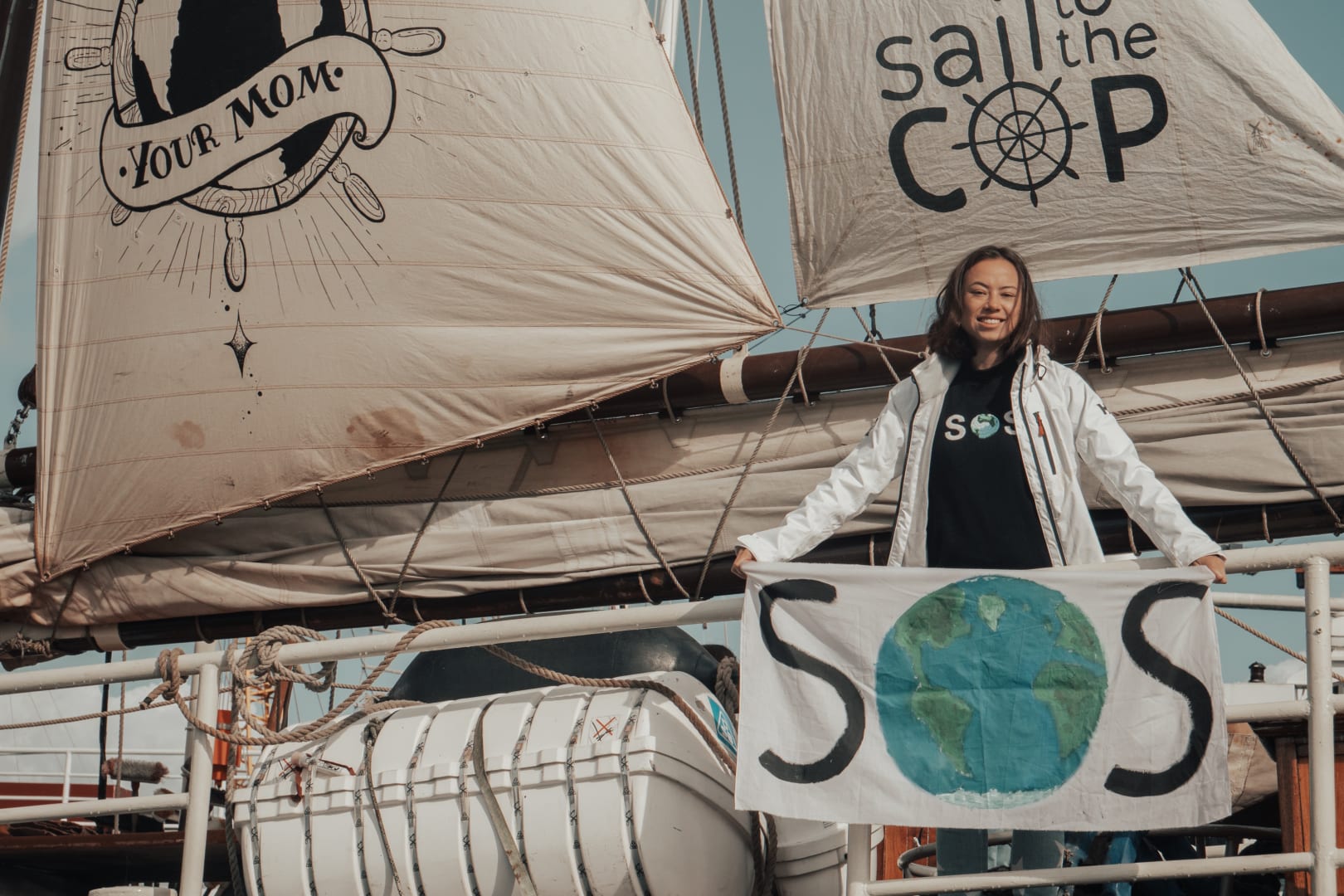 Life As I Know It: Sail for Climate Action’s Tori Tsui

Since her appearance in Stella McCartney’s FW19 campaign, activist Tori Tsui has dedicated her career to raising awareness about the climate conversation and making sure all voices are fairly represented. In the latest of our ‘Life as I know it‘ series, she tells us about her new Sail For Climate Action project which is taking Latin American, Indigenous and Caribbean youth to the UN Climate Conference in Bonn, Germany.

I was a pretty voracious young woman. I’m 26 now and while that’s older than your average ‘young’ climate activist, I can remember being 15 and obsessing tirelessly with what I could do to lower my impact on the environment. I grew up in Hong Kong, which is renowned for being a cosmopolitan, bustling city. But Hong Kong is also lush, green and ecologically vibrant, and it’s safe to say this laid the groundwork for my appreciation for nature. Coupled with learning about the impact of fossil fuels and animal agriculture set off a change of events that’s led me to being where I am now: half-way across the other side of the world in Colombia, facilitating a project called Sail For Climate Action that’s taking 30 Latin American, Indigenous, Caribbean and European youth to the UN Climate Conference in Germany by sailboat.

There’s obviously a story in-between. After leaving Hong Kong, I moved to England to read for a research degree in Ecology and Conservation. The natural trajectory for this was a PhD but after much consideration, I turned down academia for another life. I wanted to be a conscious communicator, which segued neatly into an appreciation for wildlife photography and filmmaking. A year later, I found myself in Bristol, hoping to establish myself in the natural history documentary industry.

It’s safe to say I became disillusioned. In October 2018, Extinction Rebellion staged its first major protest in London; an act of civil disobedience as a result of the government’s negligence on the climate crisis. I had found my niche. And from that point onwards, I was less enamoured by the idea of beautiful wildlife imagery. I was determined to tell the truth and the truth wasn’t always pretty. 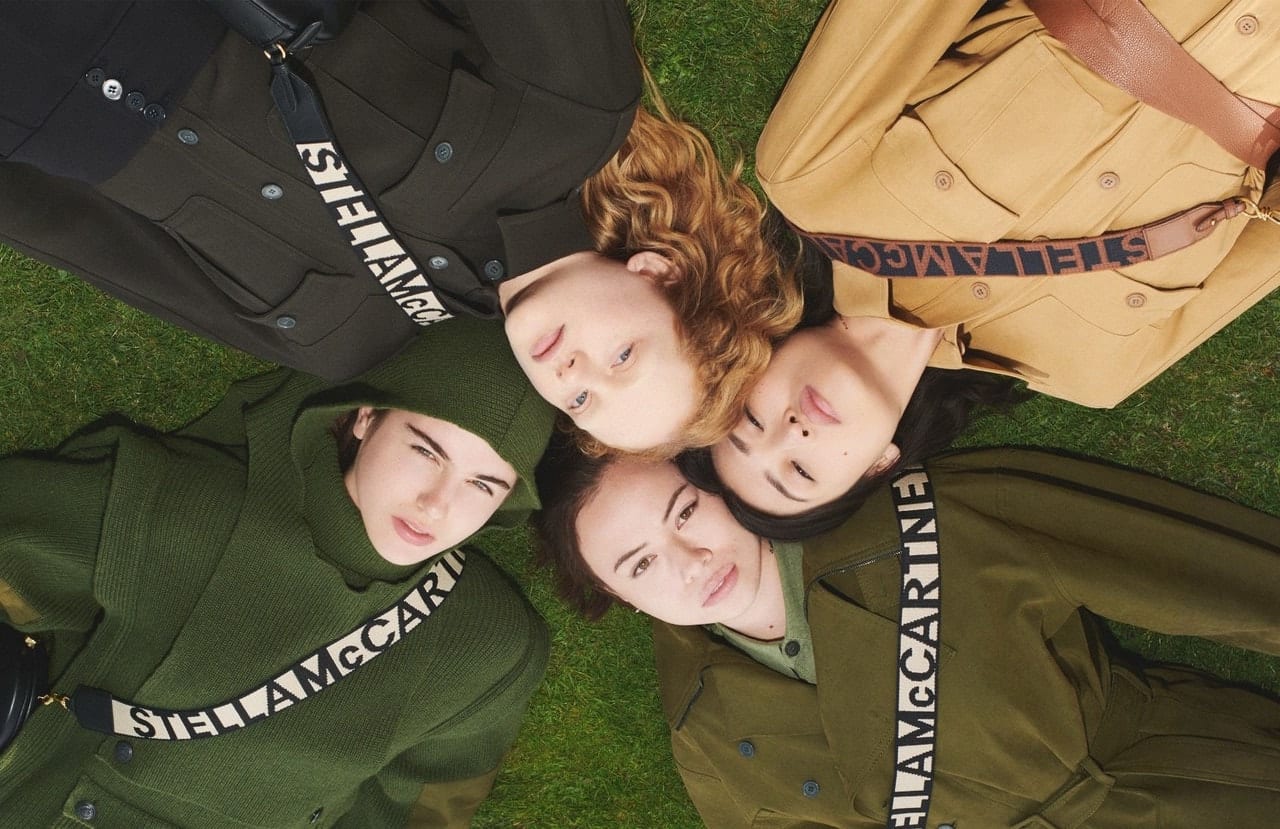 Nearly six months later I made some shorts for the Extinction Rebellion social media channel on the impact of the climate crisis on certain species. Within a few days I had a message from the creative director of Stella McCartney asking me if I wanted to be part of a campaign. Then at the April 2019 rebellion in London, I was approached by two women from Stella’s team. They took photos, asked me about my involvement with climate activism and the next day I was on a bus to Wales for a project that would change my life.

I had no idea what the campaign entailed but when I found myself in amongst other rebels and the imitable Amber Valetta, I soon learned that Stella had chosen Extinction Rebellion activists to model her winter line. What resulted was a visual ode to our planet in the form of a film written by author and environmentalist Jonathan Safran Foer and narrated by primatologist and philanthropist Dame Jane Goodall.

The media attention ensued; articles by Vogue, podcasts, interviews and another environmental campaign on plastics with British photographer Mollie Rose. Even a scathing article written about my falsified flying habits by the Daily Mail and an invitation to the BP sponsored British Portrait awards (which I turned down, I have no time for fossil fuels). 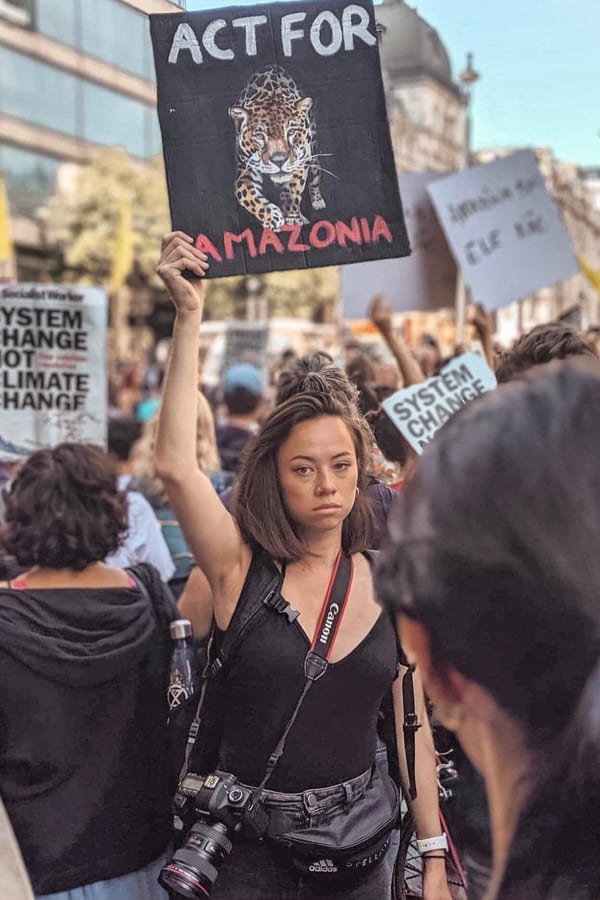 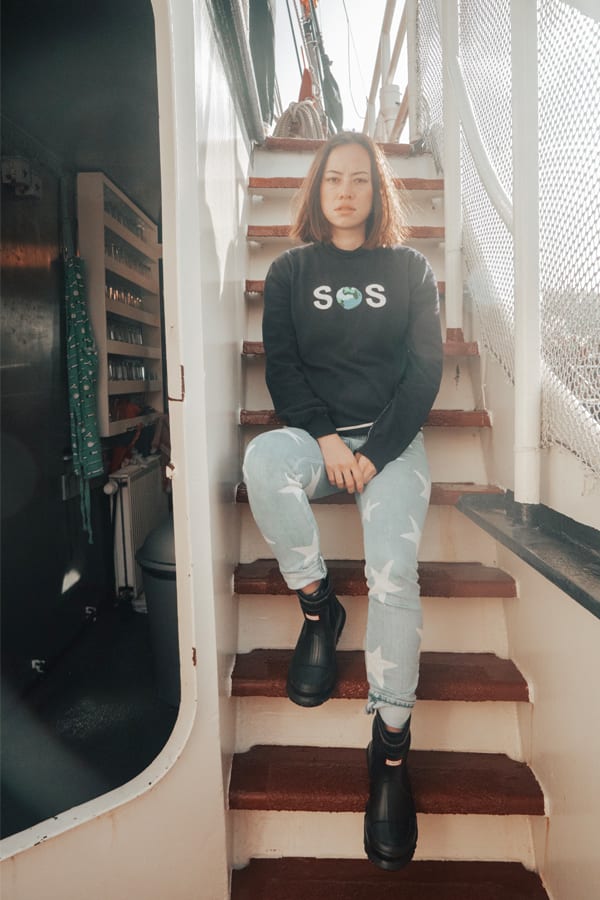 My relationship with Stella didn’t end there however. She subsequently sponsored me to sail across the Atlantic Ocean with an initiative called Sail To The COP; a think tank and project taking 36 Europeans to the UN Climate Conference COP25 in Santiago, Chile. At first glance, a sailing trip may conjure up imagery of courageous grandeur, romanticism and epic bravery. And by all means, living on a sail boat for three months was brimming with the aforementioned tropes. But it was also a labour of love; heartbreak and frustration. The COP25 was relocated to Madrid due to civil unrest in Chile, and our beautiful team found out half-way across the Atlantic. The result? We sailed onwards to the island of Martinique in the Caribbean and worked remotely at the COP25 with our group of representatives to call for fair and sustainable travel. Afterwards, we reached our final destination, Cartagena in Colombia.

It’s safe to say the COP25 cancellation left many of us feeling purposeless and disheartened. I’m sure the cancellation was a huge disappointment for the Stella team. In a weird sense, I had felt like I let myself down, and the many people rooting for me. Although I know we still had a fantastic output and truly made an impact at the COP with our representatives, I couldn’t help but want to fill the gaping void left by the cancellation.

And that’s how Sail For Climate Action was born.

The last two months in Cartagena have been a whirlwind. From obtaining diverse participants for the programme, to learning the ropes (no pun intended) of how to fundraise and coordinate communications for a sailing project, to even landing myself on a panel in the international Hay Festival on the trials and tribulations of climate change. Cartagena has shaped and moulded me into a fortified version of everything I had wanted to achieve. 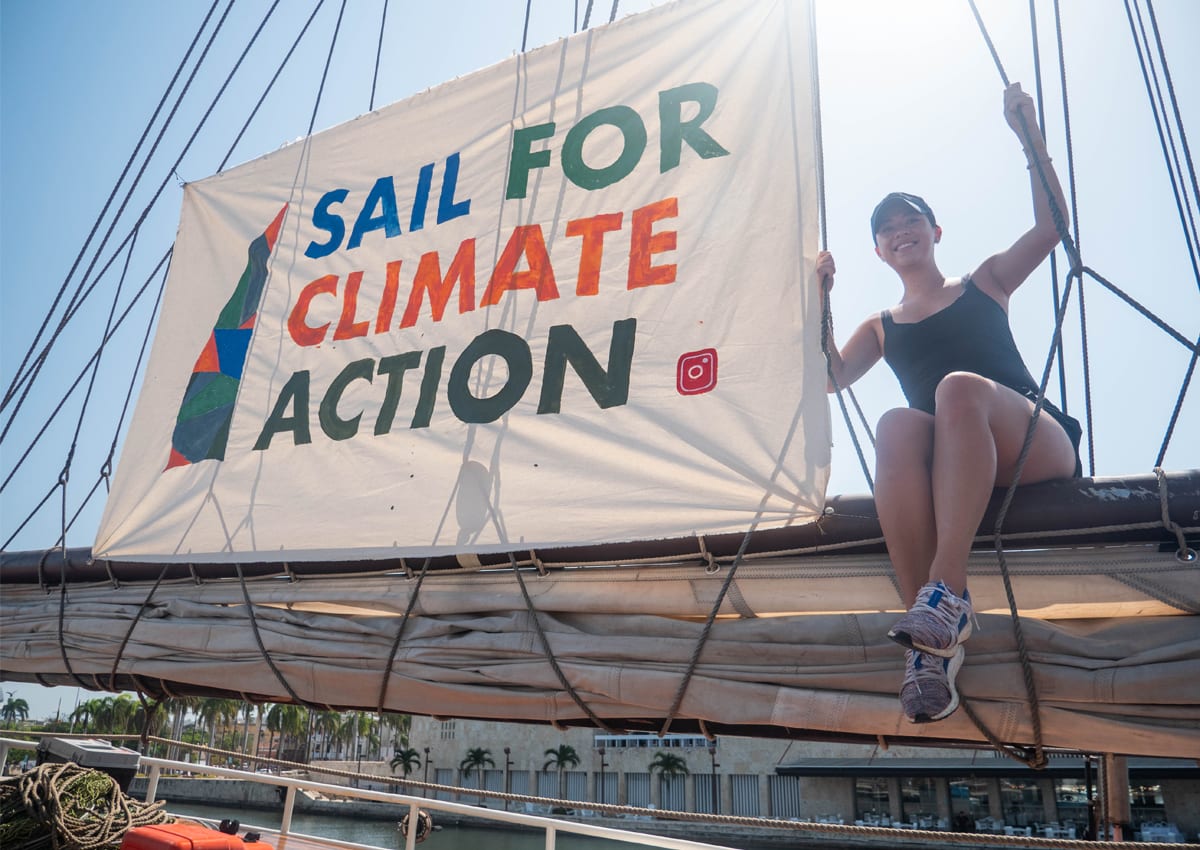 It’s February 23rd and our sail boat has departed. I chose not to venture with the activists. I am facilitating the communications and organising the logistics of our European tour. Because as if sailing across the Atlantic isn’t enough, we also have a month and a half long programme around Europe where our Latin American, Indigenous and Caribbean participants will meet delegations, organisations, youth movements and politicians to tell their stories. The climate movement is largely dominated by faces of the global north. And it is voices of the global south who not only hold many of the answers to mitigating the climate crisis, but also these voices will be hit hardest and have done the least amount of damage to our beautiful planet. Plus, there is more to climate activism than Greta Thunberg (even if she is great).

While my voice as a climate activist has been gracefully amplified over the past year, I want to take the time to allow the youth whose voices are truly invaluable in times of crisis to be heard. By not sailing, I am hoping that I can facilitate their voices and visions in a way that they see fit. And it’s safe to say, this group of young activists has inspired and impacted my life more than I can ever express gratitude for.

Come June at the end of the UN conference, I’ll be headfirst into another COP campaign, taking youth to the COP26 in Glasgow by train, of course working voluntarily and living off the ever-depleting credit in my bank account. But why? Activist movements like these are opportunities to galvanise momentum in such a time-sensitive era. I see this as a push to the finish line. With the ticking time bomb that is the climate crisis, I have no choice but to dedicate my life and energy to a cause which determines how we inhabit our home.

Discover more from our ‘Life As I Know It’ series.

Find out if we can still meet the UN Sustainable Development Goals for 2030.

Discover what happened when the first UK city declared a climate emergency.