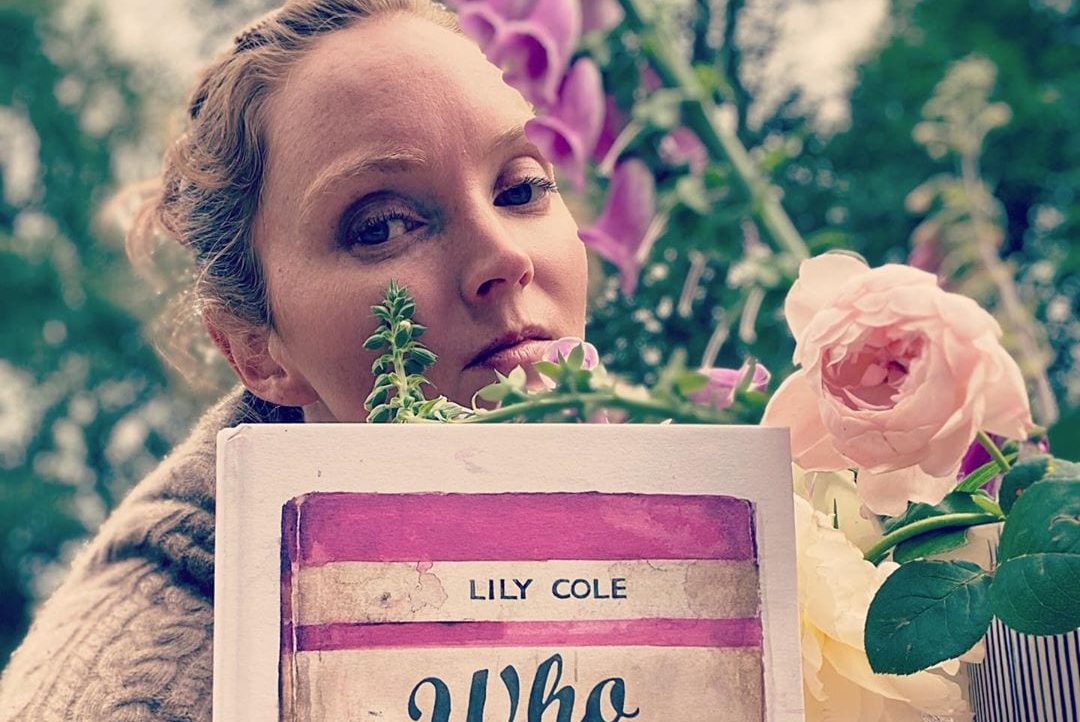 Lily Cole’s ‘Who Cares Wins,’: A Journey from Tech-Utopia to Indigenous Wisdom

‘Who Cares Wins’ combines the opinions and worldviews of a diverse range of sustainability thought leaders, from Sir David Attenborough to Putanny Luiza, the first female shaman of the Yawanawa indigenous tribe. Hattie Bottom speaks to author Lily Cole about the philosophy behind the book, and why we should all “listen deeply, and choose optimism.”

When I ask if she describes herself as an activist, she explains “I’m quite wary of labels in general, I mean my Instagram bio right now is ‘human being’.” After signing a petition letter from youth activist Greta Thunberg to the EU, she tells me how an organiser asked her how she wanted to be described. Cole confesses “I always get so uncomfortable and never know what to choose. I just wanted to put ‘human being’… I feel quite happy with that one.” There is an assumption, a sexist one, that models-turned-actresses shouldn’t be taken seriously. I wonder if her humility is a case of imposter syndrome, or an act of defiance.

Her newly released book ‘Who Cares Wins,’ is as elusive as Cole herself, refusing to fall into a pre-defined genre or category. Searching for ways to reverse the climate crisis and Sixth Mass Extinction, she has spoken to a comprehensive network of experts from across the globe to scrapbook their wide and varied environmental and societal solutions. Among the book’s diverse range of interviewees are Sir David Attenborough, Putanny Luiza, the first female shaman of the Yawanawa indigenous tribe; entrepreneurs Elon Musk and Stella McCartney, activists Farhana Yamin and Extinction Rebellion co-founder Dr Gail Bradbrook.

Wondering how one book can profess so many points of view? Well, that’s what makes it so profound and refreshing. In our increasingly polarised and partisan world, it’s rare to read a piece of non-fiction without a fiercely won conclusion. Like a bag of pick ‘n mix, ‘Who Cares Wins’ is a medley of disparate ideas, stories and ambitions: space travel, communes, rewilding, fairtrade toasters and cities made from carbon capture diamonds.

The principle is not dissimilar from Project Drawdown: known as ‘the most comprehensive plan ever proposed to reverse global warming’ while avoiding the pitfalls of becoming a textbook. Project Drawdown is an encyclopedic list of environmental solutions, ranked by the gigatons of CO2 they can reduce; likely written for executives, not individuals. Whereas ‘Who Cares Wins’ is a story book and manifesto, littered with breathtaking language and personal anecdotes. In one passage, Cole refers to a childhood project of hers on the Ozone as “a yawn in the sky”.

Don’t get me wrong, ‘Who Cares Wins’ isn’t an easy read. It requires ample regimen and focus. Even as a Philosophy graduate, some of the conceptual and philosophical debates on quantum and parallel realities are inaccessible. But the book’s compass, and the concept for Cole’s podcast series, is an analogy about Wizards and Prophets (borrowed from Charles Mann). It’s used to compare the divergent thinkers she interviews and really helps to simplify some of the complex debates.

In the book, Cole explains that “Greta Thunberg and Elon Musk are emblematic of the diverse spectrum of philosophical positions when it comes to thinking about the environment: do we need to think down (to Earth) or look up (to the stars)? A Prophet insists on behaviour change that is grounded and humble; a Wizard insists on innovation that is pragmatic and ambitious. We likely require both.”

I didn’t immediately understand why she refers to Elon and the Wizards in her book as ‘practical,’ when Elon’s ideas include colonising Mars and colossal geoengineering. But now I can see that there’s often a spirituality to the Prophets that contrasts to the religion of science that many of the Wizards, like Elon Musk and Pat Brown (Chief Executive at Impossible Foods), subscribe to. When forced to pick sides, Cole admits to me that the philosophy of Prophets “resonates more.” She says that what we can learn from indigenous communities “feels truthful and powerful and right… It feels it feels foolproof because indigenous communities and gatherer-hunter societies have existed for hundreds of thousands of years on this planet, without environmental peril. I think my hope, maybe in a naive way, would be that we could combine all of the technological advances we’ve developed the last few hundred years, with a more indigenous worldview and an older way of seeing the world.”

Originally, Penguin asked Cole to write a book on the gift economy, based on her experiences with Impossible People – a social platform she co-founded in 2013, using principles of altruism and the gift economy, dubbed the ‘Tinder for favours.’ This now features as one chapter out of fourteen, reflective of the way Cole’s outlook has become more nuanced since her days of being a self-confessed ‘tech-utopian’.

Impossible People was a money-free ‘social giving’ platform that granted wishes and offered advice, services and material goods: an online community that could support one another even in an economic crisis (there’s evidence to suggest that the gift economy, if it had a monetary value placed on it, would generate more than the UK’s GDP). While the platform won her the support of Muhammad Yunus (Nobel Laureate for micro-finance and Social Business) and an Honorary Doctor of Letters from Glasgow Caledonian University, it has since been deactivated, and she confesses that she can’t face investing any more time in the project.

I ask Cole if any of the big social networks can, and should, progress her vision for Impossible People? “I think it’d be wonderful if we had new social networks that were designed in a much more mindful way, thinking about the kind of communities and cultures we want, which the gift economy and acts of kindness could play a part of. I think there are some examples of that happening a little bit on Facebook local groups and just in serendipitous ways that people connect [online], but obviously the big social networks are not designed for that purpose.”

Our conversation takes a turn as Cole is vindicated by the recent Netflix exposé ‘The Social Dilemma.’ It appears to explain many of the frustrations she experienced working four years full time on Impossible People. “The social networks are designed to be addictive. And then you also have the fact that advertising is tailored towards our biases in politics and is genuinely starting to impact our democracy and our ability to have free and fair elections. That’s the part that really worries me.”

“I think the massive social media companies have been so apathetic in dealing with these issues, which have been very clear for the last few years, particularly since 2016. You couldn’t try and fit a gift economy sharing platform into that structure because they’re just incompatible. It’s like you’re doing something bad on one hand and good on the other hand. I’m more hopeful about localised grassroots ways of thinking about community.”

Having firmly stepped away from the Impossible People social network and finished her book, Cole is now channeling her energy on a more creative project, Wires Glasses. A zero-waste business that is “putting into practice” all of the ideas she writes about in her book. The glasses are crafted with bio-plastic made from castor beans and a single wire handcrafted in Italy.

“It’s been a good test-case. You really learn how hard it is, to try and make something in a positive way and to try and look at every step in the supply chain and think in a very holistic way about the impact.”

Reflecting on the difficulties of making sustainable fashion that’s deemed ‘accessible’, Cole explains that “we’ve had a fake idea of how much things cost by not pricing for pollution in the production processes. By exporting labor to low income countries and exploiting the wage gap between countries. These are systemic structures that enable us to have a false idea of the cost of goods. How do we change our attitude to buying stuff, to accommodate that new reality, that if things are made well, they have a higher value, but they also last a lot longer? It’s about buying less but buying better which I know is Livia’s maxim. Wires is taking the theory and making it practical.” 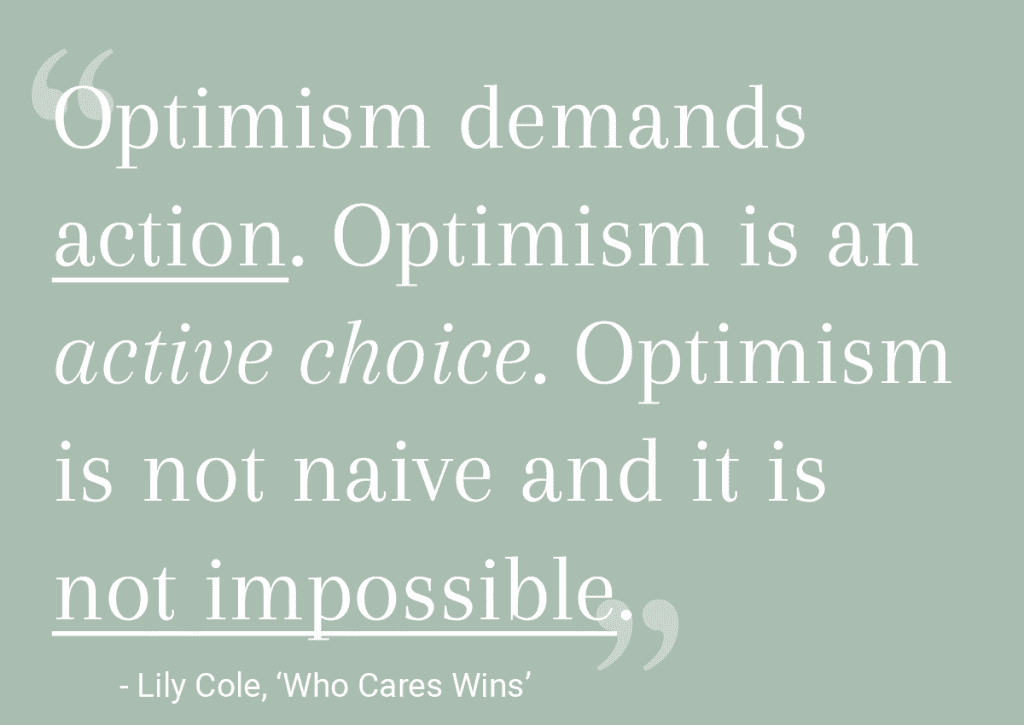 On the back of Cole’s book is a mantra for optimism and she uses a beautiful phrase in her podcast series: “listen deeply, and choose optimism.” It makes me want to find out more about her philosophy. She doesn’t disappoint.

“The point of optimism is the belief that we have the power to change. It is the belief that the future is unwritten and that we can choose to create the future we want. That, for me, is what optimism means. So, yes, you can be on the one hand very upset about the world, and worried about the [climate science] data and the situation. And there can be a lot of negativity or fear in response to the situation. But then you can choose optimism. You can choose to say, ‘actually, we’re not doomed. We still have time, we still have choices we can make. And we can choose to do things differently, we can choose to make things better’. So for me, it’s a mindset of how we want to embrace the future, as opposed to a prophecy on the present.”

To listen to more conversations with Lily, discover the ‘Who Cares Wins’ podcast series.