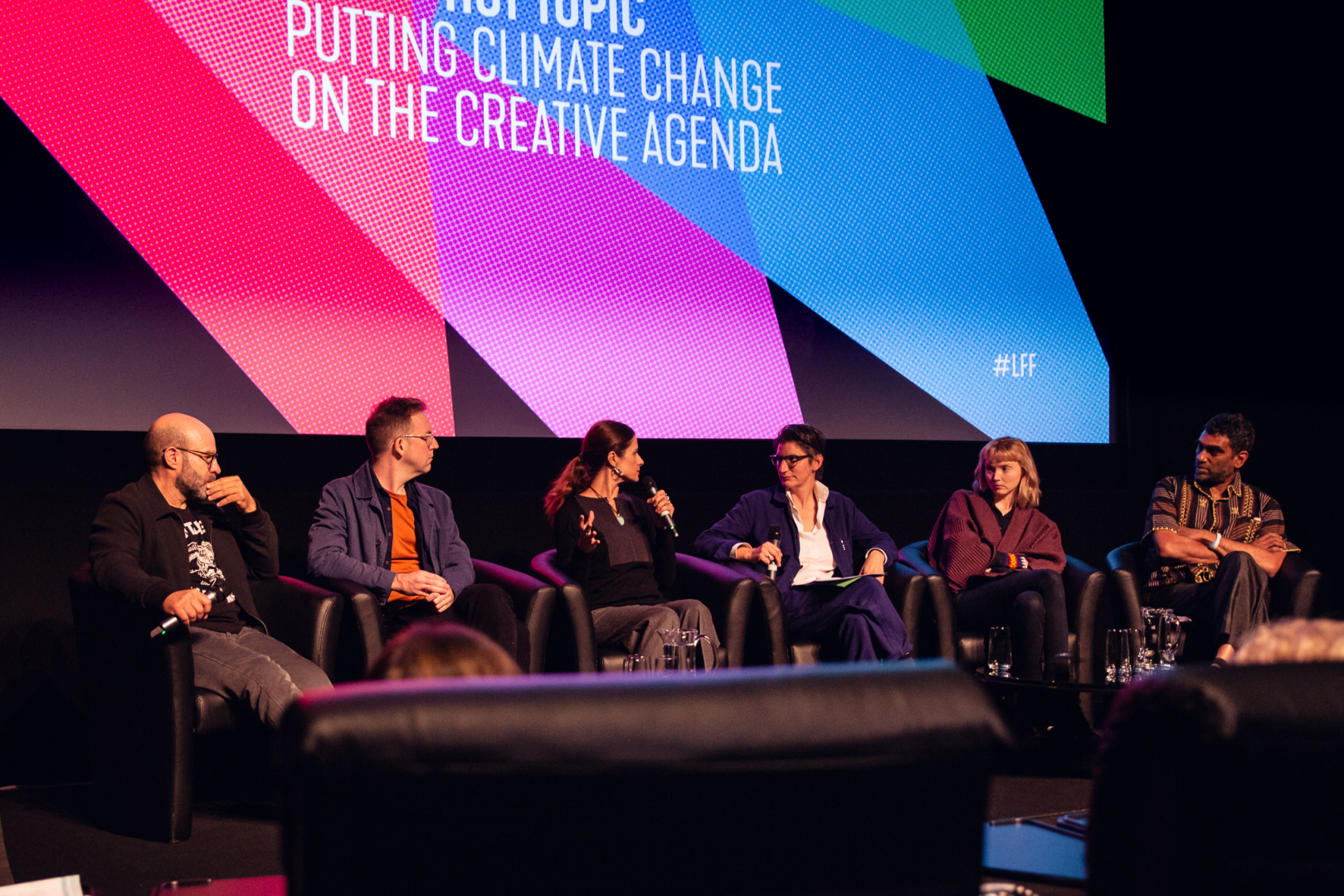 How can the creative industries balance compelling storytelling with the scientific facts and harsh realities of climate change? And, in an age of online streaming services and social media, can the documentary form still engage audiences, particularly in the case of environmental issues? Jess Search, chief executive of Doc Society, put these questions to a panel of industry experts on Monday 7th October during the second week of the British Film Institute’s London Film Festival.

Secretary general of Amnesty International Kumi Naidoo opened the session with storytelling’s ability to affect social and political change, and the urgent importance of putting the climate emergency to the top of the creative agenda. Growing up in South Africa during Apartheid, Kumi has been an activist and social justice campaigner since the age of 15. Having experienced firsthand the power of culture in moving societies forward, when it comes to the creative community’s potential to mobilise itself in the face of climate change, Kumi noted: “You have only just begun to scratch the surface.”

Livia Firth then joined actress, model and activist Lily Cole, director, producer and screenwriter Scott Z. Burns and Duncan Macmillan, playwright and director, in a lively discussion chaired by Jess about the creative industry and climate change, drawing on their own experiences. Here are just a few takeaways from the session.

Strike a balance between science and storytelling

At a time when (what can frequently seem to be) overwhelming statistics are coming at us thick and fast, finding stories and narratives that can turn those numbers into meaningful forms and relatable connections is crucial. In 2014, the “dramatised lecture” 2071 opened at The Royal Court Theatre; written by Duncan with climate scientist Chris Rapley, the play was very scientific and fact-focused. “People were so cross that we took the emotion out of it,” he said, a point echoed by Lily who said she has feelings of “anxiety, hypocrisy, guilt” at the same time as feeling “energised and optimistic.” Unlike science’s primary modes of communication – which are stacked with statistics and driven by analysis –  creative forms (be it film, poetry, dance) are not only better placed to grapple with such myriad emotional experiences but are often, in fact, motivated by them.

Duncan observed that for those who are taking the lead from younger generations at the forefront of climate campaigns, “despair doesn’t seem to be an option.” Recognising his advantageous social position as a cisgender, white, middle class, able-bodied male, Duncan said that he is still working out how to use those privielges positively and with responsibility, stressing that the emerging young voices in the creative industries are the ones that we should really be listening to. 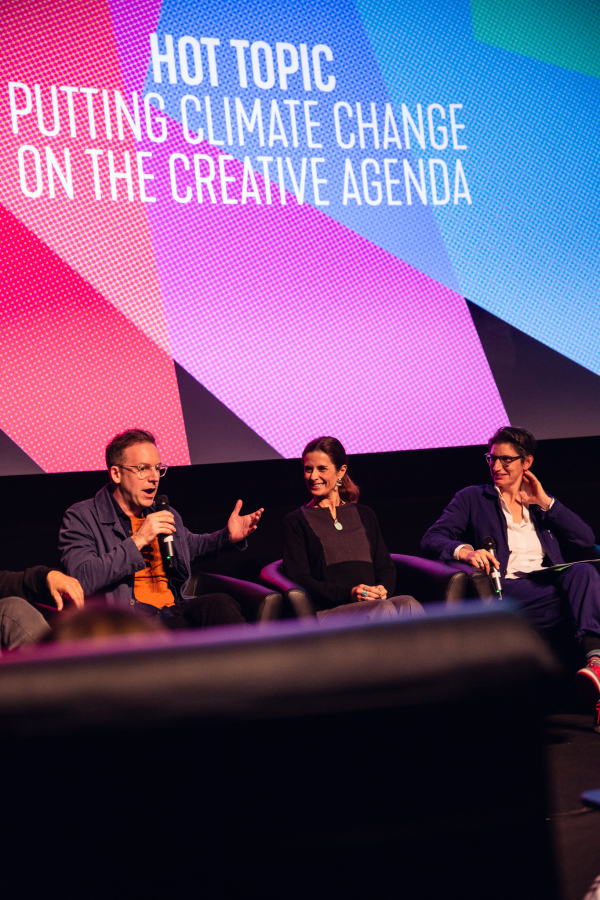 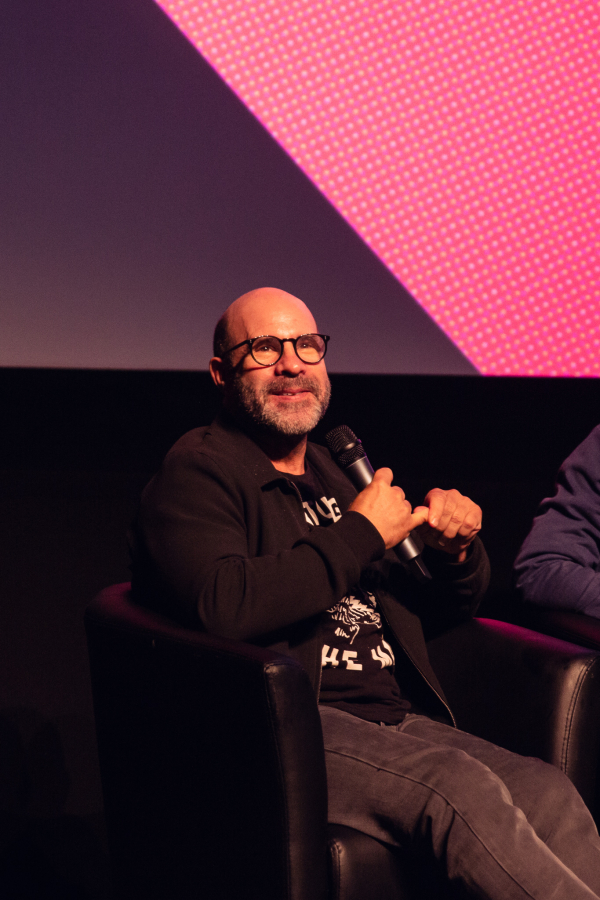 Make climate change the context of the story, not necessarily the story itself

Jess noted that often documentaries grappling with environmental issues follow a familiar story arc, something similar to fear, fear, hope; an optimistic ending can seem somewhat artificial as a conclusion to such topics where positivity is often speculative. The panel suggested that familiar narrative forms, like that of the documentary, are perhaps too narrow, and agreed that to avoid this, it’s important to make climate change the context of every story, rather than the story itself. Jess nodded to The Archers as an example of how this is already playing out with audiences; loyal listeners have recently followed several members of the Ambridge community get involved with sustainable environment initiatives and local conservation. Livia noted that technology and streaming services have changed the way audiences consume movies, and that this can only be a good thing when it comes to bringing life-changing documentaries into the mainstream.

Just as story arcs and contexts need to shift, it was agreed on by all panelists that protagonists and characters bringing those narratives to life also need to be more representative and diverse. Kumi recognised that in the media: “The value of the lives of people of colour is so drastically and differently valued to those of white people,” and Duncan argued that we need a “plurality of voices” to enliven these discussions and bring climate change more into the mainstream. Recognising that his own socio-economic privileges are similar those Duncan self-identified, Scott even offered to give up his seat to any volunteers from the audience who could add a new voice to the conversation.

Lily introduced the idea of comedy and humour early to the discussion, noting that such creative forms have the ability to bring voices across sectors together. It was a point touched on in Kumi’s introduction too; he said that taking a position of neutrality on environmental issues is “choosing to be a part of the problem,” and so if inactivity is not an option, we must feel energised and empowered to act – something which the creative industries has the capacity to nurture and spread throughout its audiences. For Kumi, the importance of joy and laughter in continued campaigns is invaluable: “While we fight this fight, let’s make sure we have as much fun as possible,” he said.

Watch the best documentaries that will change your life.

Plan a family movie night and settle down with film to inspire future climate activists.

See what else the Eco-Age team has been up to out and about!