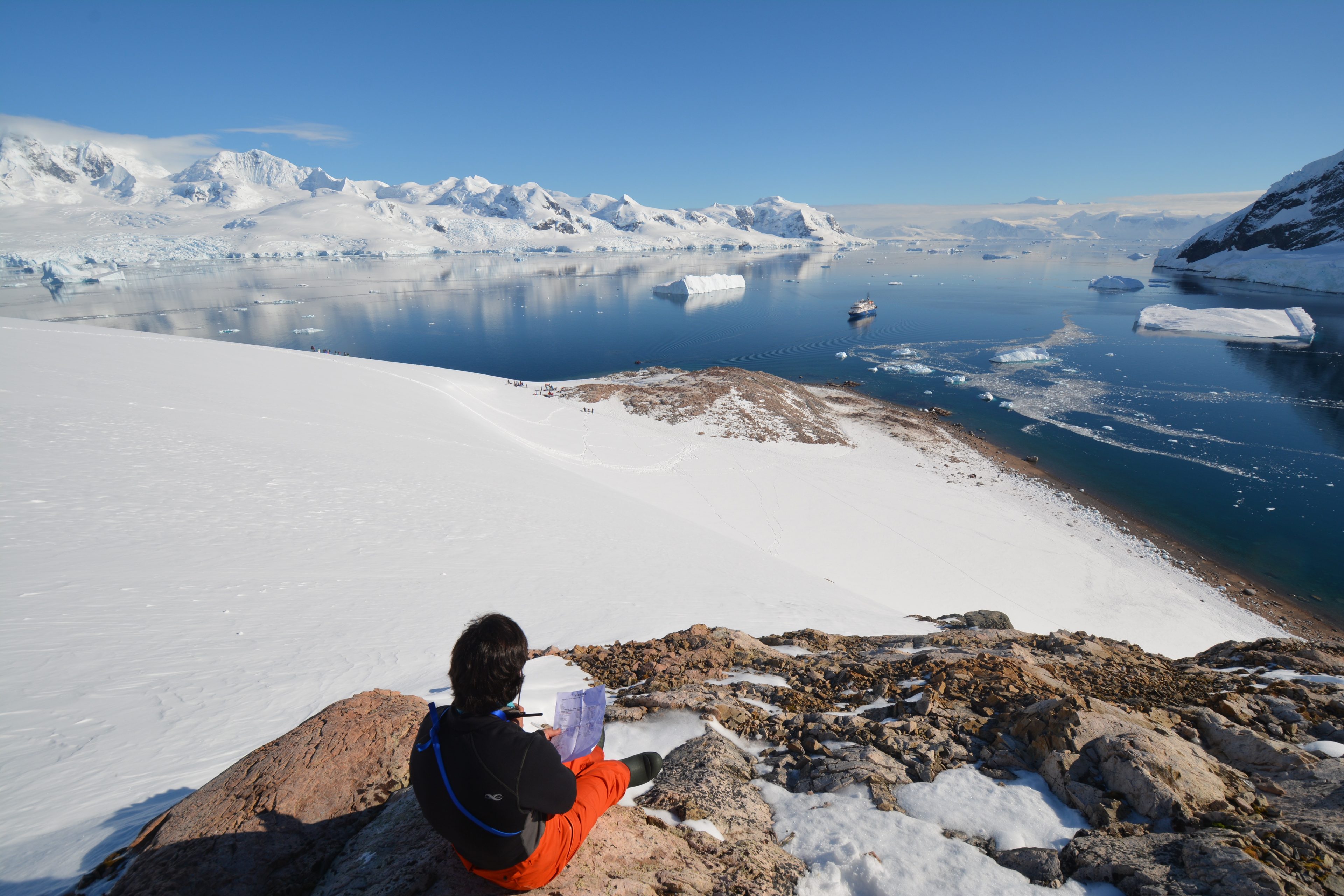 United in their fight against the Polar ice crisis, the Arctic Angels is a collective of 28 young women from around the globe committed to protecting our Global Commons. With support from Eco-Age, the international network is raising its voice to fight against climate change.

In 2009, Divya Nawale journeyed from Southern India to Antarctica to join Robert Swan’s 2041 Foundation’s International Antarctic Expedition. There, witnessing snow for the first time in her life, the Antarctic’s polarising surroundings shook her senses and awakened her to the realities of the climate crisis. As the icebergs around her melted, Nawale realised she had an opportunity to use her voice for the polar ice crisis.

Ten years on, having travelled to Antarctica once again in 2018 and seeing even greater devastation to the ice caps, Divya Nawale is one of 28 young women from around the world who have elected to become Arctic Angels. Motivated to protect Polar ice, the Arctic Angels herald from 19 countries around the world, from Brazil to Greenland to the Philippines. The network, set up by Global Choices in 2019, is a youth-led, intergenerational action network leading by example on intergenerational cooperation. For Nawale, witnessing the ice crisis first-hand was pivotal to her journey with the Arctic Angels. “I would never have imagined that a girl like me from India would have the opportunity to use my voice for the Polar ice crisis,” she says. “I’ve had a varied career in the last decade working on several initiatives from a grassroots awareness level to large-scale programmes providing research and policy analysis across all seven continents.”

It is this international collaboration in the fight against the ice crisis that makes the Angels’ voices so powerful, says  Emma Grace Wilkinson, the Arctic Angels coordinator. “When a young woman thousands of miles from the Arctic who has never seen snow or ice is calling on world leaders to protect the Polar ice caps, in order to protect her own community, it captures attention.” Open to those under the age of 35, the group’s ambition is also to foster community and collaboration within the youth environmental movement. “When young people are empowered, the ripple effects of positive change that they can create are limitless,” says Wilkinson.

Astrid Tuuli Grace Determan is one of the youngest members of the Angels, aged just 14. Having begun using her voice for good at just age five, Determan founded EPIC-Animals to empower young children to save endangered animals. This later led to her campaigning for the protection of caribou in the First Nations, journeying to the Gwich’in Nation 120 miles north of the Arctic Circle at the age of nine. “The Gwich’in depend on nature for their physical survival, but it is so much more than that,” recalls Determan, relaying the environmental and spiritual importance of the caribou. “What my heart saw in the Arctic, through my Gwich’in friends, I will never forget. That has guided what I do now and will do with the rest of my life.” A pivotal moment in her young life, Determan’s compassion caught the eye of Inge Relph, Co-founder of Global Choices, who invited Determan to be the founding Arctic Angel. “I was so proud to be our first spokesperson and to be a small part of building this inspirational community.”

Determan now describes the network as “part incubator, part family”, an analogy that alludes to the support and mentoring provided by the all-female, youth-led movement. Globally and culturally diverse and consequently far-flung, it is the shared experience of the environmental fight that unites the network: “sharing experiences with each other only deepens this understanding and drives us to call for wise global choices to be made to protect the precious Global Commons on which the future wellbeing of generations depends.” Global collaboration, it seems, has given voice to the Arctic Angels’ message of interconnectedness. “As a network, we support one another’s initiatives and campaigns, from forest conservation to calling for a Moratorium on deep seabed mining,” explains Wilkinson, highlighting that for global action to be truly effective, environmental devastation cannot be treated in isolation. “Just as the Global Commons are deeply interconnected, our efforts to protect them must also be.”

Though each of the Arctic Angels’ campaigns are often uniquely inspired by their own experience of climate processes – be it rising sea levels or desertification – it is their united on the ice crisis that remains its most poignant and pressing campaign. The heating of the Earth is no new conversation, with rapid ice decline stark evidence of rising temperatures in the Arctic which is warming at a rate two or three times greater than the rest of the planet.. The cascading effects of this, from ocean acidification to extreme weather events to food insecurity, is what motivates much of the work carried out by the Arctic Angels: “The Arctic and Antarctic ice caps are the thermostats of our planet. We hope to drive policy change to defend the Central Arctic Ocean from exploitation – to protect the ice we have left.” Wilkinson’s argument is persuasive and urgent: “Our reason for this prioritisation is simple: you can’t plant ice.”

Two years into the group’s inception and the effects of the pandemic cannot go amiss. “Climate conversations may be on pause, but the ice melt is only accelerating,” says Wilkinson. “With key events such as COP26 and the Arctic Circle Assembly postponed, we have been busy online mobilising in our own communities, building our capacity and forging new and fresh partnerships.” This year, however, looks to be even busier for the Angels. In November 2021, the group looks to join the 2041 Climate Force Antarctica Expedition. For founder Robert Swan, these expeditions are an opportunity to inspire young people towards positive solutions. “We no longer have the luxury of being merely aware,” he urges. “Our awareness must be linked to actionable solutions for a sustainable future.”

Joining the company of scientists, educators, business leaders and young global activists will be Zanagee Artis, a passionate Arctic Advocate whose work founding the movement Zero Hour has demonstrated the vitality of youth voices in the climate movement. Having won an open competition to join the Arctic Angels on this expedition, where the judging panel included Eco-Age’s Creative Director Livia Firth, Artis hopes to add his voice to amplify those of the Arctic Angels and use the opportunity to share the implications of climate destruction he fears he will witness on the trip. “This expedition will help my voice and the voices of young people around the world in the climate justice movement, giving me the opportunity to share a story of the impacts of the climate crisis on the Antarctic,” he explains. “The climate justice movement is powered by grassroots activism and is rooted in local advocacy around the world, but this expedition is an opportunity to highlight why those struggles are so important on a global scale.”

While exploring Antarctica’s icy landscapes, hiking alongside penguin colonies, and travelling through Neptune’s Bellows, the itinerary is nothing short of an environmentalist’s dreams. Witnessing first-hand the realities of the melting Polar ice, it is the group’s ambition to communicate their findings with world leaders gathered at COP26 from onboard the ship, directly calling to action from the Ice Crisis frontlines.

The Hakhu Project: Empowering Women in the Amazon
If Vintage Could Talk: Stylist Mary Fellowes Shares the Stories Behind Her Favourite Pre-Loved Piece...
Modern Slavery Stops Here
Carolina K: 'The Present is Handmade'