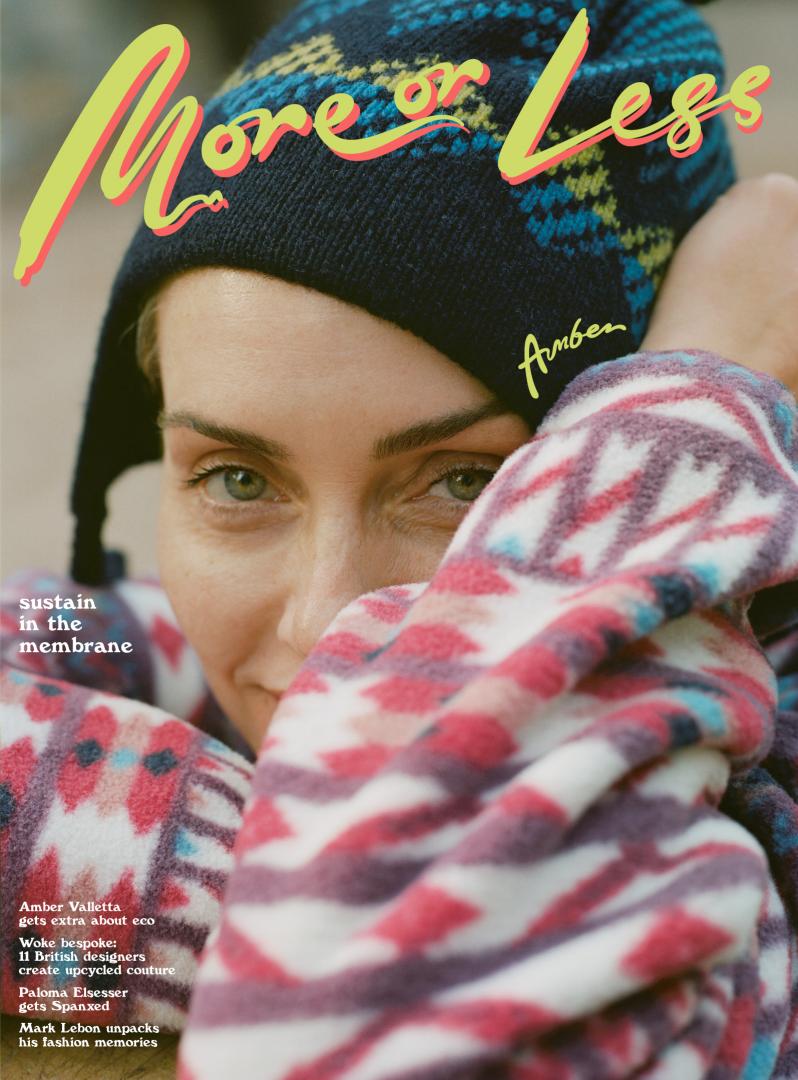 More Or Less: Jaime Perlman on a New Kind of Fashion Magazine

More Or Less mag – launched by former British Vogue creative director Jaime Perlman – is a fashion magazine with a difference, celebrating creativity, originality, and provoking thought about how we buy our clothes. With its second (sustainability-focused) issue currently on sale and an exhibition opening this week at MATCHESFASHION.COM’s 5 Carlos Place, we spoke to editor and creative director Jaime Perlman about the inspiration behind it.

Flicking through the (non-glossy and very beautiful) pages of the second issue of More Or Less mag, and it’s clear that this is ‘not another magazine showcasing only current-season fashion’.  Creativity, originality, and ‘how real people actually dress’ are all celebrated, as displayed by sustainability advocate (and Eco-Age contributor) Amber Valletta on the cover wearing a Patagonia fleece and hat.  That’s not to say that ‘the transportive magic and fantasy of fashion’ has been sacrificed.  But the approach is different.  “It felt like there was room for a magazine that depicted fashion that wasn’t necessarily straight off the catwalk,” explains editor and creative director Jaime Perlman, former creative director of British Vogue. “I like the idea of looking at clothing in a more inclusive and creative way, as well as raising awareness about sustainability in fashion. I really wanted to disrupt the formula that has overtaken so many other fashion magazines.”

If anybody knows about fashion magazines, it’s Jaime. Having developed a love of fashion at a young age (“I always loved fashion. As a kid, I had sketch books of fashion designs and wanted to grow up to be a fashion designer…or a paleontologist”), Jaime began her career at American Vogue before relocating from New York to London in 2005 to be Art Director, and eventually Creative Director of British Vogue.  Now running her own creative direction agency and consultancy, Jaime Perlman Studio, last summer Jaime launched the first biannual issue of her own independent publication – More or Less – with supermodel and fashion icon Kate Moss on the cover.  “I was really thrilled to have Kate Moss on the launch issue, that was a real achievement in my book,” says Jaime.  “I just have so much gratitude for all the people who agreed to take a chance on my small independent project.  It’s rewarding to have created a platform for so many talented people.”

For its second issue (available to buy now), the theme of ethical and eco-conscious fashion is front and centre.  “The magazine was always incorporating sustainability into its ethos,” says Jaime, “but the second issue I wanted to make a more clear message. I feel it’s a very important topic right now, and it’s not going away. I wanted to create a space to have fun and make eco-conscious fashion feel fresh and exciting.”

The issue explores many ideas around the way people shop and choose their clothes that had a sustainable message, Jaime explains. “Supermodel Amber Valletta was interviewed about the fashion industry’s responsibility to make a positive change; Colin Dodgson photographed Rottingdean Bazaar’s catwalk collection using clothes that were rented from fancy dress shops, highlighting the idea that clothes could be shared; we teamed up with Depop, the app that allows you to buy and sell used clothes, to do a shoot with all product sourced from Depop; we interviewed designer Priya Awhualia who is a young fashion graduate specialising in sustainable design; and Mark Lebon photographed his archive of clothing that he’s kept over the years, accentuating that clothing can be kept and cherished, not thrown away.” 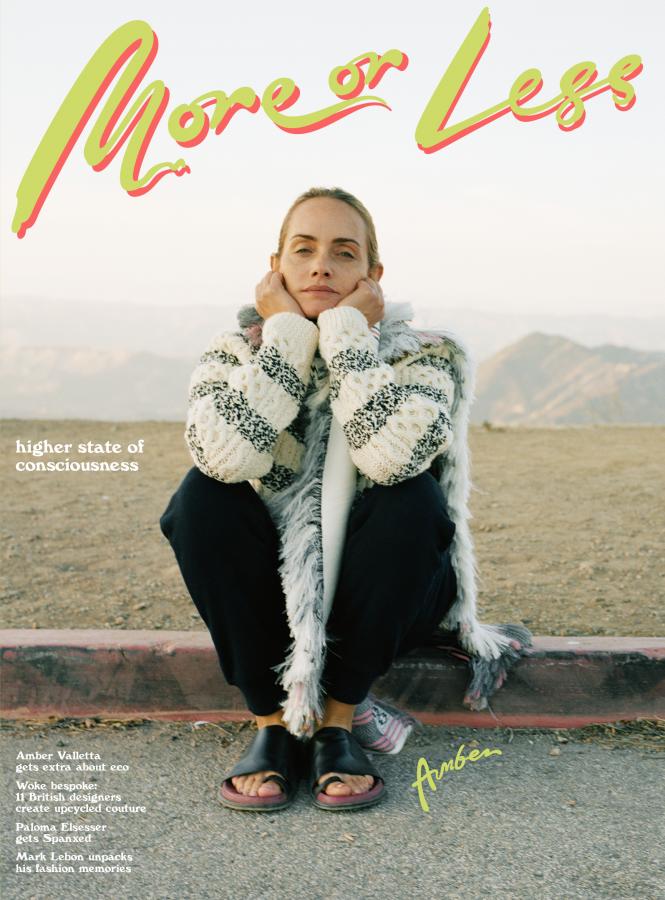 More Or Less also commissioned 11 British designers to create a one-of-a-kind garments using leftover materials from their ateliers, for a shoot by Alex Carl and Chloe Le Drezen. It was an exercise in sustainability, showing that something beautiful can be made out of what would normally be wasted.

Tonight, an exhibition of the bespoke pieces created by Alice Lee, Conner Ives, Halpern, Dilara Findikoglu, Erdem, Louise Gray, Phoebe English, Richard Malone, Richard Quinn, Simone Rocha and Vivienne Westwood commissioned by More or Less launches at MATCHESFASHION.COM’s townhouse 5 Carlos Place, known for supporting young creatives and design talent, where it will be open to the public until 2nd March.  (See What’s On and sign up to attend events at 5 Carlos Place here).

A goal of More Or Less is ‘to provoke thought about the decisions we make when we buy clothes – factoring in the realities of cost and consumption’. Originally, Jaime’s plan was that every head-to-toe look in the magazine would cost less than £500. However, after presenting this concept to Eco-Age creative director Livia Firth, Jaime adjusted the price range to include outfits up to somewhere in the region of £1,000 (as well as focusing on certain brands that prioritise sustainability). “Livia warned me about the risk of not paying for what things cost. Every garment and aspect that goes into making the garment costs money. If you’re not paying for the cost of materials and the labour that goes into a piece, someone is losing out,” says Jaime. “Therefore I raised the price to be ‘in the region of’ £1000 head-to-toe. We have gone over in some cases but I wanted to set a parameter for people to aim for.”

What does Jaime want readers to take away from the magazine? “I hope they come away feeling uplifted and that they have seen something different from anything they have seen before,” she says. “I also hope it inspires people to think more about the choices they make when they shop.”

“We try to save every little scrap of fabric that we can. This piece is made up of old toiles we’ve kept from our previous collections, and features old textile samples that our past interns have made. It has sentimental value to us, as we wanted to create something beautiful from what our old team members had left behind for us and worked so hard on,” says Dilara Findikoglu.

“Patchworking is one of the oldest and most personal ways to create with small amounts of fabrics; I used the technique to form the skirt and top of this look. A lot of the textiles are small offcuts that I had around from my last collections. I like the idea of using straightforward approaches with my maximal, considered aesthetic,” says Louise Gray.

“The chunky garlands which make up this garment and drape over the body are made up of countless pieces of surplus and scrap fabric, piled up and cut into small squares, which are then individually threaded on to lengths of fine cord,” says Phoebe English.

“Buy Less, Dress Up is a motto I often use, and it inspired me here. The gown features my signature 18th-century flat corsets, and are lifted from the original Wake-Up Cave Girl A/W ’07 collection, but are one-of-a-kind: created here in a tartan silk and candy-stripe silk jacquard selected from surplus fabric out of my archive,” says Vivienne Westwood.

Richard Malone says: “Entirely handmade, this piece is crocheted using recycled ex-stock acrylic yarn and was reconstructed from two fitting toiles from our A/W ’18 show. The form has been defined by the varying shapes of excess fabric.”

“It may have taken 12 days to make this piece, but we wanted to ensure that it felt organically put together. Inspired by handicraft, we used whatever material and yarns we could find in the studio to create something that felt modern, combining a mishmash of colours, techniques and shapes,” says designer Alice Lee.

“I reinterpreted the high-collared silhouettes and extreme proportions of Victorian nurse uniforms for this piece, replacing the traditional starched and scrubbed fabrics with a lacquered wet-lace fabric from my archive that I originally used in my SS14 collection,” says Simone Rocha.

“It’s wonderful to create something out of nothing. This dress is made of a recycled piece of sample fabric. Waste not, want not! I love the idea that it could be a gown that evokes a different time and that by playing with different visual cues it could feel modern while evoking eras past,” says Erdem.

“Halpern has always been about the juxtaposition of textures, materials, and colours. For this piece, we wanted to explore how far this could be taken, using fabrics from past seasons working against each other to create a mega-glamorous and high-voltage garment. It was exciting to breathe life into unused things in a way that we hadn’t explored previously,” Halpern says.

“Using a silhouette lifted from my SS19 collection, I thought up this one-of-a-kind piece, making it out of a spare sample fabric. It’s particularly special, as the silhouette will never be reproduced in the same red rose print,” says Richard Quinn of his rose print design.