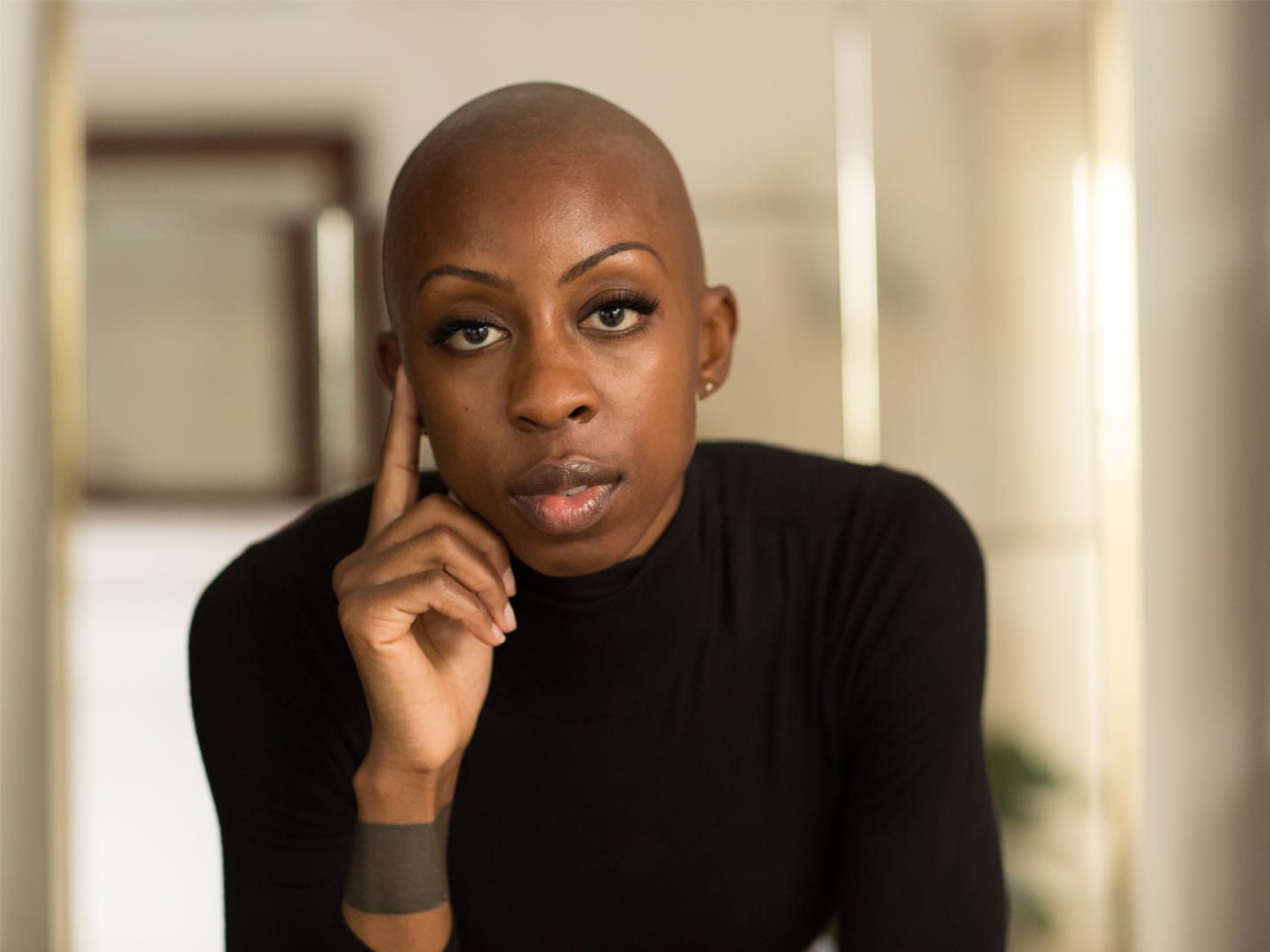 Oge Egbuonu’s directorial debut ‘(In)visible Portraits‘ is a powerful portrayal of Black women in America, reclaiming the true narrative as told in their own words. Livia Firth speaks to the director about the film’s role in re-educating on Black history, as well as the importance of acknowledgement, healing and spirituality in igniting change.

I have known Oge Egbuonu for a few years, and always admired her determination accompanied by curiosity, kindness and love for everyone. Her debut film, ‘(In)visible Portraits,’ is one of the most powerful female portrayals that I have ever seen. It takes you on a deeply emotional journey to understanding the experience of Black women in America; a wake-up call to white privilege and a poignant unlearning of the history we have been taught.

Transcendental and ancestral wisdom runs through the testimonies of the women interviewed in the film. The way Oge interweaves all the voices, stories, feelings, emotions is incredibly strong and poetic at the same time, truly conveying the ‘unbroken intergenerational commitment’ spoken of by one of the women in the film.

I interviewed Oge immediately after watching the film; this is an extract of the powerful conversation we had. 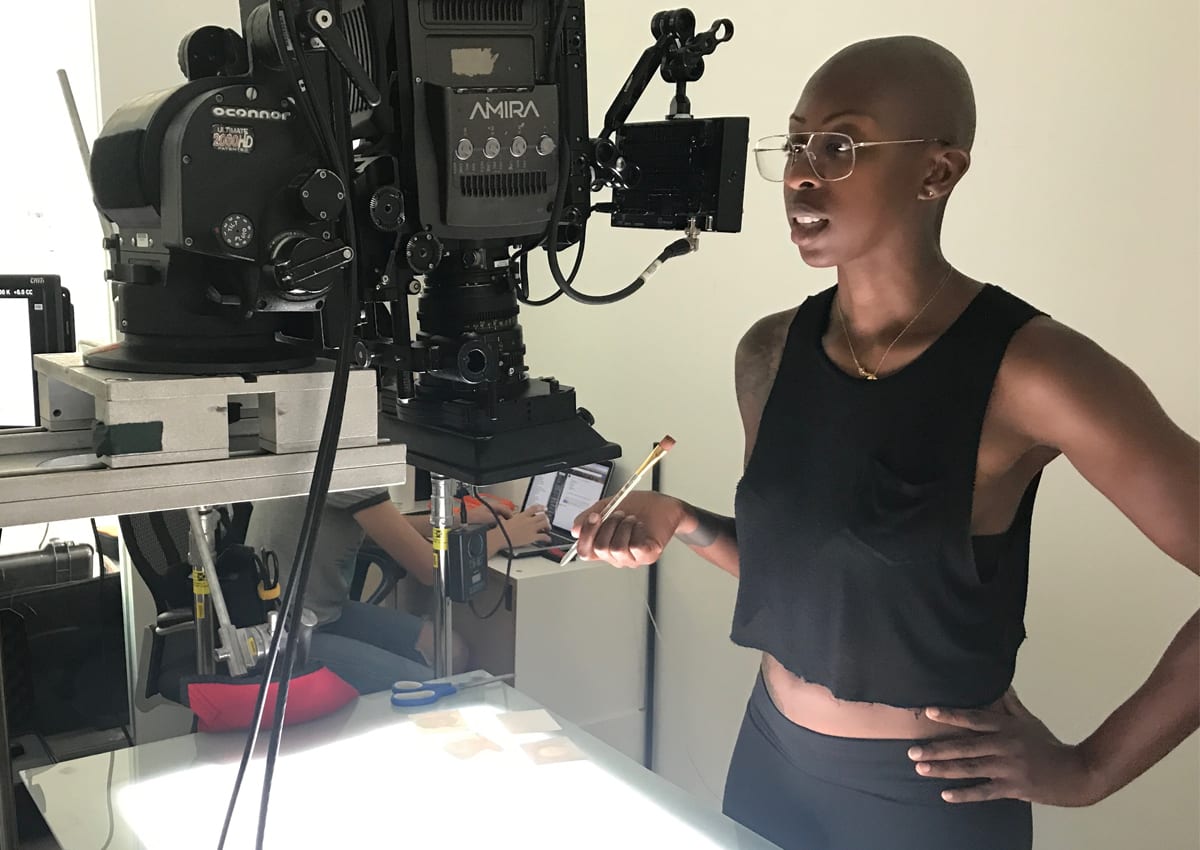 I’m completely in awe of you and the film. I was completely mesmerised by the way you wove real magic into the story. You go from talking about soul wounds to the resilience and beauty, through to the future, the strength and the legacy. Can you tell me a little bit more about you journey into creating it was like? I feel that you were able to create this homage and poem – a love letter to Black women, as you call it – and I feel like you take us as the viewer into your journey as well.

Well, it was a hard one because in order to make it, I did about eight or nine months of research where I dedicated six days a week, 14 hours a day to researching Black women’s experience in America and black culture in America. So, you know, I was reading every book I could find by Black women, every book written about Black women. I was in archive centres reading slave narratives and just basically immersing myself in this culture.

The first two months were very, very hard. I would spend most of the day in bed crying. And I realised that I had to get back into therapy because I was holding on to so much and I was reading all these things and I was filled with so much anger and rage and sadness and also just disappointment in myself initially because I thought, ‘how am I thirty two years old and did not know this, how do I not know any of this?’

I had to realise and give myself permission to understand that what we’re taught in schools in America is revisionist history. We’re not really taught the history of this country. And so knowing that empowered me to say, OK, if we’re taught revisionist history and what I’m learning is the actual truth of this country, how do I allow that to fuel this storytelling in a way that not only empowers Black women, but that shed light on the true history?

Getting back into therapy and reframing what I was experiencing, as well as doing a research phase, empowered me in so many ways because then I felt an obligation to not only myself, but to the legacy of Black women and also to the ancestors who are no longer here, because this country was built on the backs of them. I felt an obligation to push through it and find a way to tell the story that was not only a form of truth telling, but also that could keep the viewers engaged and not want to disconnect because it was so hard to sit through. 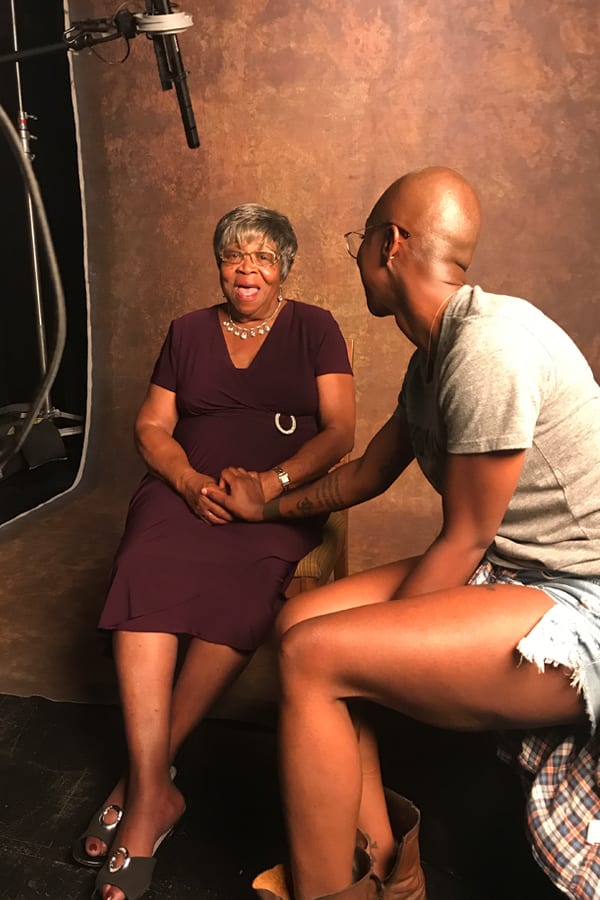 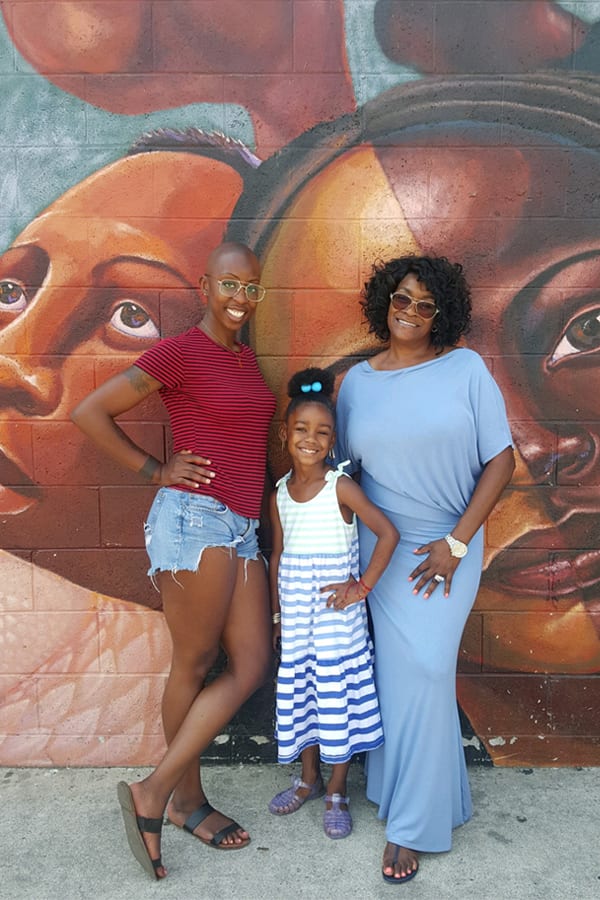 You achieved that so powerfully but also managed to create that link between the past and today that is often forgotten. Today, some people think that the Black Lives Matter movement has just started now. But it’s been going on for a long time! Your movie really helps to bring that memory and make it part of a reality that we cannot forget, that we have to bring with us. Why is that so important to you?

Yes. I also realised that you can only really change the future if you know the past. If you don’t know the history then it’s really hard for you to do the trajectory in a different way. When I started my research I realized that all movements in America happened on the backs of Black women. When you think about the civil rights movement, the faces of that were like Martin Luther King and Malcolm X and those guys. But the work was really done by Black women: Ella Baker, Fannie Lou Hamer, Septima Clark. We don’t know the stories of these women, but these movements were built off the backs of their strategizing, feeding communities, educating communities, working on speeches and marches.

How did you select the women you interviewed? It must have been so difficult.

Yeah, it was challenging. At first I reached out to every scholar and author whose book I read, wanting to ask them if they would be a part of this and lend their voices to it. Then to the young girls and the everyday women in the documentary, we reached out to so many different non-profits in L.A. that serve black communities. I spent the time getting to know some of the women they put us in touch with, I built a rapport with them and I let them know first and foremost that I wanted to get to know them and there was no obligation for them to say yes to the movie.  Then after spending time with them, getting to know them, they all said yes. So I was very grateful for that. 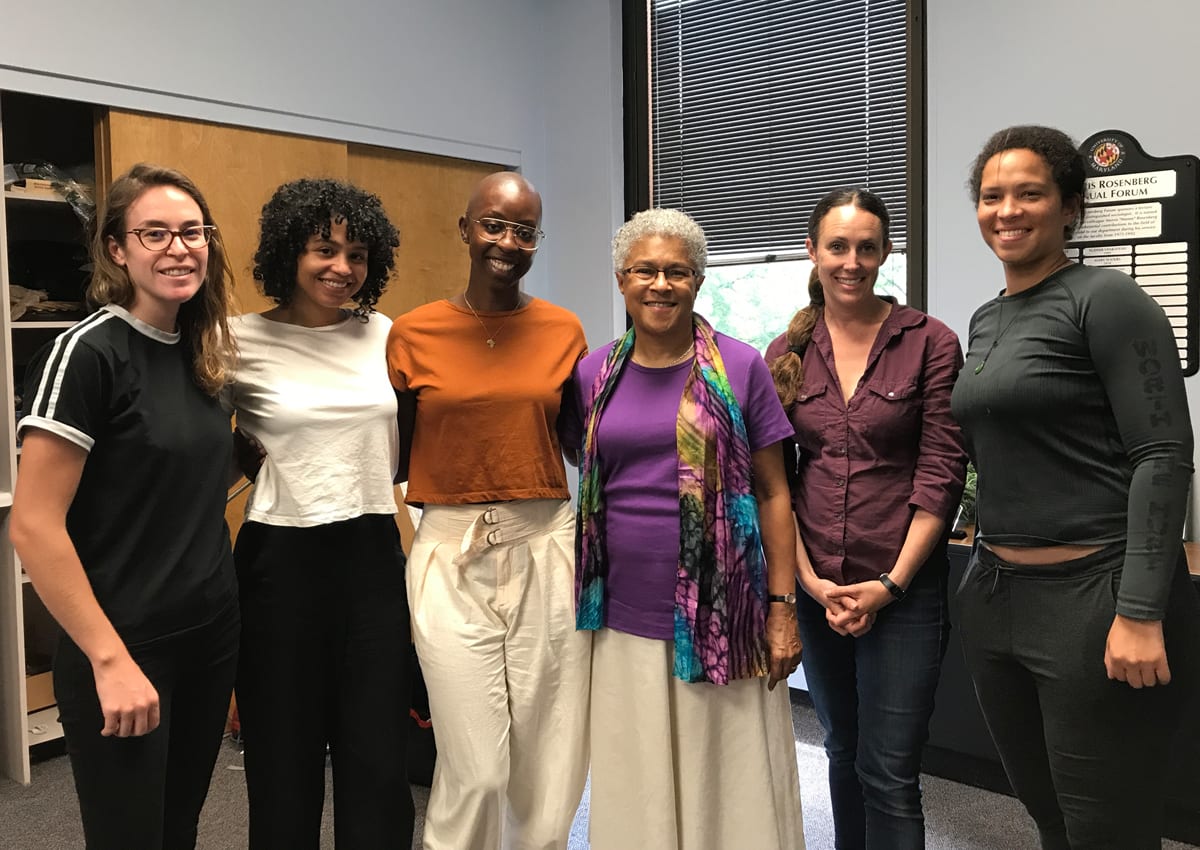 Something else that is deeply interwoven through the film is spirituality and healing, something that it is often missing in a lot of activism. What are your thoughts on that?

I think in order for any progress to be made, healing has to occur. Right? And I think the whole notion of healing is recognising that an injury has happened. You can’t heal until that’s been reckoned with or that’s been reconciled. That’s why it’s so important when you think about activism or when you think about reparations or healing in general.

What people are asking for first and foremost, especially black folks, is that you acknowledge the injury that has been occurring and that continues to occur. And then by doing that, the wound can start to heal. But if there is a wound and you just keep picking at it or telling yourself to get over it and saying you’ll be fine, then healing can’t occur. Especially in the United States, we need to heal on a cellular level, we need to heal on an individual level, a collective level and a society level.

It’s very important. I also wanted to ask you about, which struck me as particularly interesting in the film is this notion of resilience as a form of rebellion. Can you tell me a bit more about this idea?

When it comes to Black women, resilience had to be a form of rebellion because there was no other option. When you are being forced to see your children sold on selling blocks and there’s nothing you can do and you feel helpless, you have no choice but to be resilient, to continue to go on to the next day when you’re seeing or witnessing your children being lynched. You feel helpless but there’s nothing for you to do: you have no choice but to be resilient. I think that resilience serves as a form of rebellion, saying that no matter how many times you try to break me, I won’t fold. I won’t give in to your hits.

For me, the whole notion of resiliency, and we talk about it in the documentary, is that it could be used as a double-edged sword in the sense that yes, resilience can be a form of rebellion, but it can also be an excuse for people to say that it doesn’t matter how they treat you. So I think is a very fine line on how we walk resilience, because it’s great that it could be seen as a form of rebellion but it’s also unfortunate that it can be used as a way to dehumanise a person and say that no matter what we do, you’ll be OK – we can treat you any kind of way. Which is really unfortunate. 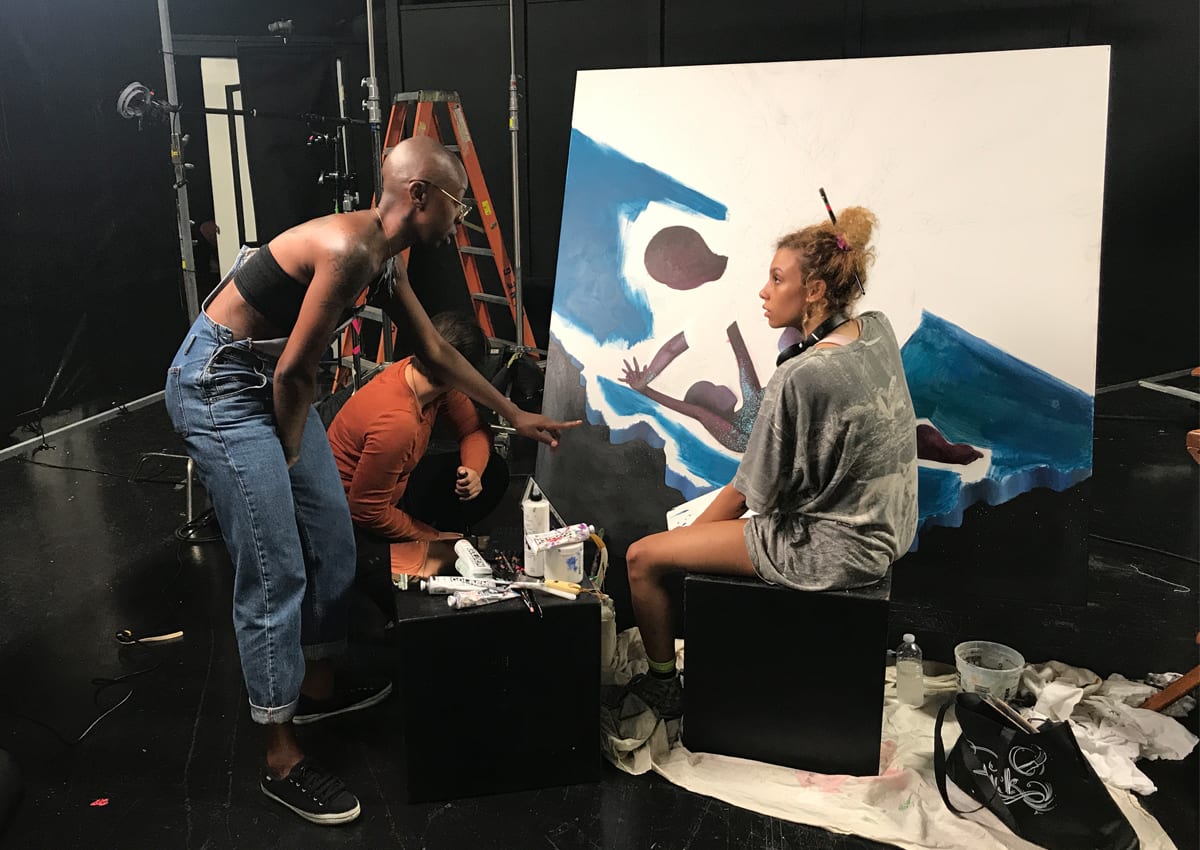 How can we make sure that what you talk about in the film integrated both today and in the future into everything?

I mean, I think I’m very hopeful in the sense that especially in America right now, we’re collectively in this space of reimagining what’s possible. People are collectively in the space of wanting to be re-educated on the things that they’ve been taught to be true. But I think we’re a long ways from seeing anything radically shifting because we you think about it, it’s not just about us reimagining what’s different. It’s basically dismantling the system that we have in place in America. The systems that we have in place in America are built on white supremacy and patriarchy. And until you dismantle those, it doesn’t matter how many reforms you, you still produce the same results. So, for example, when you think about that the origin of police, was from slave patrols. It was from literally built off the intention of terrorising Black folks and incarcerating them and killing them. And so when you understand that, you realise that the policing that’s happening in America is working the way that it was designed to do. It’s not that it’s broken, it’s actually working perfectly the way it was designed to! And so I think the way that we move forward really is about uprooting the roots of the system, which is what’s toxic and what is harmful. So, it’ll take time, but I’m definitely hopeful.

You also talk a lot about Black girl magic in the film –  if you had to explain what encapsulates this, how would you describe it?

And at the end of the film, you asked them to say three things to describe a black woman… One woman says “Strong, divine, brave.” Another says “Spiritual, dignity, poise.” What are your three words?

True social justice means reforming our institutions. Find out what you can do to help.

A Conservationist's Take on the Netflix Tiger King Documentary
A Poem by Wilson Oryema
Introducing Fashionscapes: The Diamonds of Botswana
Life As I Know It: Doina Ciobanu