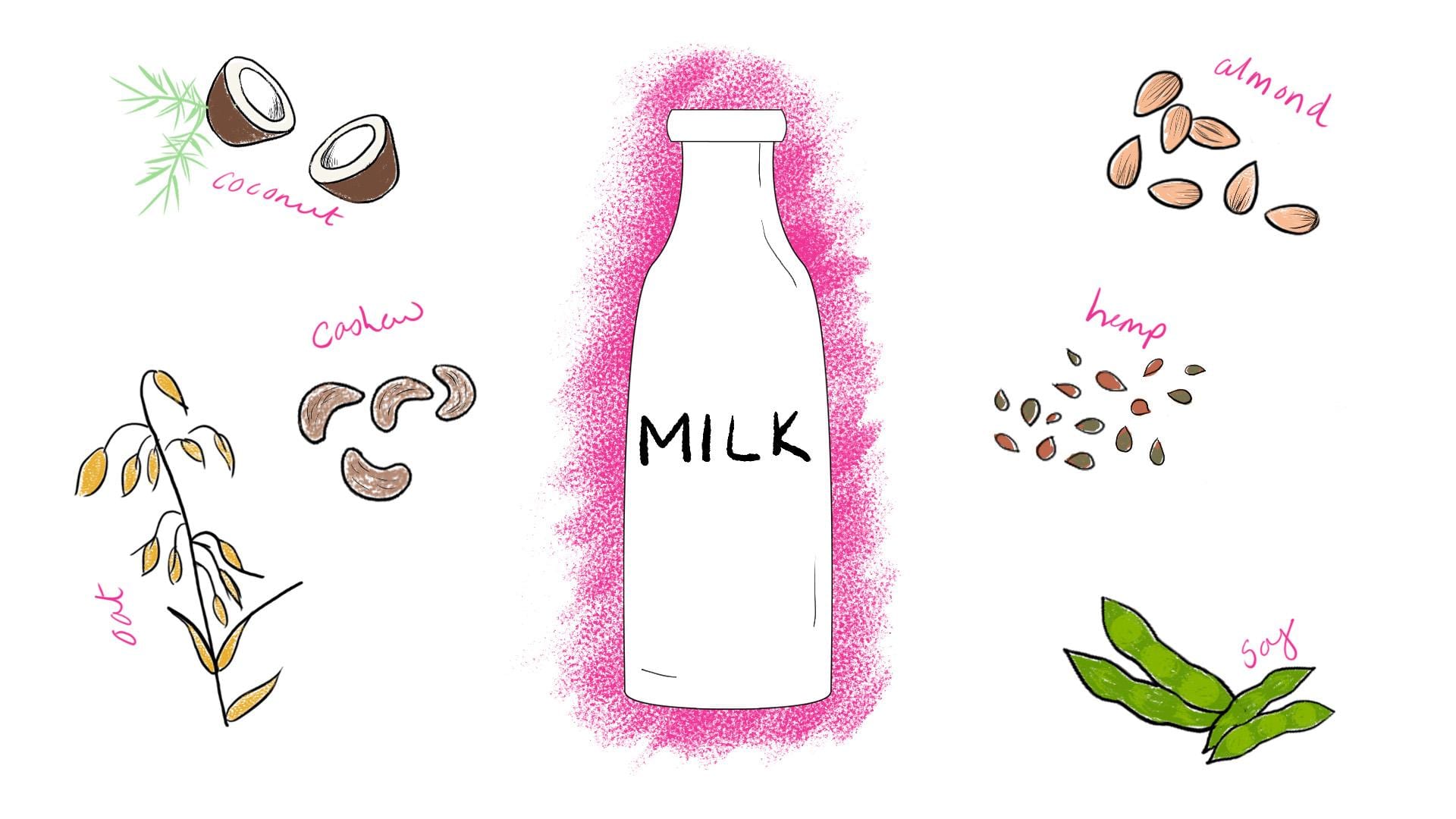 To help you choose which plant-based milk goes in your coffee or tea, here is our breakdown of the good and the bad of each…

Whether you’re doing so for health reasons, intolerance, animal welfare or the planet, swapping out dairy milk for a plant-based milk option has never been easier. Go into any supermarket or even corner shop and you will find at least a few dairy-free options to choose from. And that’s a good thing for the planet considering that meat and dairy livestock uses 83% of farmland and produces 60% of agriculture’s greenhouse gas emissions.

A few years ago, if you were dairy-free the only widely accessible alterntive was soya milk (not the most eco-friendly option). But today, as the consumption of plant-based milks has risen by 8% each year for the past decade, the increasing demand has meant numerous options are now available. (Sidenote – here’s your proof that what you choose to spend your money on really does have an impact). However,  some milk alternatives have a more negative impact on the planet than others, and can be swapped out for a different alternative. So without further ado – because we know you just want to know which plant-based milk to use in your morning coffee or afternoon tea – here is the good and the bad of each plant-based alternative: 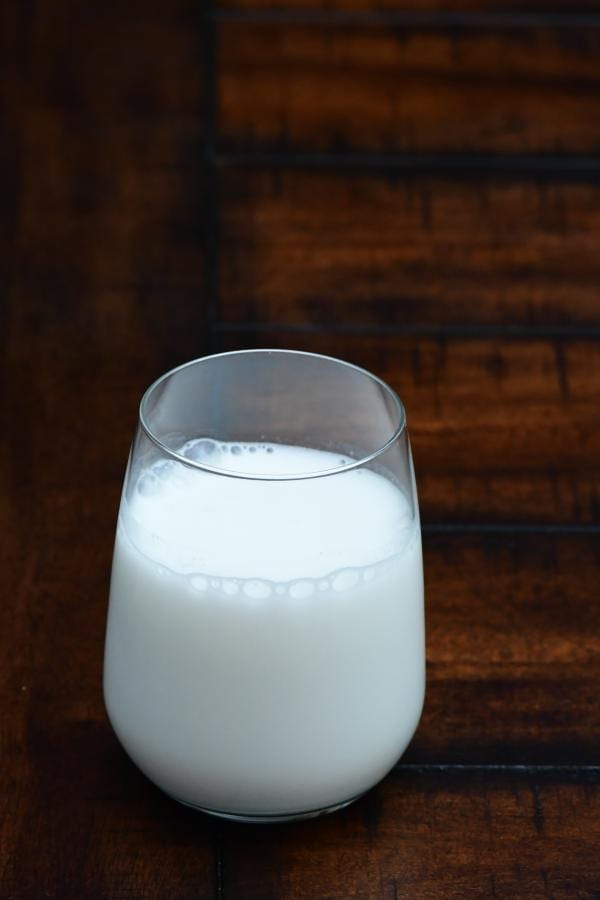 Environmental impact: In comparison to other plant-based milks, oat milk has a low environmental impact as the grain requires very little water and can be grown in various parts of the world, including Europe. Oat milk is also very easy (not to mention cheap) to make yourself as you only need zero-waste oats, water, a blender and a cheese strainer. We promise it doesn’t take more than ten minutes to make.
Best for: Oat milk is a great source of fibre and also the perfect dairy-free alternative for anyone allergic to nuts.
Best used in: Coffee! In our humble opinion, it is the best plant-based milk to go in your coffee and also foams nicely if you’re ever in the mood for a cappuccino.

Learn how to make your own oat milk at home.

Environmental impact: Almonds require over six times more water to grow than oats, according to the Water Footprint Network, and a recent study by Oxford University showed that a single glass requires 74 litres (more than an average shower). Over 80% of the world’s almonds are grown in California, which means that almonds also have a heavy carbon footprint if you live outside of the US, due to overseas shipping. However, it is worth keeping in mind that dairy milk still has a higher impact. If you’re an almond milk aficionado you can try making it yourself at home with almonds from a zero-waste shop to avoid any sort of packaging.
Best for: Good source of Vitamin D and has no cholesterol – making it good for heart health.
Best used in: Smoothies, hot chocolate, turmeric latte, baking.

Environmental impact: Rice milk also requires quite a lot of water in its production, but comparitively less than almonds.
Best for:  Rice milk is a good source of vitamin B and magnesium.
Best used in: Smoothies or hot drinks as it’s slightly sweet. 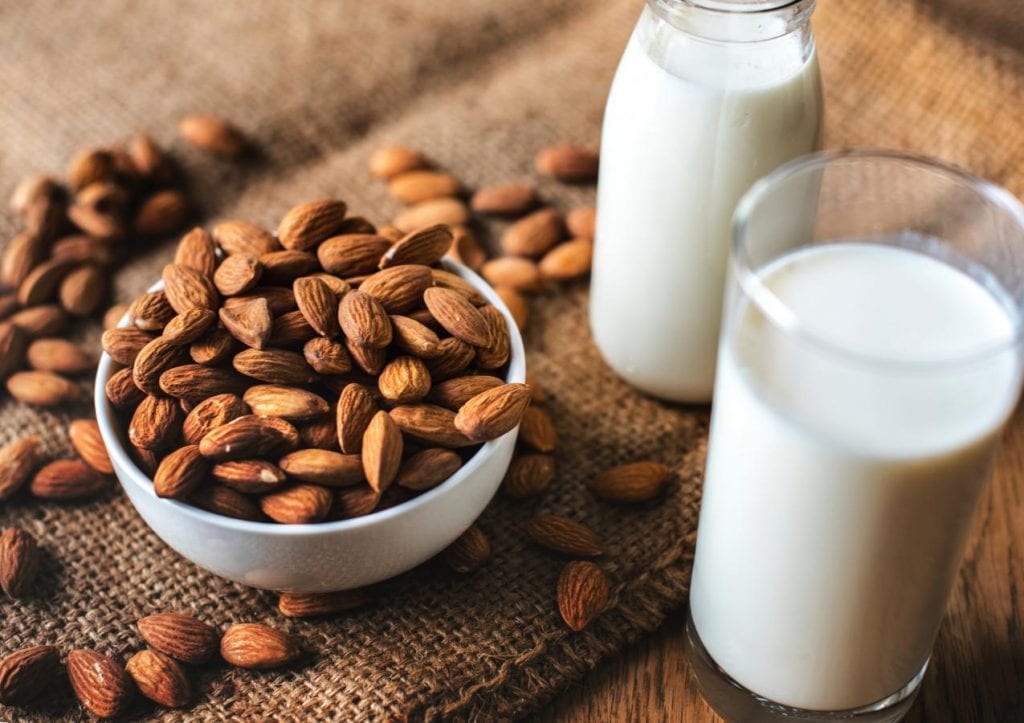 Environmental impact: The production of soy is very high as it is used in Western diets, but also is main feed livestock worldwide. Growing soy requires vast amounts of land and it is primarily grown in Brazil, where it hugely contributes to the deforestation of the Amazonian rainforest (in Brazil, the equivalent of 5.6 million acres of land is used to grow soya beans to feed farmed animals in Europe). The majority of soybeans are genetically modified for livestock consumption, and essentially include a lot of nasties the non-GMO counterparts don’t have. So we definitely recommend getting organic soy milk if possible.
Best for: Soy milk is very high in protein (and because of that the most similar to dairy milk)
Best used in: Soy milk is an all rounder, that works well in coffee and any other hot drinks, as well as baking, as it is quite sweet and creamy (and foams for frothy lattes).

Environmental impact: Coconut farming is relatively low impact but as its grows in tropical climates there is a high carbon footprint from travel involved, similar to almond milk.
Best for: Coconut milk is rich in fats (the good kind) and antibacterial properties
Best used in: Matcha latte (yes, trust us on this one), porridge, smoothies, cooking, baking and anything else that needs a tropical twist

Environmental impact: Similar to oat milk, hemp requires very little water and also naturally grows without the use of herbicides and pesticides. Making it one of the best plant-based milks from an environmental point of view.
Best for: Hemp milk is very high in omega-3, which is why it’s a great alternative for vegans.
Best used in: Coffee – but anything really!

Discover more plant-based food alternatives and find out more about the benefits of a plant-based diet.

Come Dine With Me: The Climate Edition
Social Media & Mental Health - How to Use Social Media for Good
Tried & Tested: Vegan Sausage Rolls
How You Can #TakeBackBlackFriday
Food