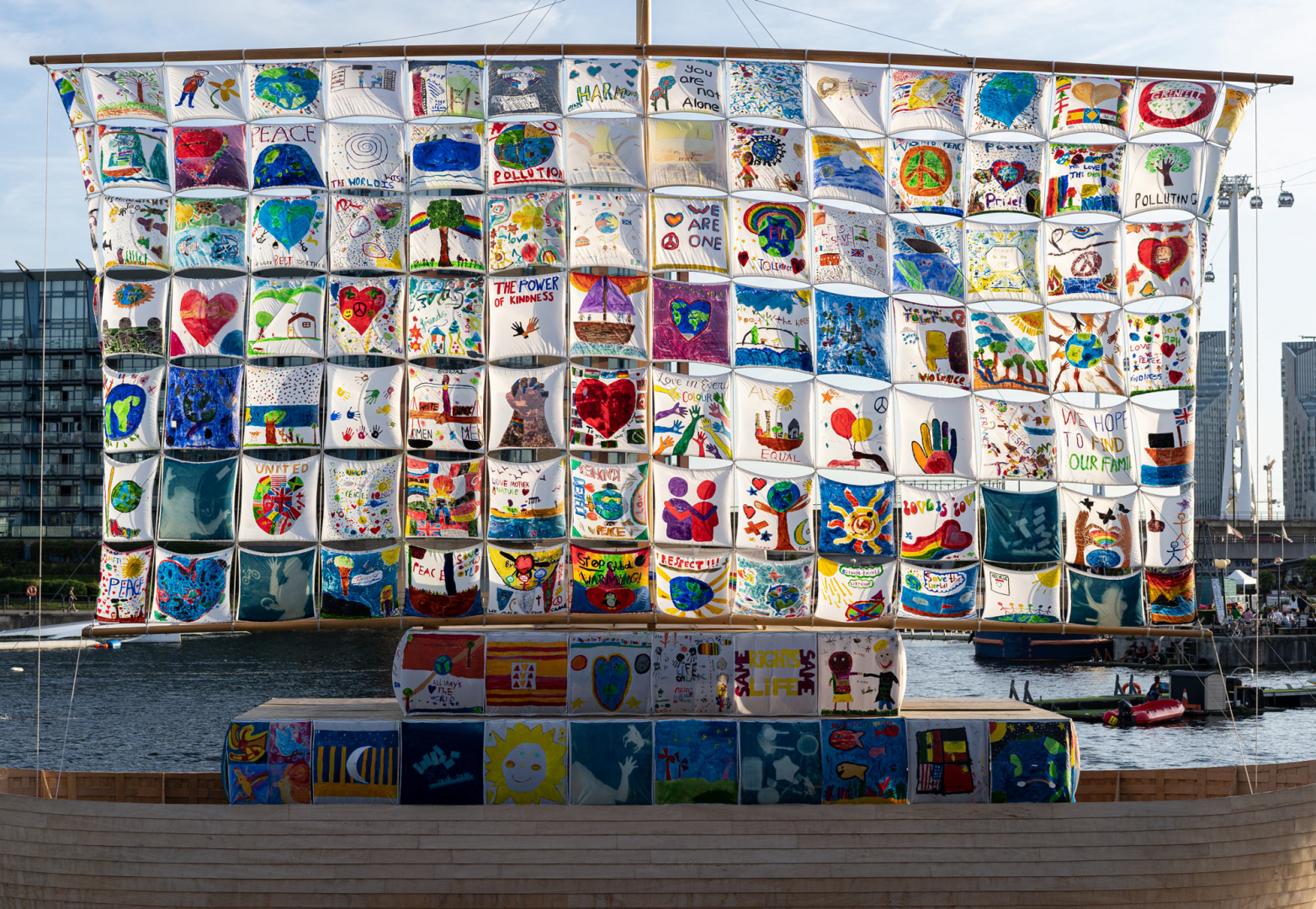 Fiona McKenzie Johnston shares the story of the Ship of Tolerance, currently moored in the Thames, and how it is inspiring a new generation of activists to engage in climate art.

It’s not often that children see their ideals pinned to the mast of a public artwork.  The Ship of Tolerance – which until the 4th October is moored in the middle of the Thames between the Tate Modern and St. Paul’s – is a collaboration between the leading conceptual artists Ilya and Emilia Kabakov, London school children, and young refugees.  The sails, designed and painted by participants following workshops set by Ilya and Emilia Kabakov, bear messages: “Peace”, “No Pollution,” “We Work Best Together”, “Fish Have Rights Too”.  Others are pictorial:  a hand reaching out, fish swimming in a sea without plastic, a home under the sun, endangered species running free.

On Saturday, which was World Clean Up Day, a group of primary school children who had designed sails equipped themselves with rubber gloves and binbags and collected the rubbish from the Thames Path and the foreshore around the Ship.  Some of them have also organised Clean Ups at their school and are determined to run them regularly – inspired by their work on the Ship, and by having met Lilly Platt of Lilly’s Plastic Pick Up, one of the young Ambassadors for the Ship.

Saturdays’ Clean Up was led by the foundation Art, Action, Change which is dedicated to creating positive change in society through arts with a focus on education and empowerment of children, and who, alongside The Kabakov Foundation and Totally Thames, brought the Ship to London.  Also present were members of Oceana UK, who spoke to the children about creating conservation areas in the sea free from fishing, and Green Teen Team, who introduced the kids to the concept of endangered species within the UK.  Connections have been made that will be maintained, spreading the messages of the Ship of Tolerance further and further. 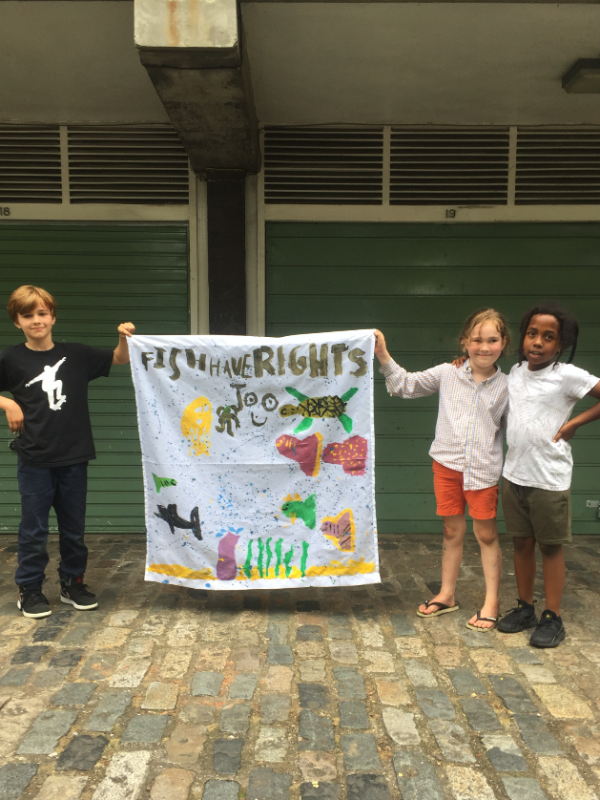 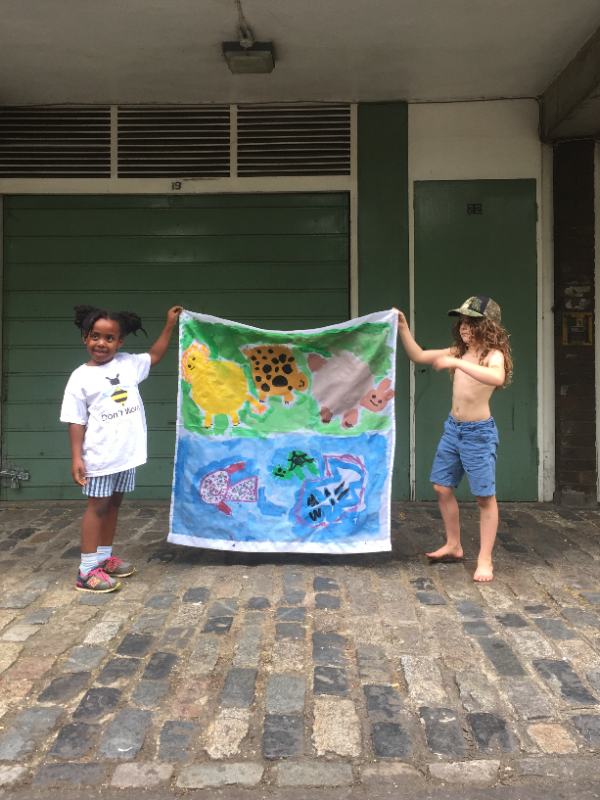 We’re accustomed to politics in art.  We recognise Picasso’s Guernica and Keith Haring’s protest figures, we’ve trodden on Ai Wei Wei’s porcelain pumpkin seeds, and lost ourselves in Ilya and Emilia Kabakov’s works that draw on the visual culture of the former Soviet Union to address ideas of utopia.  Climate politics in art is newer, but gaining traction: Olafur Eliason is currently the headline exhibition at the Tate Modern.  The Ship of Tolerance, however, did not necessarily set out to be ‘Climate Art.’

Ilya and Emila Kabakov launched the first Ship 15 years ago in the desert, in Egypt. The sails were painted by children from the town of Siwa on the Libyan border, and the ship itself was built by teenagers from Manchester, and their professor in carpentry, David Harold.  Emilia’s aim was to introduce people who wouldn’t otherwise have met, and for them to realise that their similarities were greater than their differences.  Tolerance and cooperation were learnt through playing football and working on the Ship together – and lasting, cross-cultural friendships were made.  “There is so much hate in the world,” says Emilia.  “It is only by spending real time with each other that we can improve that.”

Since then, the Ship has been reproduced in Venice during the 2007 Biennale, St. Moritz for the Art Masters Festival where it won the Cartier Award for best art project of the year, the UAE for the Sharjah Biennale in 2011, in Havana, Cuba, where Emilia succeeded in bringing young American musicians to play in a concert with Cuban musicians (she received a barrage of hate mail for it) in Miami for Art Basel Miami 2012, and then more recently in New York (where Emilia engineered bringing Cuban children) Moscow  (the Cuban children travelled there, too) Oslo, Zug in Switzerland, Samara in Russia, Rostock and Duren in Germany, Capalbio in Italy,  Rome, and Chicago.

Many of the sails address “Friendship, togetherness, religious and racial tensions, wars and violence,” explains Emilia, recounting some of her conversations with children over the years: the Haitian girl who said how important it is to intermarry, so that no one has different skin colour, the little boy who wanted to give parents the chance not to fight.  The increase in climate as a subject matter is, Emilia points out, “Instigated by adults’ conversation.  But it is clear that many of the children are frightened of the future.”  To allay this fear – and hopefully improve our future – children, and all of us, need to feel that we are doing something positive, together. 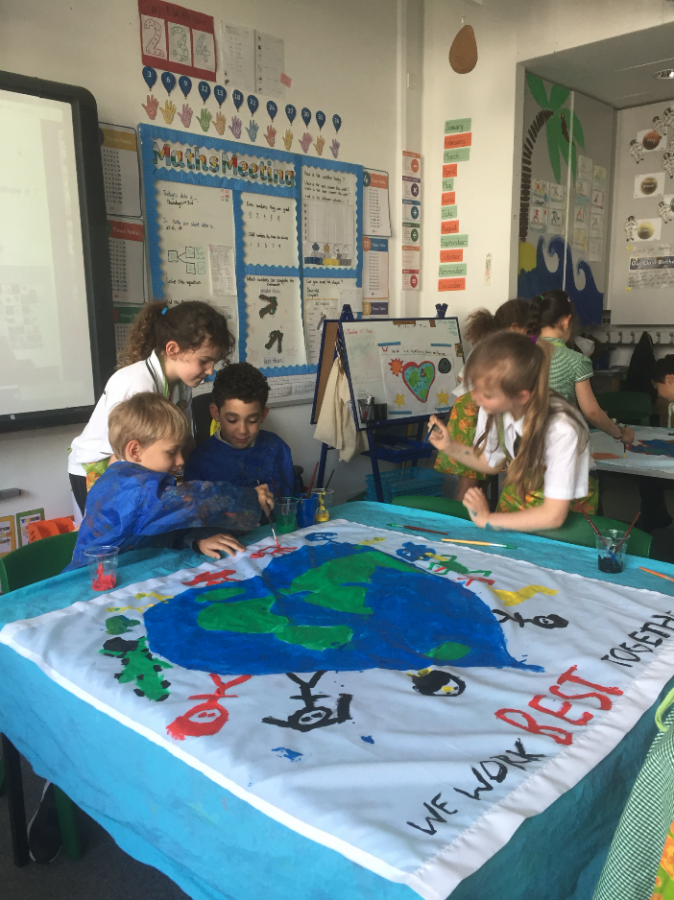 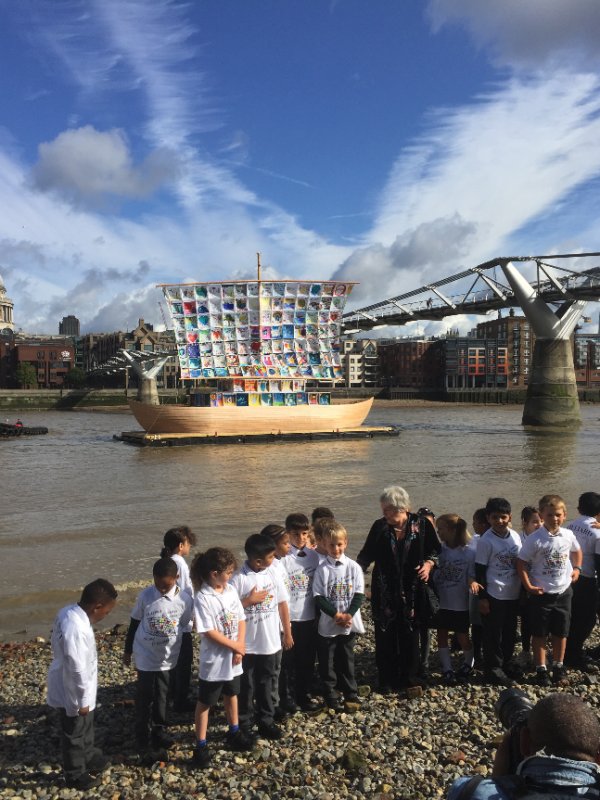 Images: (L) A workshop at Ark Atwood Primary Academy; and (R) the children in front of the Ship of Tolerance with Emilia Kabakov.

Why we need the Ship of Tolerance

The Ship of Tolerance arrived on the Thames at a time of political turmoil, when parliament and it’s proroguing was mobilising most of the country’s attention.  “There couldn’t be a better time to open a discussion about tolerance,” remarks Nadja Romain of Art, Action, Change.  But we are also facing a Climate Crisis, which, Nadja continues, “Can only be tackled by collaboration on a major scale.  Somewhere along the line we adults have lost a sense of togetherness that we need. Children aren’t judgemental – society is.”

“Working with Emilia on the Ship of Tolerance is an opportunity for children, whose opinion on big topics is often ignored, to be heard,” explains Ludovico Barattieri di San Pietro, another Young Ambassador who worked on the Venice Ship as a child, and this summer ran workshops for the London Ship.  Having run workshops myself and then witnessed those children seeing the Ship for the first time, realising that their sails are being displayed for the whole world to see, I can attest to the significance of ‘being heard’.  “We want to encourage children to stand for the right things – the things that they already believe in, such as trees and the seas and whales and bees, and their fellow humans – rather than training them to fit into a system that has so many flaws,” explains Nadja. 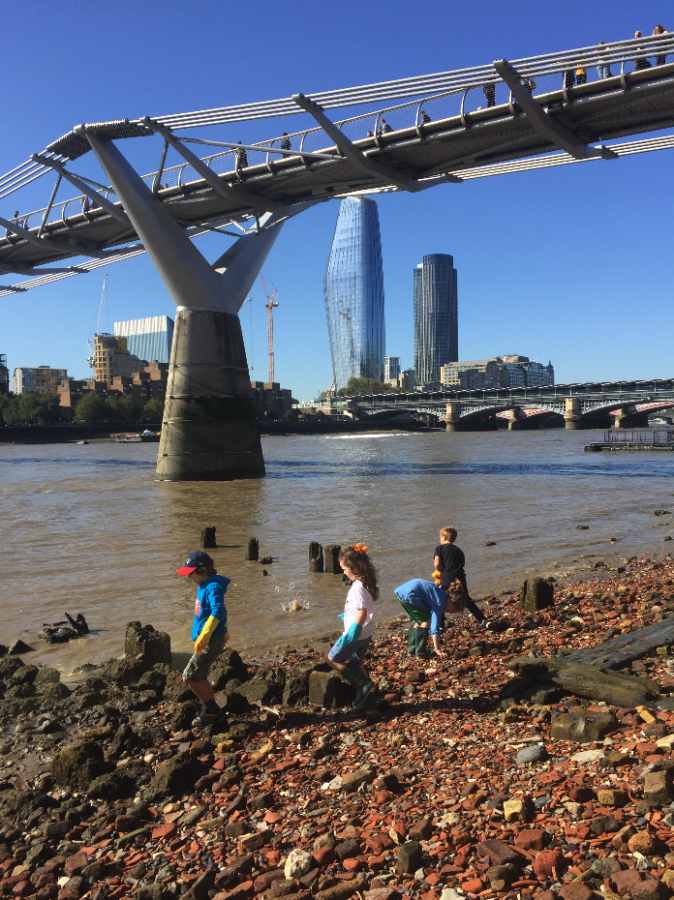 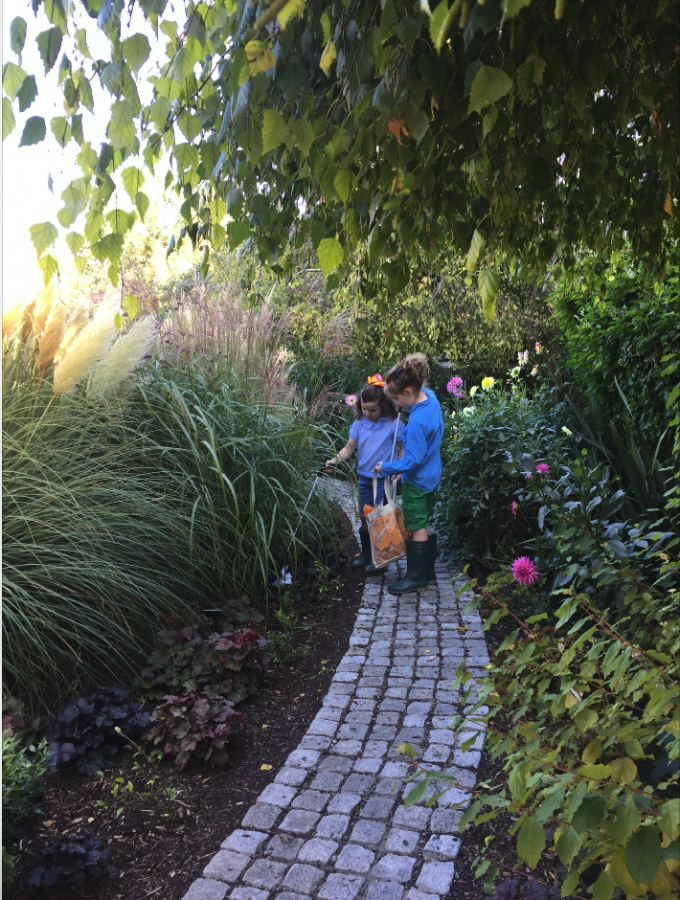 It’s clear that art has a leading role to play in climate politics: the V&A have acquired some of Extinction Rebellion’s artefacts, a group who have successfully being employing visual impact since they formed.  The Ship of Tolerance, too, has real power: “I’ve witnessed, first-hand, how an art project can transcend art altogether, and become a movement,” declares Ludovico, of his experiences with the Ship.  “Art is culture – and written into the history of human development,” says Emilia.  “It’s the responsibility of artists, writers and poets to continue.”

Emilia leaves in her wake not only children who have discovered the force of agitprop and are making protest banners and decorating school corridors and their bedrooms with posters declaring ‘No Single Use Plastic’, ‘Community Matters’ and ‘Save the Bees’, as well as organising Clean Ups and reorganising the planting of school gardens to better appeal to certain species, but also foundations who have worked with her, and are inspired by her to just keep going.   Art, Action, Change’s next project is WeRTheFuture, a platform for children and world-leading experts to learn from one another and collaborate on current and future global issues.

As for the Ship of Tolerance, “I hope that will continue its journey for as long as it is needed, drawing attention to the hopes and fears of generations to come,” remarks Emilia.  Go and see it on the Thames while you can.  It’s important – and uplifting in all the messages it carries.

Read our tips on how to inspire your kids to be green.

See Fiona’s recommendations for eco-friendly activities to do with children.

Andrés Acosta: The Story Behind My Sustainable Look For The GCFA, Italia 2020
Women's March 2019 - Everything You Need To Know
Modern Slavery Stops Here
Wool Week: Getting Immersed in the Wool Supply Chain