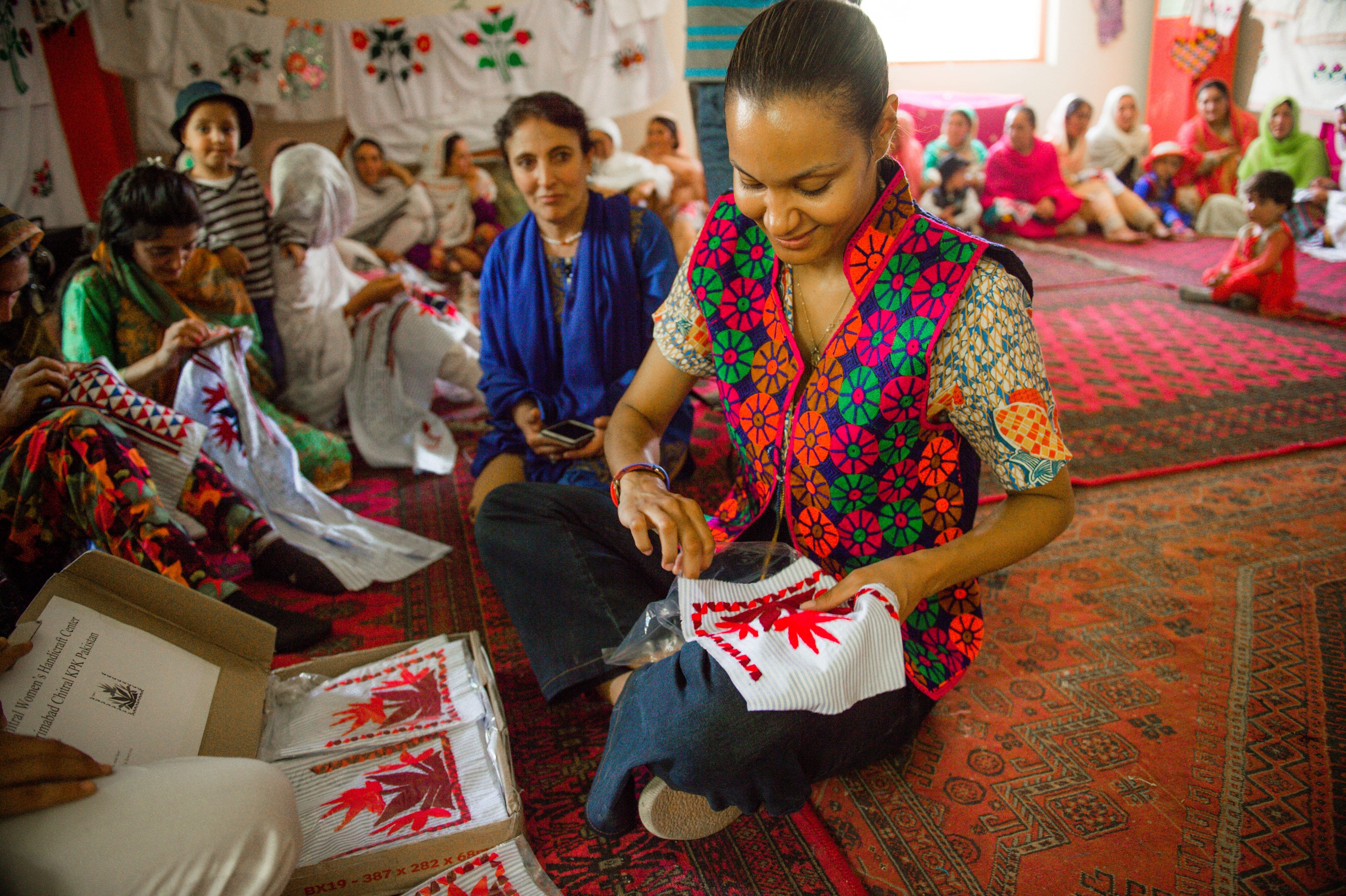 Stella Jean: The Story Behind My Sustainable Looks For The GCFA, Italia 2020

Italian-Haitian designer Stella Jean tells us more about her two ‘Made in Italy’ looks, worn by the author and publisher Tamara Pizzoli, and the Italian musician Syria.

Stella Jean’s work is characterised by a deep-seated belief that fashion can be a force for good in the world by driving social development through meaningful collaboration. A journey that began in her home country has since taken the Italian-Haitian designer to Benin, Syria, Pakistan and more, working with artisan collectives to transform their cultural heritage into an opportunity for ethical employment and cross-cultural partnerships.

For previous years of the Green Carpet Fashion Awards, Jean’s looks have been a testament to sisterhood without borders, poignantly connecting women in Italy and afar. Her 2018 designs, worn by Chiarra Francini and Jean herself, combined the work of Umbrian artist and artisan Ambra Lucidi with the skills of female artisans in Benin. In 2019, her look for Lea T was hand-embroidered by women from the Kalash community from the remote mountaintop Chitral district of north-eastern Pakistan, before being tailored in Umbria by female seamstresses.

Jean’s creations prove that despite thousands of miles of distance, dozens of female artisans can join forces to create pieces that honour and preserve traditional handicraft and re-establish its place on the modern marketplace. Yet this year, while the ethos behind the two looks she created remains largely the same, it has been interpreted rather closer to home, as a powerful collaboration with Italy’s own artisans and a defiance against the hardships 2020 has presented for them.

We spoke to Jean about her two entirely ‘Made in Italy’ dresses created for the digital green carpet, and how, through fashion, cultural heritage can become a powerful vehicle for social change.

The GCC challenge and initiative gives consumers, who far too often underestimate the power they hold in influencing fashion companies, the opportunity to browse and look beyond the territory of giants and have a glance at the interesting and vast panorama of independent brands from various cultural backgrounds. These companies do not have a seat at fashion boards, but they narrate so much about their own stories and the true face of our country through their work, passion and sacrifice. Supporting these freedom fighters of artisanal resistance means rescuing and preserving common cultural heritage from extinction. This is why I consider these initiatives to be of vital importance.

Can you tell us about the look you have created for this year’s Green Carpet? What is the story behind the materials used for the look; how did you source them?

The two looks, made from upcycled men’s shirts, are born out of resistance; the resistance to the temporary but historical closures throughout Italy this year. Together with the artisans of the regions of Umbria, Marche, Abruzzo and Latium, we have creatively responded to an immobility that does not belong to us, and to which we have not surrendered. We wanted to start again from our history, from our territory, and from our skills, reacting to inaction with the incredible strength, determination and wisdom found in the hands of these women. We wanted to rebuild a healthy fashion system, safeguarding the cultural heritage of our territory, starting with the artisans with whom we began this journey.

The materials have been locally sourced in our archives and craft shops. The two shirts were hand-painted and embroidered by hand in Italy; the ingredients are few, of high quality and homegrown. The concept is simplicity, not simplism. We have done better, with less. We’ve rearranged our priorities and learned to breathe again, in sync with the rhythm of the earth and sky.

You frequently work with craft communities around the world on your designs. Did you collaborate with a specific group of artisans on this project?

The artisans with whom I collaborated on this project are the same ones with whom I initially began in Italy. It’s important to understand that in this specific moment, even the largest brands have experienced tremendous difficulty, and we can only imagine the problems that these artisans have had to affront in order to not close their businesses for good. There is significant cultural heritage in our country that is at risk and therefore it must be safeguarded at all costs.

Why is it such a big part of the Stella Jean brand ethos to support artisan communities all around the world, and preserve traditional craftsmanship?

I owe my debut to them and their deep-rooted trust. They have never hesitated to support me and to impart knowledge and techniques to me that have existed for centuries. They displayed immense generosity, and at the very least I must reciprocate that by safeguarding their traditions and work from oblivion, as well as the dazzling lights of mass production.

Fashion has to make sense beyond its aesthetic, and it can evolve into an instrument of counter-colonisation that could restore equilibrium between different symbols, stories and worlds. Thus, it becomes a vehicle for, and expression of, economic, social and ethical growth and enfranchisement.

My project, Laboratorio delle Nazioni (Labatory of Nations), is a reflection of this idea. It is an international cooperation which aims to promote cultural heritage as a driver of sustainable development, and while focusing on what occurs when fashion becomes a tool for this. Despite the thousands of miles of distance that may lie between them, countless hands of women artisans in different countries work together in an ideal Laboratory of Nations. Each collection is the result of the construction of a cultural bridge between Italian design and the artisans of a particular low-income country during each different season, including the countries of Haiti, Burkina Faso, Mali, Pakistan and others in South America, Africa and Asia. In creating them, these women are building their own economic autonomy, preserving their own traditions while simultaneously gaining a small seat at the global market table.

What is one thing you have learned from designing for the Green Carpet Challenge this year?

The incredible ability to adapt, which is part of the spirit of survival that characterises human beings. What touches and moves me most with each edition is the great human capacity that coherently supports the project and infects every aspect of it.

Nothing that is the mere result of following the latest trend or, worse, just a clever marketing ploy, will ever be successful. Moreover, projects rooted in inauthenticity equate to acting in an inhumane, reckless way. Through my own personal experience, what I feel the need to state and share is that in cooperating with different cultures, it is essential to remember the following guideline: ‘Nothing about them without them.’ Every initiative should be a true exchange of know-how which, through its activation, generates a sense of self-sufficiency in local populations through the creation of direct employment, businesses, and training related to these recovered competencies and cultural resources.

Additionally, the countries benefit from a wealth of international promotion featuring positive imagery of the land, which assists in attracting further investment and triggers tourism, and thus commercial interest, in many remote geographical areas that remain unknown or perhaps are only known for the wrong reasons.

This activity is in complete opposition to the long-held welfarism approach, which to date has proved to be completely inefficient. One of the main goals of integrationist contamination is promoting a cultural crossover in which no identity is ever compromised. It is not charity. It is serious work and cooperation.