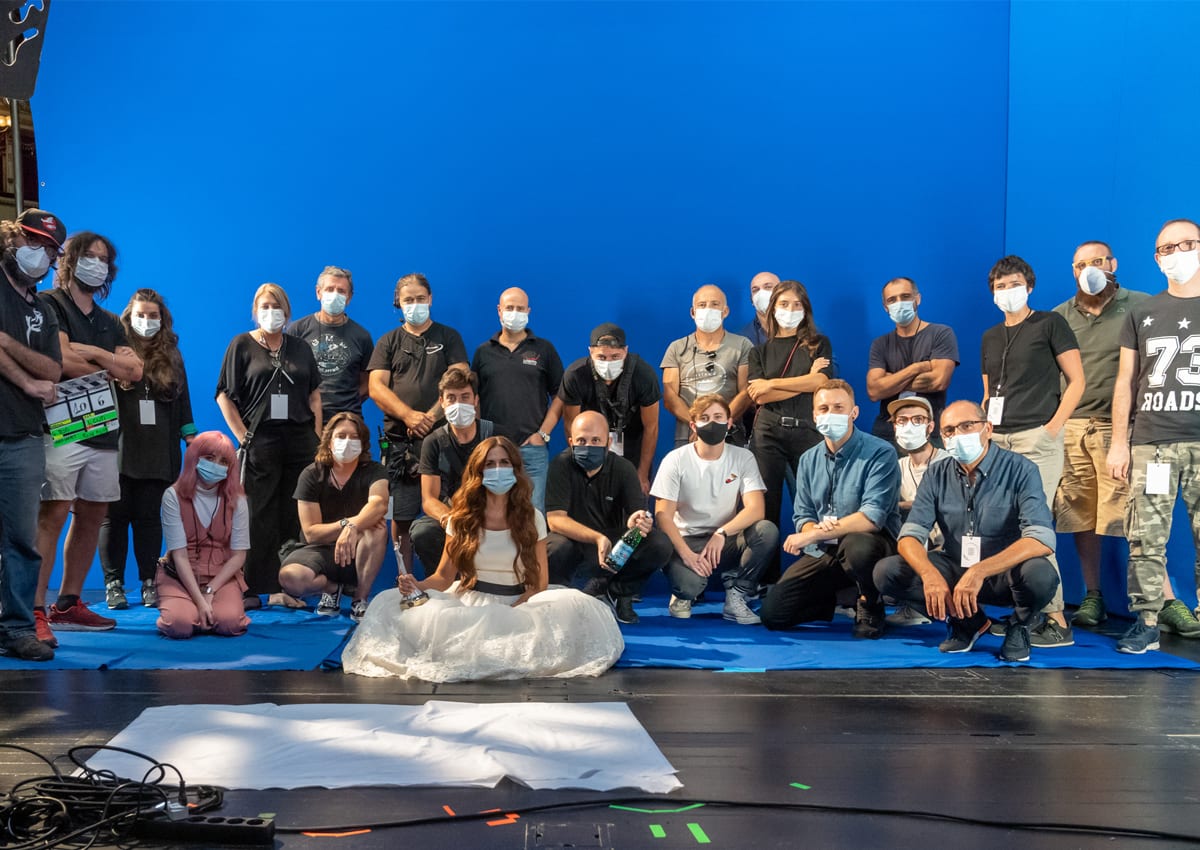 Image: The whole crew backstage at the La Scala theatre in Milan during filming in September, Credit: Mimmi Moretti

The Green Carpet Fashion Awards 2020 will combine cinematic footage with augmented reality, visual FX and hologram technology for the first virtual event of its kind. Ahead of the global premiere on October 10th, sustainable fashion writer Megan Doyle speaks to director Giorgio Testi, NorthHouse Creative’s Tom Bairstow and ARHT Media’s Larry O’Reilly about how the production came together, and why going virtual can help save the planet.

When life came grinding to halt in March, it seemed like all plans for 2020 were abruptly cancelled. Few could fathom safely hosting a dinner party, let alone a huge award ceremony, a task Camera Della Moda Italiana (CNMI) and the Eco-Age team faced as they began planning the 2020 Green Carpet Fashion Awards (GCFA).

Since 2017, CNMI and Eco-Age have hosted thousands of guests at the La Scala theatre to close Milan Fashion Week with a gala that celebrates disruptors and innovators in sustainable fashion. This year, while the premise is largely the same, the presentation couldn’t be more different. Blazing a trail for virtual award shows, the GCFA is fusing augmented reality, holograms and virtual FX to transform La Scala into a terrarium, where a special line-up of guests will perform, present and receive awards. Alongside this, attendees will appear on the world’s first digital green carpet, which celebrate the best in sustainable glamour from the event over the years.

This edition of the GCFA will set a new standard for award shows by breaking the mould and offering an ambitious, sustainable way forward. “This year’s GCFA speaks volumes about the miracle and magic that happens when we collaborate,” says Livia Firth, founder and creative director of Eco-Age. “Someone in our team knew someone, who opened one door and then another and before we knew it, we quickly went from a physical event — to believing we wouldn’t have one at all — to doing an event in a completely revolutionary way.”

Themes of togetherness and rebirth have been central not only to the event itself, but to the process in which it has come together. Conversations between Pulse Films, NorthHouse Creative design agency, the hologram creators at ARHT Media and Eco-Age began back in May to transform the event into a first of its kind digital experience. “We came up with this crazy idea,” says Tom Bairstow, founder of NorthHouse Creative. “Livia bought into it, and we’ve gone full-force collaborating through it ever since. The thing that’s so exciting about the show is that it’s a prototype — it’s completely original.”

“It’s very much a ‘COVID-era’ event because it wouldn’t have happened otherwise,” explains Giorgio Testi from Pulse Films, who is directing the GCFA. “It’s a result of the moment we’re living in, but everybody brought their own expertise to the table and we challenged ourselves to the next level.” Testi has worked on projects that blend physical and virtual worlds before, but was up for the task of creating something entirely unique with ARHT Media and NorthHouse Creative. “It’s been a learning process — we’re still learning how to combine all these different elements organically — but it’s been exciting,” he says.

After months of planning, the team from Pulse Films shot on location in Milan for three days, one of which was spent filming presenters like Carlo Capasa (president of Camera della Moda Italiana), as well as Livia and Colin Firth, who were there in person. Hologram experts ARHT then beamed both live and pre-recorded holograms of celebrity guests onto the set from around the world to interact with the presenters in Milan. Next, the Pulse team spent two days filming La Scala, creating footage that would become the backdrop for NorthHouse Creative’s virtual terrarium, which is set to cover almost every inch of the theatre’s grand interior in real-time 3D graphics of foliage. “This is going to be such a unique and impressive award show because it’s a narrative story in a total virtual world that has never been created before,” says Larry O’Reilly, founder and CEO of ARHT Media. “One thing is for sure, it will be the most original-looking awards show to date.”

The GCFA will be only the second public appearance of ARHT Media’s augmented reality holograms. “We generally work with government leaders or titans of industry to overcome time and geography, getting people to a meeting or presentation that they wouldn’t be able to get to otherwise,” says O’Reilly. The increased demand for their unique service has enabled ARHT Media’s technology to evolve rapidly in recent years, to the point where it is almost undetectable to the human eye. “Whenever we’re hired to do anything, our clients are asking us to present them in a way that the audience doesn’t know they’re not physically there,” says O’Reilly. “We’re capturing people in 4K resolution at one location and beaming them anywhere else in the world, life-like and live, with no visible latency. You get all the natural movement and if you combine that with a discussion, your brain tells you that they’re in the room.”

For NorthHouse Creative, developing La Scala’s terrarium foliage has been about finding the balance between realism and fantasy. “We don’t want it to feel too digital, we want to feel like it’s been transformed in a really organic way,” says Bairstow. “But we also wanted to create something that was stylised, had a bit more character to it, and added some magic to the event.” To achieve this, his team has used a game engine called Unreal, a leading rendering tool in the gaming world, which created the immersive graphics. The platform renders in real time, meaning the NorthHouse Creative team were able to create graphics in three weeks of post-production time, a process which would usually take months if they had used a standard cinematic VFX tools.

While the pandemic has forced businesses to embrace technology, they’re discovering that the possibilities of a virtual event are limitless, offering far more creative freedom than ever before. “People are facing the challenge of how to create a really stunning show for broadcast,” says Bairstow. “Until this point, the technology has existed but people haven’t been using it because there hasn’t been the need. As soon as it’s put into practice and people can see it being used, I think many more things are going to start happening along these lines.” One of the clear benefits of hosting a virtual event is the ability to reach a far greater audience than just the seating capacity of a venue. “The GCFA is limited to about 1800 people when it’s an in-person experience in La Scala, but we expect millions of people to see this because we’re bringing it to a much bigger audience,” says O’Reilly.

Of course, the biggest winner of all this is the planet. In producing the GCFA, NorthHouse reduced their team from 10 people to three who travelled to Milan, while ARHT conducted their part from the company’s headquarters in Toronto, sending celebrities to the company’s outposts in New York, London and LA to be captured as holograms and beamed over to Milan. “We’re doing the same amount of work but with less people, so from a production point of view, it’s been the most sustainable project that I’ve done,” says Testi. As well as being on location in Milan, he has been directing guest appearances over Zoom, working with talent and local videographers around the globe to capture content without travelling. “If this was happening in a non-COVID time, I would have been flying all over the world to South Africa, LA, New York, Shanghai — I would have spent more time on the plane than filming,” he says. And that’s just the teams involved. When you take into account the carbon emissions created by guests flying from around the world to attend events, this virtual award show is saving thousands of tonnes of CO2 from entering the atmosphere.

“Reducing carbon footprint is very measurable, because we know on a per-person basis how much carbon dioxide people use to fly around the world,” says O’Reilly. “If we help to eliminate the need for that, the benefits to the planet are huge.” Camera Nazionale della Moda Italiana’s CEO Carlo Capasa said of the event: “Together we must exploit this moment to shape a future for our industry that puts the planet and people at the centre of its business.” Considering the huge reduction of carbon emissions, personnel on site and waste created as a result, the 2020 GCFA is undoubtedly one of the greenest award ceremonies of its time.

With this technology becoming more sophisticated and affordable with every year, it’s only a matter of time until the wider fashion industry fully embraces virtual FX and augmented reality to create more visually exciting, accessible and sustainable events. From fashion weeks to buying appointments, the applications for this technology would revolutionise the industry like nothing before. “I think it’s going to take everything to the next level,” says Bairstow. “This is the start of a whole new way of creating shows.” Eco-Age is boldly leading the pack, and O’Reilly is sure there will be many more following in their footsteps. “You take this technology, pair it with the creativity and glamour of fashion, and you will really be able to wow people.”