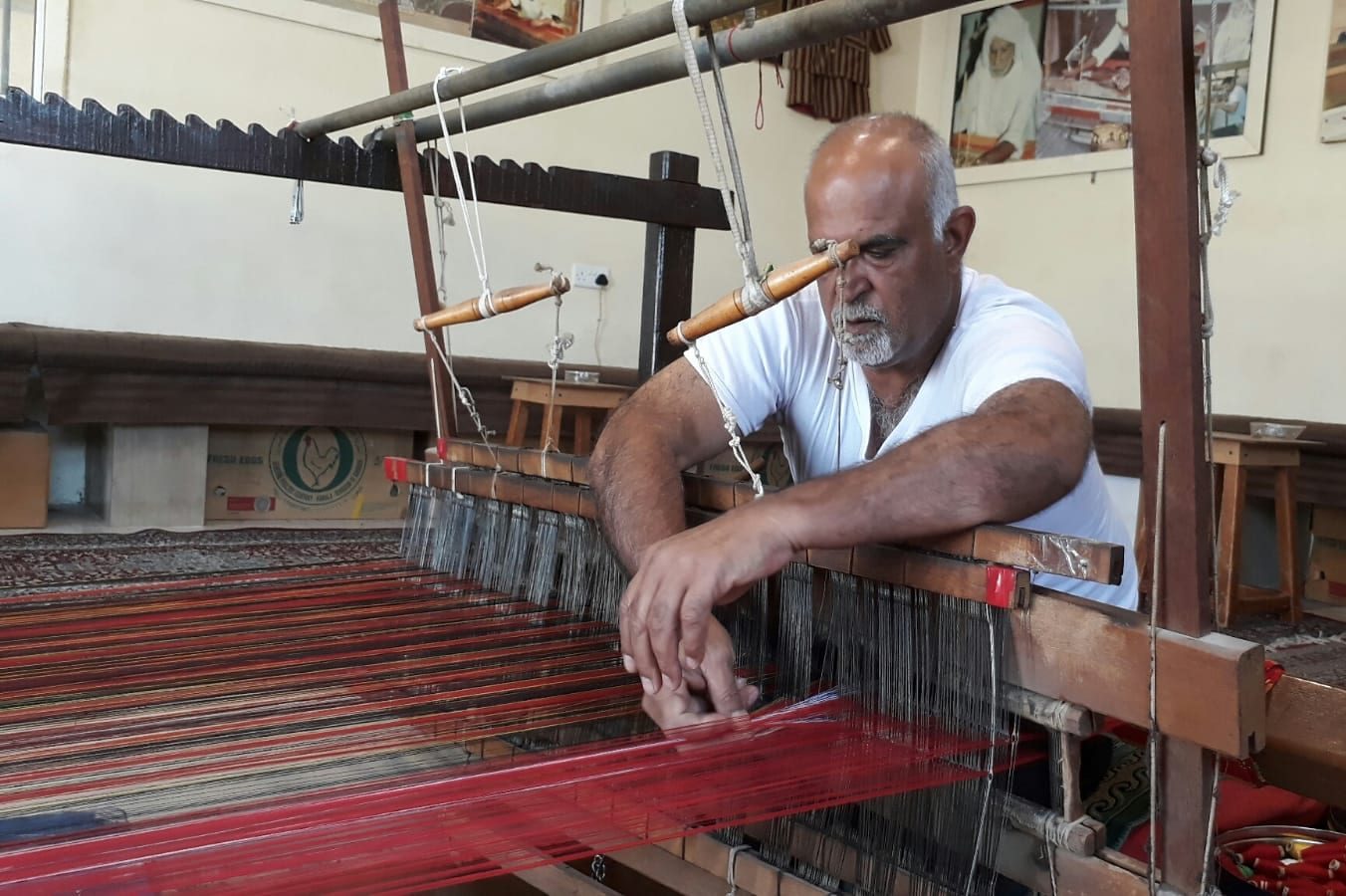 The Art of Weaving in Bahrain

In a small village in Bahrain stands the last operating weaving factory. Saja Elmishri spoke to one of the remaining artisans from the Bani Jamrah community to discover how traditional craftsmanship is inspiring a local movement grounded in heritage and art.

Bahrain, a country based in the Middle East, is famously known for its oriental image of its oil rich country and tropical weather. But little is known of the textile heritage and weaving industry at the heart of Bahrain and the Arab world.

A thriving nation that celebrates the art and creative industry of Bahrain, Bani Jamrah, originally named after weavers, used to be a village known for its textiles. However, due to effects of globalisation and imports, today, according to locals, there is only one remaining manufactory operating in Bani Jamrah – Naseej factory.

Noor Nooruddin, a freelance writer based in Bahrain and communications coordinator for Fashion Revolution, said: “Textile in Bahrain has always been a novelty thing and a sense of pride that is part of our history and heritage.” Bahraini textiles aren’t integrated well enough into the market of where locals shop and spend most of their time, most locals tend to outsource and import textiles or fashion as it’s seen as more exclusive if you do so.”

“There is a sense of urgency that we need to support this craft before it disappears as it is part of our history and we need to find ways to keep it,” Nooruddin added. 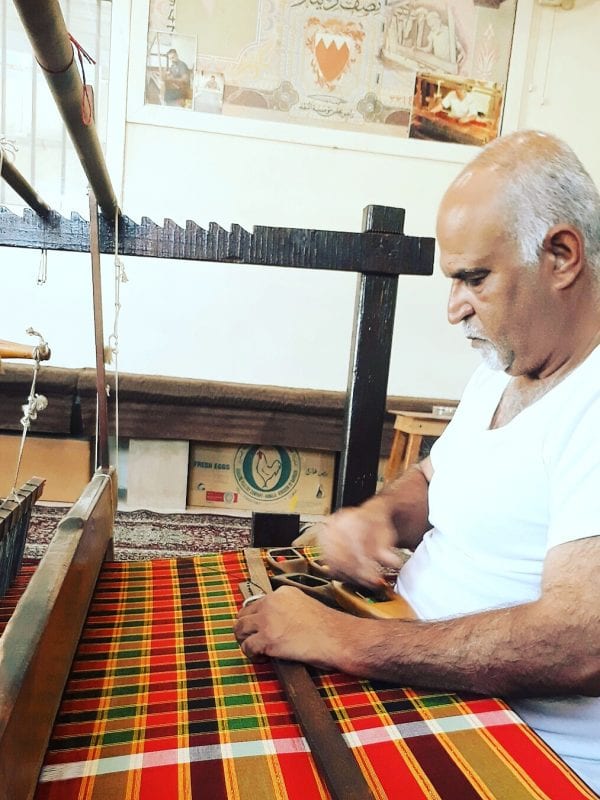 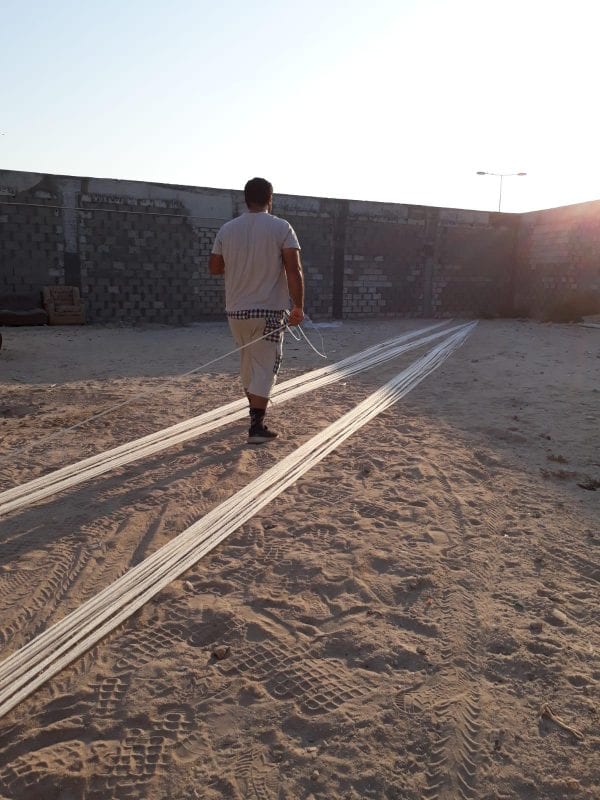 For Mhairi Boyle, a Scottish textile designer based in Bahrain, there should be more awareness in the region as to how  “you can source things locally”. “The skills of the weavers need to be showcased further and they need to see the village of where art comes to life,” Boyle added.

When asked what people should know about the art of weaving in Bahrain, Boyle replied with “you can source all of your fibres, fabric and materials here, from the weavers, there is no need to import as the creative community of weaving already exists. You have to find ways to pass this skill further, either by offering workshops in the village so people can try this, do a series of workshops to understand how they can get involved and to understand his heritage craft that exists in Bahrain.”

It is evident that there is a strong scene of creativity and textile history in Bahrain, but the challenge remains as to how locals can engage with this craft further. For those already working with the craft, it is both the tradition and inspirations of past generations that has compelled them to continue to learn the skill of weaving. It is this heritage that can hopefully see weaving become part of a future sustainable fashion movement.

I spoke to one of Bani Jamrah’s most prominent weavers, Mohammed Saleh Abdul-Ridha Jaffar, to better understand the importance of weaving in Bahrain. 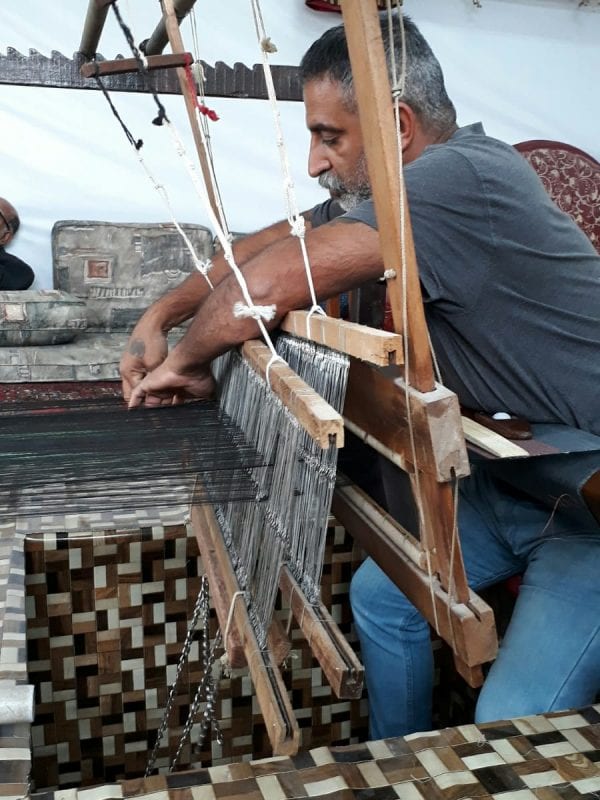 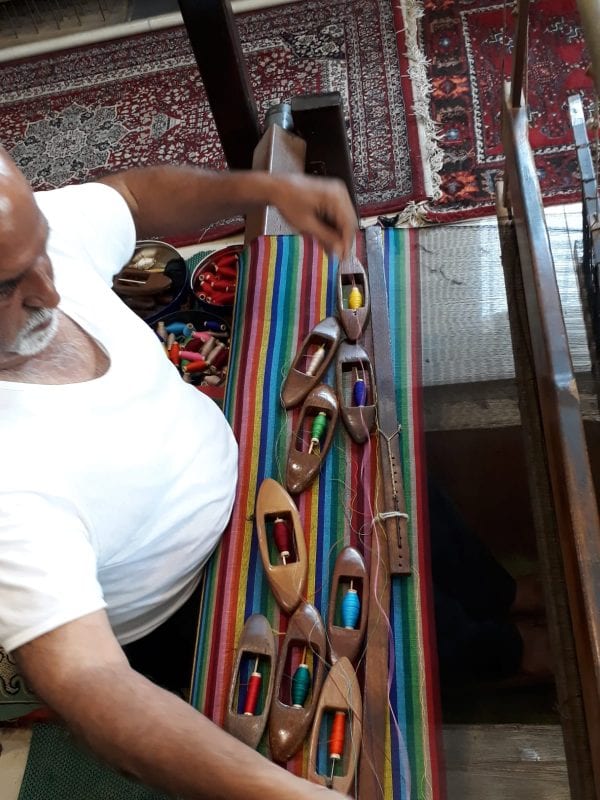 What does the textile industry in Bahrain look like?
It is an artwork, belonging to the arts, a handicraft. A weaver, through making textiles, creates aesthetic artworks that are unique and non-replicable.

What woven materials do you specialise in or produce?
First, the loom and its parts, including its wheel are all handmade with wood. The threads we use were previously imported from India, and we would dye them ourselves by hand. Today, our sources are more diverse, and we import threads from China and India, and some natural fibres like cotton from Egypt, as well as Scottish wool.

What makes your woven techniques special and different to anything out there?
We make pieces with traditional patterns known to Bahrain and our craft over the years. Some of the most prominent and coveted patterns are the muqallam—a pattern that employs straight lines, and another called mubakkar—with a repeated square pattern.

What distinguishes Bahraini weaving the most, our art and craft, are the patterns. Some of the most important are traditional patterns, such as the bridal piece (al-ridda) which uses a unique pattern called al-saib’i. Other patterns employ different stripes and colours to denote function. For example, some are commonly used in jalabiyyas.

Has the weaving industry changed over the years in Bahrain?
Until this day, weaving in Bahrain as a practice has retained its unique character, one that is borne out of a deep heritage. The changes that have happened in recent years are mostly on the ‘use’ end of our textiles, which has evolved with the changing times.

What are the effects of weaving in the local community?
Today, there is a growing movement in returning to and revival this craft, due to growing interest in craft and heritage art and making. 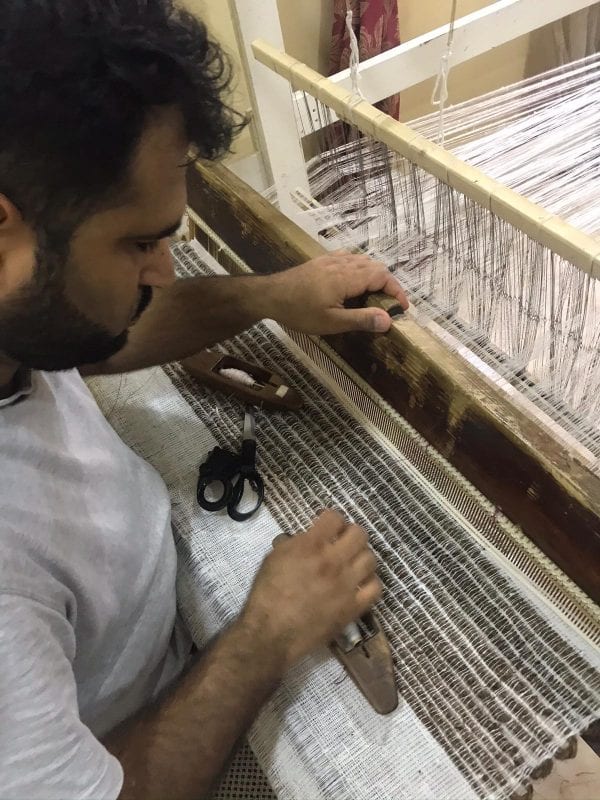 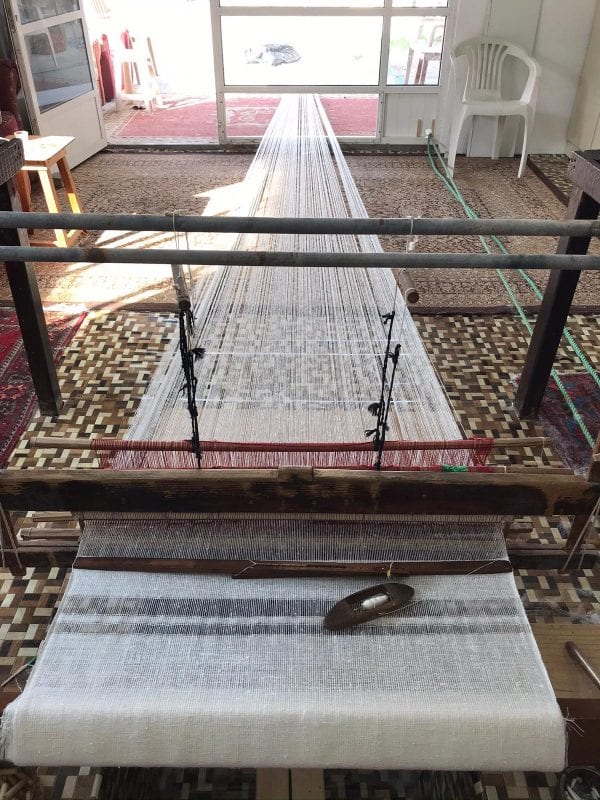 What does your craft symbolise in terms of history of Bahrain and its history?
Weaving in Bahrain symbolises origin, ancient history, and the weight of our civilization and our ancestral Dilmun lands. It is this land that we have descended from, this great civilization of Dilmun, and we have passed on this ancestral art and craft, father to son, father to son.

How did you learn and how are you able to pass this on?
I learned the craft alongside some of my siblings from my father, may he rest in peace, and I have taught the craft to my eldest son. I hope to see my grandchildren learn its techniques, form, and patterns and excel in it as a craft.

How are your textiles woven skills being supported in Bahrain and beyond?
I express my deepest gratitude for the Bahrain Authority for Culture and Antiquities for its significant and consistent support. Looking into the future, we hope to attract international interest for the Bahraini art of weaving, perhaps through participating in global trade shows and fairs. This could also serve to encourage tourism to Bahrain as a local attraction as a natural part of its heritage.

The Bani Jamrah weavers are keeping the craft alive,  continuing to operate with projects both regionally and across Bahrain, producing beautiful colourful textiles from a wealth of knowledge of traditional weaving practices.

Wardrobe Crisis Podcast: Clare Press Meets Katharine Hamnett
Why Fashion Brands Are Today's Colonial Masters
The Duchess Of Sussex On Global Feminism
Why Plastic Is A Wealth, Not A Waste