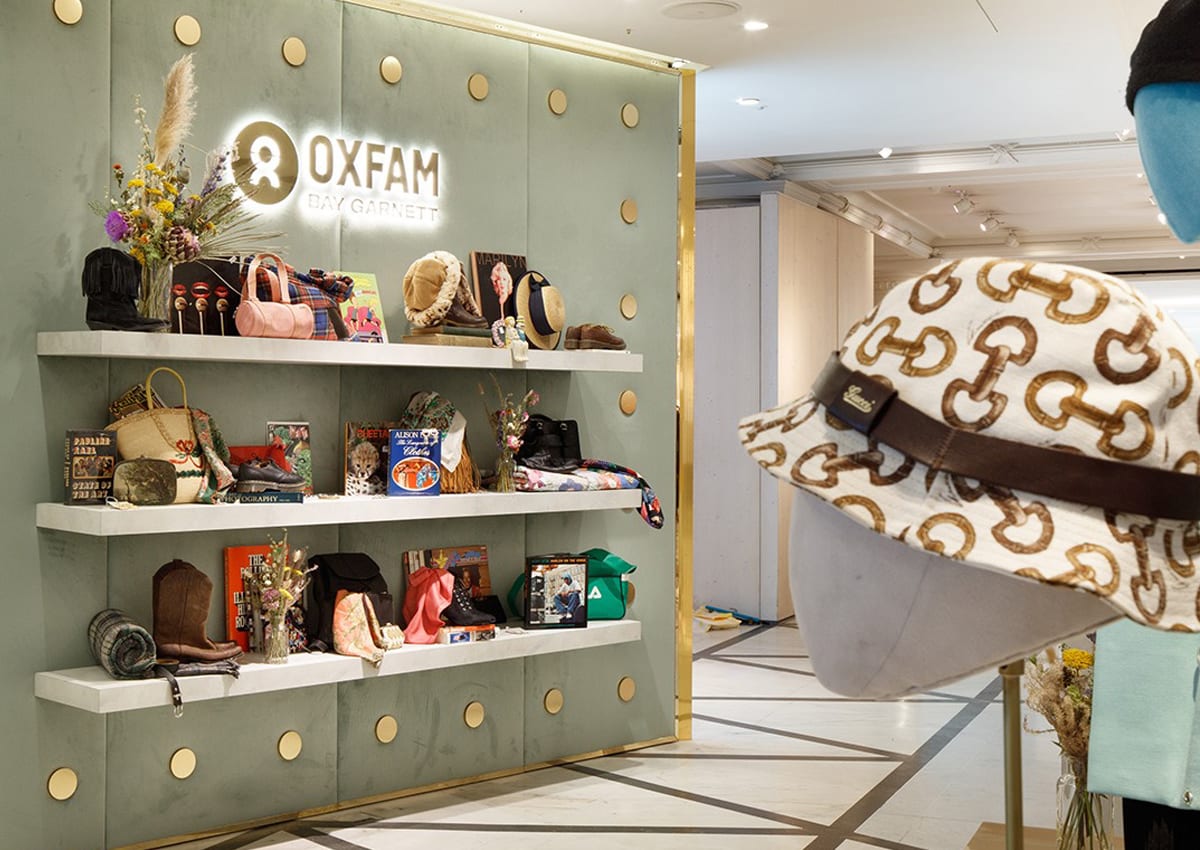 The Rise Of Charity Retail: How To Make Sure You’re Thrifting Responsibly

With #SecondHandSeptember in full swing, charity shop sales and donations are on the up. But how is the rise in popularity of the humble charity shop impacting communities both in the UK and overseas? In partnership with The Junior Network, Joanna Standley finds out.

We’re over half way through #SecondHandSeptember, and while last year the Oxfam initiative attracted over 50,000 users, this year the hashtag has already increased to over 95,000 posts. At the time of writing, this number shot up by 200 in one hour.

But what does this mean? Surely more people shopping second hand is a positive step in the sustainable-fashion fight and means we, as a community, are doing better? Or perhaps it’s not as simple as that.

The benefits of buying second hand are endless. A report by Waste & Resources Action Programme (WRAP) found that extending the average life of garments by just nine months can reduce the carbon, water and waste footprints of UK clothing by 20-30%. It relieves pressure on already overrun landfills and in turn saves UK councils from spending millions of pounds each year on Landfill Taxes – meaning more money is used on bettering the community.

These are exciting realities that are made even better by the fact there is an increasing demand for second-hand fashion. In the last quarter of 2019, charity retail sales soared an average of 4.4% year on year (YOY) with organisations like Save the Children growing their profit from just over two million pounds in 2018 to almost three million last year. As 2020 forces people to become more aware of their shopping habits, this increase is expected to continue and already, there’s been a noticeable shift towards conscious consumerism. When it was announced non-essential retail could open following the Covid-19 pandemic, the term ‘charity shop near me’ was searched on Google +188% compared to June 2019 – a growth which only continued throughout the summer months.

Yet this rise in popularity isn’t just due to people looking to scoop second-hand goods; charity shop donations are coming in thick and fast too. Lockdown forced many of us to address that bursting-at-the-seams storage cupboard, or finally say goodbye to those stiletto boots we haven’t worn in 10 years. That was certainly true for Cambridgeshire, with The British Heart Foundation reporting that its St Ives store received almost 200% more donations than in the same week the year before. A Lincolnshire charity,  St Barnabas Hospice, also received over ten times the amount of goods than its usual July intake, which consequently resulted in the charity suspending donations 20 of its stores.

Sadly, however, both the closure and subsequent over-saturation of charity shops has also encouraged fly tipping.  So much so that the Charity Retail Association (CRA) issued advice in its reopening guide, stating the dumping of goods – which was often just general waste – poses health, environmental and fire risks. The report suggested that if local councils couldn’t help with clearing up, private waste companies may be needed – but with fees starting at £55 for clearing up to two cubic metres, this would eat into profits. How did giving become so problematic? As a resolve for this, some charities have implemented a booking-in process for donations and in June, the British Heart Foundation launched a freepost service to encourage people to send in their donations.

The supply versus demand issue also poses problems further afield than UK shores. As shops are unable to cope with the influx of donations, more clothes are being sold to textile merchants and making their way into the global rag trade. However, now there’s the risk of the rag trade collapsing due to Covid-19 and the Textile Recycling Association (TRA) has said many countries have halted all UK textile exports. Yes, this could be detrimental to the UK charity sector – this trade generates millions of pounds per year for the industry – but is this such a bad thing for overseas importers?

In 2015, the BBC reported that 70% of donated second-hand clothing in the UK was bought and sold overseas to countries with developing economies. Andrew Brooks, author of ‘Clothing Poverty: The Hidden World of Fast Fashion and Second-Hand Clothes,’ uncovered that due to the resale of used clothing in these countries, textile employment in Ghana decreased by 80% between 1975 and 2000, and Nigeria’s clothing industry has been made near extinct. Jo Lorenz also addresses this issue in her most recent Eco-Age article, discussing how this trade not only causes socio-economic dependency on the West, but also severe detriment to the ecosystems of the affected communities.

On a lesser scale yet still influential, the rise of second-hand shopping may also be damaging to local communities in the UK. As thrifting shifts from a bohemian-perceived habit into an on-trend movement, there’s a threat that charities will capitalise on this increased footfall by hiking prices – albeit for a good cause. However, who is this affecting most?

Many studies have discussed the synergy of social class and second-hand retail, with some highlighting persons from less affluent areas are more reliant on charity stores. Nonetheless, a 2017 report by the CRA, Demos and the Carnegie UK Trust suggests there’s little to no evidence that certain demographics are less or more affected than others – apart from women being more likely shoppers. An interesting analysis by Suzanne Horne in the early 2000s, as highlighted in ‘The ‘‘Quiet Economy’’: An Ethnographic Study of the Contemporary UK Charity Shop‘ and which still seems relevant today, applies Professor Malcolm P. McNair’s ‘Wheel of Retailing’ to charity retail. Horne proposes stores enter the community with low prestige and mirroring low prices, yet after time they progress into the ‘Trading Up Phase’ that can isolate dependent consumers and the argument of profit versus people becomes apparent.

There has also been speculation that the demise of the UK high street has also been affiliated with the mounting popularity of second-hand outlets. As a result of Government-subsidised business rates, it’s true that landlords have an incentive to rent out their spaces to charity organisations, which could be damaging to the independent shops and cafes much needed to recover ghost towns and cities.

Yet despite these claims, the CRA states a mere 4% of retail units in the UK are actually charity stores and apart from the obvious benefits – raising money for parent charities and helping to re-home the 336,000 tonnes of clothing going to landfill each year – these shops are a key component to the UK economy. The ‘Shopping for Good – the social benefits of charity retail‘ report unpacks how charity stores provide everything from vital employment experience for firsthand jobseekers to community rehabilitation programs for ex-offenders. Not to mention the social and mental health gains felt by the 220,000 volunteers propping up the industry.

A census conducted this year by The British Heart Foundation, which asked whether charity retail is and will be more important to society post-pandemic, supports this notion. The results found that 42% of over 2000 consumers think charity shops are imperative for society because they provide employment during a recession, and 71% believe they are an important source of low-price products for those suffering financial difficulty. You can read the full statistics here, they’re actually quite uplifting findings obtained from an unusual and trying time.

So, what’s the answer? Of course, charity retail is massively positive, but it’s all about balance – starting with that of the supply versus demand issue. While the demand for second-hand clothing needs to surpass the supply for the number of textiles heading overseas to decline, this shift in consumer behavior is hugely positive. Initiatives like #SecondHandSeptember are helping that by driving footfall and the rise of ethical influencers is creating awareness and inspiration. Yet at the same time, we need to avoid the gentrification of charity shopping, in order to keep them accessible to everyone.

Long term, it really – and sadly – comes down to capping the production of virgin products through government legislation and demolishing over consumption. Short term, however, you can help! Be sure not to overwhelm charity shops by using platforms such as Depop, Instagram and online consignment stores like Vestiaire Collective, and consult the CRA website for information for traditional charity stores. Find your local shops, stay up-to-date with Covid-19 guidelines so you’re shopping safely and even donate your time instead of your goods, in order to help drive and grow this incredible movement towards sustainable retail.

Trying not to overwhelm your local charity shop? Try Charlie Collins’ top tips on how to extend the lifecycle of your old clothes.

Thrift shopping is a political choice. Hali Brown tells us why.