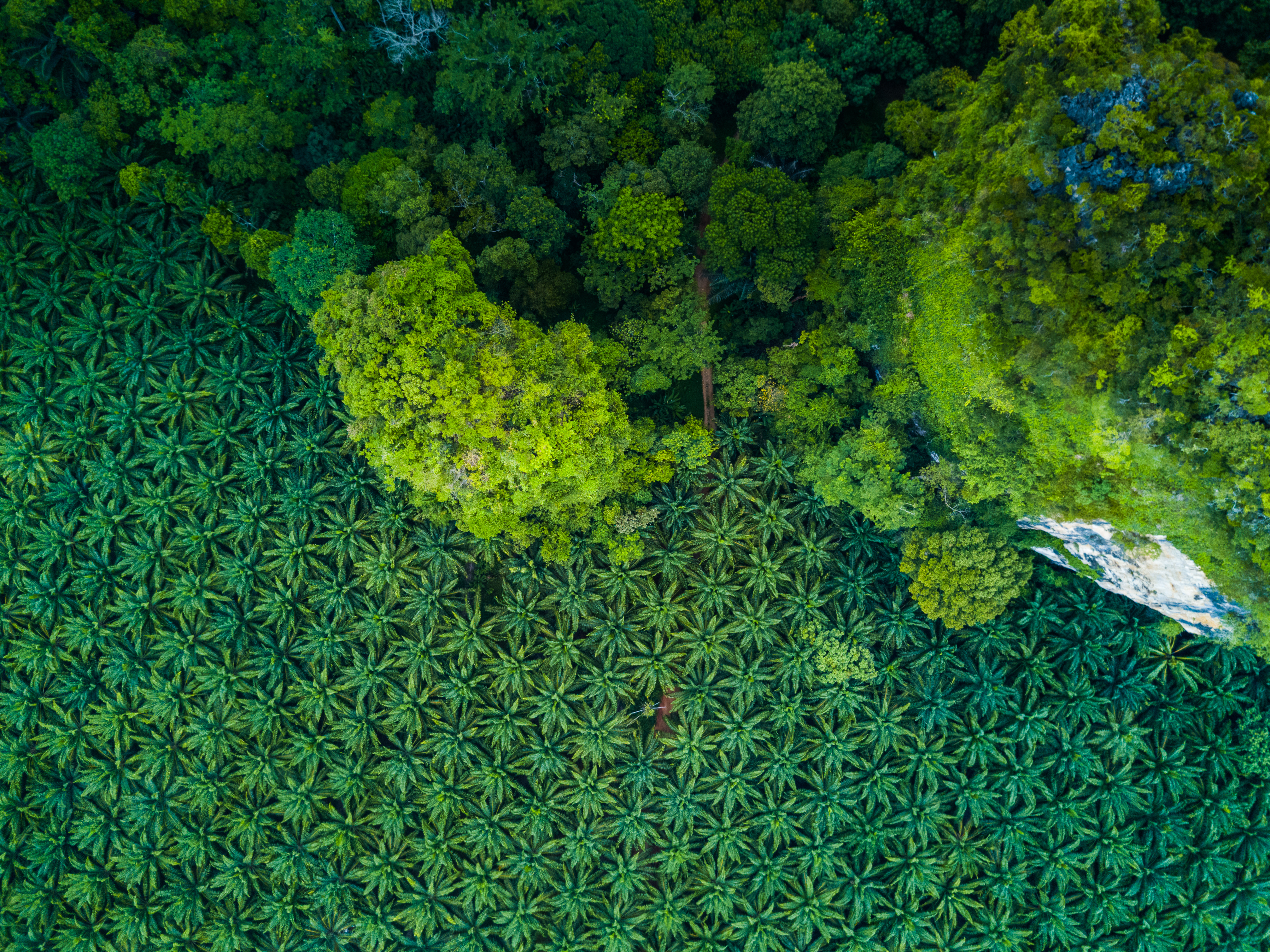 The Truth Behind the Palm Oil Industry, Through the Eyes of a Bornean

For World Orangutan Day and International Day of the World’s Indigenous People, Eco-Age’s Intern, Emma Maxwell sheds a light on the immeasurable consequences of palm oil exploitation, having experienced it first-hand as a native Bornean.

I had an amalgam of an upbringing: born to a native Sabahan mother and English father, I had the blessing and curse of being on both sides of the palm oil industry; with one foot in the western world, and another in the tribal setting of Kudat, Borneo.

When Iceland released their now banned Christmas advert of 2018 starring a homeless baby Orangutan, the UK became that little bit wiser about what they consume. Until this commercial, many of us had no idea what palm oil was and, more importantly, why it’s so problematic. You may be aware that palm oil can be found in your daily use products like food, soap, and makeup; but did you know that you’re also likely to be wearing it?

With fast fashion giants fuelling growing consumer appetites, we’re presented with a cyclical, toxic situation. Palm Oil Detectives concluded that the UK alone has the highest level of consumption in Europe at 26.7kg per capita, compared to 14.5kg in Italy and 12.6kg in Sweden. The environmental and social outcomes of this are something faced immensely by developing nations.

What do Orangutans and Palm Oil have to do with your clothes?

Translating to ‘Man of the Forest’, Bornean Orangutans have faced huge drops in population. WWF found that the population fell by 50% since the 1960s, while 55% of their habitat has disappeared over the last 20 years. The ‘Slash-and-Burn’ process has been instrumental in the 1,000-5,000 Orangutan deaths each year. Orangutans live in and move through trees. With an arm span of 2 metres, they’re able to glide effortlessly through treetops: rarely descending to the forest floor. The ‘Slash-and-Burn’ procedure that’s used to clear land is severely problematic and consists of cutting down trees and burning the ground where they once stood. This makes the ground barren and ready for new planting – although the replanting rarely occurs. In the process, Orangutans are forcefully expelled from their homes onto ground that is set alight. This ultimately leads to cruel and unnecessary outcomes for Orangutans and other wildlife such as pygmy elephants, Sumatran rhino, and other monkeys – which is something I’ve experienced first-hand.

Growing up in Borneo, my first “pet” was an infant pig-tailed Macaque. My brother and I found him abandoned on the side of the road and raised him until he could take care of himself. As a child, this was an extraordinary experience, but the reality was disturbing. We suspected his mother was killed during the deforestation taking place within the 5-mile radius of our house. Sadly this is the new, brutal reality faced by all Bornean wildlife. 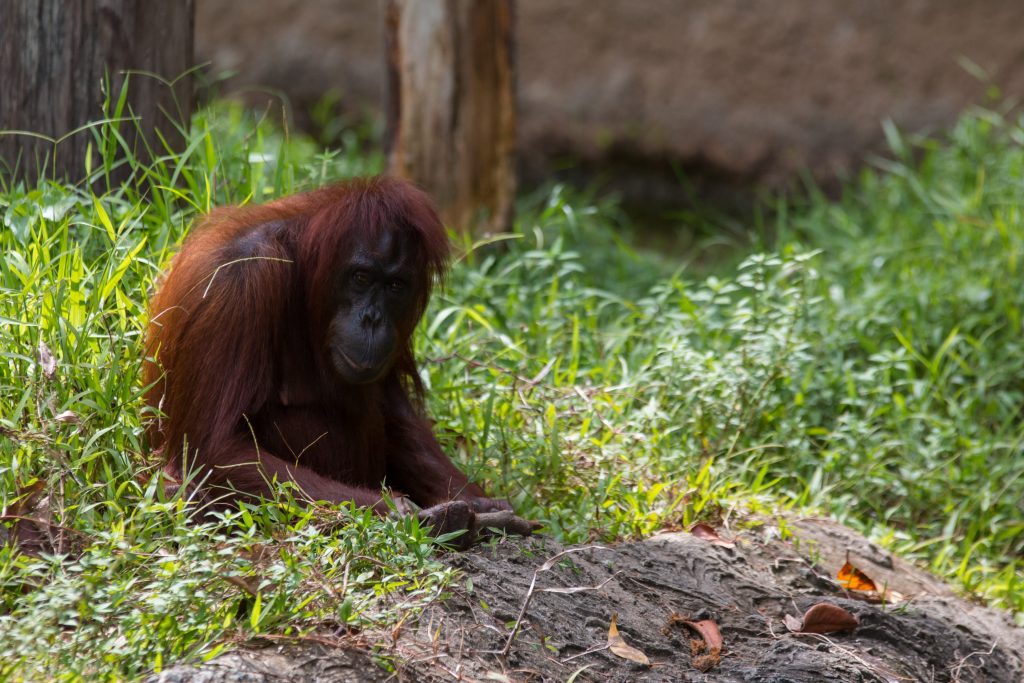 Take a look at the label on the shirt, dress, or pullover you’re currently wearing. You’re likely to find that it’s made partly from rayon, viscose, or modal. While these fabrics are often supported as plant-derived, many are produced from precious, old-growth trees, originating from – you guessed it – endangered rainforests. GUAP revealed that these materials have drastically risen in popularity due to their versatility, texture, and durability. In fact, 150 million trees are cut down globally, in a bid to source this new method of fibre production. Fast Company explains how the pulp from primary trees is sent to viscose producers, who then turn it into staple fibre. This fibre is sent to a dyer or spinner to be made into textiles which are sent onto fashion brands. Not only is viscose/rayon production an extremely toxic method, but 60% of the tree is also wasted in the chemical process.

Vancouver-based non-profit company Canopy work with tree sourcing companies to find solutions in favour of protecting old-growth forests. Founder and executive director, Nicole Rycroft, reveals how many brands were unaware of where their plant-based textiles come from. There is one particular pulp mill deep within the forest of Northern Sumatra, once home to sun bears, tigers and populations of native farmers. The Malaysian government administered forest logging for eucalyptus plantations until Canopy got involved. There was even an incident in which a farmer, attempting to protect his land from bulldozers, was jailed for three months. Invaluable ecological systems and habitats are being destroyed by authorities that value profit over their citizens and environment.

What does the Palm Oil Industry mean for the indigenous people of Borneo?

Having Rungus/Kadazandusun family meant I was exposed to not only Orangutans in the wild, but also indigenous living. For centuries, the Orang Asli (‘original people’ in the Malaysian language) have survived and thrived solely from the jungle: living in longhouses made of wood, bamboo and ‘atap’ (palm leaves). Indigenous groups often live cooperatively in these houses, consisting of a central communal area leading off to family quarters, sometimes housing up to 70 families.

As one of the oldest in the world at 140 million years old, Borneo’s rainforest has always subsisted alongside indigenous communities, who take only what they need; preserving and living in tune with their surroundings. But this way of life is dying. Trips to cities and peninsular Malaysia are becoming increasingly frequent for indigenous peoples to obtain things to help them get by, whether this be food or housing supplies. Due to deforestation, these communities are no longer able to sustain a way of life supported directly from the land. 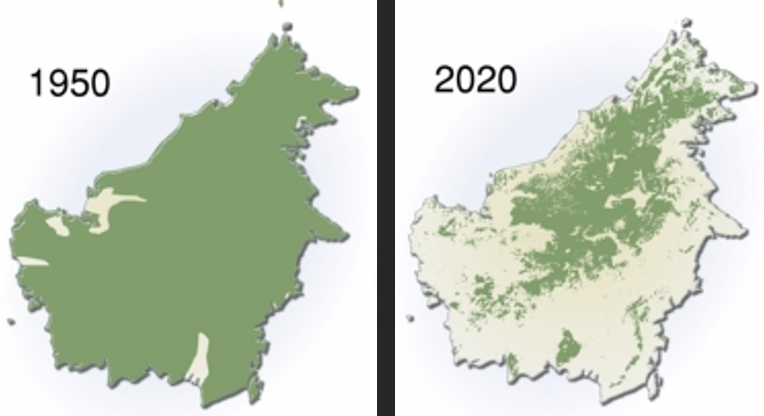 Under Bruneian, Indonesian, and Malaysian jurisdiction, the island of Borneo is responsible for 85% of the manufacturing of the worlds palm oil. According to Reuters, palm oil plantations have been accountable for 39% of rainforest loss (an estimated 15 million hectares) from 2000 to 2018 alone. And due to the pandemic, palm oil production is expected to grow even more over the next few months.

As well as man-made fires, the island is also facing seasonal wildfires caused by the deforestation, reports The Guardian. The man-made fires created during the Slash-and-Burn process create peat soil. Since this soil is very flammable, it allows for localised fires to spread and grow out of control, having devastating and fatal effects on local communities.

The Volunteer Firefighter Association, set up by The Sarawak Fire and Rescue Department, is the first of its kind with helpers from the Penan community. One of Malaysia’s 18 indigenous groups, the Penan are the native people of Sarawak, Borneo and have been selflessly volunteering when wildfires occur. The deaths and evictions (as a result of wildfires) only catalysed their desire to support.

As if wildfires weren’t enough, my home district of Kudat has fallen victim to a particularly strong strain of Plasmodium knowlesi, otherwise known as Pk Malaria. The International Journal of Environmental Research and Public Health released an article explaining how this strain, usually affecting macaque monkeys, has begun transmission to humans. The reason for this is debatable. However, the correlations between cases and the mosaic landscape of oil palm groves, suggests that deforestation is the reason for the rise. Unbeknownst to many, Malaria is life-threatening causing those infected to fall into temporary comas, following symptoms of high fever, chills and nausea. Extreme cases have resulted in brain damage, liver and kidney problems and even death. Parasites can lie dormant in your system up to a year after the initial infection. It’s clear to see that the effects of palm oil exploitation go way beyond what you may first think.

WHAT IS BEING DONE ABOUT PALM OIL EXPLOITATION?

The Roundtable on Sustainable Palm Oil is a non-profit organisation aiming to unite stakeholders from sectors of the palm oil industry to implement internationally abiding standards to make palm oil sustainable. With claims of wanting to sustainably, yet continually source and use palm oil, people started to doubt their integrity. Greenpeace states that it took 14 years for the RSPO to ban its members from destroying rainforests, however, the same members continue to devastate forests and played a part in the Indonesian wildfire crisis in 2015. The main takeaway is this: sustainable palm oil does not and cannot exist while innocent people, animals and ecosystems are dying. Brands such as Nestle and Mondelez proudly claim to use RSPO (responsibly sourced palm oil) when, in reality, they probably couldn’t tell you where it came from if their life depended on it. In my eyes, the RSPO are a definitive example of greenwashing.

In March 2019 the EU classified palm oil as “high indirect land-use change product that raises its greenhouse gas emissions to unacceptable levels”. With this in mind, they aim to phase it out of the EU renewable energy mix by 2030. While deemed excellent news for the environment and consumers; there are an unlikely group of people opposed to this ban: Malaysian farmers. Given the economic and financial status of the island, the boom in palm oil has lifted hundreds of thousands of people out of poverty. With new opportunities, people can abundantly feed their families and send their children to good schools. With the new ban, people fear for their future and wellbeing. In such extreme examples of poverty, it’s easy to empathise with their concerns. 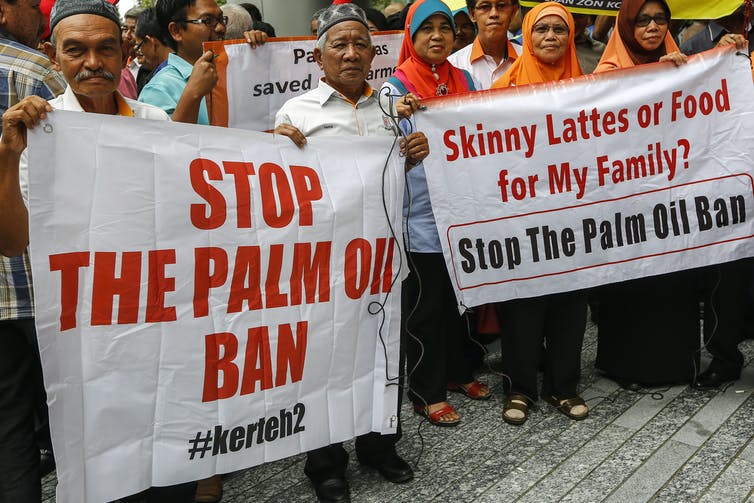 It would be naïve to think that companies will stop exploiting palm oil without legislation, even once Borneo is gone. In my eyes, and for many others that have seen the effects of the palm oil industry first-hand, such senselessness is incomprehensible; what will companies use once the world is barren of these invaluable ecological systems? It’s clear that they will continue to source and exploit, with the selfish mindset that this is a problem for future generations to fix.

All in all, we need stakeholders, companies and government officials to find environmentally and economically sustainable alternatives, whilst being able to provide their people with a living wage that doesn’t cost the destruction of our island. It is also our job as consumers and active citizens to boycott and avoid brands that continue to be so irresponsible, and thus help create positive change.

Life As I Know It: Wilson Oryema
Introducing Fashionscapes: A Living Wage
A Day at the Atelier: Meet The Restory’s Artisans
Livia Firth in Guatemala