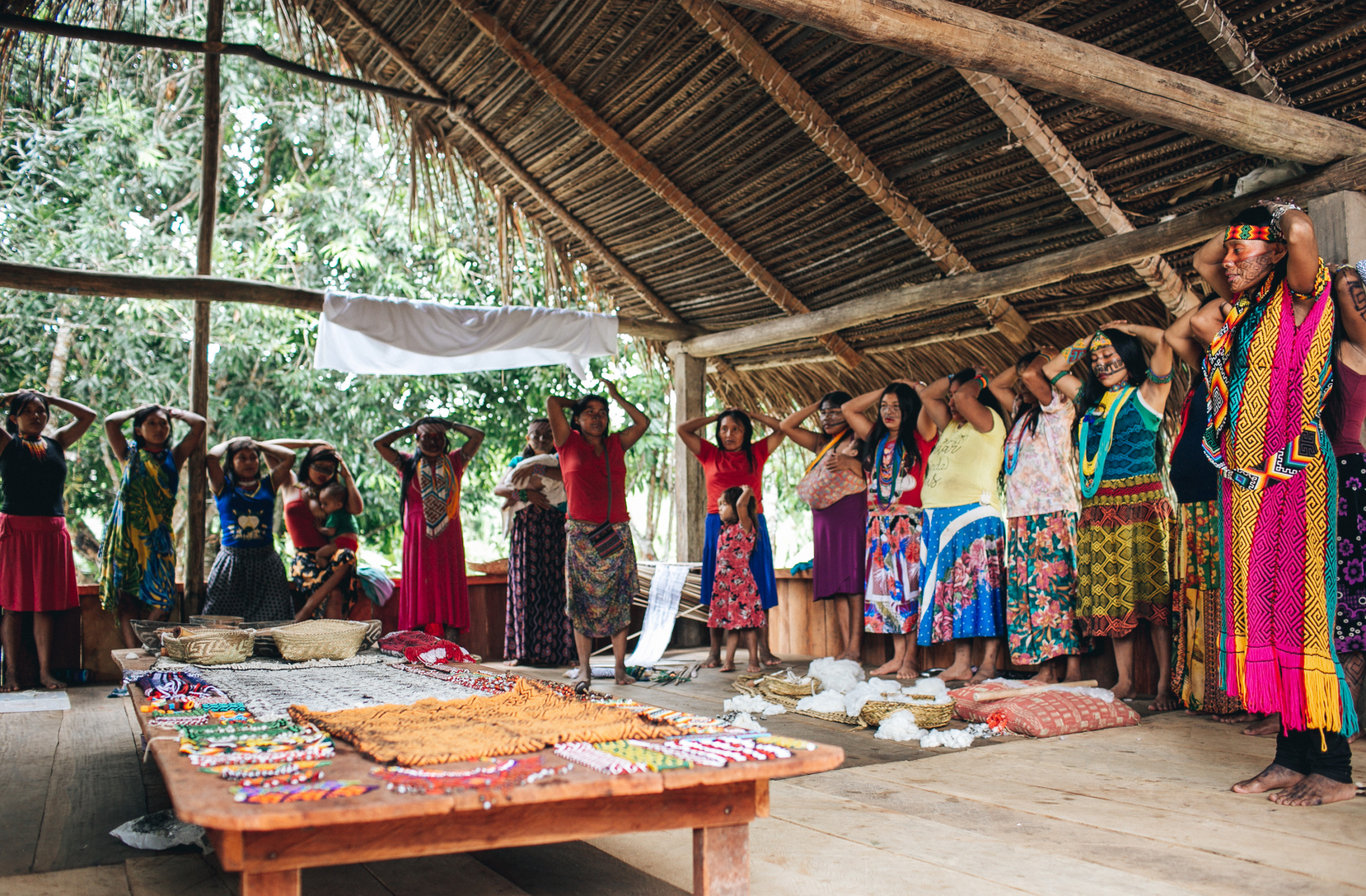 In the first instalment of The Handprint Diaries, a series that follows the relationship between female communities around the world and their artisan crafts, Zazi Vintage founder Jeanne de Kroon takes us to Brazil to meet the Huni Kuin women and learn about their relationship with cotton production.

It was midday when I arrived at Boa Vista in Brazil. I remember sitting there for hours in the rain in a canoe, watching how the water rose, in awe of the forest and its humbling power. A few years ago, I had been lucky enough to meet Txana Ikakuru, the spiritual leader of an indigenous community called the Huni Kuin, whose name translates as the true people. After coming away inspired, I promptly reached out to an organisation that offered to take me on a journey to meet them. I travelled to the forest with Alessandro Isaka and Diana Yaka, two humans who have dedicated their lives to connecting the forest’s community with the rest of the world. They told me the history, how missionaries came and went, and how illegal logging has caused severe damage to the surroundings. But most of all it was a story of hope, about how the forest is now calling many people that want to catalyse change by working with the indigenous community on its protection. 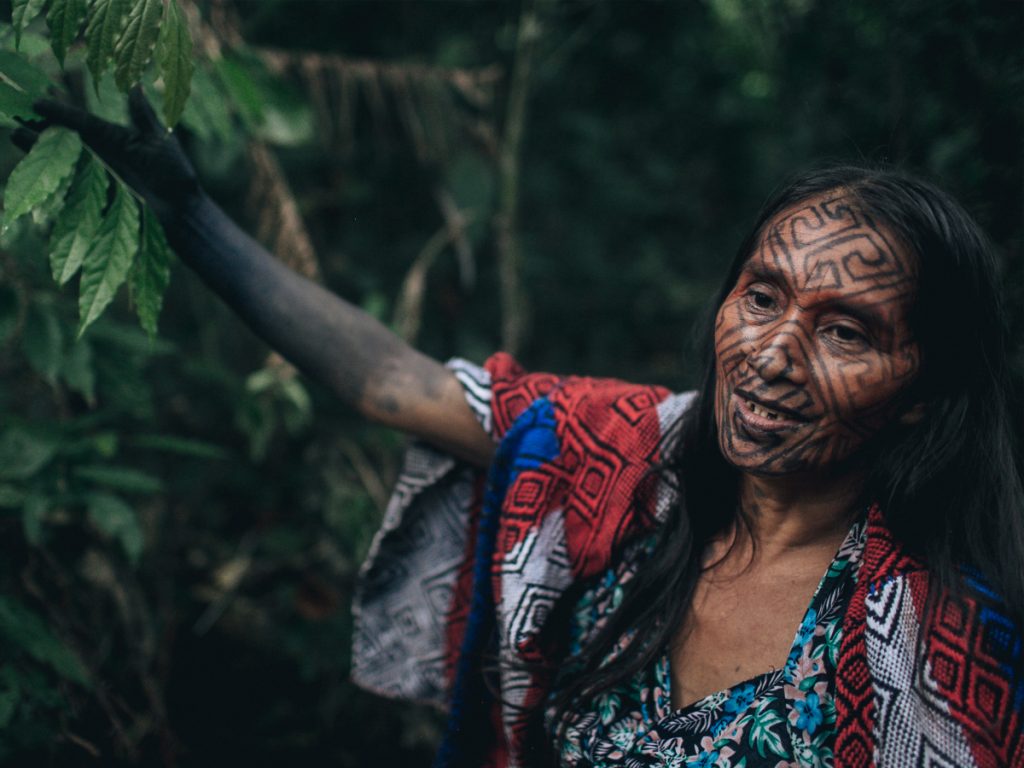 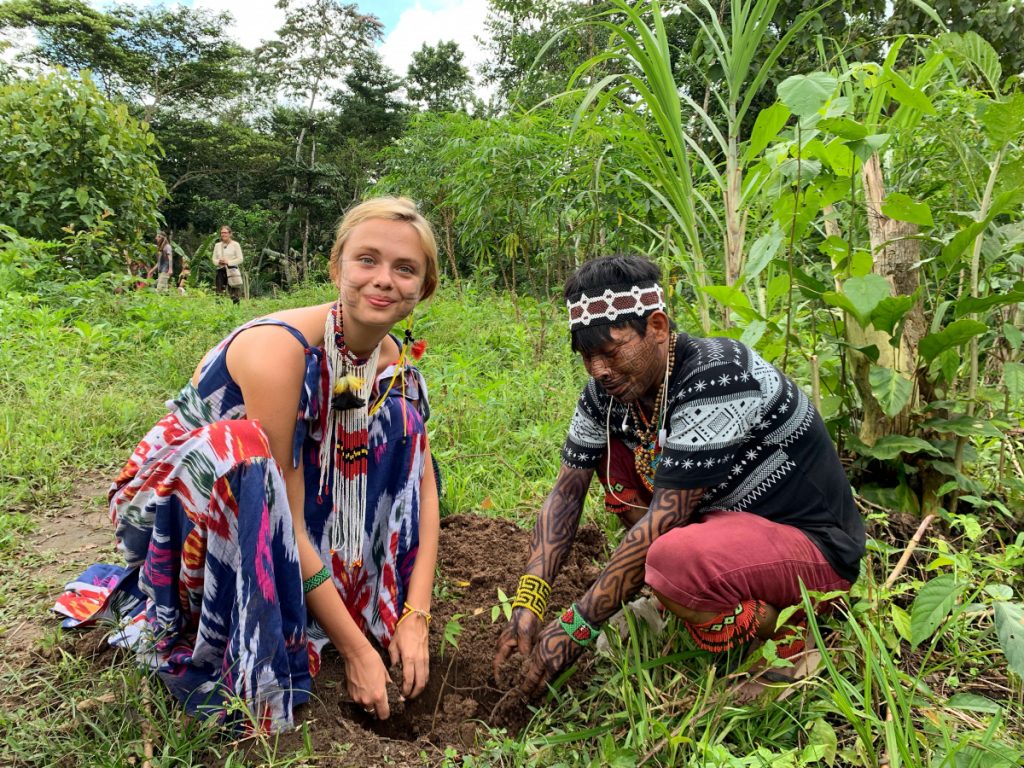 The Huni Kuin community have been cultivating the ancient cotton seed for generations. Planted in the forest, organic cotton needs no further water than that which it naturally receives. Women harvest the cotton, spinning it by hand with a spindle made of ceramic and wood, and dye with plant and mineral pigments that are sustainably extracted from the forest. All materials are collected at specific locations in the forest or cultivated, creating an artisan-land-product relationship that broadens and conserves knowledge of their environment and makes them agents in caring for the forest.

When I arrived in the village, the women were showcasing their work. With their faces painted in the sacred patterns of the forest, they wove the natural cotton with on a backstrap loom while the elders spun threads with a wooden drop spindle on their legs. For Huni Kuin women, producing clothing or utensils for everyday use is not an activity separate from their spirituality. Each artistic technique is an ancestral legacy, transmitted by mothers and grandmothers through practice and voice. With the help of prayers, songs, and medicinal plants, the women become masters of weaving. 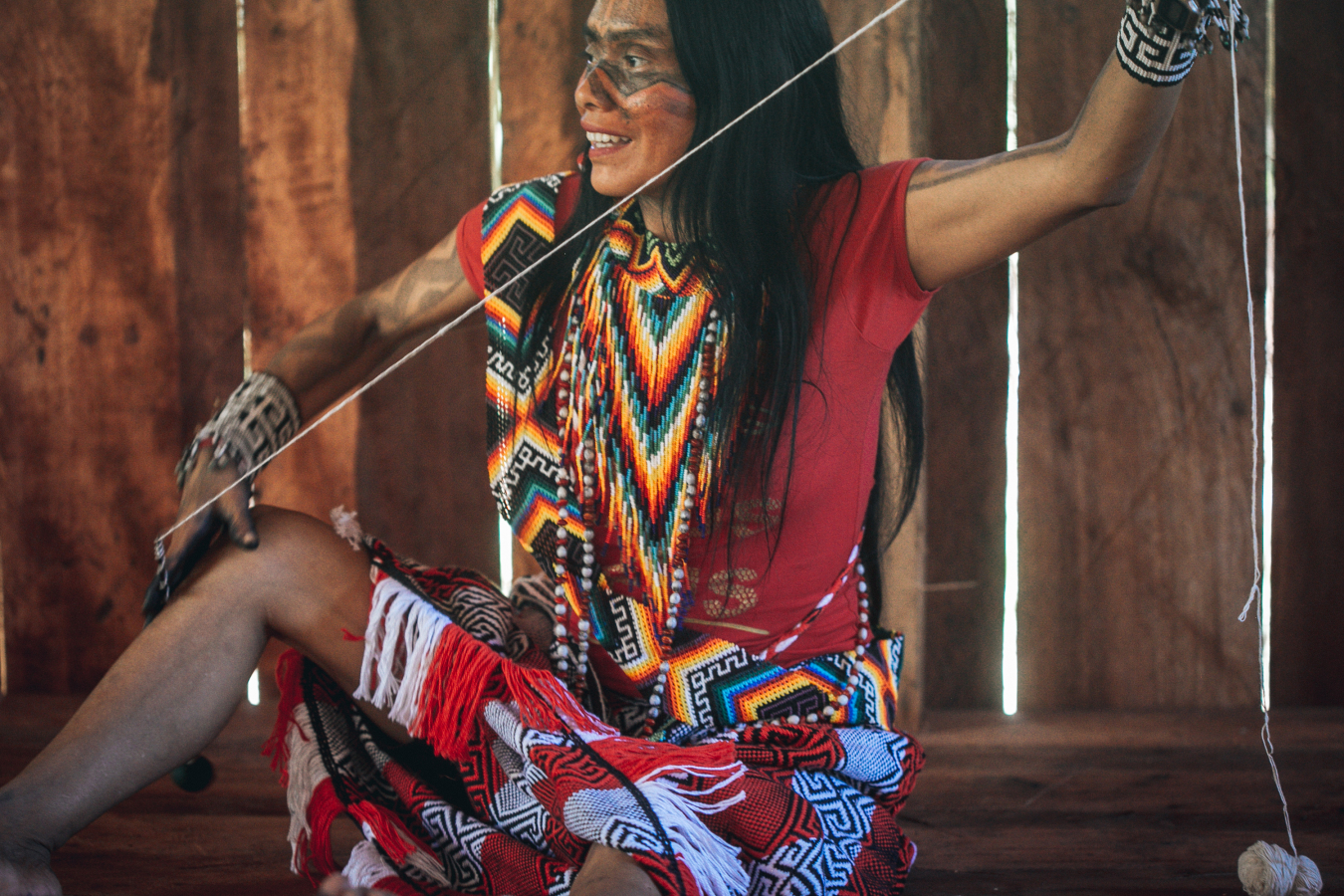 As I went to sleep the first night in my hammock listening to the Huni Kuins icarus around the campfire, a spider appeared in my dreams. The mythical tale of Anarche kept on coming back to my mind. Anarche was such a talented weaver in the greek mythology that she challenged the gods with her skilful weaving. The gods turned her into a spider and everywhere women have connected this little creature with the art of weaving. When I asked Diana the next day, she told me about Bashnen Puru. For the Huni Kuin, the art of spinning and weaving was taught by “Basnen Puru,” an Enchanted Spider who took pity on women who had no clothes to wear and taught them to spin cotton to make clothes and hammocks. She is represented in the image a small spider that lives on a cotton flower.

This image encapsulates just how cloth has always been a way to connect without words, translating the divine through arts and crafts. Where the spider is a little gift from the forest spirits to help humans protect ourselves from the cold, snakes are channelled through prayer songs and woven in to the fabrics. There is such a deep and profound thing that happens when cultures make all the parts of reality sacred, transforming even the smallest of creatures into symbols of the pure creativity that connect us all. 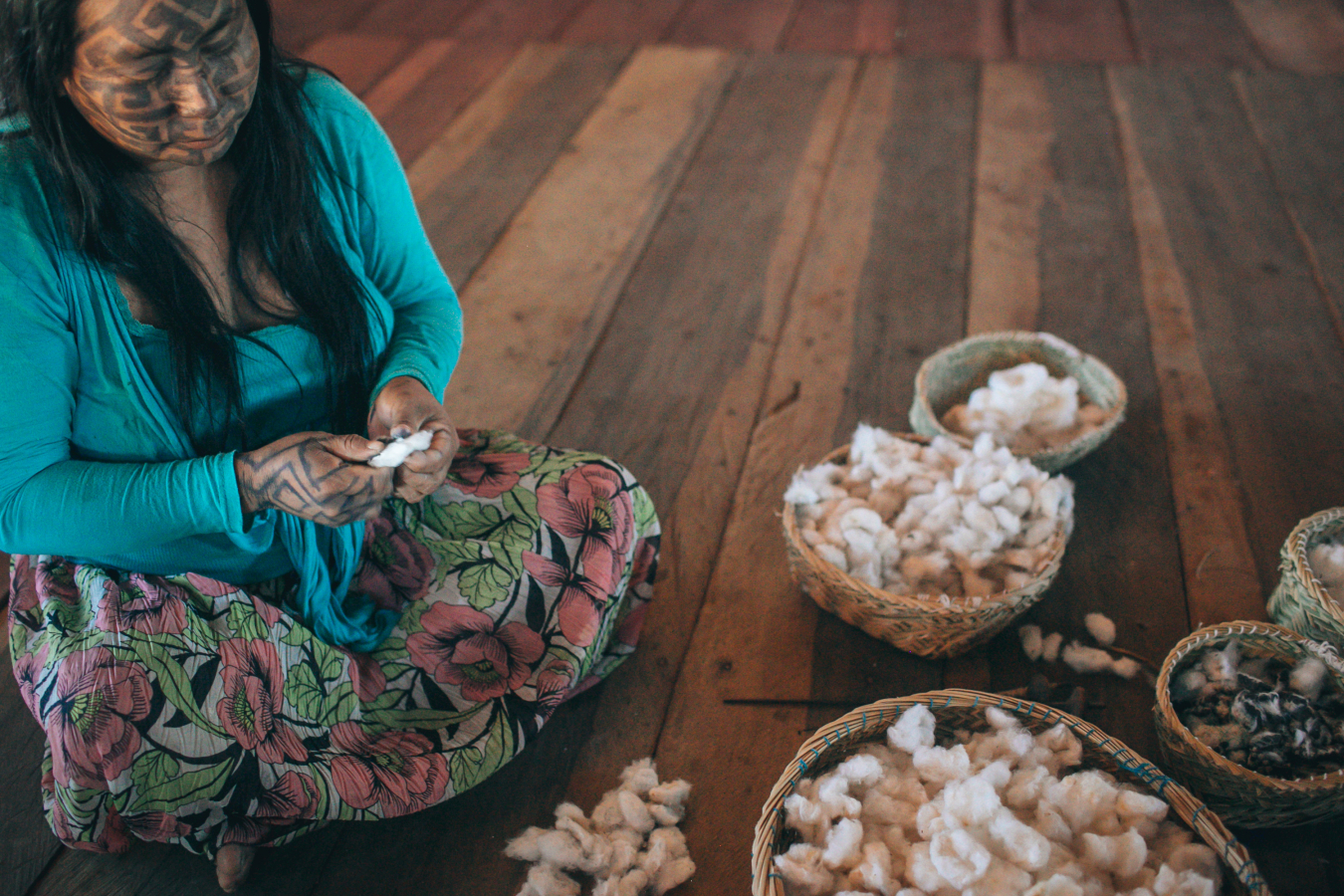 One of the women that took my hand at the beginning of this journey was a woman called Bunke. She was soft spoken but so incredible powerful with every step she took and plant she touched in the village. Bunke Inani Huni Kuin is one of the women who has revolutionized the female role within the community. I learned of how her strength and organizational skills and how her dream of changing the reality of her people have made her a female leader in her community. A master artisan, mother of five, Bunke coordinates the village’s production and sale of handicrafts, as well as travelling the world and sharing the knowledge of indigenous women.

Whenever I am wrapped in the handwoven scarf that I traded for a dress in Boa Vista, I am reminded of the sacredness of what we take for granted. The journey to the forest reconnected me back to this idea, and I came back full of hope. I hope that this is a time where we can bow our heads to the protectors of our future: the people from the forest, the Huni Kuin. I can’t wait to see how the ideas grow from the seeds planted in the forest with Zazi and Bunke and all the women weaving their dreams into existence with a little help from enchanted spiders. 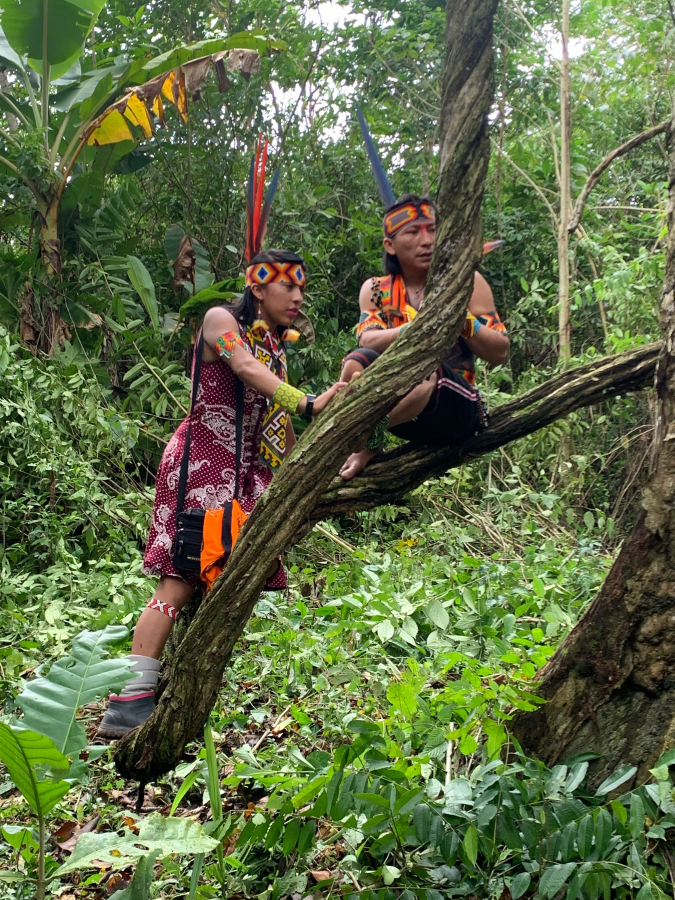 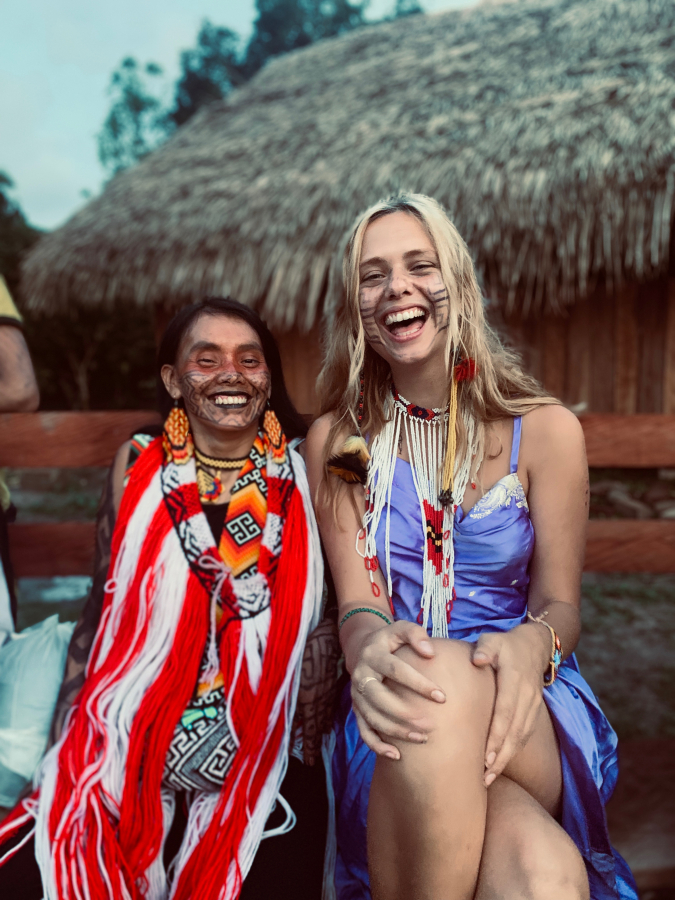 In my opinion, we have never needed to learn from indigenous communities quite so urgently as today. The protectors of our forests are the gatekeepers to so much ancient wisdom, and the some of the most resilient and powerful people that I have encountered. There are ways to support these women through fair trade in their artwork and collaborating on projects that focus on them. One such project is the Huni Kuin Women’s Journey that Diana Yaka is organising next June, an opportunity to get to know the forest and learn from these women, strengthening their empowerment and learning about the community.

I’d like to end with a quote from my favourite cultural anthropologist Professor Wade Davis, whose words perfectly sum up my experience meeting this beautiful community: ‘When asked the meaning of being human, we respond with 10,000 different voices. It is within this diversity of knowledge and practice, of intuition and interpretation, of promise and hope, that we will rediscover all the enchantment of being what we are, a conscious species aware of our place on the planet and fully capable not only of doing no harm but of ensuring that all creatures in every garden find a way to flourish.”