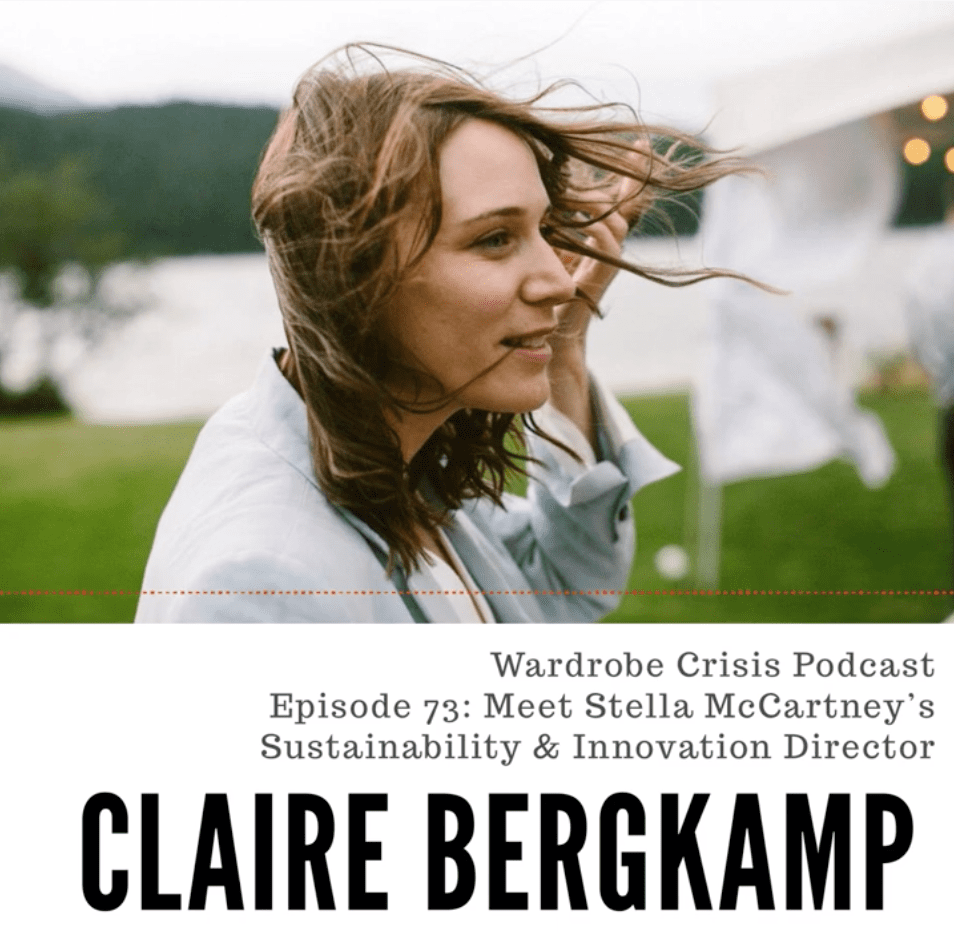 Recorded at Stella McCartney‘s HQ in West London, Clare Press talks to Claire Bergkamp, who heads up the sustainability team at the British luxury brand about everything from system shaking innovation, to circularity and leather alternatives. The brand has been vegetarian and cruelty-free since day one, pioneering in sustainable innovations and has recently launched a social media campaign #ThereSheGrows in collaboration with Canopy to help save the Leuser Ecosystem.

Listen to the episode in full here and see some of the many highlights of the conversation below.

“Circularity plays a big role in it. Our two biggest buckets for innovation are things that allow animal-free, so Bolthreads is a great example for that with their microsilk which is lab-engineered, lab-grown, lab-brewed. […] And circularity is another big bucket for us – how do we truly enable fibre-to-fibre recycling? That’s got to be the way forward.”

Viscose is a material made from wood pulp and commonly used in the apparel industry. So popular in fact thats, as Clare Press states, “150 Million trees are cut down and used for the fashion industry every year” to which Claire Bergkamp adds that “one third of the 150 Million trees is coming from ancient and endangered forests, so placed like Indonesia where there is so little intact forest left […] these places that are perfect, beautiful, magical ecosystems that are full of wildlife”. For this reason the brand has committed to a “completely traceable, fully sustainable managed supply chain,” which was achieved in 2016.

On the importance of using vegan leather alternatives

“The rise in awareness around food has translated into fashion. There’s been quite a few documentaries and books and news articles around the impact that we have eating meat or not eating meat and we’re not saying everyone needs to go vegan, but even just reducing your meat intake as a human has a huge, huge climate benefit.” Clare also mentions that “the same factory farming system that is giving you your meat is the same that is giving you the leather for your shoes. And I think that correlation is slowly translating over where people want to eat a certain way and dress a certain way.”

On the impact of leather

“If you’re getting leather out of Brazil, it’s 24 times the impact versus polyester”

On luxury brands entering the space of re-commerce and renting

“With the Real-Real we are looking at the re-commerce piece, which in luxury makes a lot of sense – it’s really the first step towards circularity, keeping things in the system for as long as possible.”

On minimising factory waste by collaborating with suppliers

On what drives her

“I think it’s curiosity at the core of it. I just really want to know the answer to things, and I think that’s really what drives me. I really want to get to the truth of things at the end of the day.”

On waste created by stock that is denied on delivery

“It’s the stuff that never makes it to the shop floor, because they deny it on delivery, so they deny it at the warehouse because of some kind of quality fault. It will happen sometimes just because they decided the colour is not what they want anymore, but they’ll make up a reason and there is a huge amount of waste being generated by this denied on delivery stock. And often it goes back and the suppliers are having to pay for it – it’s a very untold story”

On the politicisation and denial of climate change

“I think that anyone who ignores the science is just in a state of denial, which I on some level sympathise with because it is quite overwhelming, but at the same time there is absolutely no excuse for not paying attention to science in my opinion.”

On traceability and transparency

“When we are talking about climate change, we need to be talking about real traceability, we need to be getting back to the farms, because when we look at our supply chain impact, at least here at Stella, which I think is relatively representational of everyone’s, between 50-60% of our overall business impact is at the raw material stage, so that’s the farm, the field, the forest – the very furthest piece of the supply chain and that’s where the biggest impact is.”

“Regenerative agriculture has to be part of fashion’s response to climate change, because we are using a lot of cotton […] and cotton is extremely impactful.”

Life As I Know It: Carrot Banana Peach Founder Nigel Gartside
Can Planting Trees Harm The Planet? It Depends How and Where It's Done
Life As I Know It: Tolly Dolly Posh
If Vintage Could Talk: Stylist Mary Fellowes Shares the Stories Behind Her Favourite Pre-Loved Piece...