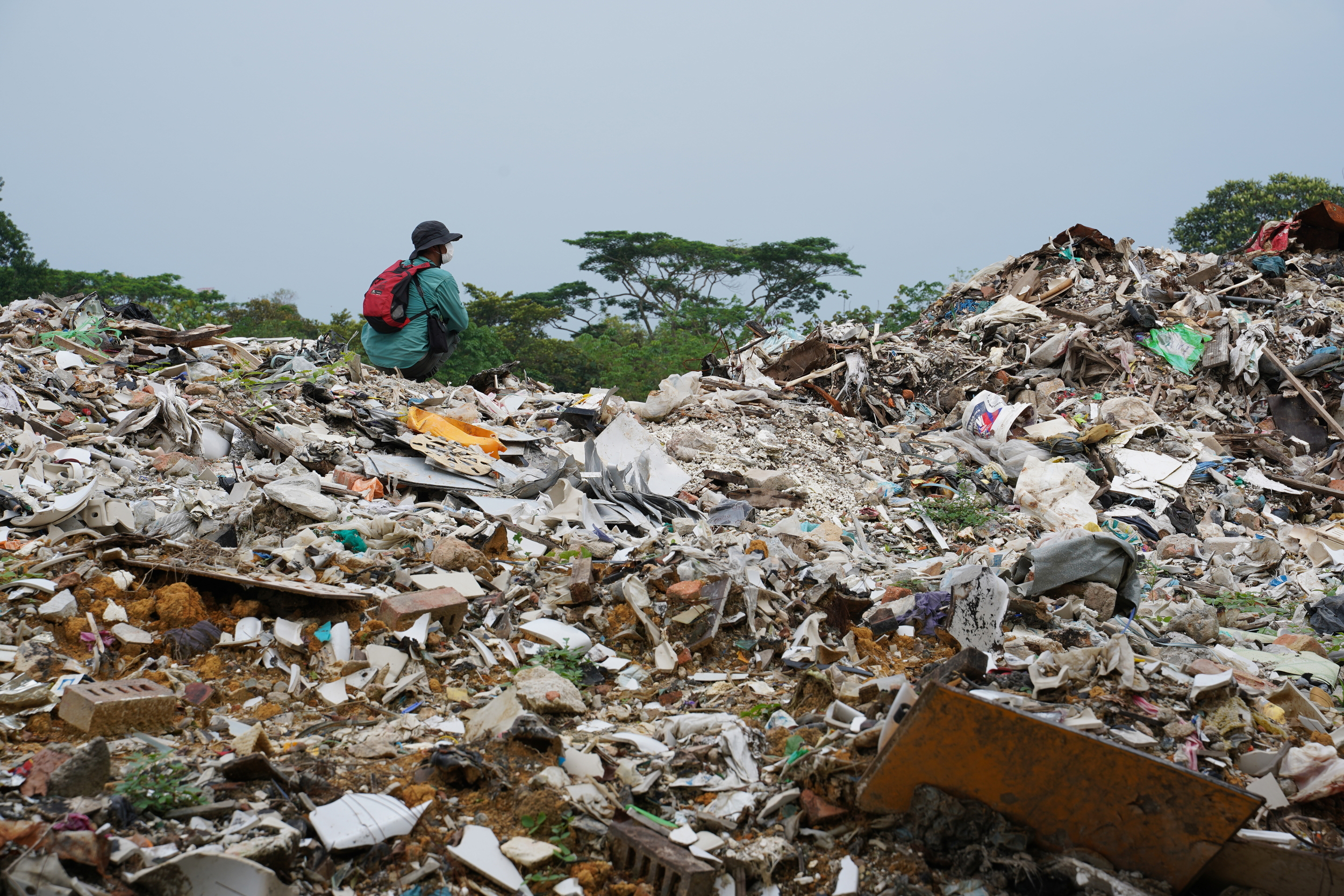 ‘Treated Like Trash’: What UK Recycling Systems Teach Us About Waste Colonialism

The UK, along with other countries in the global north, has long been meeting its recycling targets by simply shipping plastic waste overseas. Plastic Patrol founder Lizzie Carr investigates how loopholes in the system saw our trash exported to China, Malaysia, Indonesia and even Turkey and Poland, later to be burned and cause serious health issues for local people.

Have you ever thought about where your household recycling goes once the refuse collectors take it away? You probably assume that the packaging you meticulously separate, rinse and place in the recycling bin – away from other waste – will be headed to a reprocessing plant for, well, recycling. And with the trajectory of UK recycling rates on the rise in recent years – the latest insights claim the UK recycles or recovers 70% of all packaging waste (significantly above the 60% target proposed by the EU) – it’s a natural conclusion to draw.

So, in 2018, when news hit that China had introduced a ban on imports of ‘foreign waste’ in order to upgrade industry, it exposed the general public to some pretty significant flaws in the UK’s waste management system. Our rose-tinted perception of a well-oiled machine, massaged by positive stats, was shaken. Targets, it turns out, were being met almost exclusively through exporting waste to other countries and not via domestic reprocessing. The UK – along with other countries in the global north like US and Australia – were shipping waste to poorer countries and using them as the dumping ground for the excess we couldn’t manage ourselves.

It’s called waste colonialism: a concept formally introduced in February 1989 during the United Nations Environmental Programme Basel Convention working group. African nations declared fears over the rise in disposal of hazardous waste from the global north into the global south. The environmental and human cost was disproportionately affecting low income and vulnerable communities and was set to worsen if the current system continued.

Historically the UK has claimed access to land of economically disadvantaged countries and people for property settlement or resource extraction. But in recent years, as the global thirst for mass disposability increased, requirements for landfill and recycling facilities have grown too.

In 1997 – some eight years after waste colonialism was coined at Basel – the UK introduced a series of obligations designed to instil ‘producer responsibility’ under its Packaging Waste Regulation. This included the Packaging Waste Recovery Notes (PRN)scheme. A measure implemented to improve sustainable business practice and, ultimately, prevent landfill from clogging by diverting the flow of packaging waste that could extract value.

Under the new legislation, obligated businesses (any company with a turnover exceeding £2 million or producing more than 50 tonnes of plastic packaging per calendar year) was required to purchase a PRN. This acted as documented evidence that packaging waste had been recycled or recovered in the UK and demonstrated that businesses had offset the impact of packaging that they’d placed on the UK market.

There was also an international exporters version – known as PERN. This was equivalent to the tonnage of packaging recycled. It could be raised as evidence by exporting packaging waste for recycling, or by recovery or through incinerating packaging waste at an accredited facility. The PRN / PERN system provided financial incentives for the recycling industry to either collect and reprocess or export for reprocessing. In result, this would meet the increasingly stringent EU recycling targets.

But there was one major flaw.

The self-reporting regulatory system of PERN combined with the lack of due diligence from UK Government left the export system wide open to exploitation. Government guidelines were clear in its expectations: exporters must demonstrate that the final destination of the waste they send to other countries “operates to human health and environmental protection standards that are broadly equivalent to the standards within the EU.” However, the limited verification measures imposed by recipient countries meant this was easily exploited.

Over a number of years UK, US, Australia, Canada and other high GDP countries were all guilty of shipping thousands of tonnes of contaminated plastic and electronic waste to poorer nations, shifting the burden of processing to countries with inadequate infrastructure to manage their own waste and recycling requirements. By 2016, the problem was so insidiously widespread that Sir James Bevan, former Chief Executive of Environment Agency, declared waste crime as ”the new narcotics”.

But it was only in 2018 when China announced its foreign imports ban on a number of materials that the system roused from its sleepwalk. Around that time UK waste company Biffa had been caught shipping household waste – including used nappies and sanitary products – to China by illegally labelling it as paper. It was fined £350,000 but this was barely a rap on the knuckles for a company turning over circa £830 million annually.

Rather than this incident causing a catalyst for an introspective review of the UK’s waste management structure, to improve and increase capacity for domestic reprocessing and alleviate the burden placed other countries, the UK Government raced to find other countries willing fill the gap China had left.

Malaysia, Indonesia and Vietnam stepped up to give the UK a waste disposal lifeline, whilst all still suffering demonstrable problems with their own waste management infrastructure. Later that same year a number of countries the UK exports waste to – including Malaysia and Vietnam – introduced new legislation to stop contaminated foreign waste entering their ports. The systematic abuse of the global north’s waste export system had finally reached a tipping point, and poorer countries were fighting back.

Done properly, exporting recyclable waste is cheaper and reduces landfill in the UK whilst providing economic benefit to recipient countries. But the system is being exploited and instead we are simply moving waste from wealthy countries to poorer ones, adding to the problem of mass disposability. We cannot continue to consume at the current rate and scale without adequate systems in place to manage it. The planet is choking on waste and fumes as we continue to burden poorer nations, creating huge environmental implications and adding a detrimental cost to human health.

It’s estimated that between 400,000 and one million people are dying every year from illnesses caused by living near plastic pollution. That’s one person every 30 seconds. The mismanagement of waste serious spreads diseases and toxic pollutants released by burning plastic waste is often more hazardous than other forms of air pollution due to the proximity of incineration facilities to communities.

A lot of poor communities also make a living on landfill sites, risking their lives to collect recyclables from waste mountains with significant landslide risks. In 2018, 17 people were killed at a rubbish dump in Mozambique, while more than 115 people died in Ethiopia after a landfill landslide.

These case studies, combined with an in-depth report by the National Audit Office, reinforced allegations that the PERNs system was easily and frequently exploited for profit. Some producers were misrepresenting the amount of packaging produced in order to reduce the number of PRN/PERNs they were required to buy, whilst others entirely invented waste or partially contaminated exports with other non-recyclable materials. In both cases it meant that recycling data was being artificially inflated and ultimately falsified.

Today, the practice of exporting waste is becoming more complicated. As poorer countries begin refusing to accept UK waste, the UK is forced to re-think and innovate.

In January 2019, campaigning organisation, A Plastic Planet, brought the issue of waste exports into sharp focus with policy makers through an ‘Early Day Motion’ – calling for a complete ban on plastic waste exports to the developing world.

Founder, Sian Sutherland, said: “We had around 40 cross party MPs support our Early Day Motion and were pleased to see it embedded in all three major party manifestos. Now it is included in the 2020 Environment Bill, and we await its implementation and – hopefully – its impact.”

The Environment Bill highlights the UK’s commitment to export more waste to members of the Organisation for Economic Co-operation and Development (OECD), which includes countries like Turkey, already known for its high-level waste mismanagement statistics.  According to the latest figures, Turkey imported 106,471 tonnes between January to September 2019, which was 26 per cent of all plastic scrap sent abroad; in 2017, it was only five per cent.

The Latvian authorities (also part of OECD) announced just last month that it will return almost 600 tonnes of plastic waste illegally imported from the UK.

A recent investigation by the BBC in Turkey uncovered what most suspected: some of the 160,000 tonnes of plastic that the UK ships to this country is being burnt on roadsides or dumped illegally.

Sian Sutherland commented: “Yet again, we are not dealing with our own dirt and there is no responsibility taken by the UK agencies to oversee compliance once it arrives at the country of destination. We are already working on ensuring loopholes are not exploited by simply increasing exports to countries like Turkey. Every day we are still knowingly sending containers stuffed full of contaminated waste in the name of ‘recycling’. Shame on us”.

So, what is the solution to effective waste management?

It’s time to reimagine a world without waste, one where the very concept of waste doesn’t exist, and a truly circular economy thrives. With the recent launch of Loop – a reusable packaging service for household items – this vision is slowly becoming a reality. Plastic Patrol, the non-profit organisation I founded, along with other campaign groups like A Plastic Planet, are calling for a ban on waste exports until a validated blockchain tracking system is in place.

Sian concludes: “The solution to waste is to design fundamentally differently. And that is not a simple material change but a system change. The most effective solution to waste management is to create less of it in the first place.”

The UK packaging recycling target for 2030 is anticipated to be 70%, and with push back from nations that would have historically accepted UK waste, there is more pressure for recyclers and Government to update infrastructure and innovate.  The proposed introduction of the Extended Producer Responsibility reform (EPR) is set for 2022 with rumblings that it may now be delayed until mid-2023. It requires mass public support to ensure true responsibility and accountability is placed on manufacturers and retailers for the entire life cycle of a product – from start to finish – and including its entire supply chain.

Now, as we leave the EU and recover from the global Coronavirus pandemic, we have the opportunity for a green recovery that is ethical and encompasses more considered waste management in the UK and with exports.  We must challenge the status quo and create truly sustainable businesses with transparent supply chains with accountability at every stage of the waste disposal process.

In the countries the UK has burdened with waste, implementing stricter measures and verifications will have a significant positive impact on human health and quality of life. In some cases, it’s literally a case of life and death.

And we will finally be able to rest assured that when we separate our household recycling, it’s going to be managed properly without harming people round the world and treating them like trash.

Discover our list of brands with the best take-back schemes to help you reduce waste going to landfill.

See our guide to the complex world of recycling.

The Living Wage Report, May 2017
Bringing Business to Life: From Belo
The Commonwealth Fashion Exchange at F4D's First Ladies Luncheon
How 3D Digital Design and Augmented Reality Can Slash Textile Waste In Fashion