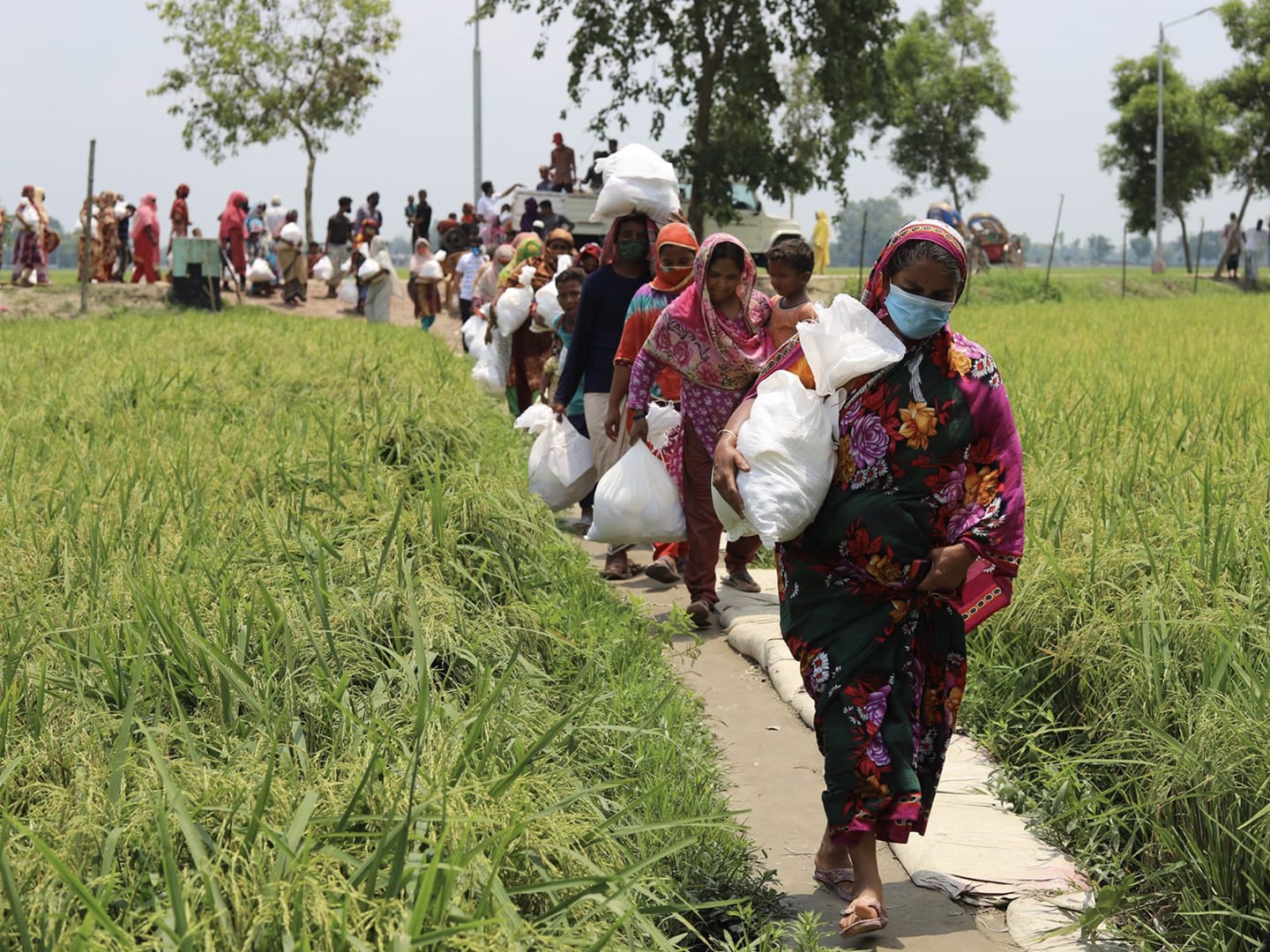 What Part Should Consumers Play in Solving the Current Factory Crisis in Bangladesh?

Organisations such as Lost Stock are helping garment workers in Bangladesh through the sale of assorted clothes boxes made up of stock from cancelled orders. But why has it come down to consumers to take action where bigger brands have failed? Elizabeth Bennett investigates.

When the COVID-19 crisis spread to Europe and then North America in mid-March, in Bangladesh the knock on effect was felt immediately. With the garment industry making up 80% of the country’s exports, the halt to clothing production from Western suppliers tightening their purse strings in response to decreasing sales and shop closures left a devastating effect.

“When the outbreak first happened, clothing brands blanket cancelled and refused to pay for their orders. Suppliers in Bangladesh had bought raw materials, started the manufacturing process and labour costs had occurred. In some cases, businesses were even refusing to pay for orders they’d already received,” Meg Lewis, Campaigns Manager at Bristol-based garment worker campaign group Labour Behind The Label, explained.

The pandemic starkly highlighted the huge power imbalance in this flawed system where Bangladeshi clothing factories aren’t paid until the goods reach the shop floor and big businesses can straight up refuse to pay for items they have ordered. “In Bangladesh, $3 billion worth of orders were cancelled, which meant the country’s 4.1 million workers, the majority of whom are women, were furloughed or laid off without severance, savings or access to healthcare,” Ayesha Barenblat, Founder of Remake, a San Francisco based fashion activism non-profit, stated. With garment workers receiving poverty pay – often as little as 3,000 Taka a month (approximately £25) – there’s no opportunity to save money and any halt to earnings has a life threatening impact. “Our biggest worry is for the women who make our clothes, who already live paycheck to paycheck, without social protections. Many have made the difficult choice to go back to factories that have opened up, choosing livelihoods over their health because their families depend on their incomes,” Barenblat added. 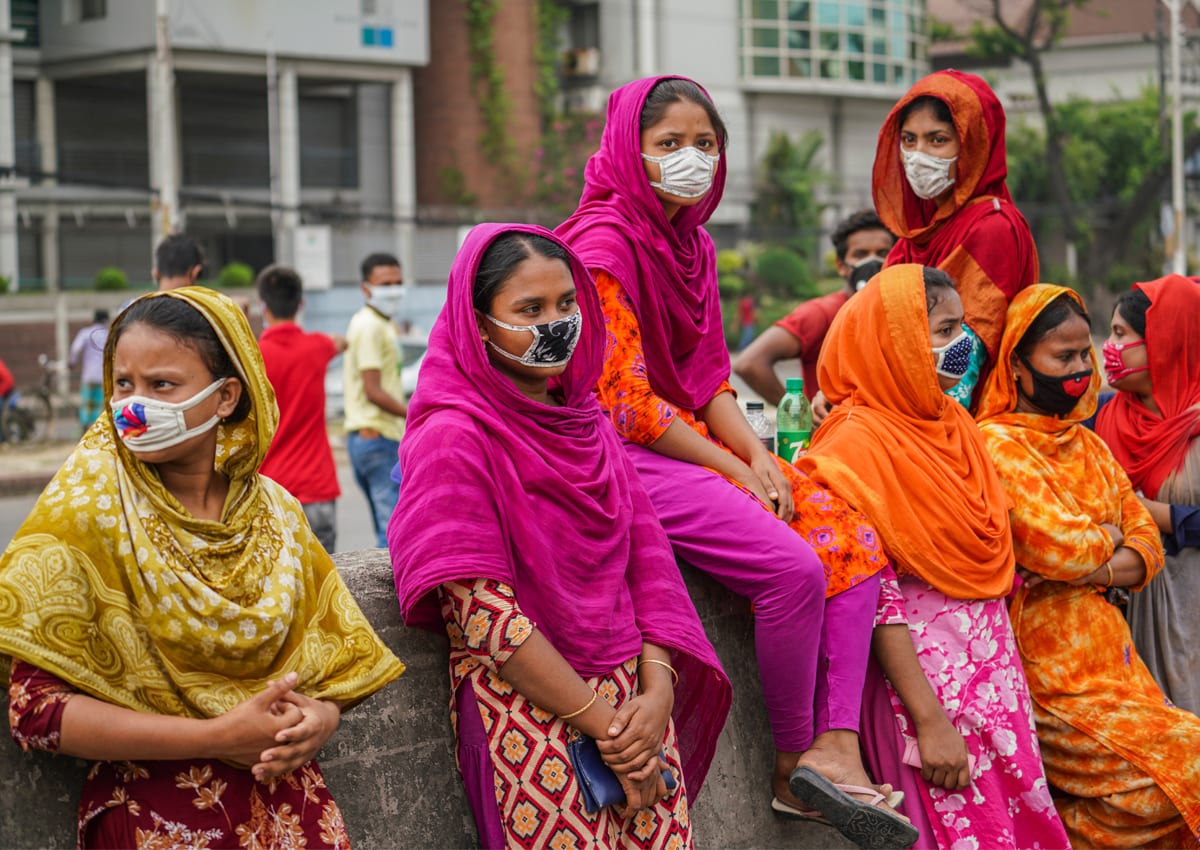 Image: Garments workers block a road demanding their due wages during the lockdown in Dhaka, Bangladesh, Credit: Shutterstock

Thanks to work by organisations like Labour Behind The Label and Remake, these injustices haven’t gone unnoticed. Social media campaigns such as #PayUp have piled pressure on brands to honour their orders and pay for the items they requested. Consumer-funded support schemes have offered an immediate solution too.

One initiative grabbing headlines across the mainstream fashion media is Lost Stock. Created by shopping app Mallzee, the scheme aims to help out-of-work garment workers and prevent rejected orders going to landfill. For £35 (plus postage), customers can buy a ‘surprise’ box of women’s or men’s clothes originally destined for high street retailers that are shipped direct from the manufacturers in Bangladesh to consumers in the UK. 37% (£12.95) goes to their partner charity, Bangladesh NGO SAJIDA Foundation, who distribute food and hygiene packages (one box feedings one family for a week) while 30% (£10.50) goes to the factory to pay for the clothes themselves. The remainder is split across transports, logistics, postage and fees (see full breakdown here).

Of course, amidst a crisis like COVID-19, supporting workers on the poverty line with food and hygiene is never a bad thing. Nor is trying to lessen the planet-damaging impact of dead stock that often this ends up in landfill or is simply burned. However, does this kind of initiative simply put a plaster over the issue in the short term and let big brands off the hook once again? After all, why should consumers be helping to solve a problem caused by huge corporations. The garment industry turns over almost $3 trillion a year and the top eight global fashion companies each made over a billion dollars in profit in the last year.

Supporting garment workers through donation will help in an emergency situation like the COVID-19 pandemic (you can give directly via TRAID – £5 will buy enough food to support a family for one week) but getting involved in campaigning is likely to have a longer lasting and more wide reaching impact. Remake’s US-based #PayUp petition targeting retailers has seen 15 brands agreeing to pay for back orders in Bangladesh. “Conservative estimates are that the #PayUp campaign has helped unlock $7.5 billion in unpaid orders globally and allowed many workers to receive back wages,” Barenblat explains. 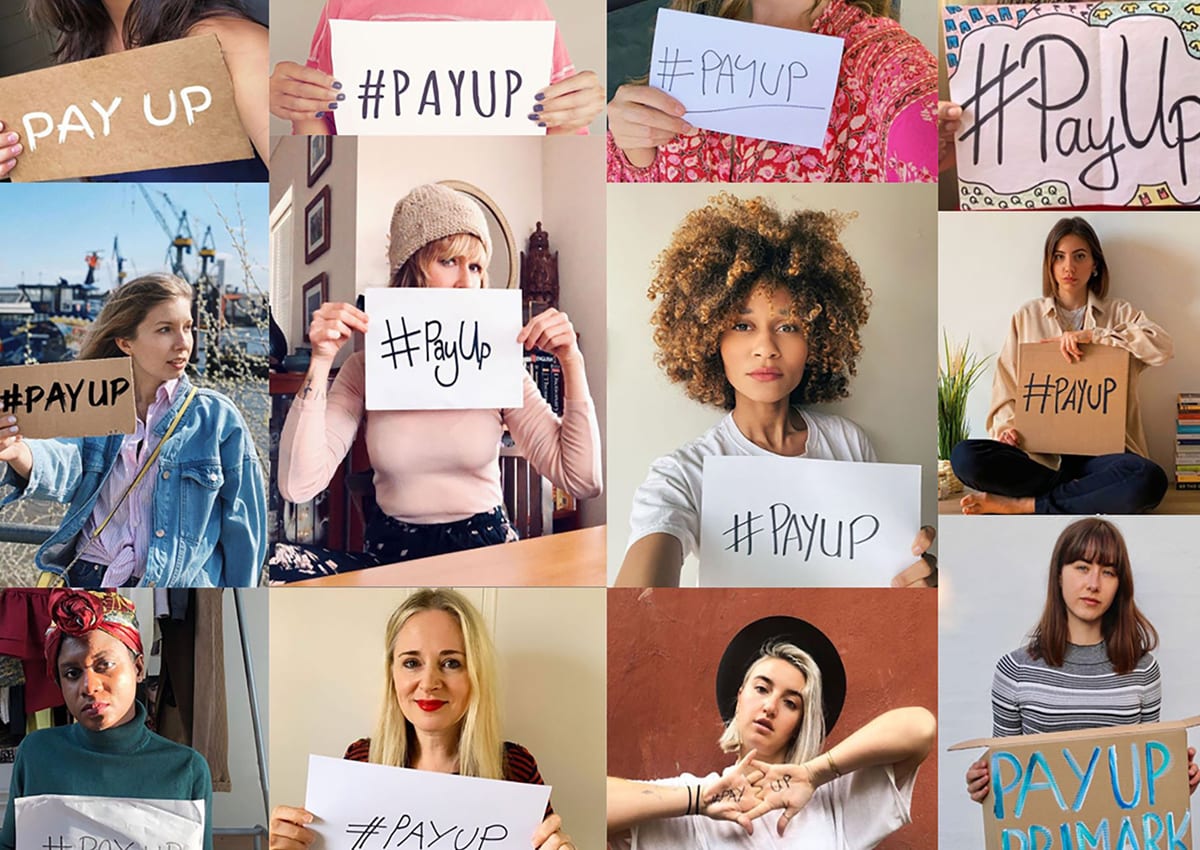 In the UK, Labour Behind The Label have targeted seven big brands with seven requests. These range from short demands such as paying for their orders to medium term solutions like worker safety to a longer term goal to rebuild a more equitable industry so garment workers are never again left so vulnerable post-pandemic. Their COVID-19 brand tracker shows which brands have made progress since the original outbreak. “Through the campaign we have moved two brands up into the ‘taking steps in the right direction’ category,” Lewis said.

Labour Behind The Label, who work with retailers directly and public facing campaigns, are hoping to use this moment to drive real and desperately needed change. “We must remember who is the most powerful actor in this situation. We’re encouraging people to join us and others to unite and use our collective power to make sure brands are held accountable,” Lewis commented. “The only way we can achieve long term change for garment workers is by putting pressure on brands to change a system that’s pushing them into poverty and destitution – we don’t want to distract anything from that,” she added.

When it comes to the role of the consumer, supporting a charity initiative is certainly a positive act but holding the brands with the power accountable is where systemic shifts will be made and long term impacts felt. Hopefully with collective campaigning, the pandemic has the potential to accelerate much overdue change.

“I’m not sure I will survive”: Read our interview with one Bangladesh factory owner during Covid-19.

Find our how the pandemic exposed the broken links in fashion’s global value chains.

How far have we actually come in our fight to change fast fashion?

5 Takeaways from Fashion Meets Tech: How Innovation is Creating Sustainability in Fashion
The Green Carpet Challenge at the Met Ball - A History
Chopard Commits to 100% Ethical Gold
Budget 2018: What it means for the Planet