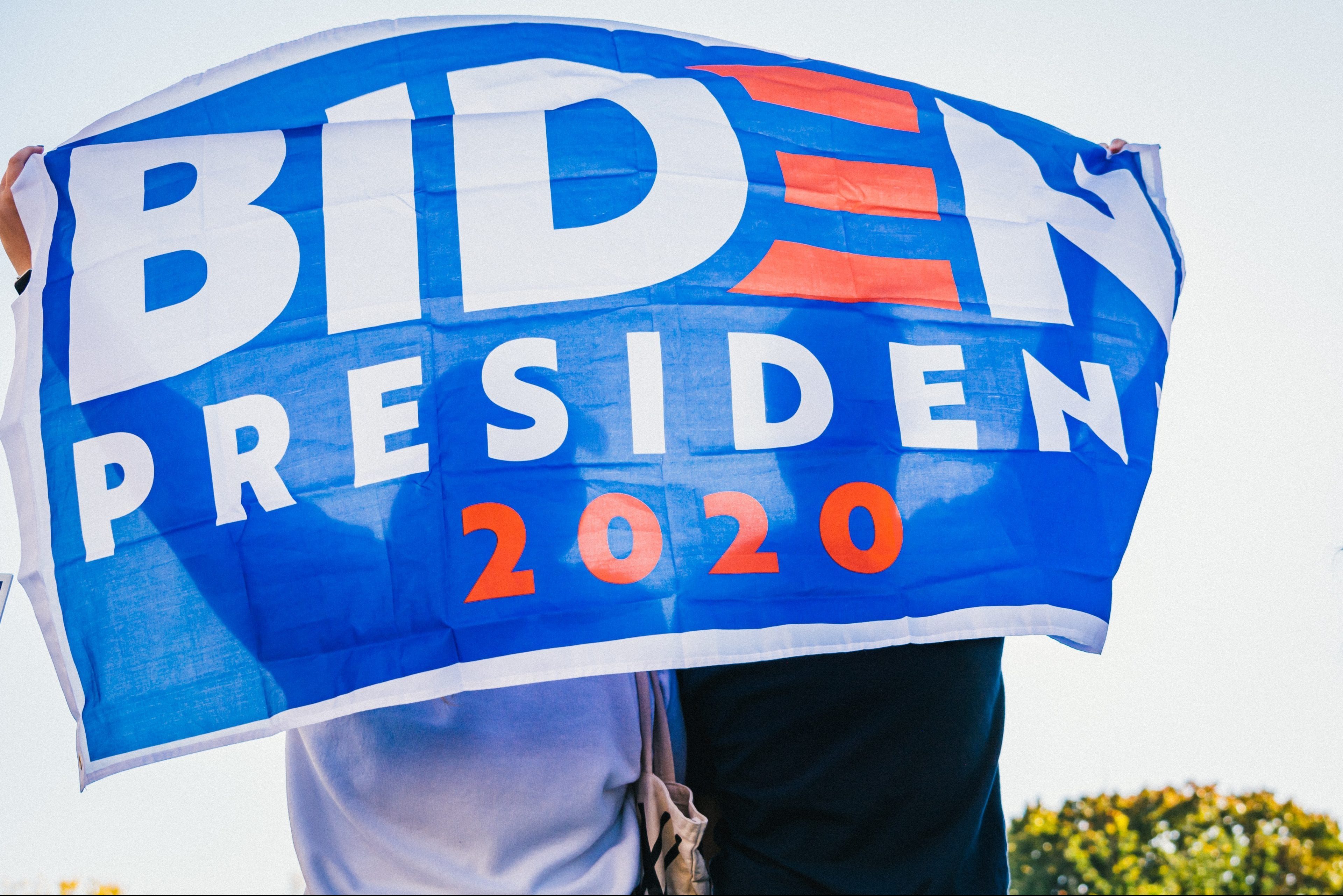 What’s Next for America’s Climate Agenda

Earlier this month, the world waited with bated breath for the results of the US Presidential election, as it was projected that Joseph R. Biden and Senator Kamala Harris would become the next President and Vice President of the United States of America. Now as the transition to the Biden administration begins, activists and environmentalists around the world are looking closely at Biden’s proposed climate change policy – and asking whether it goes far enough? Bianca Foley investigates the key pledges on the US climate agenda and what this means for the future of the planet.

Saturday 7th November 2020 was a momentous day in US history as, after days of painstaking vote counting, it was projected that Joseph R. Biden and Senator Kamala Harris would become the next President and Vice President of the United States of America.  Just three days earlier, the USA had made its final exit from the Paris Agreement – becoming the only national government to turn their backs on global efforts against climate change and the reduction of greenhouse gases.  But now with the prospect of a new administration reversing this move, climate activists around the world have their eyes on what the new President elect does next.

Withdrawal from the Paris Agreement was the latest in a string of changes made under the current Trump administration, including that of immigration laws, healthcare and environmental legislation, as well as giving the go-ahead for the construction of several oil pipeline projects, which had divided voters and concerned environmental activists. During the previous administration, President Obama had taken a number of administrative steps to increase regulation and enforcement of environmental protections.  These new regulations were met with objections by the Republican Congress and four years later, it appeared that President Trump was working to undo any positive changes that Obama had set in motion.

Now Biden has pledged to rejoin the Paris Agreement, along with  announcing a string of other actions to reduce the country’s climate emissions. Some say that his plans are a little average, but if enforced, will be the most dynamic climate strategy ever seen in the US. Here we take a look at some of the key pledges:

The Paris Agreement
The United States of America officially began its withdrawal from the Paris Agreement towards the end of Trump’s term, making its final exit on November 4th 2020, just one day after the election.

But what is the Paris Agreement, and why is the US withdrawing such a big deal? This landmark environmental deal, agreed to by nearly every nation in 2015, addresses the ever growing issue of climate change and includes commitments from the highest polluting nations to cut their pollution and to further strengthen those commitments over time. There are a number of reasons why it is imperative that the US rejoins the agreement.  For starters, nearly every country on the planet joined back in 2015 – breaking records by gaining 175 signatures in one day, with the US paving the way in many respects, it cannot be seen to be pulling out of the race now.  Biden’s plans to create jobs (discussed later) only solidifies the fact that being part of the Agreement will help the economy – with the US seeing a steep increase in the number of jobs in the solar industry as they seek alternatives to fossil fuels in renewable energy.

Prior to the announcement of the Democrat’s victory, Biden remarked that rejoining the Paris Agreement would be one of the first acts under his Presidency. He tweeted that “in exactly 77 days, a Biden administration will rejoin it”, giving those of us concerned with the climate crisis, a glimmer of hope.

Today, the Trump Administration officially left the Paris Climate Agreement. And in exactly 77 days, a Biden Administration will rejoin it. https://t.co/L8UJimS6v2

A Clean Energy Revolution
Biden is pledging a Clean Energy Revolution, a structural plan that culminates in the United States becoming the world’s clean energy superpower.   He believes that if as a nation they adopt a clean energy future, then the world has a greater chance of future generations surviving to experience our great planet.  He plans to “lead by example” ensuring that the US meets its target of 100% clean energy economy and net-zero emissions no later than 2050.  Biden also wants to challenge the rest of the world to step up to the plate, not only rejoining the Paris Agreement but encouraging leaders worldwide to recommit to their domestic targets.   He also plans to stand up to those polluters who abuse their power and harm those areas with a high population of people of colour or low-income communities. Using the Flint water crisis in Michigan as an example, he pledges to direct the Environmental Protection Agency (EPA) to hold those in power accountable in anti-pollution cases and ensure clean drinking water for all.

New Green Jobs
The final point in Biden’s Climate Change policy is to work with the communities and workers in industrial towns and invest in their communities to create jobs. As many coal mines and power plant workers lose their jobs through the shift to clean energy, the Biden administration is set to invest around $400 billion over 10 years to enable the US to pursue new technological advances to create jobs and further reduce emissions.

We should note that the topic of climate change isn’t new to the President Elect; way back in 1986, he introduced one of the first-ever climate change bills into the U.S. Congress, subsequently championing the Tropical Forest Conservation Act in 1998, allowing foreign governments to make agreements with the US known as a debt-for-nature swap – where one government exchanges debt relief for the conservation of their tropical forest spaces.

In comparison, Congresswoman Alexandria Ocasio-Cortez and Senator Ed Markey have co-sponsored a different viewpoint with an environmental proposal to fight inequity and challenge climate change. Similar to that of the President elect, the Green New Deal sets in motion a number of steps to make the US Carbon-neutral, but unlike Biden’s proposal, this aspires the US to have net zero carbon emissions in 10 years’ time.  The plans have been hailed by some and ridiculed by others, but no matter which side of the fence you sit, you can recognise how ambitious this task really is and understand the urgency.   The plans provide no policy information regarding reducing greenhouse gas emissions, but endorse inclusion with the point that all communities – including those from lower economic, indigenous, or communities with higher populations with people of colour – are represented in the planning process and can therefore benefit from the proposed changes.

In the weeks since the announcement of the new presidency, there have been a number of discussions and rallies, with many environmental activist groups and climate protestors putting pressure on the newly elected Biden ahead of his inauguration in January, to show that even though they support his ideals, they intend to ensure that the work gets done.

There has already been some scrutiny over some of the pre-appointment hires he has made of key staff who have connections to the oil and gas industry.  Ocasio-Cortez was seen marching alongside protestors outside the Democrat’s headquarters in Washington DC. Ocasio-Cortez echoed protesters’ cries by demanding “that the Biden administration, which I believe is decent and kind and honourable, keep their promise”.

Many see that having a President who understands the threat that climate change has to our existence is a huge opportunity and with a handful of nations announcing net zero emissions targets in recent weeks, all eyes are now on the US.  Democrats have become more united in the fight against climate change and with politicians and leaders such as Congresswoman Ocasio-Cortez and Mr Biden leading the movement, they can begin to make the changes that both plans have laid out. With the cost of renewables dropping dramatically, the US can create the jobs it so desperately needs in that sector, ensuring that not only the transition from fossil fuels to renewables is as smooth as possible, but also that the US regains its position as a key competitor in the fight against climate change.

Inspired by Nature - The 2018 CNMI Green Carpet Talent Winner Gilberto Calzolari
The Sustainable Moments Making Fashion Month 2021
Why The Key To A Sustainable Planet Is Combining Biology and Design
GCFA Italia 2019: How The Night Unfolded