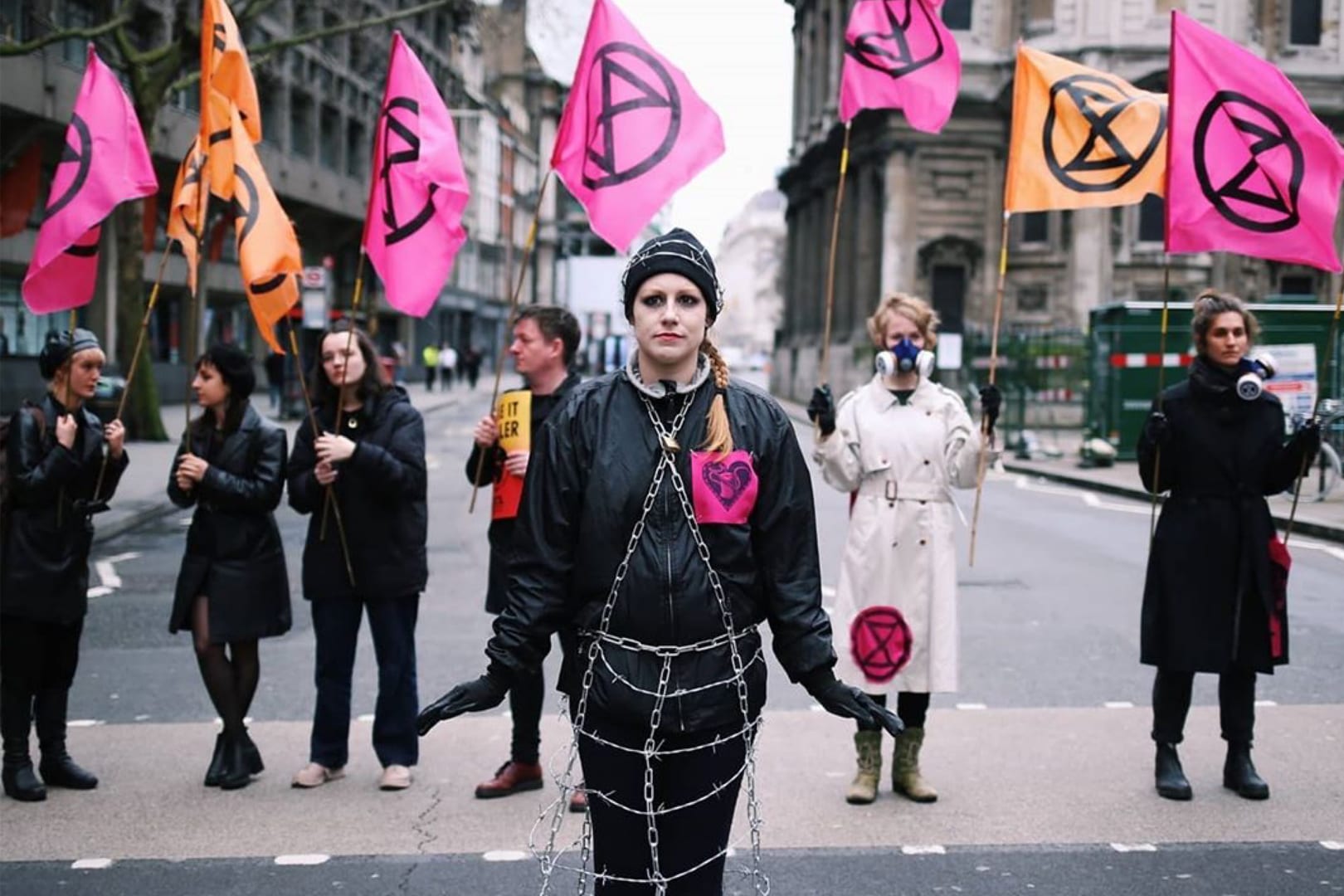 Why Climate Activism Was the Biggest Trend at London Fashion Week

This season, London Fashion Week saw the climate crisis take centre stage both on and off the catwalk. Brooke Roberts-Islam looks at the initiatives shaking up the way the industry works, and exactly what these demands for action should entail.

Following a packed month of climate change and sustainability summits in January spanning the World Economic Forum in Davos, The Future Fabrics Expo in London and the Study Hall Climate Positivity conference in New York, February showed little sign of retreat from the appeals to act against climate change. While New York fashion week rolled on with what looked like business as usual, London Fashion Week (LFW) was punctuated by activism, climate speeches, designers presenting clothing they had stolen or swapped or upcycled, and the, now seasonal, Extinction Rebellion climate protest.

Ahead of LFW on 10th February, Extinction Rebellion (XR) delivered a letter endorsed by Caryn Franklin MBE, Livia Firth of Eco-Age and among others, the founder of London Fashion Week, Lynne Franks OBE, asking the British Fashion Council (BFC) to “cancel September 2020 fashion week” and “ immediately start work on an emergency action plan that aids stakeholders through change.” Extinction Rebellion has asked the BFC to respond before September 2020 with a commitment to this transformation. While their response is as yet unknown, that wasn’t to say that the climate message didn’t manage to dominate London Fashion Week nonetheless.

On day one, the mood was set by the ON|OFF catwalk show which commenced with a speech from fashion sustainability researchers Professor Kate Fletcher and Dr. Mathilda Tham. “Climate scientists tell us that we’ve only got 10 years to change how we live, and also how we dress,” they declared. “For many years we have been dressing like we are somehow separate from the earth; as if our fate is somehow not tied to the health of the planet that is our home. But it is, and we need to change.” They also proposed that ‘Growth Logic’ should be replaced by ‘Earth Logic;’ the name of a report and manifesto they have authored as a blueprint for rooting fashion in creativity, community, curiosity, courage, and care, instead of profit. 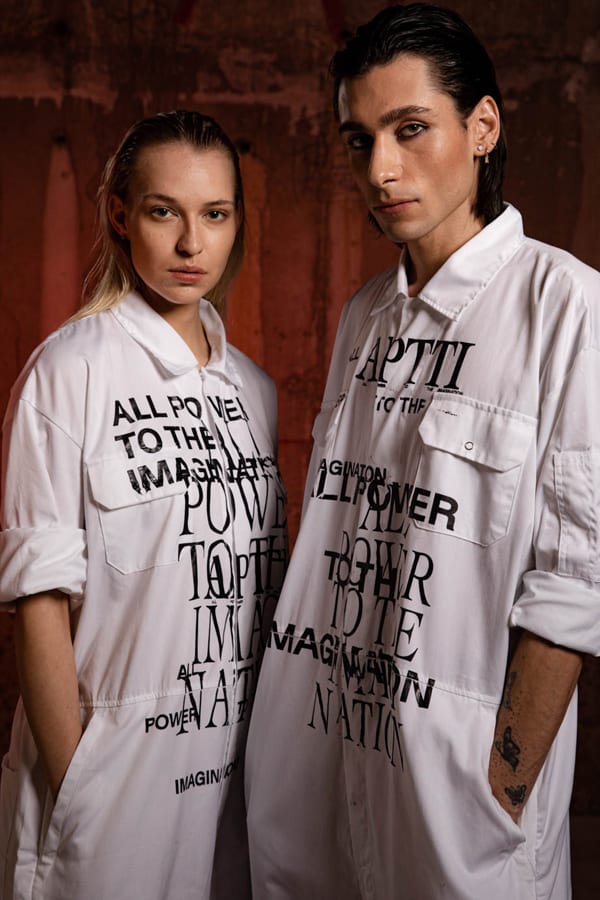 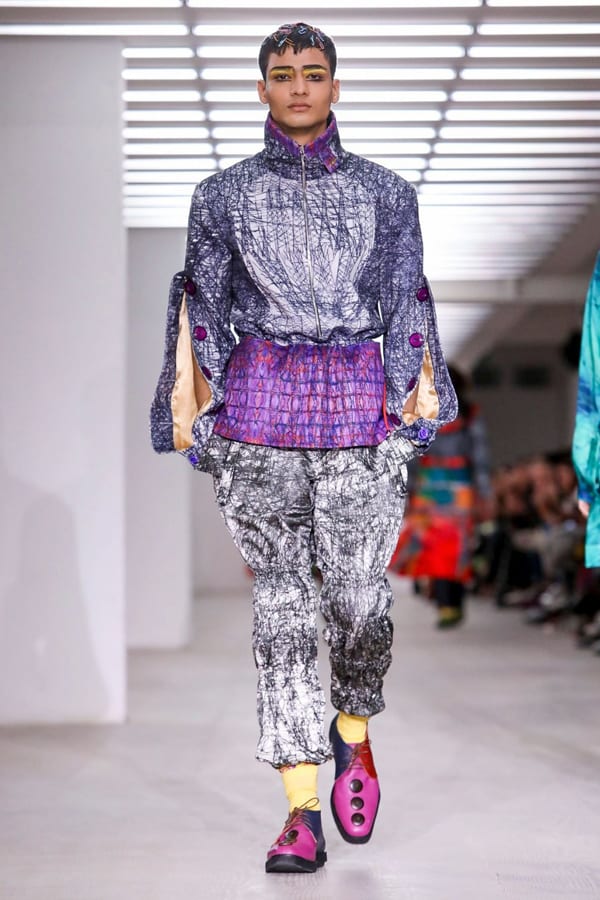 Fletcher and Tham’s speech was followed by a catwalk show entitled All Power to the Imagination. The clothes were strewn with anarchic slogans, stickers on the soles of second-hand sandals, stilettos held on with scotch tape and spewing ball gowns, painted as though they were decaying – all while models stomped down the runway to a remix of The Clash’s ‘London Calling.’ These looked like clothes for rebellion and the message felt more important than the medium (which was largely synthetic, not particularly commercial and was peddling the idea of shredding fashion rules). It felt like these designers were lashing out – and rightly so, given that they are inheriting a climate crisis and an industry painfully resistant to cleaning up its act.

During a conversation after the show with Fletcher and Tham, I asked what the desired outcome of their Earth Logic manifesto is. They are pushing for a slowing down of the fashion industry and adoption of their ‘landscapes’ for redefining and reorganising it. The full manifesto calls for changes including less growth, local scaling and re-centering of the fashion industry. I questioned whether the manifesto would deliver widespread action in an industry that is largely based in Asia (China and Bangladesh, to be specific, given that these two countries manufacture most of the clothing sold globally). Aren’t scalable, technology-based solutions needed to solve the immense problem of waste and overproduction, I asked?

Fletcher’s response was words of caution against looking to technology to solve our climate challenges. The Earth logic document states that “technology is good at reducing impacts associated with the production of material goods, but it has very real limits. Yet somehow a dream of a techno-fix still permeates society. The only solution is less stuff. There are no other options.” But won’t it take longer than a decade to convince people to buy less stuff? Fletcher thinks not, citing the smoking ban and suggesting that it sparked a swift change in public opinion and behaviour. She and Tham are touring the UK to disseminate Earth Logic and will be speaking at the Copenhagen Fashion Summit in an effort to lobby all fashion industry stakeholders to adopt their radical re-think and re-organisation of the industry. 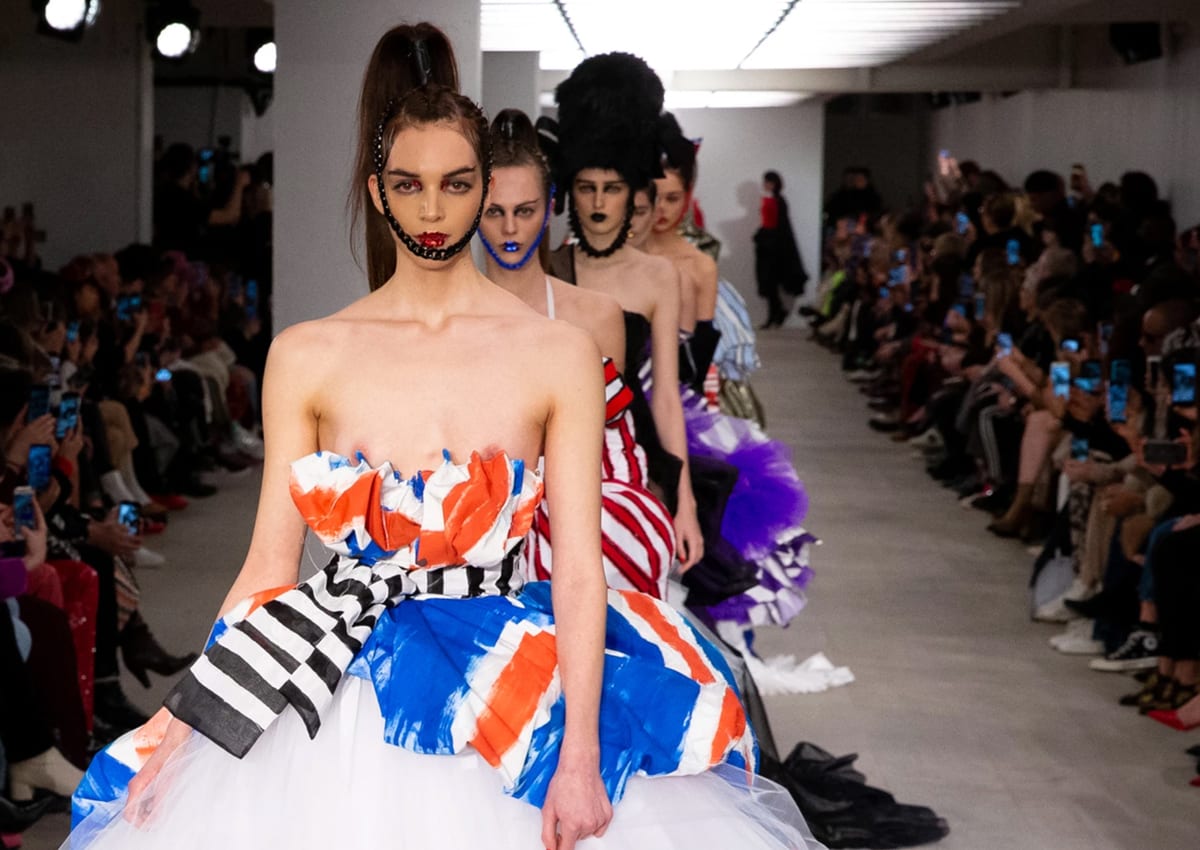 Meanwhile, day two of London Fashion Week saw the launch of Extinction Rebellion’s XR Fashion Action protest effort. This season, the protests too had a creative slant, featuring talks, block printing on second-hand clothes and music outside of the BFC’s main show venue at 180 The Strand. Their actions were bolstered by respected academics and industry veterans, including Professor Dilys Williams FRSA of the Centre for Sustainable Fashion at London College of Fashion. “We ask all involved in fashion to place earth and equality first, to respond to XR demands and to recognise those designers and fashion practitioners who create prosperity in social, ecological, cultural and economic dimensions,” stated Williams.

There is no doubt that XR is shining a spotlight on fashion and demanding that business as usual ceases, but I can’t help but ask what will replace it? What happens next if XR’s 3 Demands Bill (their core aim) is passed? The industry still needs to be transformed, but how will that be done, and by whom? In previous interviews, Sara Arnold, a pivotal member of the XR Fashion Action team, has explained that their aim is to trigger the announcement of the climate crisis by parliament, catalysing a pause in the industry so that all stakeholders can plan for, and implement, a more sustainable form of the industry. However, I would contend that it is difficult to understand how this will be structured and actioned, in practical terms. 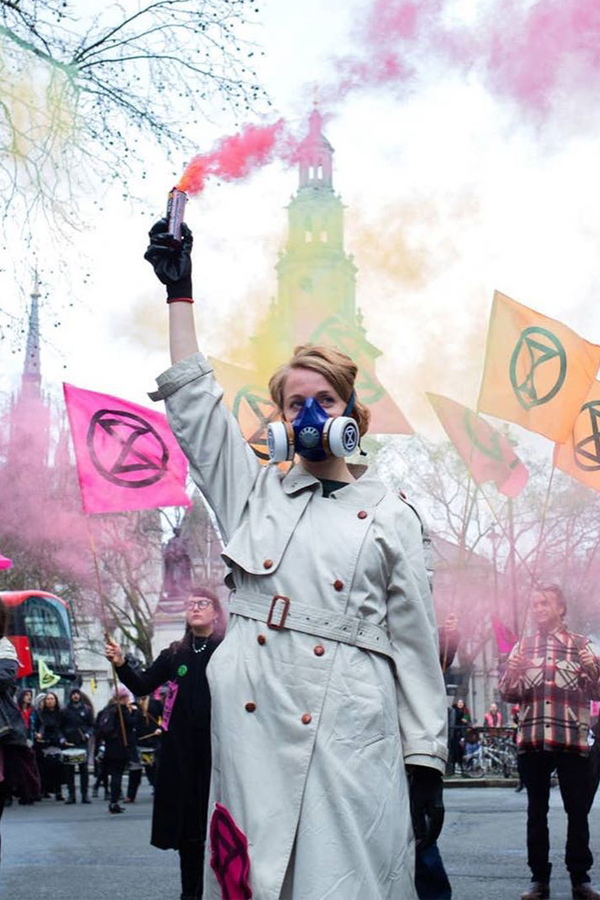 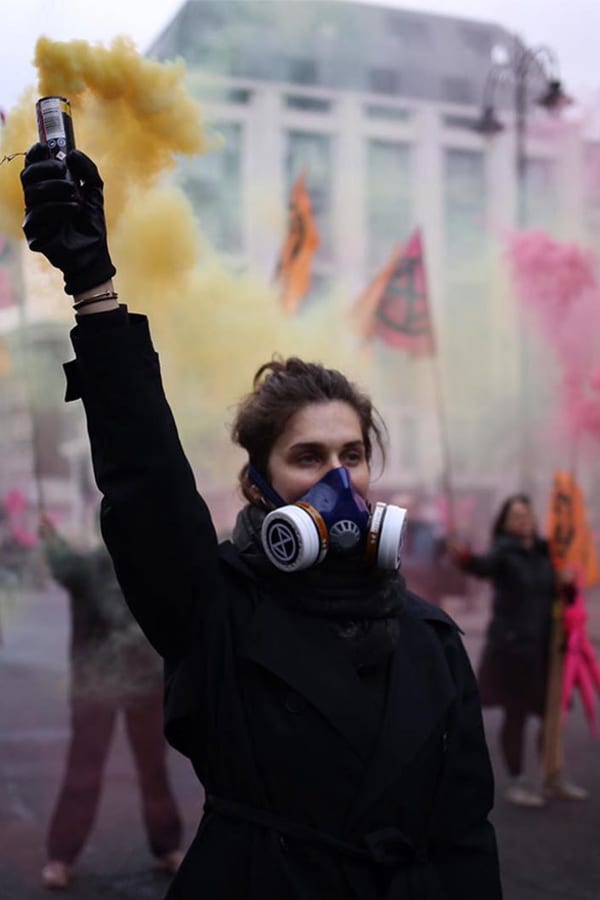 Elsewhere during London Fashion Week, Anya Hindmarch replaced her usual catwalk show or presentation with the ‘I Am A Plastic Bag’ collection and filled up her London stores with plastic bottles to make a statement on waste. Phoebe English, an up and coming designer and advocate for slow, low-impact fashion, created her collection from the leftover fabric of twelve London-based fashion design studios, including Simone Rocha. How this works for the production of the collection post-show is not immediately evident, but the use of existing materials sent out an applaudable message.

Yet perhaps most notably of all, the main BFC showroom space at 180 The Strand that was once a vast trade show of brands presenting collections to buyers this year became a paired-back ‘Positive Fashion’ showcase. While still a commercial brand space, it was filled with labels claiming a facet of sustainability in their offering. What was also new this season was the prominent positioning of young emerging designers who are operating under sustainable business models that integrate swapping (Patrick McDowell), upcycling (Sophie Hird) and repurposed deadstock (Duran Lantink). Although not immediately scalable, they had the fashion week audience engaged and talking, both in-person and online via Instagram. Their endeavours served to show that the fashion crowd’s appetite for something new is not related to seasonal silhouettes and colour palettes, but the business model and consumption methods of fashion.

With the global narrative around sustainability and climate change imperatives rising, it is difficult to imagine a fashion week without the growing sustainability narrative taking centre stage, powered by designers making a stand and activists demanding change. Business as usual looks less likely for the seasons ahead – All power to the Imagination indeed!

Read our interview with Patrick McDowell on being a designer in a changing climate.