If you’re looking for a spectacular narrative, one that follows the twists and turns of globalization and governs the flow of human and natural capital and wealth, look no further than fashion.

No sector tells the tale of globalization quite like apparel, and no people tell the truth about globalization like those in the fashion industry – from cotton growers to garment makers (when they are listened to, which is rare), to the sourcing agents that scour the world in search of the cheapest prices, to the shippers and merchandisers. Because this is a story of inputs from across the globe. A design might come together in Scandinavia only to be “made” in Vietnam from cotton grown in Pakistan, housed in Dubai with metal fasteners produced in China. The variables are endless but one thing is for certain: fashion is on the frontline of globalization.

It also – please forgive me, trade experts – adds a rather more exciting dimension to the story of globalization (which is inevitably one of trade rules and regulations) than, say, a hefty debate on tariff retaliation.

We all own clothes, so fashion makes talking about globalization both palatable and gives it an immediacy and relevance. We should use this to spark a much-needed debate on a topic we should all be concerned about: how globalization came to fail so many people.

The cheerleaders of free trade have, by and large, failed to get to grips with a widespread and growing backlash against globalization. That’s because for a long time, they’ve viewed us as a homogenized mass of consumers rather than active citizens. From their perspective, we’ve got it all. When it comes to fashion, for example, we have access to an endless variety of cheap clothes. What more could a consumer want?

The reality, though, is very different. This approach is unsustainable both for the industry and consumers. To understand why, let’s take a little look at the history of the fashion industry and globalization.

What we’re seeing today really started in 2005, with the end of the Multifibre Arrangement. Although the fashion industry has always been globalized, and outsourcing of production has been happening since the 1980s, the end of this arrangement really accelerated the process, bringing it to an unprecedented scale.

As industry expert Robert Antoshak put it recently, from 2005, “sourcing companies dashed around the world finding ever-cheaper producers of textiles and apparel”. And what about those people who relied on these jobs? “Folks will be better off working in finance and tech … US trade negotiators reassured us. They’ll get paid more and have more opportunities,” Antoshak recalls. We all know how well that turned out. 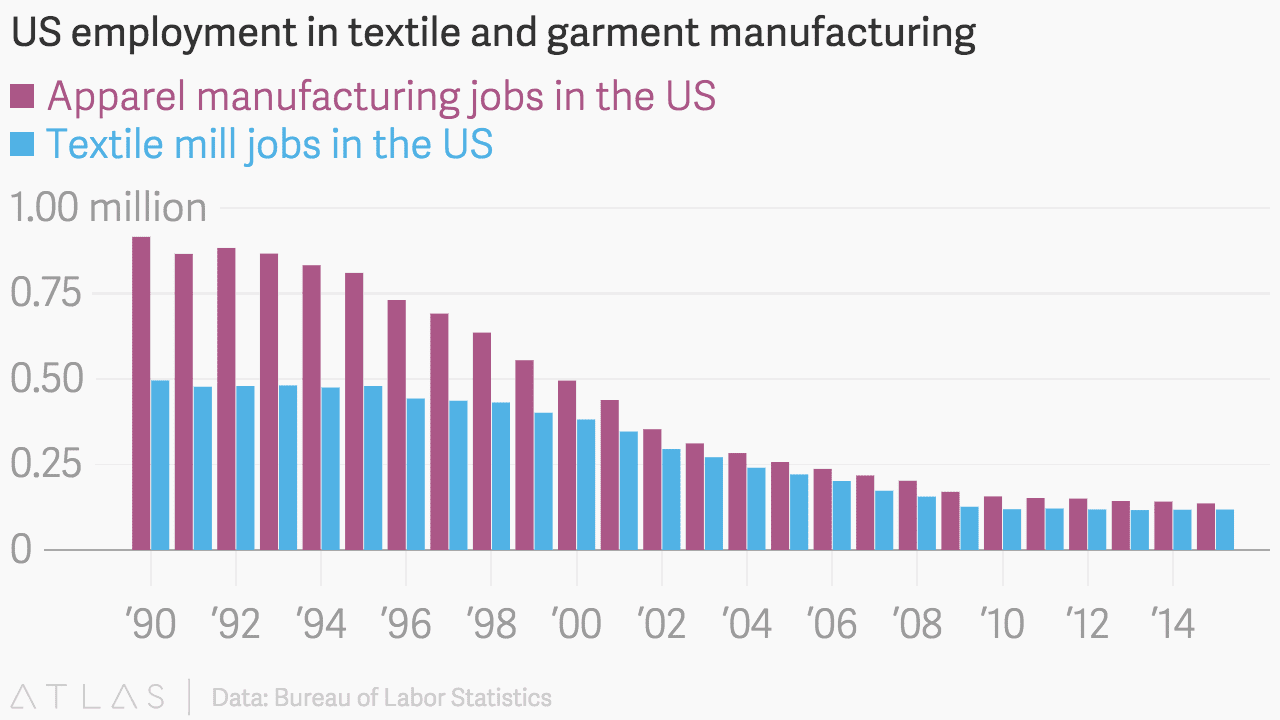 Dying in the name of fast fashion

There is still a tendency among some economists and analysts to insist that people are only against globalization because the benefits haven’t been properly communicated: if only we could understand that this was all being done in our interests.

I have a really hard time believing this. Try talking to some of the apparent beneficiaries of free trade: the garment workers of Bangladesh, for example. On paper – including the growing volume of corporate social responsibility reports of fast fashion brands – these young women are the beneficiaries of globalization. The factories in Dhaka have afforded them the opportunities to flee rural areas, where they endured all types of privation, and earn a wage for the first time.

The concept of young women having access and control of their own money, and the opportunity to access a career, is of course important. But look more closely at the reality of these “opportunities”. The young women creating our fast fashion are treated as an expendable resource.

Perhaps the most notorious example of this is the Rana Plaza disaster, when a garment factory collapsed. Over 1,000 women were killed, and thousands more injured – the so-called beneficiaries of globalization. If the conditions in which they were working had been decent, the incident would never have happened.

After this catastrophe, survivors had no choice but to go back into the system and enter other unsafe factories. Yes, I have met women who watched their friends die in the rubble of Rana Plaza only to have to go into factories the following week, terrified at any moment that this next building would fall.

The architects of globalization have frankly failed to make good on their much-touted claim to increase opportunity for women. These women have been afforded no buffer, no career progression, no support and no substantive change. On many occasions the effects of globalization (intended and unintended, direct and indirect) have actually put them in harm’s way.

And this keeps on going all over the world – from Cambodia to Myanmar to Ethiopia, as the blueprint for outsourced fast fashion is aggressively exported to new “host” economies.

Luckily for my industry, it’s not all doom and gloom. I’m heartened by a rising crop of innovative models and proactive intervention that accept the globalized nature of the fashion industry and the opportunities that exist for women in developing economies, but which at the same time are nuanced and intelligent enough to make sure everyone can benefit. I call it invested globalization.

I know it’s unfair to single out particular projects, but I want to give you a flavour of what this new type of globalization looks like.

Take, for example, the work of Lauren Solomon at Queensland University of Technology in Australia. Recognizing that the Cambodian garment industry has become a breeding ground for exploitation, Solomon works on positive intervention in the supply chain, working directly with the garment workers. She has partnered with Cambodia’s largest garment worker trade union to deliver a training programme that teaches garment workers transferable skills, which they can then teach to other workers, helping to empower hundreds if not thousands more women. Such an initiative is almost unique in today’s garment industry.

Then there is entrepreneur Leah Rodriguez from the UK, who has set up Holi studios in Siem Reap, a fashion production building with natural light flooding onto the work surfaces and air conditioning. Many of Leah’s seamstresses came from sweatshops, including the factory manager, Li, who was previously branded a trouble maker for pushing for better conditions. Leah doesn’t describe Holi – which now manufactures for a number of brands – as an ethical production facility, because she thinks all fashion production should involve fair wages and safe facilities.

These are only two examples of invested globalization, both of which have led to positive intervention in the supply chain by working directly with the garment workers – these real, breathing human beings who are just like us.

If such human stories were truly replicated worldwide – as they can be – then the current plight of millions of women still enslaved in the supply chain as a result of globalization could be transformed.

I think this should be our overarching goal.

9 Children’s Movies to Inspire Future Climate Activists
Feed Your Mind... Candy
How To Get Started With Plastic-Free July
With Love From... Bristol
Social justice